OPINION: Macron May Have Won the French Election, but Le Pen Was Victorious

Nickels: Le Pen is nothing less than a Jeanne d’Arc, fighting the no-borders globalists. 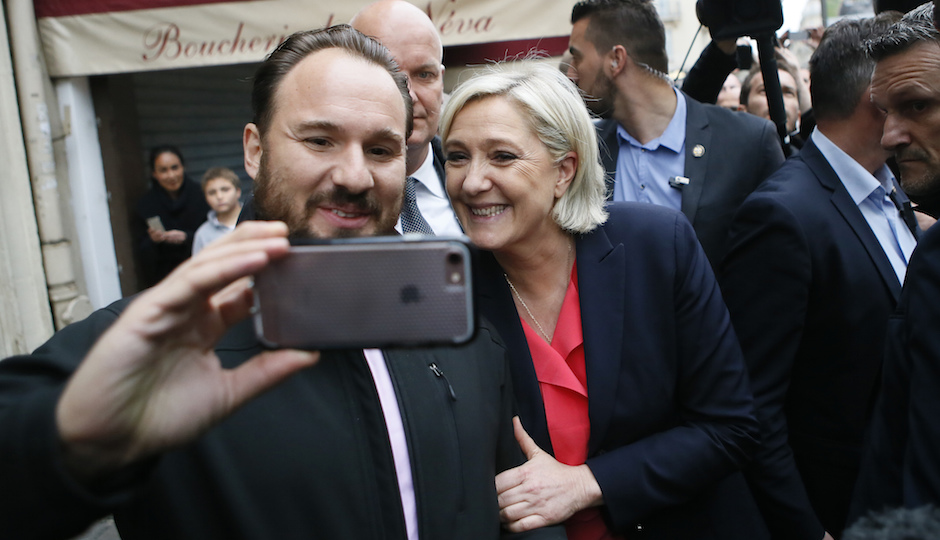 French presidential candidate Marine Le Pen poses for a selfie as she leaves her campaign headquarters Sunday, May 7, 2017 in Paris. | AP Photo/Francois Mori

When Marine Le Pen lost her bid to become the next president of France, many Americans saw former investment banker Emmanuel Macron’s victory as that country’s rejection of a Donald Trump–like candidate. If the comments on Facebook were any indication, Le Pen for these Americans was a “far right” candidate every bit as dangerous as the current administration in Washington.

Of course, the media’s labeling of Le Pen as a far-right candidate was an attempt to scare people into not voting for her. It was much like calling someone a racist so that people will no longer pay attention to the one who has been labeled.

Le Pen’s popularity can be traced to a tide of resentment in France that’s been rising over mass immigration. France is not the same country that it was 20 years ago. It is three black holes and a universe away from what it was in Vincent Minnelli’s quaint portrayal in the film Gigi, and it no longer resembles the Paris of the Café de Flore, where Picasso, Sartre, and Hemingway sat around drinking glasses of Pouilly-Fumé.

The whole of France is now a battlefield. In the 21st century alone, there have been 30 terrorist attacks in the country, all of them Islamist and most accompanied by the phrase “Allahu Akbar.” Some French families, tired of the lawlessness and attacks they witness on the streets, are migrating to the States. They see the future of France. Many are convinced that the noble country of Rousseau and Molière will become an Islamist state. The writing is on the wall.

Paris has become the epicenter of the New France, thanks mainly to massive immigration. You only have to walk to the Jardins d’Éole, a large public park in Paris that’s become a massive squatting camp of illegal migrants waiting to be transported to Britain, to see that something radical and fearsome has taken place — it’s been designated as a major no-go zone for tourists and Parisians both. The same scene is repeated at Grande-Synthe, near the port of Dunkirk, which holds 2,500 illegal migrants and like d’Éole has been described as squalid, violent, and dangerous.

It has been observed by many critics of mass immigration that many Middle Eastern immigrants generally have no wish to adopt French customs and traditions. Assimilation, which usually occurs in second or third generations of immigrants, is not happening. The 48-year-old Le Pen, a twice-divorced single mother and the youngest daughter of the truly far-right and anti-Semitic Jean-Marie Le Pen (whose polices she has publicly disavowed), felt called to change her country’s downward spiral. Le Pen is nothing less than a Jeanne d’Arc, fighting the no-borders, multiculturalist globalists who want French identity hammered down to the size of an American dime.

According to the International Organization for Migration, immigration in France increased by 84 percent between 2002 and 2012, and thousands of immigrants are still making their way into Europe. More than 204,000 migrants, for instance, arrived in Europe for the first five months of 2016.

In her campaign speeches, Le Pen promised to enforce France’s ban on organizations linked to Islamic fundamentalism and wanted to deport all foreigners with dual citizenship linked to Islamic fundamentalism. In her campaign literature, Le Pen stated that Macron, who supports massive immigration, is against the deportation of suspected Islamic terrorists; instead, Macron believes that “tracking” terrorists is enough. (Enough, that is, until the next terrorist attack.) Macron may be France’s new president, but he has not won the hearts and minds of the people. Cuts to the public sector under his watch as economic minister have been seen as troubling. Stupidly, he has often proclaimed that terrorism in the 21st century is not the province of a single religion, although he goes mute when it comes to citing bombings by Catholic anarchists or angry Amish men with pitchforks.

Despite Emmanuel Macron’s impressive win on May 7th, Marine Le Pen has already won a huge victory: She has normalized ideas that would have been forbidden to be taken seriously only a few years ago.

As Aamna Mohdin wrote in Quartz, “While globalists celebrate, Le Pen will be biding her time, content in the knowledge that she has already swayed the country toward her vision.”