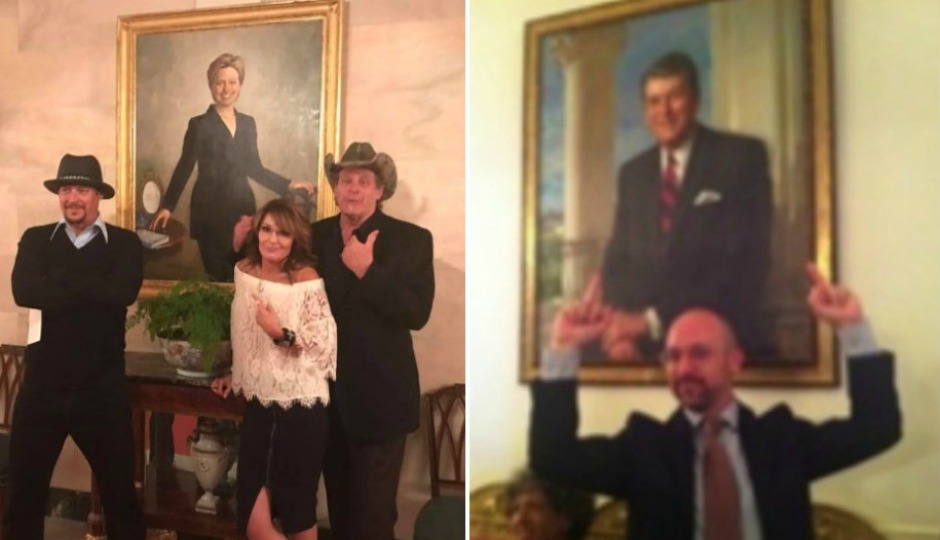 Much is being made of the controversial photo of Sarah Palin, Kid Rock and Ted Nugent mocking a Hillary Clinton portrait during their visit with Donald Trump this week at the White House. But they were downright civil compared to a couple of Philadelphians.

Back in June 2012, a group of gay Philadelphians attended the White House’s first-ever gay pride reception.

While they were strolling through the White House corridors, they decided to pose for photos with the portrait of Ronald Reagan, who was no friend to the gay community during his presidency.

And so, Hart and Strauss gave the Reagan portrait the finger. Segal, who was a bit more aware of the hallowed ground on which he stood, made his point without getting vulgar.

Strauss shared some of the images on her public social media stream, and Philly Mag published them along with this story.

“It’s not a gesture that I would use in the White House when representing our city and our community,” Segal told us of the middle finger photos when we asked him about them back then. “I have friends who work in that building. I’m not going to do something that could embarrass them or that could somehow damage a campaign that is so important. ‘Be on your best behavior,’ my staff told me.’ I think they know me too well.”

In other words, Segal wanted to be invited back to the White House.

Our story and the photos went national after they were picked up by huge right-wing site the Drudge Report, and the White House was soon to respond to our story.

“While the White House does not control the conduct of guests at receptions, we certainly expect that all attendees conduct themselves in a respectful manner,” wrote the White House in a statement. “Most all do. These individuals clearly did not. Behavior like this doesn’t belong anywhere, least of all in the White House.”

As for the Palin-Nugent-Kid Rock photos, they’re downright tame. Point being, if you want to insult someone, be sure to invite a Philadelphian.