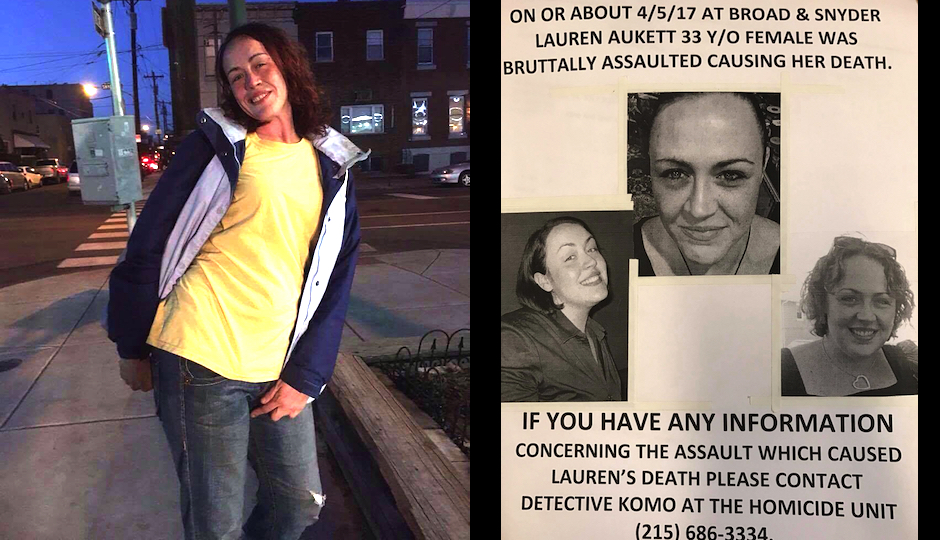 Left: The most recent photo of Lauren Aukett, taken three weeks ago. Right: One of the flyers her family has been distributing in South Philly. (Images courtesy Carolynn Aukett-Belgiorno)

The family of South Philadelphia woman Lauren Aukett is asking for the public’s help to identify the person or people responsible for her brutal murder. The 33-year-old mother of three was found unconscious outside South Philadelphia High School on the morning of April 5th. She died ten days later from her injuries.

“She was so intelligent and generous,” says Aukett’s sister, Carolynn Aukett-Belgiorno, a paralegal with Kline & Specter. “She was always helping people with things, and she loved SAT words, Shakespeare and poetry. And she had sarcasm down to an art form.”

Aukett, whose children range in age from 6 to 14, was found by school police around 6:30 a.m. that Wednesday. She was transported to Jefferson University Hospital with severe brain damage and numerous cuts, lacerations, and other injuries to her head and other parts of her body.

She wasn’t identified until April 12th, a full week later. After learning of her bleak prognosis, Aukett’s family had her removed from life support on April 14th, and she died the next day. She would have been 34 years old on May 2nd.

According to Aukett’s family, she was homeless, and they believe that she was sleeping outside of the school when she was attacked. Aukett-Belgiorno says that her sister was full of promise until she got caught up in drugs — first crack, then heroin — a few years ago.

“She graduated from the Academy of Notre Dame de Namur as an honor student,” says Aukett-Belgiorno. “And she was doing really well. But these drugs are a full-blown epidemic. She was trying to get her life together. She really was.”

While many 33-year-olds living in South Philadelphia are transplants these days, Aukett had lived there her whole life. She was born on the 800 block of McClellan Street before the family moved to Front and Sigel. Before becoming homeless, she married and lived at 9th and Morris.

Aukett-Belgiorno says she was told by police that while there are surveillance cameras outside the school, the one that might have caught the assault was not working at the time. She adds that police also told her that a person was seen on another camera at the school but that the image was too blurry. 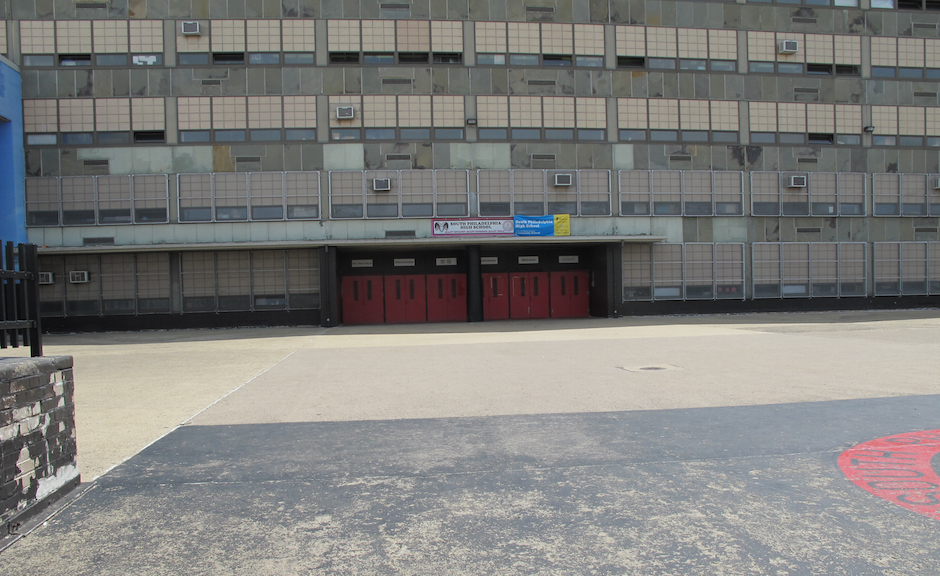 The area of South Philadelphia High School where Aukett was found, along Broad Street closest to Jackson Street. (Photo by Megan Sawey)

Aukett’s niece, Dominique DeMichele, has been handing out flyers in South Philadelphia, hoping to find someone with information.

“Think about if this happened to your mom, sister, aunt or child,” DeMichele tells Philly Mag. “You would want someone to come forward to help find the person responsible. Knowing that this person is off the street and cannot hurt anyone else will help bring Lauren peace. She needs to be able to rest in peace. She has suffered enough.”

The family has scheduled a vigil for Wednesday night at 6 p.m. in the parking lot of South Philadelphia High School at Broad and Snyder.

Anyone with information on the crime is asked to call Detective Komorowski in the Homicide Unit at 215-686-3334. Anonymous tips can be submitted via this form.

“I just hope that the person or persons are brought to justice so that this does not happen to another human being,” says Aukett’s sister. “We also want to bring closure to her children.”

A funeral mass will be held on April 28th at 10 a.m. at St. Nicholas of Tolentine on Watkins Street.