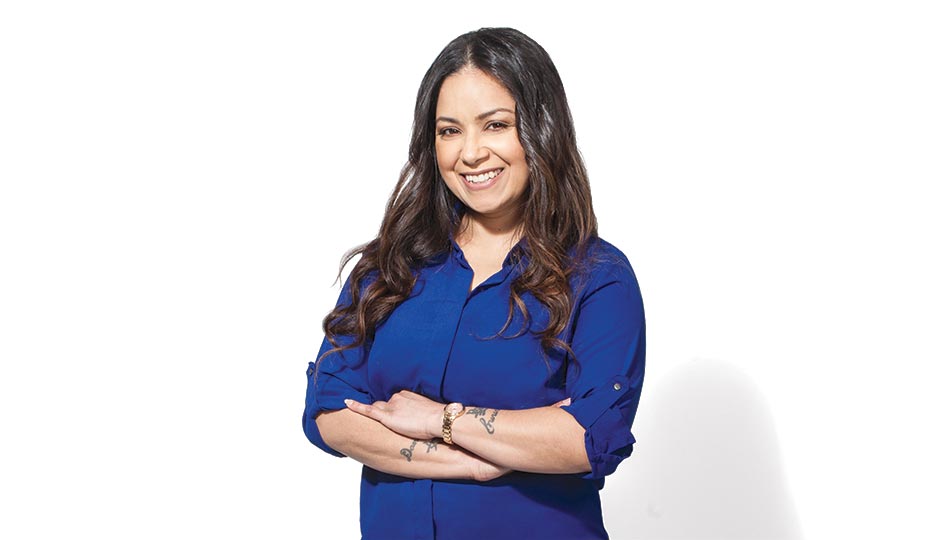 When did you first realize you loved to cook?
When I was a kid. My mother and I would watch Julia Child together on Saturdays. We’d jot down a recipe, go to the market and get all the ingredients, and then run home and make it together. My mom was big on cooking Italian and Greek food, but my grandmother taught me the foundation of cooking Puerto Rican food.

You spent 10 years on the police force. How did you end up there?
I joined in 2002. I had just graduated from Temple University with a degree in Latin American studies, and I wanted to become an FBI agent. I took the test for the FBI but didn’t pass, and someone suggested I should become a police officer to get some investigative experience and then maybe reapply.

How’d you go from working patrol to being on TV?
Chopped was my favorite show, and in 2012 I saw that they were casting for a special themed episode for creative moms, called “Momumental.” I applied and got called in for an audition. A month later, they asked me to be on the show. I Latin-ized every dish I made, and I won the competition!

What made you decide to make a career switch?
It was a calling to leave the police department and move on to another career where people would appreciate what I have to offer. I’m bilingual. I have a bachelor’s degree, a master’s in psychology, and a post-baccalaureate paralegal certification in civil litigation. But I never scored high enough on promotional tests to get promoted, and that raised red flags for me. I wanted to see myself advance.

What did your friends in the department think?
The million-dollar question was, “Oh my God, what about your pension?” Being happy at the end of the day is more important than money. I wanted to say, “Come with me! There’s life on the other side! Join my revolution! You don’t have to be stuck here just for a pension.”

Then you ended up back on Chopped.
They called me back in 2014 for the Chopped Ultimate Champions tournament. You compete against amateurs, professionals and celebrities. I was the first Latina to win a tournament.

Did you feel any pressure competing against professional chefs?
It was intimidating. You’re faced with split-second decisions, and your heart’s racing. I tried to remain calm and listen to my intuition. That was the same approach I took as a cop. I’d been in some scary situations, like being in a citywide assist where my partner and I were outnumbered by an angry crowd and our patrol car died.

What was your prize for winning the tournament?
Fifty thousand dollars and a brand-new car. A month before I got called to do the tournament, there was a snowstorm, and a lot of my [private chef] jobs were canceled. It set me back; I was behind on my rent, and my car was repossessed. When I found out the show was offering a car, I thought, “This is the car I’m asking the universe to bring me.” At that point, I knew all those contestants were going down. I even beat out Laila Ali.

A happy ending, then?
I decided to invest my money in my own food truck — Diana’s Latina Cantina. But the truck was in disrepair, and I had to sue the guy who owned it.

How’d you bounce back?
I met [Toasted Walnut Bar & Kitchen owner] Denise Cohen. She was looking for an executive chef, and she liked my food and my creativity. So here I am — the newest addition to the Gayborhood.