Are Philly-area millennials finally getting involved in the rough-and-tumble of local politics? God, we hope so. 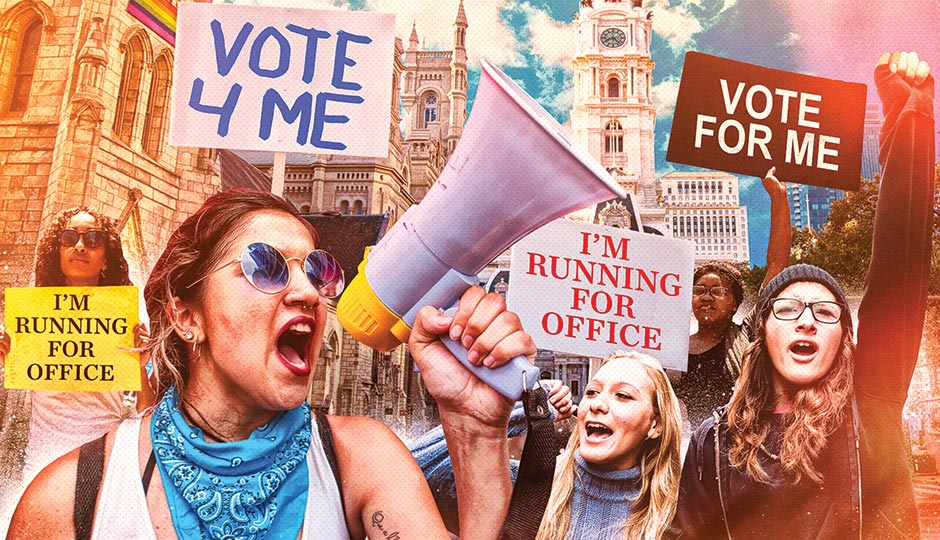 Something is happening in this city.

For years, many Philadelphians took democracy for granted. A pathetic 27 percent of registered voters cast ballots in the 2015 primary race. Only 89,000 people — out of the city’s roughly 1.2 million voting-age citizens — picked our current district attorney. The fact that voters don’t even have a choice in many City Council and state legislative races, thanks to one-party rule, has long been met with a shrug. Then came November 8th. Now, protests spontaneously break out in the streets and at the airport. Every Tuesday, a group founded by seven local women airs grievances outside Senator Pat Toomey’s Center City office. If that doesn’t convince you the wind may be blowing in a different direction, consider the fact that 800 people packed a downtown church in January to talk about gerrymandering. Gerrymandering!

There are signs that the improbable election of President Donald Trump may even inspire the least engaged among us — millennials — to do one of the most democratic things of all. Young Involved Philadelphia, a club of bourgeois do-gooders, scheduled a workshop in November to teach people how to run for office. Before Election Day, there were 30 registrations; afterward, 275 people swarmed the event. A stunning 600 more, most of whom were young, attended other trainings this year for those who want to campaign for election-board worker and committee person.

Harold Mesa is one of those millennials. The Port Richmond resident is originally from Colombia. “Since becoming a citizen, I’ve always voted,” he says. “But after Trump’s election, it really started to click that — excuse my language — oh shit, this is fucking real. Sitting on sidelines and liking things on Facebook isn’t enough. We have to get on the ground.” Mesa plans to run for Democratic committee person in 2018, and five of his friends are thinking about joining him on the ballot.

If young people really, truly run, it will be a major break from the status quo. There are no millennials in Philadelphia’s Congressional delegation or on City Council, and Jim Kenney is the oldest first-term mayor in the city in at least 65 years. Young people today — like those in previous generations — also vote less than any other age group. This has led to a dearth of new ideas in local government and a pitifully shallow bench for Philadelphia’s Democratic Party.

Shauna Shames, author of Out of the Running: Why Millennials Reject Political Careers and Why It Matters, interviewed graduate students at elite colleges like Harvard and Suffolk University to find out why so few young people were running for office (in the pre-Trump era, at least). It’s not that they don’t care about changing the world, she says — quite the opposite. Most of them believe that politics is one of the least effective ways to do that. Who can blame them? “We, as Americans, have lost trust in most of our major institutions. It goes back to Watergate and Vietnam,” Shames says. “Today we have Congressional gridlock and the [Catholic] Church’s sex-abuse scandal, and Philly is remarkably corrupt.”

Many would-be local candidates told me the same thing. Civic activists badly wanted Omar Woodard, a 33-year-old dynamo who’s worked in academia, on a mayoral campaign and in venture capital, to run for state Senate in 2016. He toyed with the idea for a while. But in the end, he instead took a job leading an antipoverty nonprofit. “I thought I could get more done there,” he admits.

Shames says women — and women of color in particular — are most likely to think politics isn’t worth it, largely because they expect to face an onslaught of discrimination on the campaign trail.

But Trump’s victory might have changed the calculus. “When democracy is threatened, it makes people evaluate their participation differently,” Shames says. “I’m optimistic, actually, about the coming era. I hope we learn that democracy is not a spectator sport.” If Trump’s presidency is as bad as some commentators predict — his authoritarian impulses seem real and terrifying — the future of our country may depend on whether young people realize just how desperately America needs them.

Published as “Metropolis: Spectators No More” in the March 2017 issue of Philadelphia magazine.