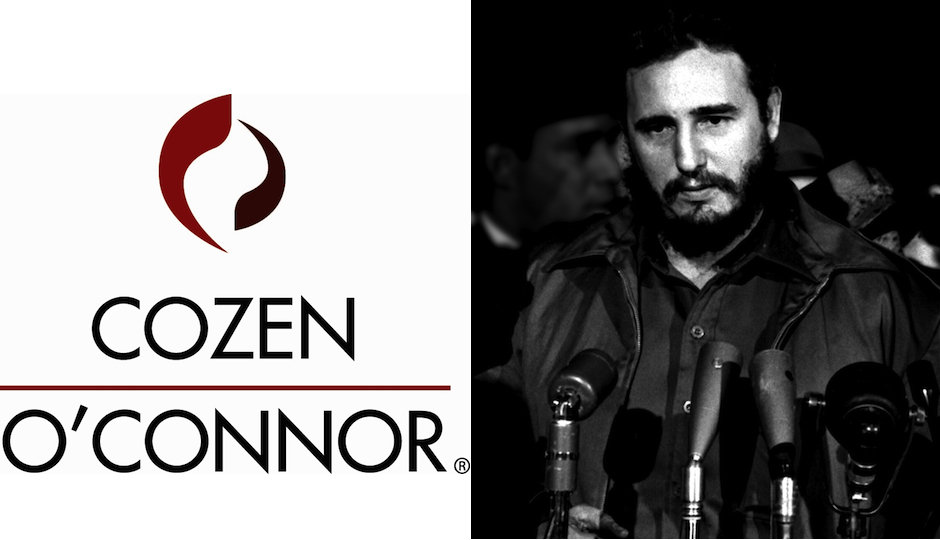 It’s not every day that one of Philadelphia’s most prominent law firms files a suit against the United States Department of Justice, so we definitely took note of the action that Cozen O’Connor just filed.

The Center City firm, which has offices in 23 cities, has just sued the DOJ in a matter that involves Fidel Castro, Cuba, and $253 million. Naturally, with any story that involves such things, a bit of a history lesson is in order.

Rafael del Pino Siero was good friends with Castro when the two were students at the University of Havana, where Castro obtained his law degree in 1950. But after university, their relationship took a different turn, once del Pino Siero became suspicious that Castro was a Communist. Del Pino Siero, a pilot, began helping Cubans flee the country in his plane.

After Castro took power, del Pino Siero was arrested as a political dissident. He was tortured and eventually died in prison in 1977. He left behind two children, who became United States citizens.

Fast-forward to 2005. Del Pino Siero’s children filed a wrongful death suit in Florida against the Castro regime. A jury sided with the family, and a judgment of nearly $253 million was entered in favor of them.

Of course, collecting $253 million from a country such as Cuba is no easy task. According to Cozen O’Connor’s suit, filed this week in federal court, the Cuban government is very good at keeping its assets out of the reach of judgments like this one.

But in 2014, international bank BNP Paribas pleaded guilty to illegally processing billions of dollars in financial transactions for countries under U.S. economic sanctions, including Cuba. The bank agreed to forfeit over $8 billion as part of its agreement with the Department of Justice.

And so, Cozen O’Connor decided to go after some of that forfeited money in order to satisfy the judgment obtained by the del Pino children. According to the new lawsuit, the DOJ said no, and Cozen O’Connor filed Freedom of Information Act requests with the DOJ for more information. To date, says the law firm, DOJ hasn’t come through.

Cozen O’Connor’s suit accuses the DOJ of violating FOIA laws and asks that the court order the DOJ to produce the relevant documents.

The DOJ has yet to respond to our request for comment on the case. We hear they have their hands full.