After the renovation Villanova's basketball gym will be renamed the Finneran Pavilion, after 1963 grad William Finneran. 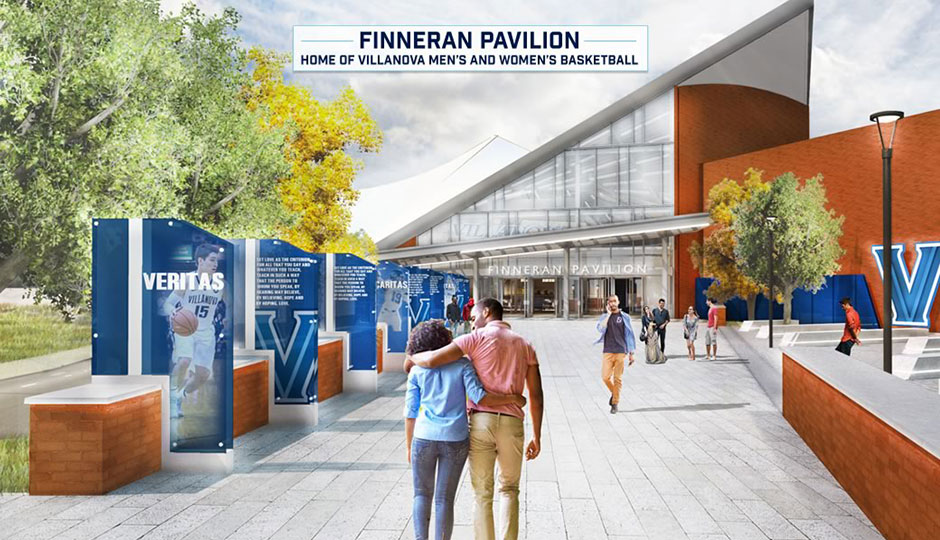 Villanova’s Board of Trustees on Wednesday approved a $60 million makeover of the Pavilion, the team’s basketball gym. After the renovation, it will be rechristened the Finneran Pavilion, after 1963 grad William Finneran. He donated $22.6 million to the renovation efforts last year.

“With the renovation and opening of the Finneran Pavilion, Villanova will have an on-campus home that embraces the incredible tradition of our University and its basketball programs,” Villanova men’s basketball coach Jay Wright said in a release. “The Finneran Pavilion will be a gathering place in which the Nova Nation can take great pride, and its impact will be felt on our program for years to come. I am grateful for the leadership of the Board of Trustees and President Donohue and the generosity of the donors, led by Bill Finneran. We can’t wait to get started!”

The Pavilion opened in 1985. It was originally named the du Pont Pavilion, after John du Pont, an heir to the family fortune who donated money for the building’s construction. His name was stripped off the building after he murdered wrestler Dave Schultz. John du Pont actually never gave Villanova the full $5 million he promised for construction of the Pavilion. He stopped making payments (after giving between $500,000 and $1 million) when the school dropped its wrestling team, which he had founded and coached.

“The majority of my coaching career I have called the Pavilion home and, like any home after 31 years, it is in need of an update,” women’s basketball coach Harry Perretta said in the release. “The Pavilion and the events that take place there mean a great deal to the Villanova community and I am thrilled that this renovation has been made a priority for the University and Villanova Athletics. I look forward to seeing it come to fruition and playing our first game in the Finneran Pavilion.”

The Pavilion has always been a weird venue. Daily News college hoops writer Dick Jerardi calls it the “Ski Lodge.” A former Daily News writer, ESPN’s Dana O’Neil, said it was only the fifth-best arena in the Big East: “The weird layout — too high ceilings for good acoustics (officially called a hyperbolic paraboloid roofline), an empty space used for indoor baseball training that sits behind the student section — plus the wine-and-brie season ticket-holding fan base don’t exactly add up to an intimidating atmosphere.”

Villanova has hired Philadelphia architects EwingCole to assist with the complete renovation of the gym, which is still in its early planning stages. The firm worked on MetLife Stadium in North Jersey and Drexel’s well-received recreation center. It also did the Family Court building in Center City, which was not so well received.

There are no concrete plans for what the building will look like after the renovations, which will begin in June. The school says after designs are drafted and approved, “a deliberate process — with thoughtful consideration given to students, current season ticket holders, donors and alumni — will begin this spring and the details will be shared when finalized.”

The renovations are expected to be finished in time for the 2018–19 basketball season. The Villanova men’s team is expected to play most of its games at the Wells Fargo Center next season, with selected games at other local venues when there is a conflict. The women’s team will play at the Jake Nevin Field House, built in 1932.

The Philadelphia Freedoms tennis team, which has held its matches at the Pavilion since 2010, announced last month it would be holding its 2017 season at the Michael J. Hagan Arena, Saint Joseph’s basketball gym.