Shop Your Property Taxes Away

Some New Jersey townships offer property tax rebates for residents who shop locally. Could this catch on? 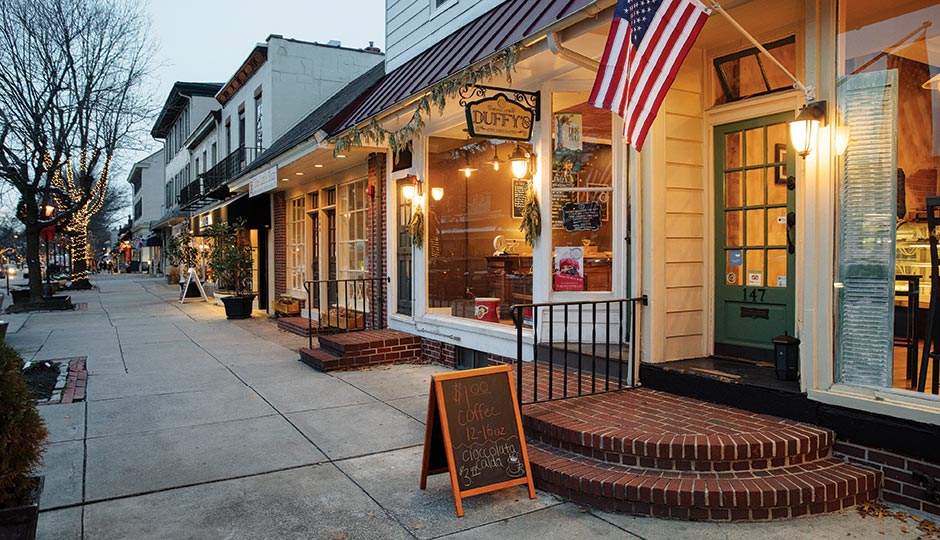 Duffy’s Fine Chocolates, one of the Haddonfield businesses in a new property tax program. Photograph by Gene Smirnov

On a sidewalk bench in Haddonfield, across Kings Highway from the Bistro, two frosty-haired high-heeled ladies are locked in perpetual conversation. Cast in bronze — the work of sculptor Seward Johnson — they sit day and night. It was raining steadily when I first encountered them in January. And while I couldn’t hear what they were saying, I felt certain they were trading notes on how much they planned to lower their property tax bills this year just by shopping in downtown Haddonfield.

In November, before the holiday retail season, borough officials announced the new Shop Haddonfield property tax reward program. It’s meant to encourage residents to patronize local businesses by essentially lowering their property taxes without costing the township a dime. How it works is simple — sort of. When residents buy something at a participating downtown shop or restaurant, they swipe their “property tax reward card” to receive a discount. But rather than collecting the savings on the spot, they get a credit against their property tax bill. Businesses choose whether to participate and set their own discount rates. Most hover between five and 10 percent.

The Partnership for Haddonfield, the corporation that manages the local business improvement district, felt it needed at least a dozen businesses in order to launch the program, says Haddonfield mayor Jeff Kasko. It signed up 20 right off the bat.

To some business owners, the reward program is a no-brainer — even though the money comes out of their own pockets. Rob Everitt, who gives a 10 percent discount for shoppers at Community Bikes and Boards, likens it to good, cheap advertising. Jax Boutique co-owner Jamie Gorczynski says the discount is drawing in people who previously didn’t shop downtown. Other businesses have chosen not to participate because of narrow profit margins, says Remi Fortunato, the town’s retail recruiter.

If this sounds like some roundabout scheme to lure out-of-town developers, it’s really not. The program is akin to local currency movements that occasionally spring up, like Ithaca Hours in that New York city or Bay Bucks in San Francisco. Like the town-wide gift certificates Haddonfield also offers, it’s an attempt to keep money circulating around a micro-economy. In effect, it’s an ever-so-slight shift of the residential property tax burden. New Jersey’s is the nation’s highest.

“We don’t have big box stores or malls or offices and things like that,” says Kasko. “So yes, the property tax burden is pretty high in Haddonfield because it’s so residential. Plus, it’s small, and it’s built-out.”

The program seems to be catching on in other small New Jersey municipalities. Fincredit, Inc., the company that manages the rewards cards (and keeps 25 percent of the discount in every transaction), started administering the program in Marlboro Township in 2012. Since then, it’s been adopted by more than 20 towns, with half a dozen more in the pipeline, according to Fincredit founder Carmine DeFalco.

Typically, towns see 30 to 40 percent of their residents sign up for the cards; half of those actually use them, says DeFalco. Voorhees is in its third year and, according to mayor Michael Mignogna, has signed up 54 businesses and 2,500 households. So far, residents have spent $2.8 million on discountable purchases and earned a total of $200,000 in tax credits, Mignogna says.

“We are at a point where townships find us,” DeFalco says. “We no longer knock on their doors like we used to.”

So could such programs take root in Pennsylvania? On one hand, the discounts are pretty small. Say you spend $200 at a store that offers a 10 percent discount; the store loses $20 on the purchase, Fincredit gets $5, and you save $15 on your taxes. The township, meanwhile, keeps its budget intact. To make such discounts attractive, the program needs to tap into a well of frustration about local property taxes. In that sense, it could catch on all over America. But it’s tailor-made for the Garden State.

Published as “Shop Your Taxes Away” in the February 2017 issue of Philadelphia magazine.