The Budd BB-1 Pioneer, first installed outside the museum in 1935, is being removed so it can be, um, decrapped. It will return sometime next year. Workers remove the Budd BB-1_Pioneer from its pylons on Wednesday in order to dismantle it for restoration. | Photo: Daryl Peveto

The plane outside the Franklin Institute is full of shit.

Not for much longer, though. On Wednesday, crews began dismantling the stainless-steel Budd BB-1 Pioneer — perched on the Parkway in seeming mid-flight since being donated by the Budd Company in 1935 — and by next week the plane will be gone.

Last restored in 1969, the plane has been home to the nests of countless squirrels, birds, and other critters for nearly 50 years. That’s led to a lot of excrement filling up the bottom of it — and because stainless steel isn’t perfect, parts of the undercarriage are actually rusting. Sometime next year, though, the newly poop-free plane will return to its location across from Logan Circle.

“Aviation was and is a huge part of our history,” says Franklin Institute CEO Larry Dubinski, pointing out that Amelia Earhart and Orville Wright were both at the opening of the institute’s aviation exhibit in 1933. “It’s a flight and engineering marvel. It’s an art marvel — a beautiful stainless steel plane out in front of the museum is a welcoming sign for both the museum and the parkway.” 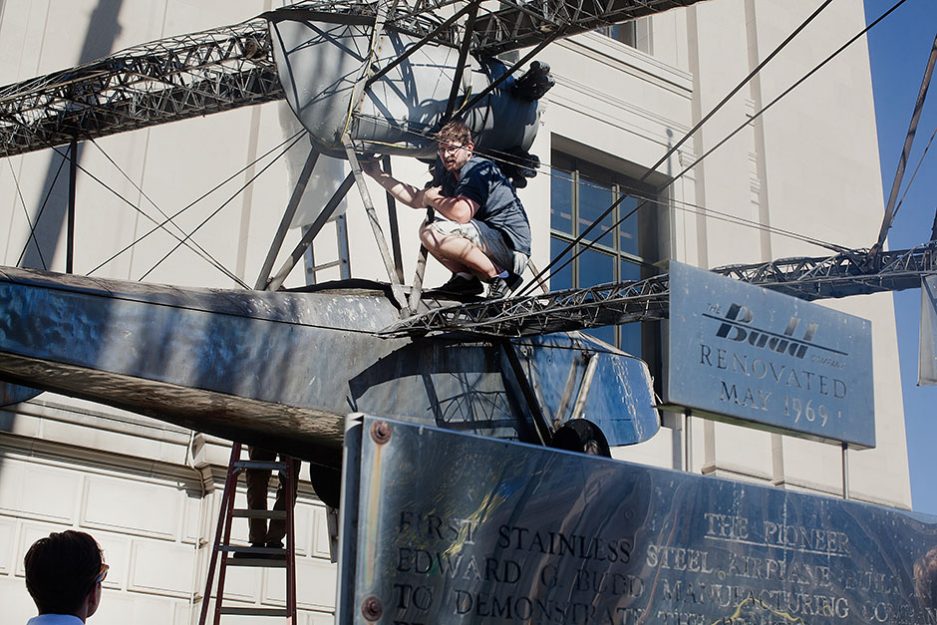 Workers prepare to remove the Budd BB-1 Pioneer from its pylons outside the Franklin Institute on Wednesday. (Photo: Daryl Peveto) 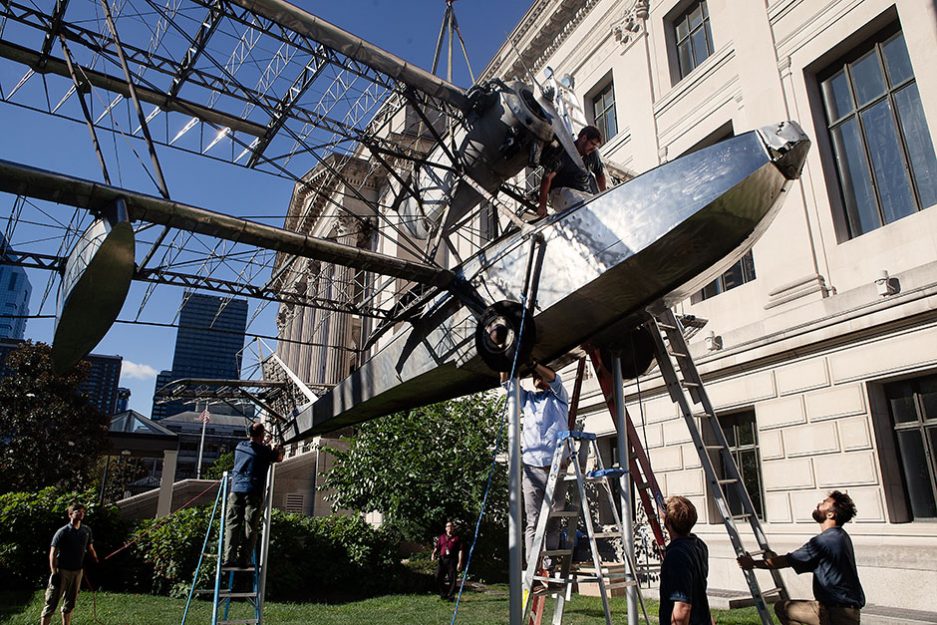 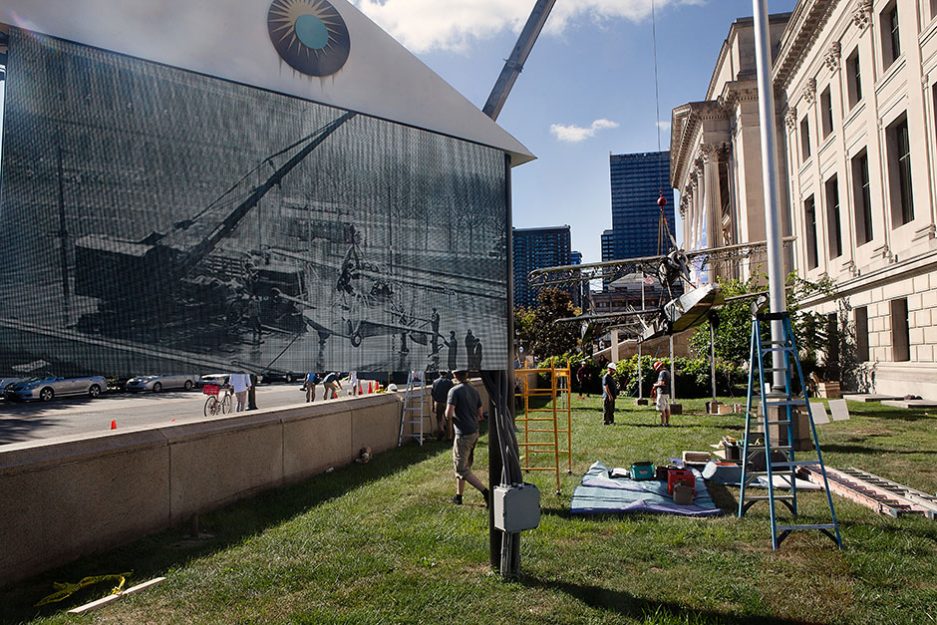 A video board shows a still of the plane being installed in 1935 while workers move it in 2016. (Photo: Daryl Peveto) 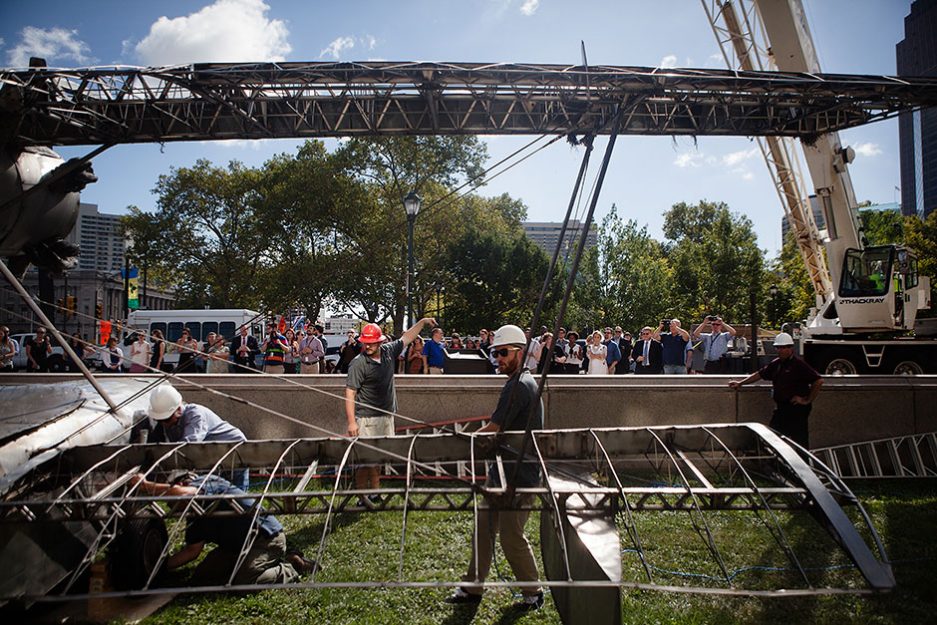 Workers remove the plane’s wings after it has been moved from the pylons. (Photo: Daryl Peveto) 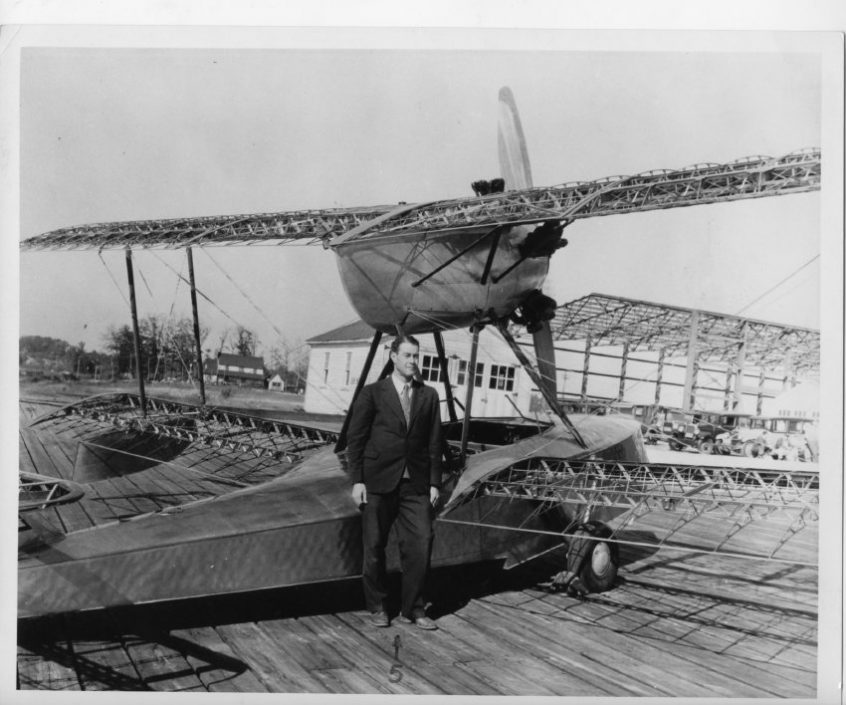 The Budd BB-1 Pioneer on an airfield in the early 1930s. (Courtesy Franklin Institute) 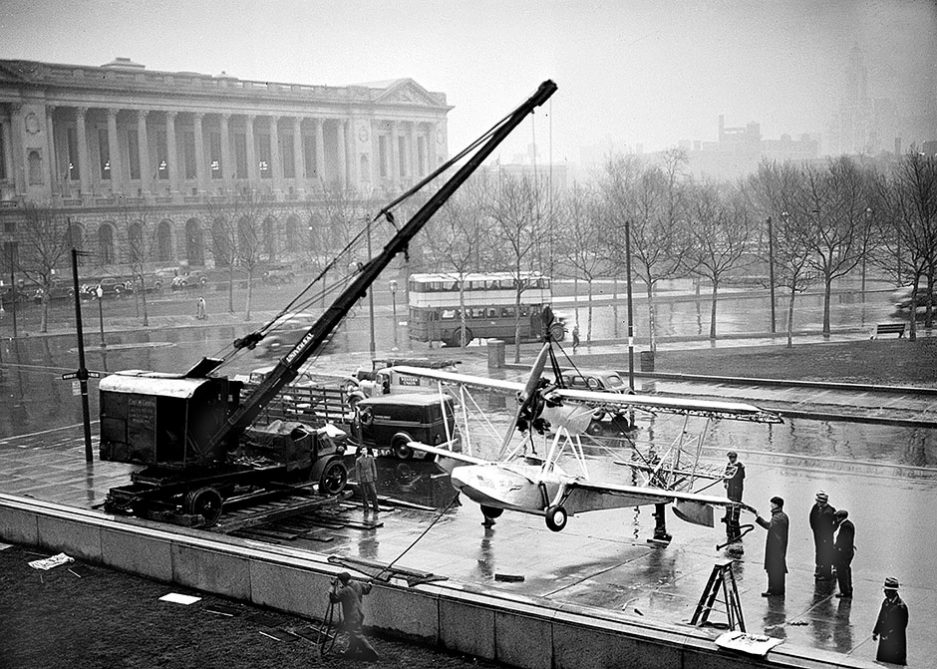 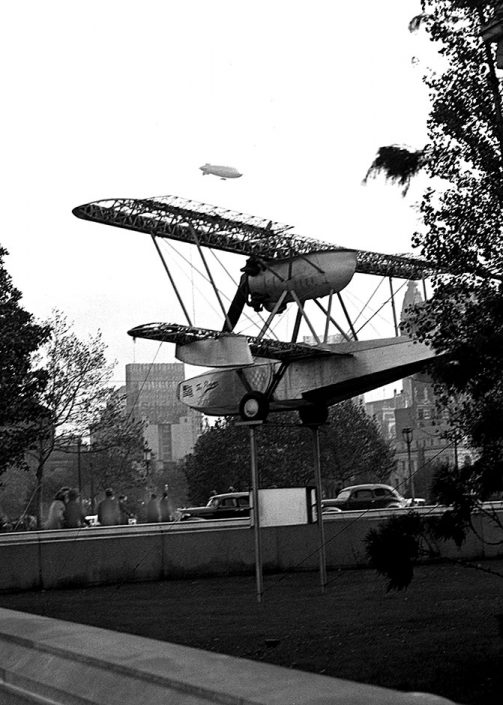 The impetus for the plane’s restoration comes from Logan Circle resident John McFadden, a longtime patron of the arts in Philadelphia. Over drinks at a fund-raiser, he got the idea to connect Dubinski with Fred Hagen, the owner of Hagen Construction and an aviation enthusiast. Once it’s completely dismantled, the plane will be shipped to Hagen’s Bensalem warehouse, where the restoration process will begin. Atelier Art Services is working with the museum in the restoration.

The Budd Company, then a major manufacturer of parts for the nascent automobile industry, decided to make an experimental aircraft. It bought the plans from an Italian company, Savoia-Marchetti. The plane — actually a flying boat that could land in the water — was not easy to handle on the ground or water, and only one was ever made. After logging about 1,000 flight hours in the U.S. and Europe, it was donated to the museum. General Aviation News wrote in 1999 that “it’s probably the longest continuous outdoor display of any airplane.”

“When that plane first sat there, it was really in the early days of aviation,” Hagen says. “Today, when you look at it, this looks like old technology — but when it opened, it was cutting-edge. To me, it’s profoundly moving because we were middle in the Great Depression … and that plane was placed on those pylons and it has sat there almost ever since. It’s not just the airplane. It’s emblematic of that early aviation spirit, where you were learning about a new technology and improving it but it was death-defying.”

Hagen is funding the restoration and McFadden the transport. Once the plane is dismantled and shipped to the warehouse, a restoration team will analyze it. It needs structural and cosmetic repair. The underside of the plane will probably have to be de-skinned and rebuilt due to the accumulated animal droppings. Then the museum will decided how to restore the plane. As a prop instead of a working aircraft, it isn’t being restored to air-worthiness. Hagen and the museum will eventually discuss further options.

“I think it may be important to re-skin the wings,” Hagen says. “I think it would be nice to light them — to have a translucent material so it glows at night… but of course if we do skin the wings, birds and squirrels can’t nest inside, but then we have a recurring maintenance issue.”