You'll have to go to the zoo for lions and tigers and apes — but we do have falcons and coyote and star-nosed moles(!) roaming about.

Before there was a concrete jungle, before there were even Swedish settlers or William Penn’s Greene Country Towne, American toads sang in the ponds. Some of the old neighbors are gone (no more elk or mountain lion), but some are still hanging around.

Sturgeon have been cruising the Delaware River as long as there has been a Delaware River. And we have new neighbors, too: Some are recent immigrants like the northern snakehead, others are old friends we’ve brought back like the peregrine falcon, and others still, like the coyote, have crossed a continent themselves to get here.

Here are 10 animals you might be surprised to find living in the city. At over 300 pounds and with rows of bony knobs down their backs and sides, Atlantic sturgeon look like something from the age of the dinosaurs. Actually they are: These fish haven’t changed much in the past 70 million years. The Delaware River’s Atlantic sturgeon spend most of the year cruising the edge of our continent from Cape Canaveral, Florida, up to Canada’s Maritime Provinces. Ours were nearly wiped out in the caviar boom of the late 1800s, but a small group make it back to breed every spring in our big river.

Coyote-face-snow by http://www.ForestWander.com. Licensed under CC BY-SA 3.0 us via Wikimedia Commons.

Wait, shouldn’t these guys be chasing road runners somewhere in the desert Southwest? Coyote have actually been expanding their range east since the 1800s. They’ve been filling gaps left by the other large carnivores we killed off, and enjoying civilization’s perks: trash, roadkill, rats, garden produce, and the occasional cat or small dog. Reports place them by the airport and even in Old City, and they’ve been photographed recently around the Wissahickon. As if the name isn’t horrifying enough, these fearsome fish look like pythons with fins and sport rows of pointy teeth. They breathe air and can survive for freakishly long periods of time out of water, making it easy for them to wriggle their way to new bodies of water. A favorite in East Asian cuisine, they were introduced into the “lakes” at FDR Park in South Philly by immigrants looking to set up a free source of the tasty fish. Now they dominate the fish community of the tidal Schuylkill River. 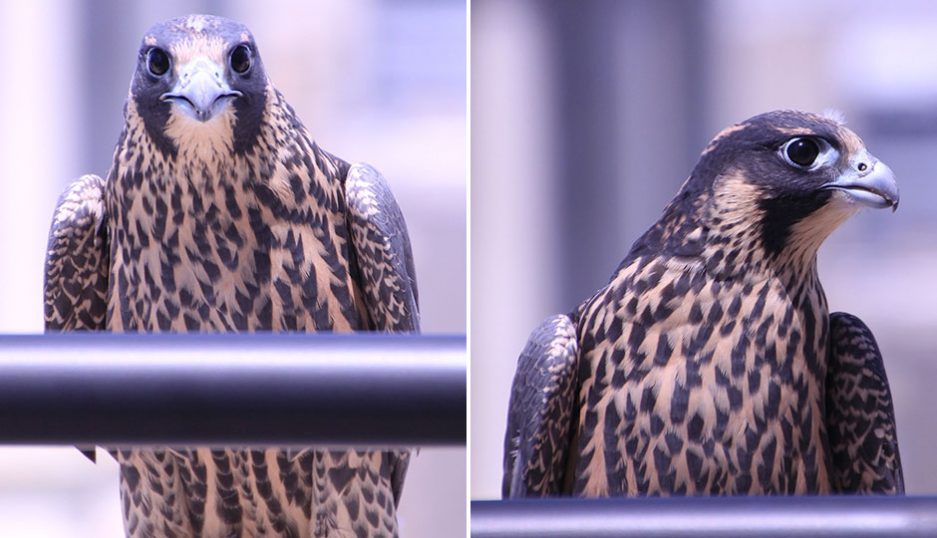 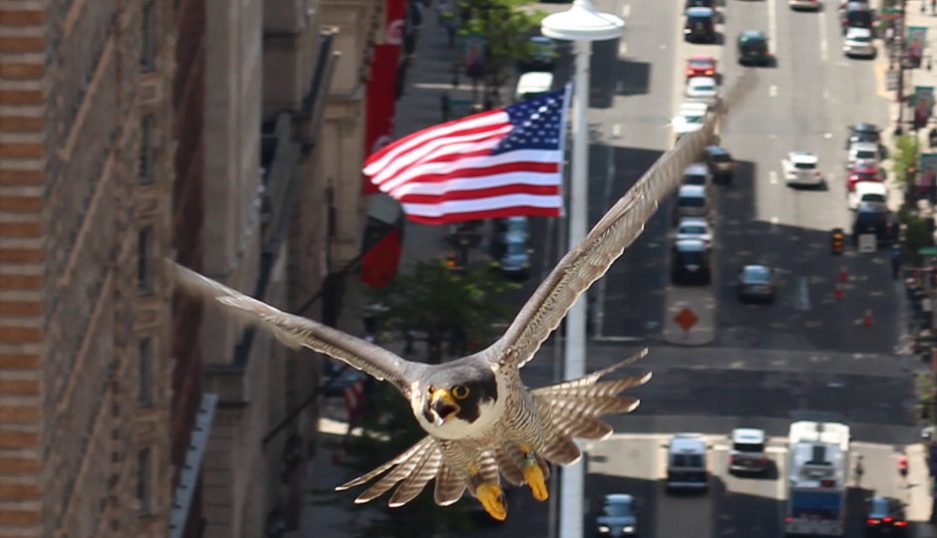 Look up this spring as you pass City Hall. You might see Center City’s fastest residents spending some family time at their clock tower nest before they zip out to pick off another pigeon. Peregrines can top 200 mph in an attack dive. If the impact doesn’t finish off their target, they can clip off the heads with specialized notches on their beaks. Still, they were no match for DDT in the mid 1900s, and Philly’s falcons are here thanks to a successful reintroduction effort by biologists who realized that peregrines, which have evolved to nest on cliffs, would feel at home in urban canyons.

A popular but apocryphal legend has it that Ben Franklin lobbied for our national symbol to be the turkey. Just imagine singing “Fly, Turkeys Fly!” every Sunday. But you actually can watch and root for Philadelphia’s real wild turkeys. The majestic birds are easy to spot at the John Heinz National Wildlife Refuge and at Batram’s Garden. Hunters had wiped out all but a few stubborn populations in Pennsylvania’s more rugged mountains in the 1800s, but reintroduction efforts kicked off a turkey resurgence, and they’ve even been seen strutting along Baltimore Avenue in West Philly.

Scared of snakes? Try conquering your fear with Philadelphia’s most common serpent. They hide under flower pots in our gardens and take shelter under all the trash and debris littering our vacant lots. The harmless brown snake grows a little bigger than a pencil and eats worms, slugs and snails. A brown snake’s teeth are too small to break human skin, but it will defend itself with its other end. If you pick one up, be prepared to wash your hands. Picking up a rock or rolling over a log in Philadelphia’s woods will reveal a wild kingdom in miniature: slithering worms and scurrying centipedes, industrious ants and lumbering slugs. You stand a good chance of spotting the red-backed salamander, a diminutive predator with cartoon-cute black eyes. About half actually have the expected dark-red backs, but they also come in a sparkly gray color. They dig the cooler weather of spring and fall, but retreat underground through the summer heat. This spring listen for the high trills of male American toads calling out from our ponds and wetlands. These warty bachelors even serenade their ladies in our old reservoirs. So many have taken to breeding in the Roxborough Reservoir that neighbors, with the support of the Schuylkill Center for Environmental Education, have mounted an effort to protect them as they cross the surrounding streets. Want to help the toads cross the road? Check out the Toad Detour project — they’re looking for evening volunteers through June — to get involved. We don’t see many Bullwinkles in Philadelphia, but naturally we’ve got plenty of Rockys. Flying squirrels use flaps of skin between their front and hind legs to take gliding shortcuts between trees. These nocturnal rodents generally fly under the radar; you won’t see them unless you walk our wooded parks at night. They are suckers for peanut butter spread on bark, though, so bait an old tree at dusk and you might just see one gliding in for a snack. Can something with giant clawed feet and twenty-two tentacles sticking out of its snout be considered cute? The star-nosed mole makes a go of it. They use all those tentacles to feel for bugs and worms underground and underwater. You might never see this subterranean mammal, but it hunts beneath wetter sections of the Wissahickon Valley day and night, summer and winter. Sometimes it seems like entomologists let their kids think up butterfly names. The Great Spangled Fritillary flutters around Philadelphia along with tiger swallowtails, dusky skippers, and other flashy butterflies. Your garden is a great place to start looking, especially if you grow the native plants that our butterflies love to drink from and raise their caterpillars on (for example, Great Spangled Fritillaries grow up on violets). You can learn more by hooking up with the North American Butterfly Count this summer through the Schuylkill Center. If butterflies have names that a small child would cook up, our freshwater mussels sound like they were named by drunk pirates. Case in point, the tidewater mucket filters the waters of the tidal Delaware. Like many of our native mussels, the tidewater mucket is threatened by pollution and dams on our waterways. Adult freshwater mussels stick in the mud, but their larvae hitch rides upstream on the gills of fish, so long as the fish can make it up stream. You can check them out by getting involved with the Partnership for the Delaware Estuaries.

Bernard Brown is an urban nature writer and the Philadelphia coordinator for the Pennsylvania Amphibian and Reptile Survey (PARS).