The heavy lifting will start after the Democrats leave next summer and last until 2020. But the agency promises it will be $110 million well spent. 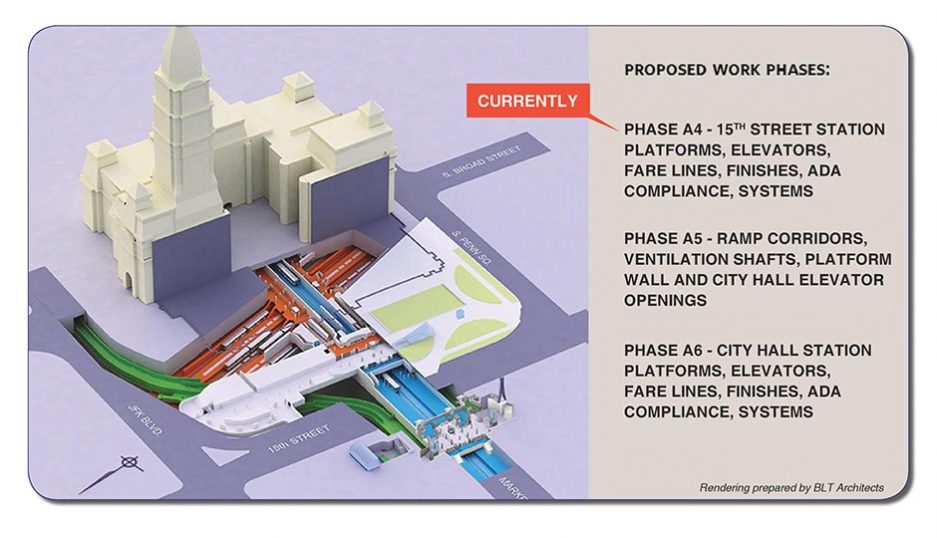 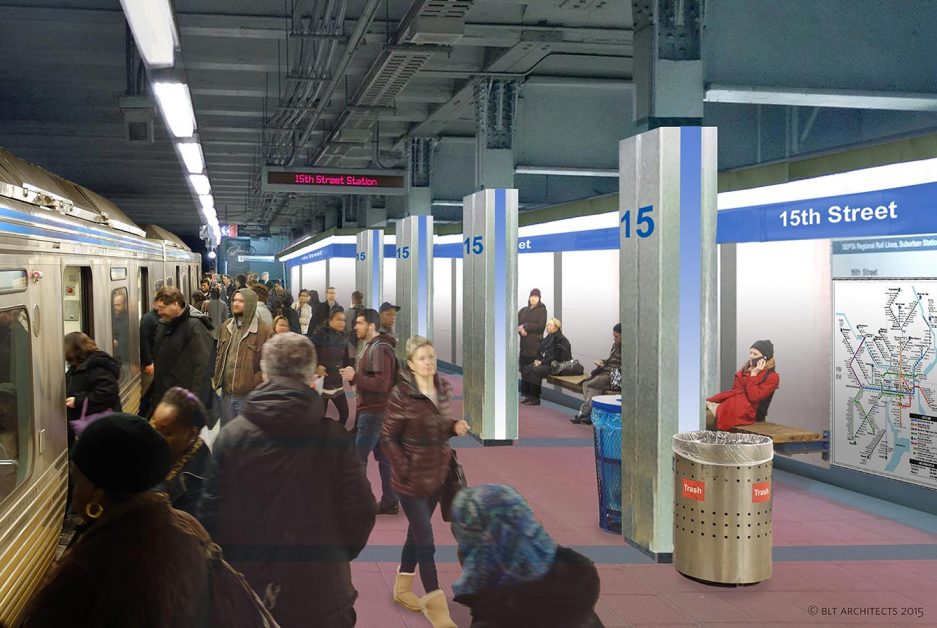 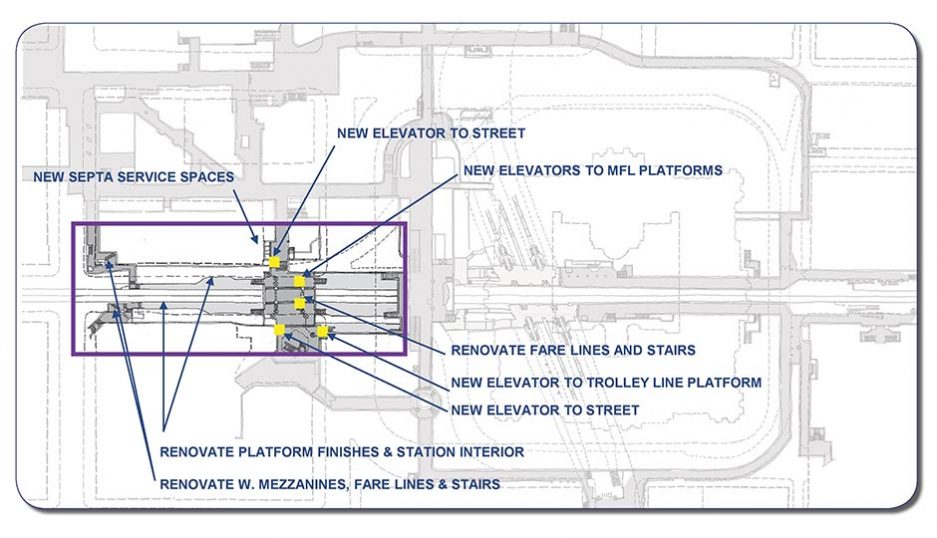 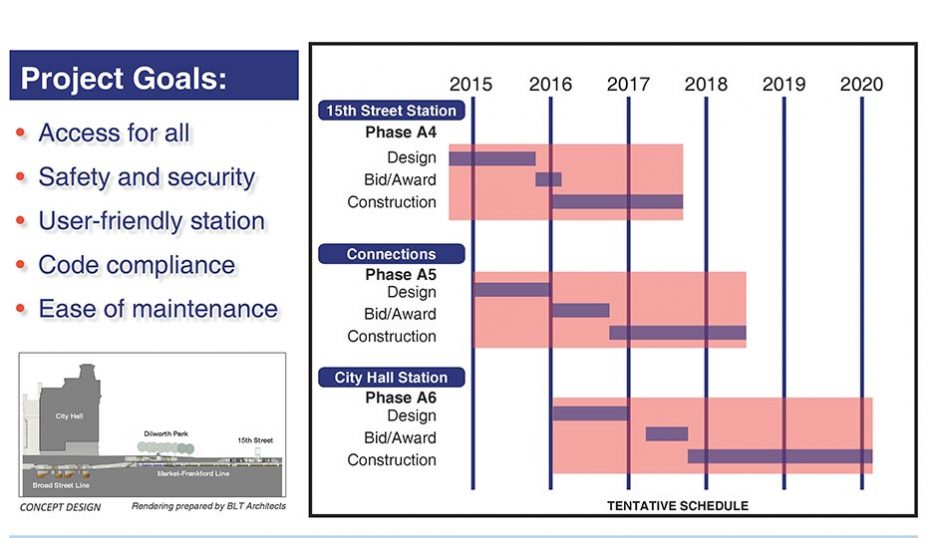 There’s good news, bad news and “bad news with a but” about the long-planned, long-delayed reconstruction of City Hall Station on the Broad Street Line and 15th Street Station on the Market-Frankford Line.

The first, but perhaps unavoidable, bit of bad news: The hordes that will descend upon Philadelphia for the World Conference of Families starring Pope Francis this fall and the Democratic National Convention next summer will experience the same dingy, cramped platforms and passages we have had to endure for more than 85 years.

That’s because SEPTA wants to keep the stations fully open for those two events. Which brings us to the good news: Once the Democrats decamp, work will begin in earnest on the largest reconstruction project SEPTA has undertaken since the Frankford Transportation Center replaced Bridge-Pratt, and the most complex one it’s ever undertaken.

That in turn brings us to the other, definitely unavoidable, piece of bad news: It will take four years from start to finish.

That’s because, as assistant general manager for engineering, maintenance and construction Bob Lund explained, there will be some very tricky engineering work taking place — and that work will be performed while both stations remain open throughout.

“It would be easier and simpler for everyone if we just shut down a station” to do the heavy lifting, Lund said, “but that would be too disruptive for our passengers.” Instead, said Jack Macklewaith, the15th Street-City Hall project manager, “we will be breaking down the work in phases so there’s minimal impact on our customers.”

Work will proceed at about the same pace on the Market-Frankford and Broad Street stations once both projects get under way in earnest in late summer 2016, but design work is further along on the 15th Street project; the renderings you see here are of that station and were provided by project architect BLTa.

The engineering to be done there is simpler, consisting mainly of inserting five elevator shafts: two from the west side of the 15th and Market streets intersection to the station mezzanine and one from the mezzanine to each of the Market-Frankford Line platforms and the eastbound trolley platform at 15th Street. The other main engineering work will involve repairs to the station’s concrete ceilings, in part to plug stubborn leaks. “The plan is to stop leaks before we get into any renovation,” Lund said. “But what we find is that when we stop one leak, it promulgates to another site.”

The need to be vigilant about leaks, along with the presence of a ton of communications infrastructure attached to the low station ceiling, explains why the renovated station ceiling will remain exposed, in contrast to the sleek ceiling treatment the mezzanine will get.

Meanwhile, at City Hall, SEPTA’s engineers face a more daunting task: shoving elevators and ramps into the narrow platform space at that station while keeping City Hall standing above it. This is why design work on City Hall is not as far along. Lund said that about 15 percent of the design work is complete for the Broad Street Line station, compared to 30 percent for 15th Street.

SEPTA’s goal is to carve out space for the new ramps and elevators by slimming down the thick support piers in the middle of each platform. “Cutting out columns and other structural elements under the tallest unreinforced masonry structure in the world is not for the faint of heart, so we’re making that a dedicated phase unto itself,” Lund said.

Advances in materials technology since City Hall’s shell was hollowed out in 1915 make it possible to hold up the weight of the building with thinner columns, Lund said. But doing so while keeping the station open makes the task more complex than it would otherwise be. Lund “pleaded the Fifth” when we asked whether the engineers at SEPTA today curse those who made the decision to put the Broad Street Subway station directly beneath City Hall, but went on to say, “Engineers love a challenge. And that’s what it was initially when they put the station underneath City Hall. It’s been done before.” And it can be done again, is the implication.

Of course, all of this comes at a cost: $110 million, of which $90 million represents the work on the Broad Street Line station. “You all should thank Harrisburg for making this happen,” said Lund: Work is starting now after years of talk because SEPTA now has a stable stream of funding for repair projects thanks to Act 89, the statewide transportation funding package passed in the last year of Gov. Tom Corbett‘s administration.

Community relations crews were at 15th Street this morning showing off images of things to come and passing out informational flyers on Day One of SEPTA’s community outreach campaign for this project. They will be on the platforms again tomorrow (Wednesday) morning; if you have any questions about the reconstruction project, they will be glad to answer them.