Here Are Renderings of the Newest Proposals for Atlantic City Seven years ago, a buyer offered $900 million for Bader Field. But Atlantic City said no to the deal for the former airport.

It’s now worth about $150 million. When it was for sale in 2009, it attracted no bids. It is now best known not as the first place to be called an airport, but for its empty baseball stadium and music festivals. And now, this: Yesterday, city-hired consultants unveiled concept proposals for Bader Field.

Maser Consulting, which was paid by a Hurricane Sandy recovery grant, also unveiled concepts for Gardner’s Basin. The city-owned plot in the Northeast Inlet is a quaint area with the feel of a smaller shore town. It’s also the site of the the Atlantic City aquarium.

The city has another request for proposal out for Bader Field (to be fair, it has tried this before). This RFP deadline is April 14th. Glenn Straub, the developer attempting to purchase Revel, tells the Press of Atlantic City Maser Consulting’s plan is “not going to put money in anybody’s pocket.” He wants the airfield so he can fly high rollers in to Atlantic City, if he’s actually able to purchase Revel.

The proposal for Gardner’s Basin would add a retail village, a park for fishing and an amphitheater. The aquarium would also undergo an expansion. This spring, Atlantic City’s Boardwalk will undergo a $50 million extension that will take it all the way to Gardner’s Basin for the first time since 1944. The Army Corps of Engineers is paying for $35 million of the work.

Below, renderings of the concepts for Bader Field and Gardner’s Basin presented yesterday. 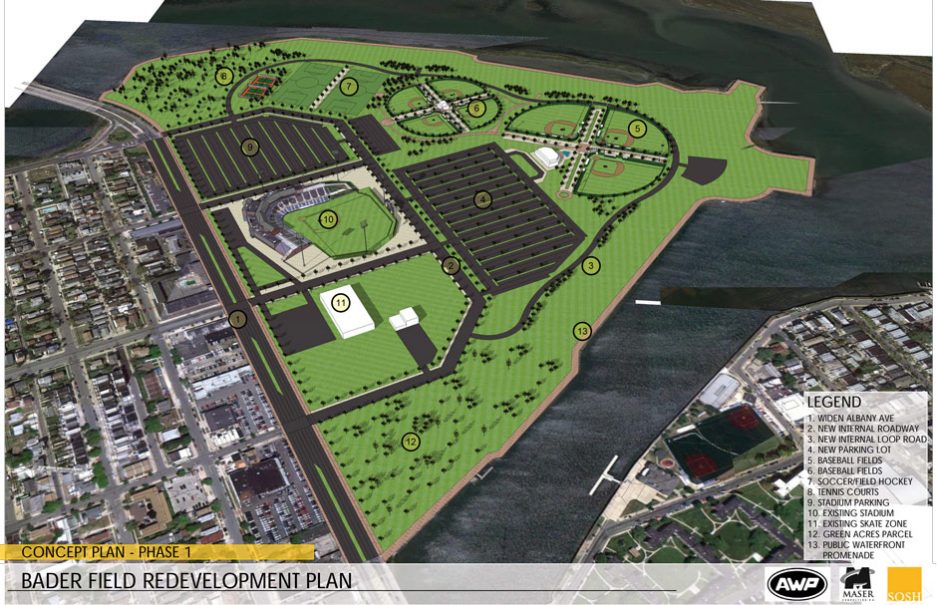 Phase 1 would add a promenade along the water as well as new recreational and parking facilities. 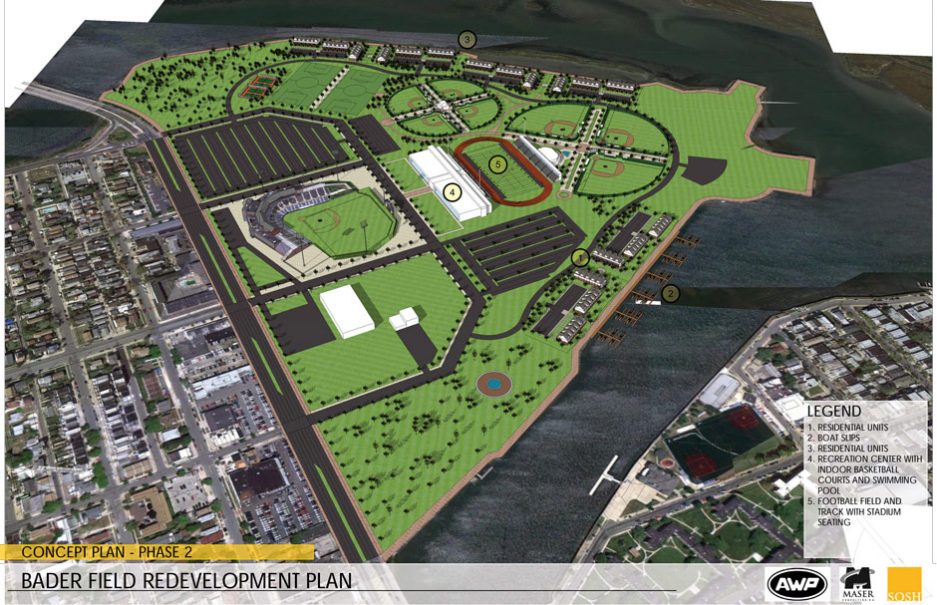 Phase 2 would add residential units (some with boat slips) and a rec center. 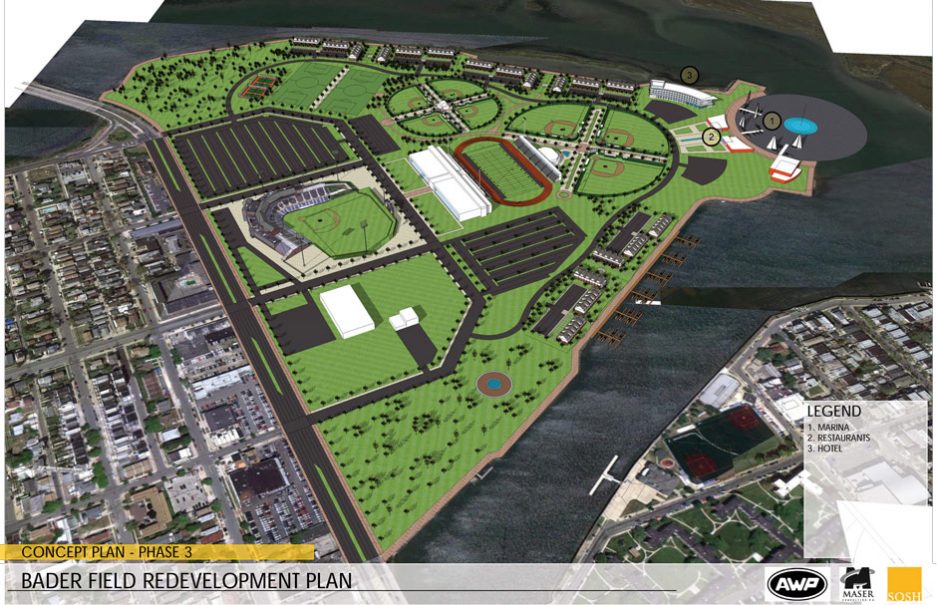 Phase 3 would add a marina, several restaurants and a hotel. 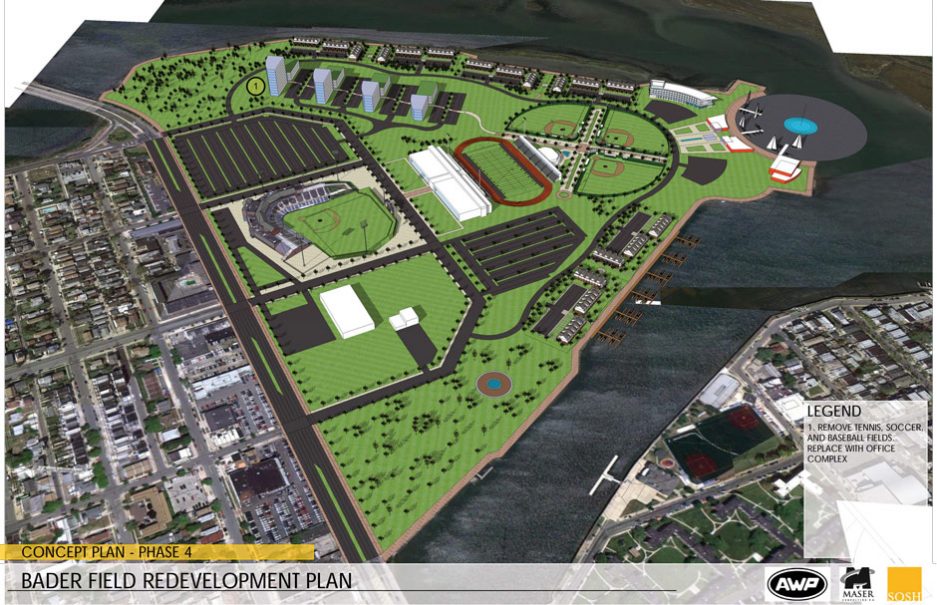 Phase 4 would demolish the baseball and soccer fields, as well as tennis courts, to make way for an office complex. 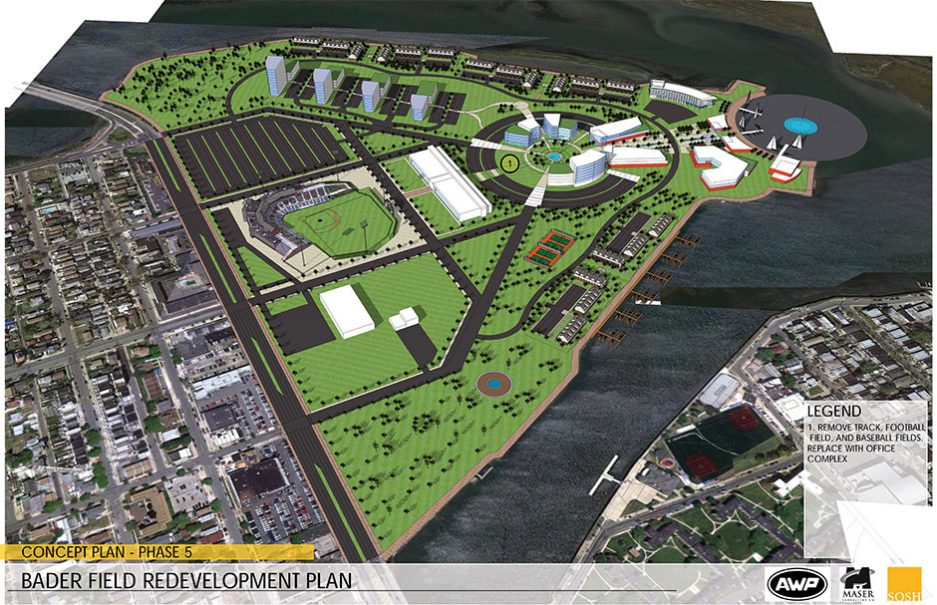 Phase 5 would remove more recreational facilities (a football field, a track and more baseball fields) and replace it with an office complex. The rec center would remain. 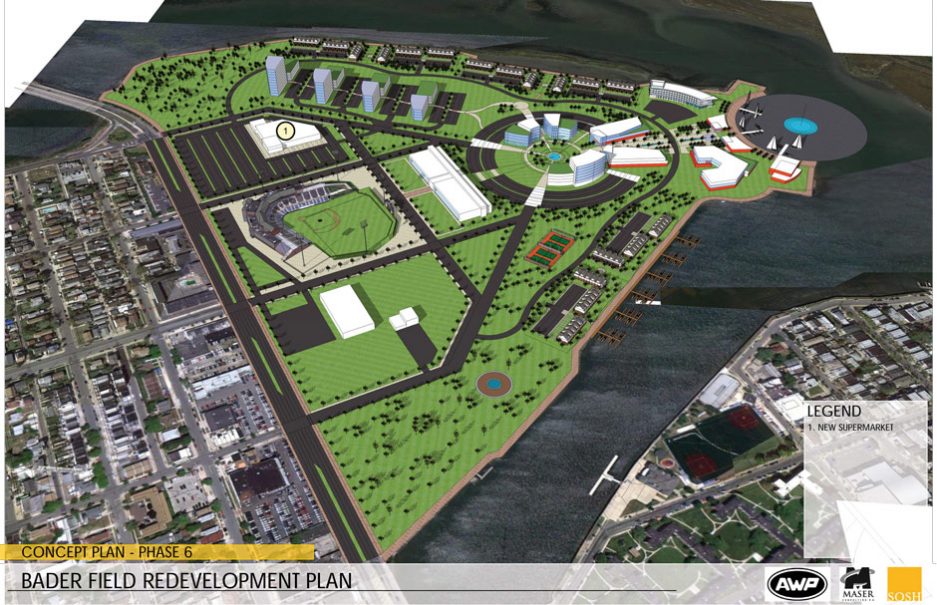 Lastly, Phase 6 would add a supermarket. 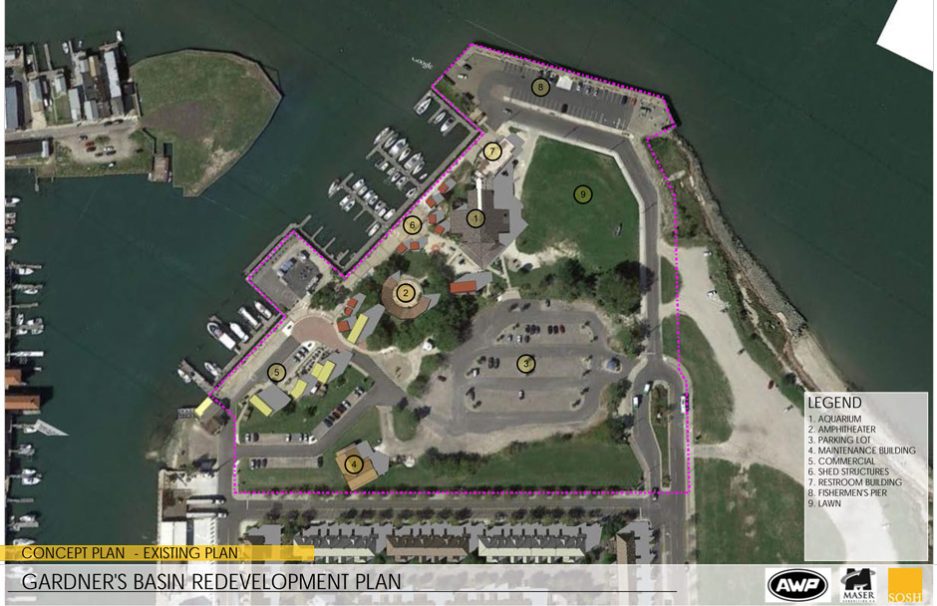 A look at the current state of Gardner's Basin. 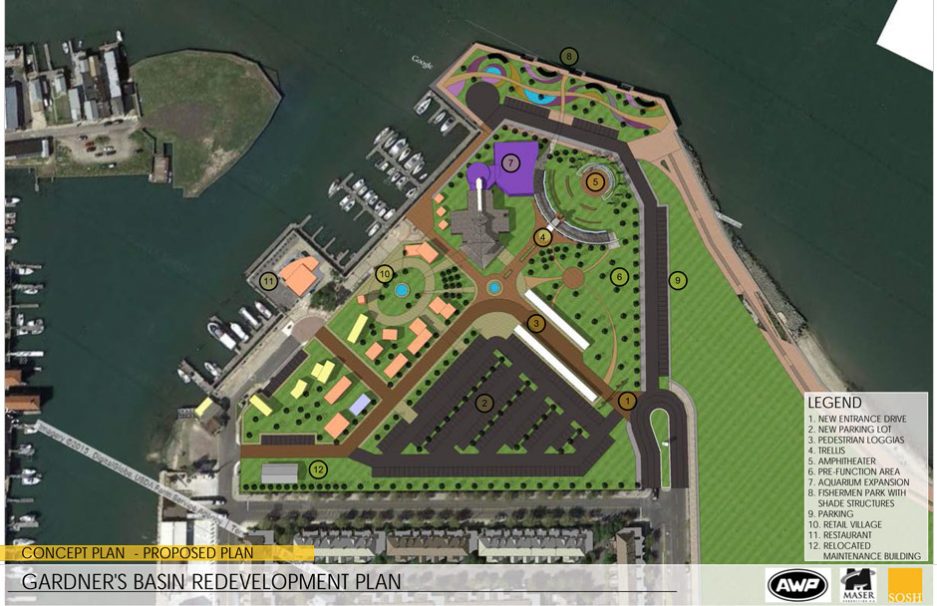 The proposed plan for Gardner's Basin. It includes an amphitheater, a park for fishing, retail outlets, a restaurant and an expansion of the aquarium. 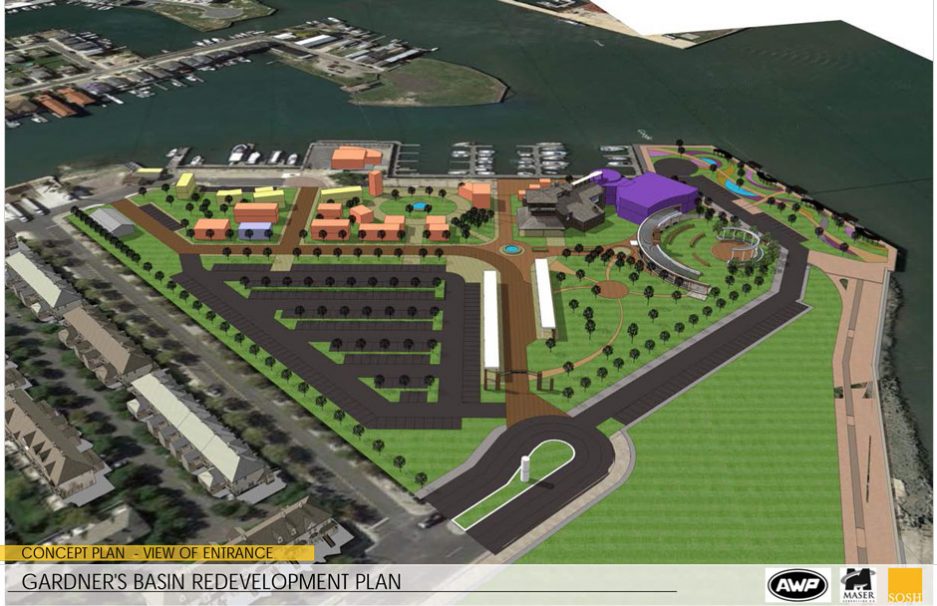 A view of the entrance to the proposed plan for Gardner's Basin. 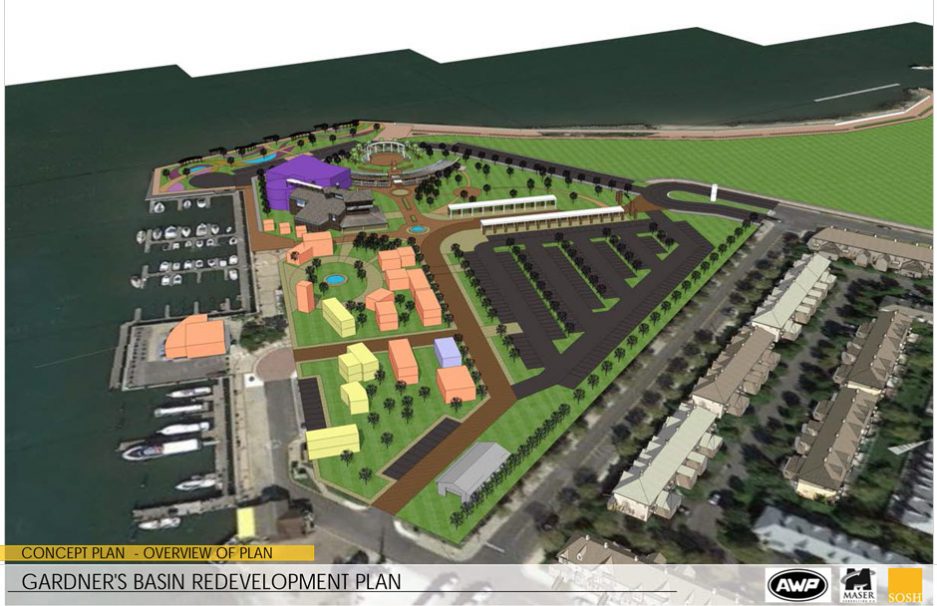 Another view of the Gardner's Basin proposal. 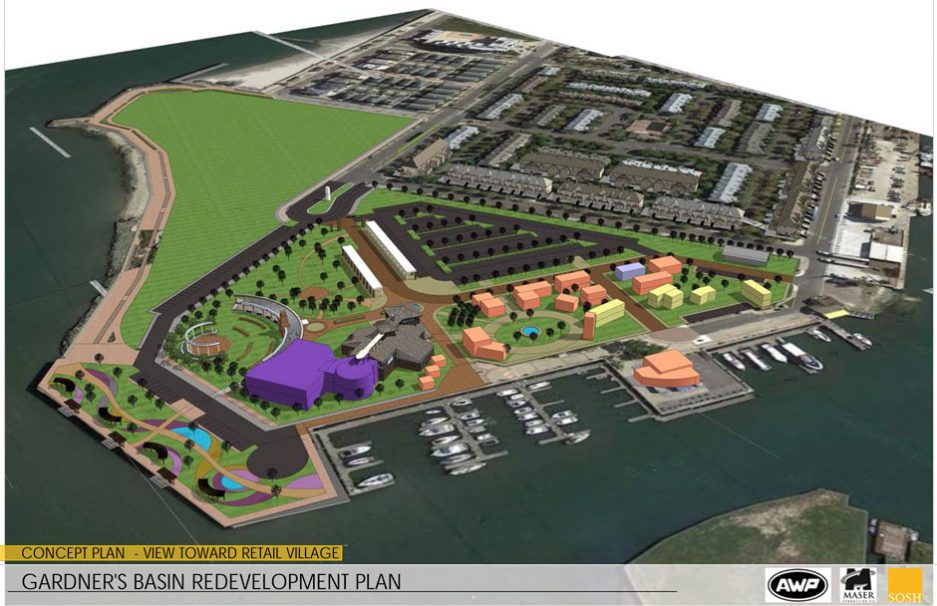 A view of the retail outlets in the plan (the peach buildings in the center). 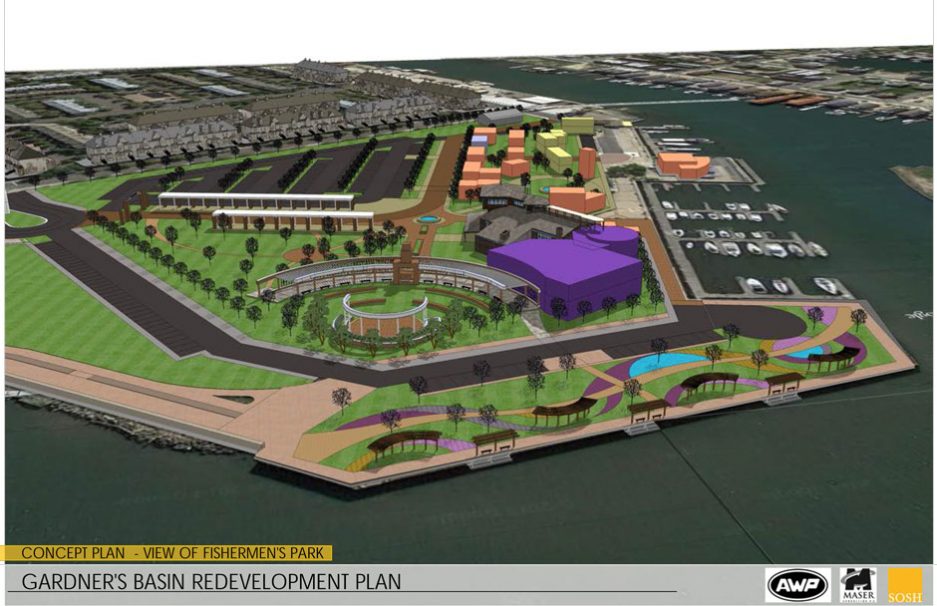 A view of the proposed park for fishing.