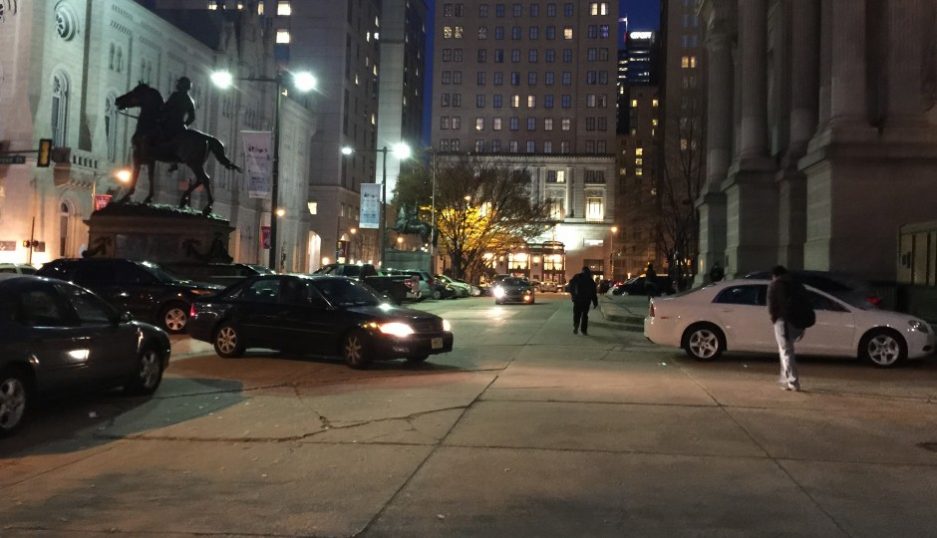 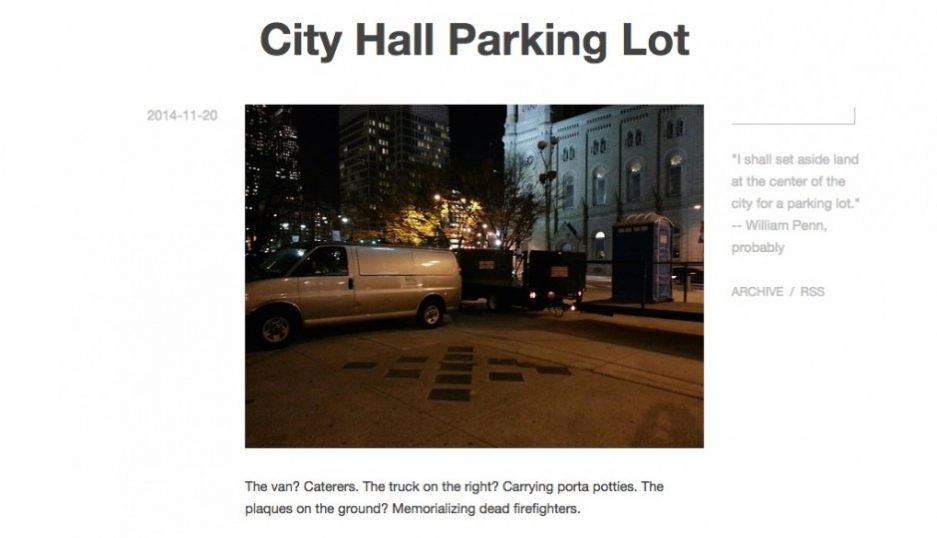 A new Tumblr chronicling the adventures of the City Hall Parking Lot. 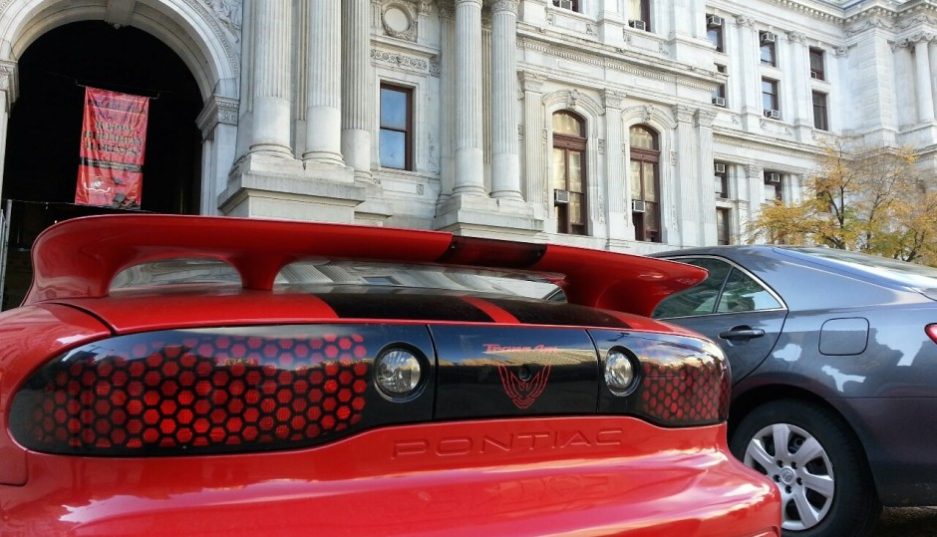 Race you to the caucus room. 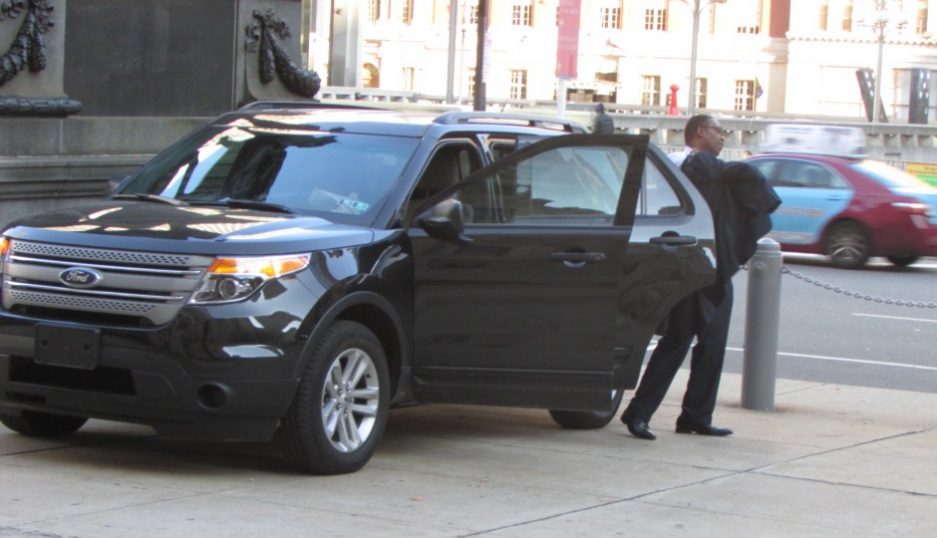 City Council President Darrell Clarke parks on the apron the morning of a council meeting. 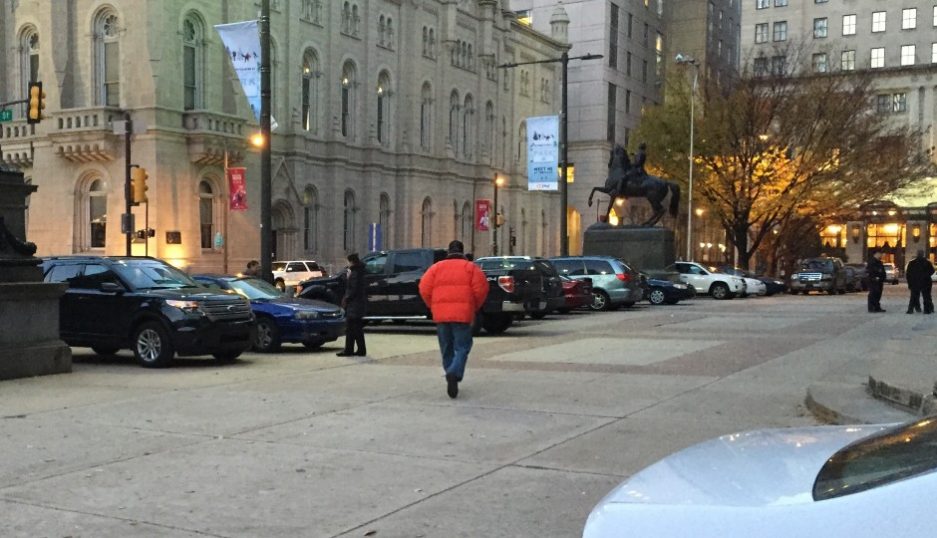 That's a lot of VIPs. 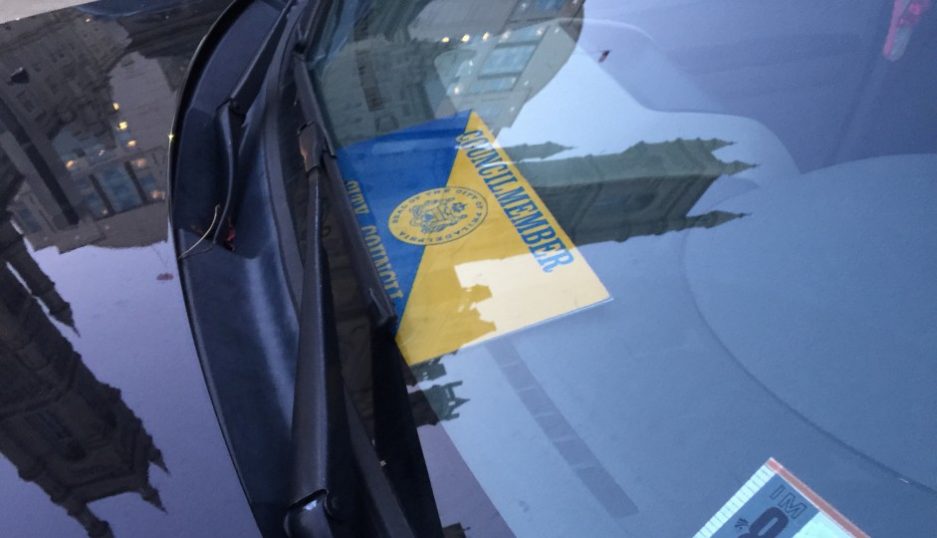 A number of council members routinely park on the City Hall apron. 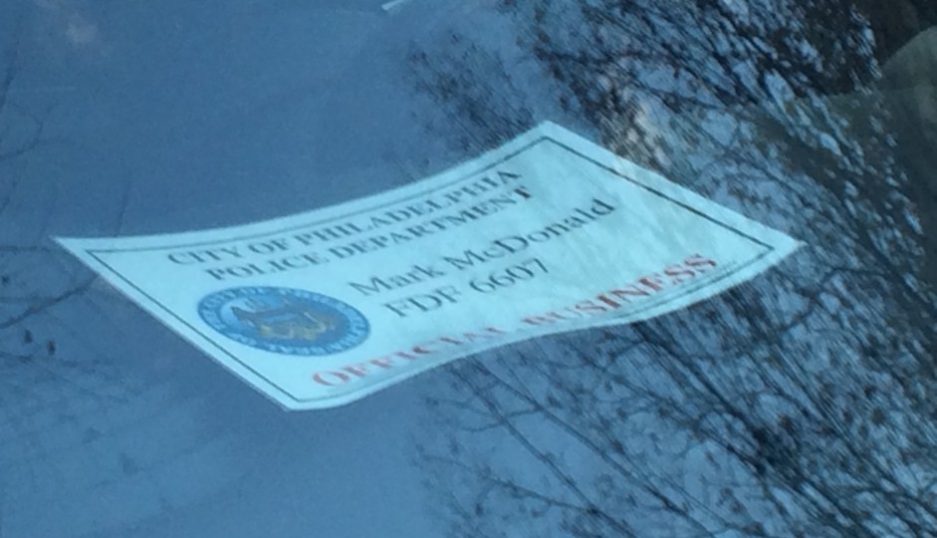 Mayoral press secretary Mark McDonald is among those authorized to park on the sidewalk beside City Hall. 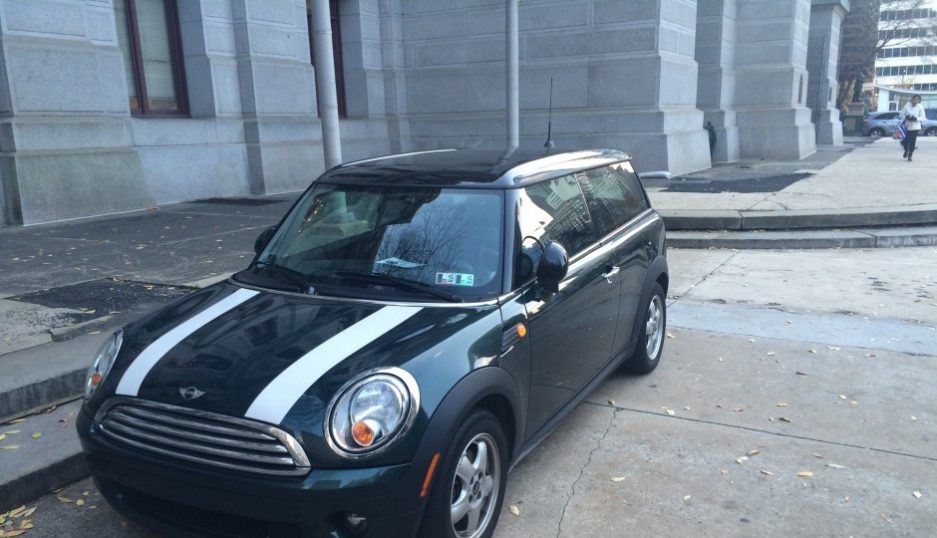 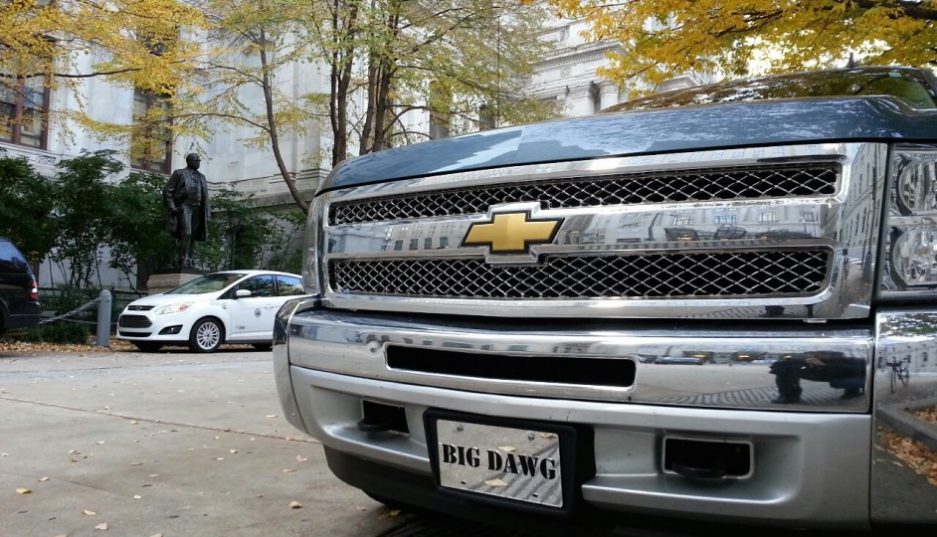 The new $55 million Dilworth Park has its critics, but I’ve become a big fan. It gives City Hall badly needed context, and the scale of the plaza creates a real sense of grandeur… right up until the moment you stroll past the Garces cafe and encounter the sad, parochial scene of dozens of VIP vehicles squatting on the northern apron of City Hall, as though it were a parking lot outside an Upper Darby laundromat.

Yes, city workers and officials have been parking on the apron for years (more on that later), but it looks like the traffic has grown heavier in recent months, or perhaps it just feels that way given the jarring juxtaposition that now exists between City Hall’s graceful, Global City-esque western approach, and the loading-dock vibe a few steps to the north.

I’m far from the only one to have noticed. Jonathan Poet, an editor at the Associated Press, recently dedicated a Tumblr to the City Hall Parking Lot. Urbanist warrior Geoff Kees Thompson cited the apron parking as an glaring example of “city leadership undervaluing and undermining its public space for the sake of the car.”

I think there’s more to it than that. VIP parking on City Hall’s front stoop reeks of entitlement. People find it enraging and insulting because it’s shorthand for oh-so-much: lack of concern for the city’s aesthetic appeal, the political class’ overblown sense of its own importance, general disregard for … you get the idea.

Let’s get to what everyone wants to know: Who is it that actually parks there?

Mayor Nutter for one. Council President Darrell Clarke for another. That much you’d probably expect. But there is a raft of other VIPs and more anonymous city officials with carte blanche to park on the apron, and many more who receive permission on an ad hoc basis directly from the mayor’s office, according to City Hall sources.

Also on the list were a number of executive assistants in the mayor’s office. And indeed, sources tell me, the matter of who parks on the apron is directly controlled by the mayor’s office, not the Philadelphia Parking Authority, not the managing director, and not the city’s Department of Public Property.

I tried to confirm that account with the mayor’s office, but Press Secretary Mark McDonald did not respond to multiple requests for comment. Perhaps that’s because McDonald is one of the names on the exclusive list of authorized apron parkers (indeed, as I write this, a colleague is snapping a few photos of McDonald’s car, which is at this moment conveniently parked just a few feet from City Hall’s literal front door).

The list has almost certainly changed from the older copy I obtained. I filed a right-to-know request seeking a copy of the current list, but it’s likely to be weeks before I get it, if ever.

The traffic on the apron of late strongly suggests that the list has grown. A handful of council members — including Clarke and Maria Quiñones-Sanchez — have been authorized to park on the apron ever since the Dilworth construction project, a City Hall source said. It seems their old spots on the actual, you know, street, were temporarily taken away while Dilworth was rebuilt and they have yet to get them back. I saw Sanchez in her car on the apron Wednesday evening, and she somewhat sheepishly said she’d be happy to park on the street again once her spot was returned.

But there are way more cars on the apron of late than can be explained by a handful of council members, pre-authorized VIPs and mayor’s office staffers. Dignitaries and non-dignitaries are now pulling into the apron of City Hall to park, sources tell me, and getting real-time approval to do so directly from an executive assistant in the mayor’s office. “It’s scope creep,” a City Hall source said. “Somebody says, ‘I’m just as important as a councilmember, why don’t I get to park on the apron?’”

At times during the day, there are security guards vetting who comes in and out. But on Wednesday evening I saw four cars drive onto the apron unchallenged. A young couple got out of one of the vehicles, walked into the City Hall courtyard, and continued down Broad Street. They looked to be headed for a pleasant night out on the town. It’s possible they were city officials. Or maybe they just figured if everybody else was parking there, why shouldn’t they?

Look, there are perfectly valid reasons for Mayor Nutter to have a car at the ready 24/7, and of course service vehicles have legitimate need to pull up to the foundations of City Hall all the time. Fine.

But it’s far harder to understand why Nutter’s press secretary, his executive assistants, City Council members and the frigging Register of Wills can’t brave the one-block trek to City Hall from either the city-owned parking lot beneath LOVE Park, or the many street level spots reserved for city workers on blocks all around the building (not to mention the two subway lines literally running beneath the very pilings of City Hall).

From what I can tell, parking on the apron began back in 1981. There were intermittent efforts to roll it back, which failed. In 1992, then Mayor Rendell and Council President John F. Street jointly vowed to crack down for real. “The only thing we don’t have is a booth and turnstile,” Rendell reportedly said. Street quipped that “you need some of those Eagles linebackers just to walk safely down the sidewalk.”

It worked under Rendell. For a little while. Actually it was Mayor Street who was most successful at keeping cars off the apron, City Hall veterans say. The same veterans say it was Mayor Nutter who has allowed the parking to resume.

The ironies abound. In this small instance, at least, it is Mayor Street who has been the enlightened urbanist with little patience for the entitled classes, and Mayor Nutter who has prioritized the convenience of a privileged few over Philadelphians who hope to walk around City Hall without being involuntarily reminded that it’s time to get that oil change.

How much does any of this matter? It’s self-evidently trivial compared to the fate of PGW, school funding and a 26.3 percent poverty rate.

But symbolism counts. Mayor Nutter knows that better than most. And the symbolism of VIP cars crowding the doorstep of the people’s hall is wretched.

Samantha Scheetz contributed to this report.