Phillies: A Fan’s Guide: How the Phils Made Us a Baseball Town Again

In a summer that saw the world crumbling around us, the Phils pulled through, and pulled us through, winning every which wonderful, magical against-the-odds way. 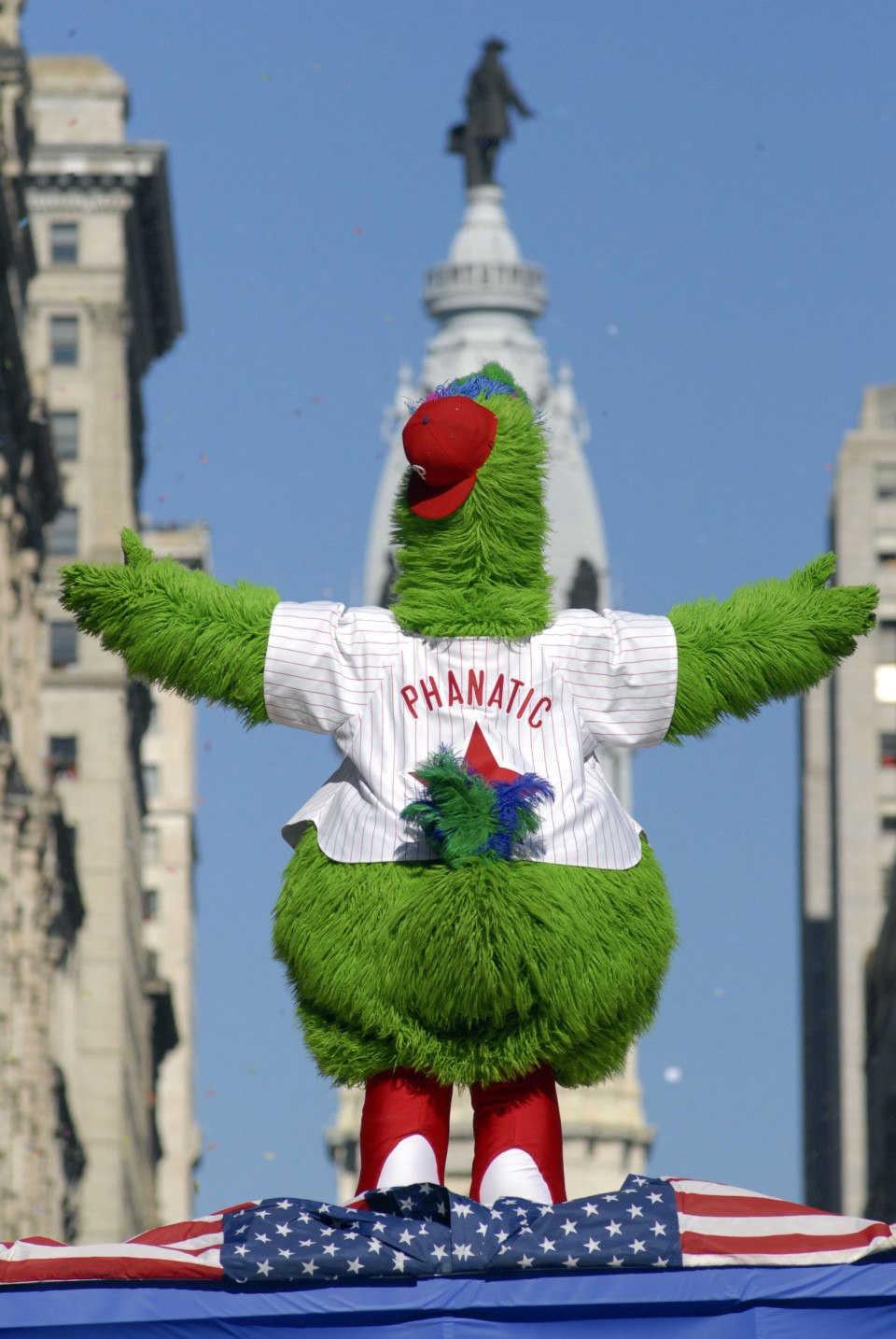 The Phillie Phanatic dances on a float in front of City Hall during the World Championship Parade October 31, 2008 / Photograph by William Thomas Cain/Getty Images

Back in the ’60s, when I was in grade school in Glenside, two of my classmates were named Dawn and Lori. Dawn was the daughter of Phillies catcher Clay Dalrymple, and Lori was the daughter of Phils right fielder Johnny Callison, MVP of the 1964 All-Star game. Know what I remember about those dads? Not one thing. I went to birthday parties at their houses, watched them mow their lawns (themselves), had them serve me hot dogs at neighborhood picnics — and they didn’t stand out in a crowd any more than my dad did.

I thought of Dawn and Lori for the first time in a long time in July 2007. I was watching TV; the Phillies were playing the Rockies out in Denver. It was a historic occasion: The Phils had racked up 9,999 franchise losses and were waiting for the 10,000th shoe to drop. Still, they were up 5-4 when the game went into rain delay just after the sixth inning. The Rockies ground crew brought out the tarp, but a gusty wind whipped it onto their heads instead of the field. The home team had bailed for the locker room, but Shane Victorino led a charge of Phillies back onto the rain-swept diamond. Ryan Howard pinned the tarp down with one mighty knee while pitcher Adam Eaton and rookie Michael Bourn helped Victorino wrassle it into submission. The job done, they trotted away with no more ado than Lori’s father handing out candy on Halloween. After the delay, Shane slammed a two-run homer, and the Phils won, 8-4.

That was when I knew: This was our team.

The Phils would lose that 10,000th game a week later. They finished 89 and 73 that season, good enough for first place in the NL East, then dropped the division series to the Rockies. We were okay with that. We were still getting to know these guys — Chase and Ryan, Cole and Jayson and Carlos — and manager Charlie Manuel, after his third season. We didn’t want to get ahead of ourselves, get too greedy. This wasn’t the Yankees, yo.

It would take the next season, 2008, to make us true believers. Philadelphia fans aren’t easy — hell, the world knows that. But why should we be, with what we’ve been through — those 10,000 losses, the ’64 debacle, not to mention a pro basketball team that’s going nowhere fast, a hockey franchise that can’t get its act together, and a football team led by a quarterback who thinks getting to the playoffs ought to shut us up? Brrrr!

These Phillies, though — they were different. They were so much fun, whether it was Jimmy Rollins trash-talking the Mets, or Brett Myers punking Kyle Kendrick into thinking he’d been traded to Japan. (“Do they have good food?” bewildered Kyle appealed to reporters. Manuel told the press he’d have paid to extend the joke by flying the rookie pitcher to Tokyo: “That would have been the best.”) Dan Gross and Michael Klein kept us apprised of their whereabouts, and you know what? They weren’t eating at Le Bec. They were chomping crabs at DiNardo’s and cheesesteaks at Jim’s — just like us. Okay, they sometimes had the burger at Rouge. The point is, we saw them! They lived and walked among us! They even made crappy-ass commercials for local car dealers, like the ’64s used to do!

And more importantly, they won. In a summer that saw the world crumbling around us, in which the nation lost a quarter of its savings, and mighty investment banks poof-vanished, and auto manufacturers failed, and homes went into foreclosure, and thousands of us were out of work and out of luck, the Phils pulled through, and pulled us through, winning every which wonderful, magical against-the-odds way, whether it was Chase faking a throw or Brad staying perfect or Shane leaping to make that catch against the wall. And oh, the made-for-TV stories! Sellersville’s own Jamie Moyer, the oldest active player in the majors. Chris Coste, “The 33-Year-Old Rookie.” Myers, floundering and banished to Triple A, fighting his way back to relevancy. Forty-year-old Matt Stairs, playing for his 11th different major league team — and looking like the stout, cranky innkeeper in a Dickens novel — hitting the ball out of the park in the Championship series. We couldn’t get enough of them, whether they were boogeying with the Phanatic, or faux-pas-ing at their celebratory parade: World fucking champions!

They brought it back the next season, too. Okay, the Yankees took the Series, in the end. Big deal. Did they even have a victory parade? Who gives a damn about the Yankees, that Madonna-humping, steroid-slurping, $2,500-a-seat bunch of droids? You wanna talk dynasty? We’ll talk dynasty. We’ve still got Jimmy and Ryan and Chase and Raul and Carlos and Cole and Charlie, and now we’ve got Roy, too. And we are gonna whup your overpaid mercenary-soldier butts when October rolls around again. If you even make it that far. And if not you, then whatever team fate throws us up against.

That’s right. That’s Philadelphia talkin’. Doubt-driven, Quaker-constricted, stuck-between-NYC-and-D.C., hasn’t-been-relevant-since-guys-wore-breeches Phil-a-del-phia, smacking right back atcha. The Phillies made us winners — and we made them winners. (Is there any fan base in the nation so convinced of its ability to sway the outcome of games by faith alone?) So — batter up! Throw that first pitch! Ryan, for God’s sake, don’t overthink it!

You know what? We really love this team.