Vybe Urgent Care and Aardvark Mobile Health have teamed up with the City of Philadelphia to bring COVID-19 testing to you. 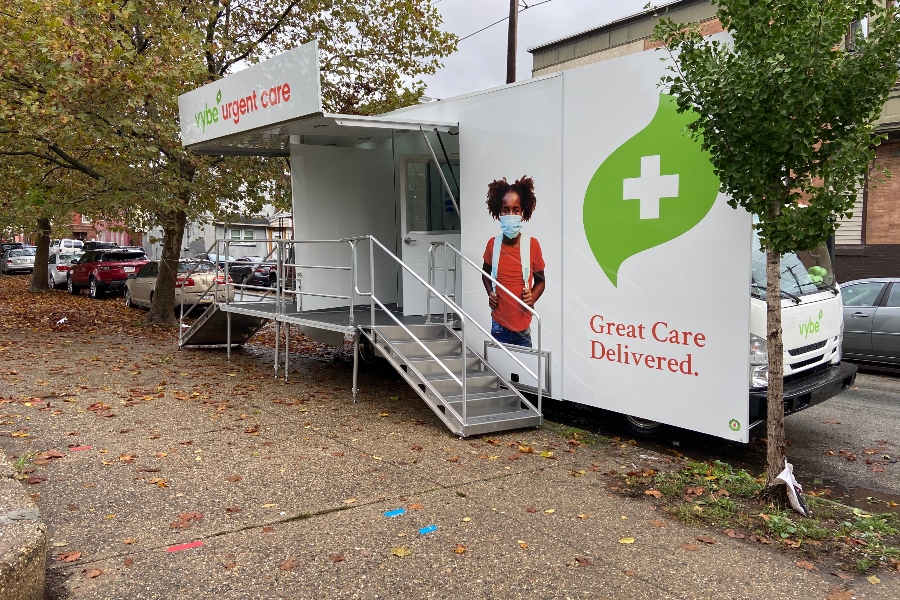 Aardvark’s CEO and founder, Larry Borden, has turned the company’s mobile marketing service into a health-focused entity, with hopes of improving access to testing for those who cannot travel to brick-and-mortar locations. While the city has over 50 testing sites, many of them are drive-thru, limiting access for people who do not have cars.

In June, the Florida Division of Emergency Management became the first state agency to use one of Aardvark’s testing trucks. The agency initially deployed one testing truck in Miami, an area that was then seeing a high prevalence of COVID-19 cases. Aardvark is currently operating similar trucks in more than 160 locations across the country. In October, Aardvark and Vybe’s pop-up clinic trucks began traveling throughout the Philadelphia region hosting coronavirus testing events. The truck operates two to three days each week at various locations throughout the city. You can find a list of locations for upcoming mobile testing events here.

We took a tour of one of the trucks ahead of a testing event in Mifflin Square Park on 500 Wolf Street in South Philadelphia to show you what to expect if you visit. Here’s what we saw. 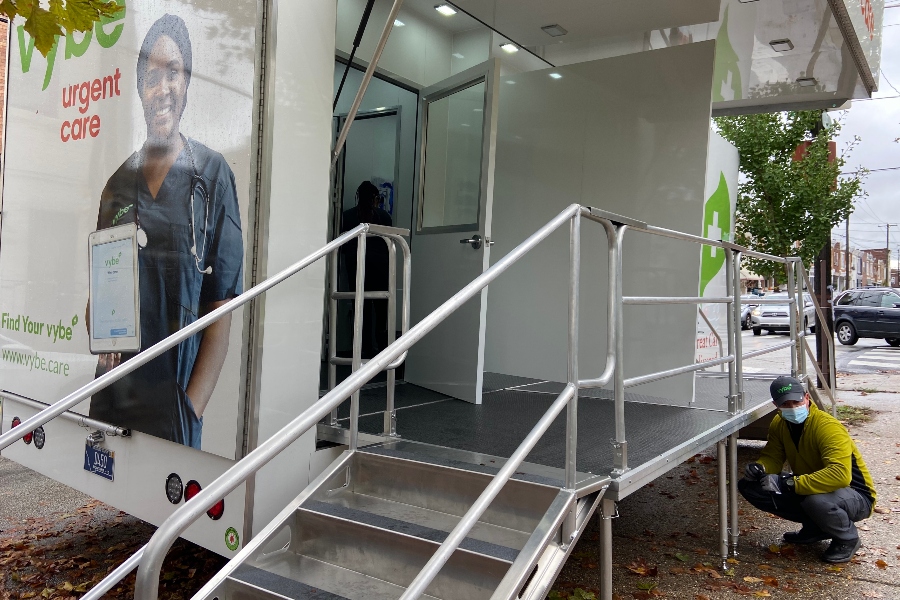 Testing trucks require minimal set up and breakdown, enabling teams to quickly pack up and change locations in as little as 15 minutes. / Isabella DiAmore

The testing trucks require minimal set up at their destination. The only attachments the Vybe team has to put together upon arrival at a location are steps and railings for patients and nurses to have easy access to get on and off the truck. Borden says his goal was to make everything as simple as possible. He also said any vehicle parts that break are relatively inexpensive to fix.

“I started my career back in the ’90s on the road with vehicles like this, not necessarily for testing, but for consumer promotions and I know how difficult it can be when there’s bulky, heavy, hard-to-set-up items,” Borden said. “When designing the trucks we knew not to over-engineer. We engineered [the trucks] to be simple and easy, and if something was to break it could be fixed by going to Home Depot or Lowes.” 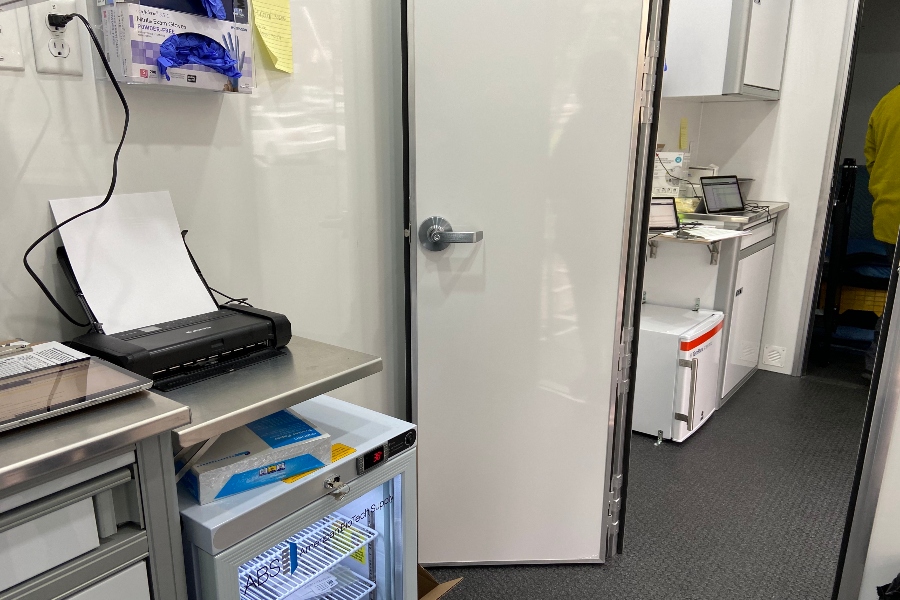 A door divides the two rooms in half and it is secured for two nurses to be able to sit inside and conduct testing for patients. / Isabella DiAmore

On the inside of the vehicle, you’ll find two rooms that mirror one another, but there’s a door that splits the two rooms in half. The two rooms allow patients to maintain distance in line outside the truck while also allowing healthcare workers inside to increase the number of patients they can test at each event.

“The inside of the vehicle is meant to keep the nurse and the patient safe. The rooms are air-conditioned and heated; it’s comfortable,” Borden said.

The rooms also offer positive air pressure, which means nurses are protected from potential exposure to viral droplets as the air leaves the room and does not circulate back in. 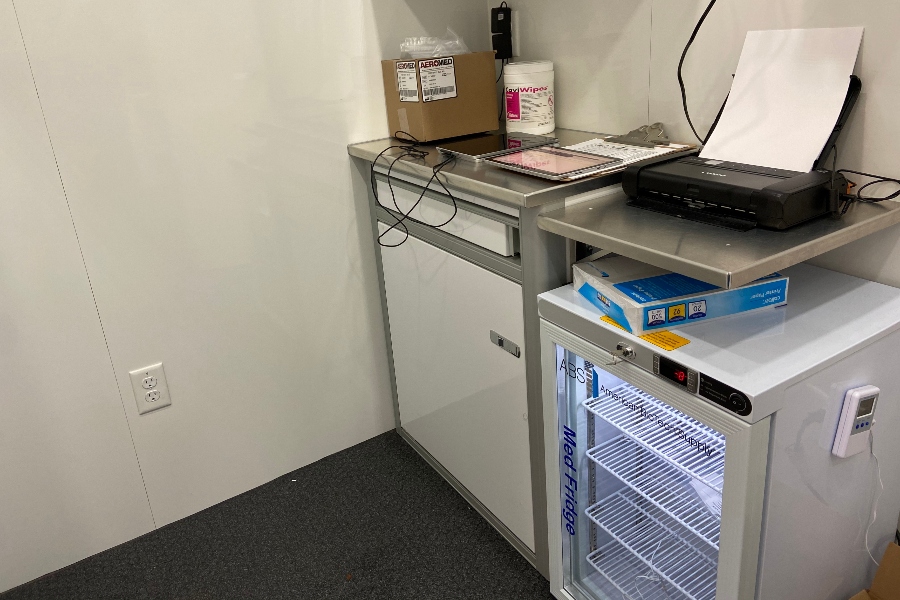 The truck offers cabinet space and a refrigerator for testing products, and potentially in the future, vaccinations. / Isabella DiAmore

Inside each room, you’ll find a small refrigerator and cabinets on both sides. The refrigerators can be used to store certain samples, tests and medications that require refrigeration for storage.

While this truck is currently only operating for COVID-19 testing, Aardvark’s Swiss-army-knife-like trucks have the potential to be used to administer much more, such as vaccinations and test sample analysis.

Aardvark Mobile Health’s trucks are built to be CLIA certified up to Biosafety Level 2, which means they operate with enhanced measures, such as mandatory hazard signage and personal protective equipment (PPE), similar to those required in labs that work with human diseases that pose a health hazard.

As Borden explained, the two rooms can toggle between positive air pressure, which is typically required for testing and sample collection, to negative pressure, which is primarily used in labs to prevent any cross-contamination from room to room. 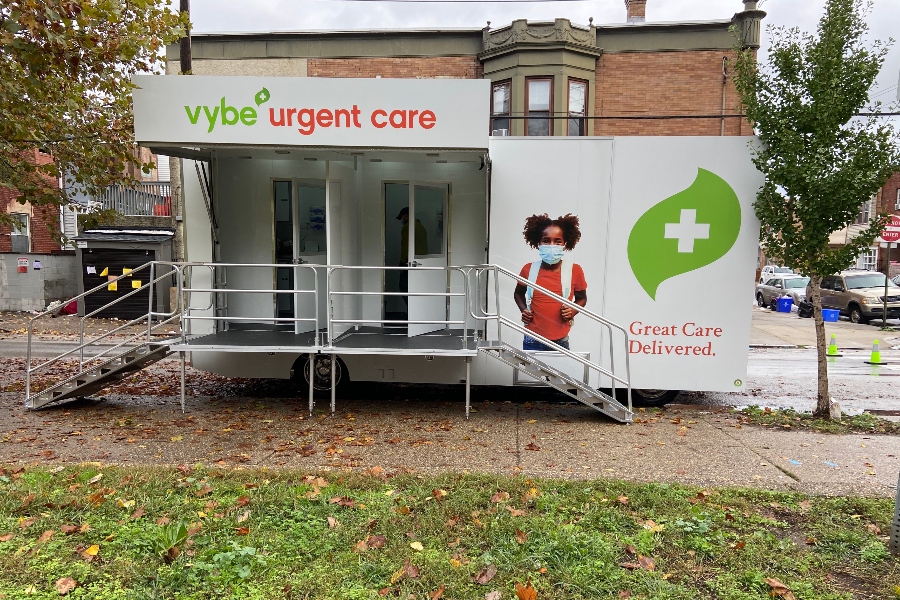 The two window feature allows patients to maintain distance in line outside the truck while also allowing healthcare workers inside to increase the amount of patients they can test at each event. / Isabella DiAmore

Since the trucks have both air conditioning and heat, the healthcare workers inside can make themselves as comfortable as they please. Borden says the trucks will continue to operate throughout the winter, even amid inclement weather.

“That’s when a driver’s part really kicks in to make sure, if it was to snow, all the snow would be off the vehicle and the pathway to the truck is safe,” Borden said. “That makes us different compared to other companies that are only using a tent.”

Most importantly, the vehicles are designed to go to where the people are. If the team is in a certain location and that area is not busy, they can quickly pack up within 15 minutes and go to a different location.

“This idea of putting our testing trucks to use through Vybe and the City of Philadelphia partnership allows them to go where hotspots are and where the people are,” Borden said. “It’s about convenience while providing a service to places in certain areas that may not have the luxury or ability to have testing going on. There are no limits to where this vehicle can go.”

In the future, Vybe’s pop-up clinic may offer flu vaccinations or even the COVID-19 vaccine, when it becomes available.