Biomeme has invented a coronavirus test that can be evaluated outside of traditional lab settings and can deliver accurate results in an hour or less. 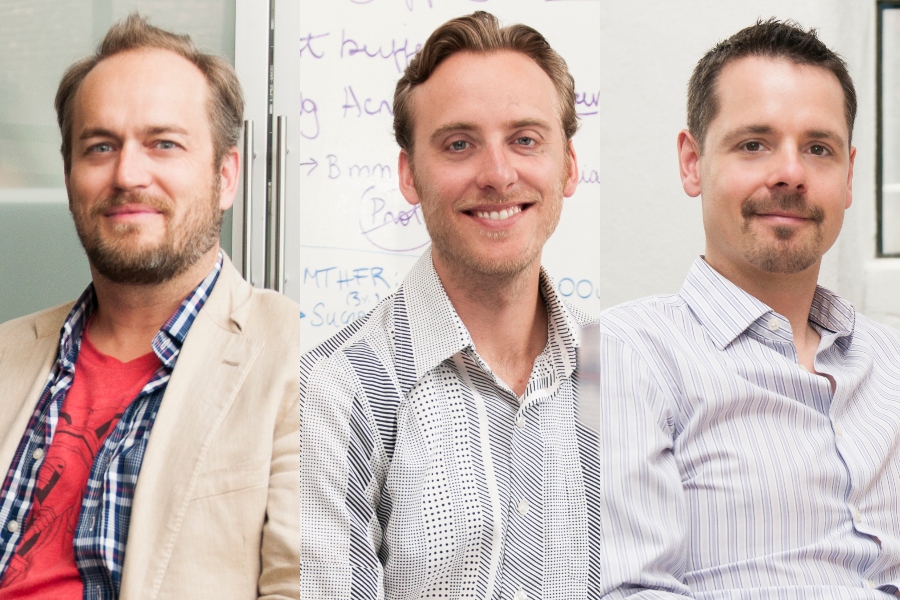 Who: Marc DeJohn, Jesse vanWestrienen and Max Perelman are the co-founders of the Philadelphia-based biotech company, Biomeme, home of the first iPhone add-on capable of performing molecular tests.

It all started with an idea, an iPhone and a hairdryer.

The trio had a shared interest in personal health and wanted to give individuals access to the same scientific capabilities that trained scientists have in a central lab. To do so, they’d have to combine their technical skills. DeJohn brought years of expertise in low-cost diagnostic instrumentation design; vanWestrienen specialized in polymerase chain reaction (PCR), a rapid method for making copies of DNA samples; and Perelman brought decades of international business savvy.

In 2012, DeJohn and vanWestrienen began prototyping an early version of a real-time PCR test in vanWestrienen’s grandmother-in-law’s basement in New Mexico. In the process of tinkering, DeJohn took apart a travel hairdryer and paired its components with that of an old iPhone 4. This creation became the company’s first diagnostic system. Many iterations later, in 2013, Biomeme’s founders showed their first prototype and preliminary data to one of the co-founders of Etsy, Jared Tarbell, who gave the team their first angel investment. In April 2013, the team moved to Philadelphia to attend DreamIt Ventures’ inaugural DreamIt Health accelerator for digital health, medical device and diagnostic startups. With a grant from Ben Franklin Tech Partners, they quickly expanded into a space at NextFab to focus on prototyping.

After a successful seed financing round in 2014, which included investments by Mark Cuban Companies, Dreamit Ventures, Ben Franklin Tech Partners, NextFab, and Independence Blue Cross, among others, the team was accepted into the University City Science Center’s Digital Health Accelerator. Biomeme later moved its offices to Old City where the team grew from three to 13 employees. The company has since grown to a team of 57 and runs all its business operations, software and firmware development, engineering, a BSL-2 molecular biology lab, a CLIA high-complexity clinical lab, as well as hardware and biology manufacturing from its headquarters in Center City.

What: Rapid molecular tests like the one Biomeme has created are not new. For years, scientists have used these tests to identify the unique DNA and RNA of viruses and bacterial infections like Tuberculosis, influenza and strep throat. Rapid molecular tests are popular because they’re known to deliver highly accurate results, often in 15 minutes or less. However, until recently, these tests have been bound to use in large central labs.

Biomeme’s flagship product is a real-time PCR thermocycler that can be used in or outside of a traditional lab setting, enabling on-the-go DNA diagnostics and real-time disease surveillance. Unlike most lab-bound molecular testing solutions, Biomeme’s entire platform — including the test; an easy-to-use sample prep kit; a hand-held, battery-operated PCR thermocycler; and a companion app that can operate on any smartphone — can fit inside a small backpack. From sample collection to results, Biomeme’s system can run as many as nine samples in less than 90 minutes. The same task might take days or weeks to accomplish using traditional molecular testing tools in a conventional lab setting.

Biomeme recently used its platform to develop a portable test solution to detect SARS-CoV-2, the virus that causes COVID-19.

When: In May 2020, Biomeme’s CLIA certified lab, One Health Labs, received an Emergency Use Authorization (EUA) from the Food and Drug Administration (FDA) to run its SARS-CoV-2 Real-Time PCR Test. In June 2020, Biomeme’s SARS-CoV-2 Real-Time PCR Test was approved for in vitro diagnostic use by Health Canada, the country’s federal department of health. The test was recently evaluated by third parties including, Northwell Health, New York state’s largest healthcare provider, and Sunnybrook Health Sciences Centre (SHSC), an academic health science center in Toronto, Ontario. When Sunnybrook used Biomeme’s SARS-CoV-2 test to evaluate positive clinical samples of Adenovirus, Human bocavirus, H1N1, SARS-CoV-2, and various other prevalent viruses, Sunnybrook reported that the test correctly identified all of the samples with 100 percent sensitivity and 100 percent specificity.

What it means: Inaccurate molecular tests for COVID-19 are a big problem. The Food and Drug Administration (FDA) has warned about several COVID-19 tests that have been shown to deliver false-negative results. False-negative results may cause asymptomatic people to believe they don’t have the virus and that they might be incapable of spreading it, when they may, in fact, still be infecting others.

In addition, the lack of access to fast, accurate test results has been a major challenge to effectively responding to the COVID-19 pandemic. The shortage of lab equipment and trained personnel means potentially infected people sometimes wait days to be tested and even longer to receive their test results. Even with drive-thru collection centers, samples must still be delivered to a lab for analysis and sometimes shipped to other states.

Biomeme’s solution can turn places such as drive-thru sample collection locations into satellite testing sites where results can be given on the spot — a big boon for improving COVID-19 testing, especially in locations where access to a lab or electrical power isn’t always an option.

Why it matters now: Biomeme’s founders say they are heavily focused on scaling and further automating their manufacturing of devices and test kits, while bringing critical steps in-house so they can better control the company’s supply chain. By fall 2020, when experts are expecting the second wave of the pandemic to hit, Biomeme is aiming to be manufacturing enough devices and test kits to test 100,000 people a day.

Despite unprecedented unemployment and layoffs nationwide, Biomeme is one of few companies that are hiring. The company has 10 open positions that they hope to fill with local talent.