The Grueling Recovery Journey of One of Pa.’s First Coronavirus Patients 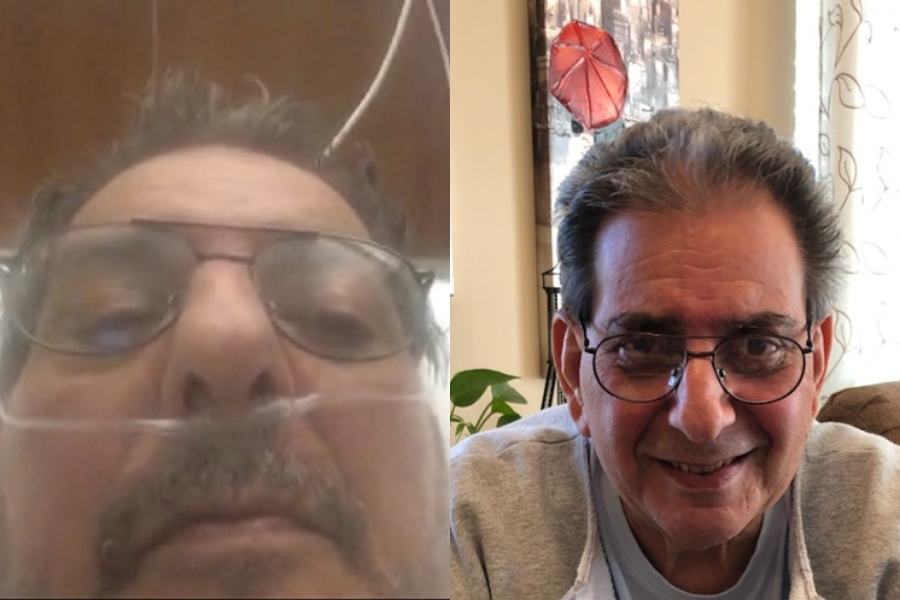 Dee Messina, one of Pennsylvania’s first COVID-19 patients, was also one of the first patients treated at the MossRehab CORE+ unit. / Courtesy

On March 7th, just one day after Pennsylvania reported its first presumptive cases of coronavirus, Dee and Joan Messina joined roughly 50 family members at a home in Montgomery County for a party to celebrate their great nephew’s first birthday. Two weeks later, Dee Messina, 77, was in an intensive care unit at Einstein Montgomery Hospital and as many as five of Joan Messina’s relatives who’d also attended the party had tested positive for the virus; two were on ventilators at local hospitals fighting for their lives.

Montgomery County health department officials refused to confirm whether they performed any contact tracing to determine how many of the party’s guests ultimately tested positive for the virus, citing privacy concerns. But two things are certain: members of the Messina family were among the earliest reported cases of coronavirus in Pennsylvania, and those who attended this party likely unknowingly contributed to the spread of coronavirus throughout the state.

In hindsight, Joan Messina says she and her husband never would’ve attended the party if they’d known then what they know now about how much damage the virus can do to the human body and how easily it spreads.

“The fact that there were 50 people at the party, and it seems like only people from my family got it, that baffles me. We still don’t know who the original carrier was,” Joan said.

Her husband Dee Messina is now one of the thousands of COVID-19 patients who must undergo physical therapy and rehabilitation to restore basic functions lost in the fog of medically induced comas, sedatives and muscle relaxers administered as part of their treatment for the virus. One of the region’s leading facilities for rehabilitation care — MossRehab — is working to help the most vulnerable COVID-19 patients recover from unexpected injuries. Dee Messina checked into rehabilitation there on April 15th.

Getting very close to death

The Messinas didn’t notice their symptoms until a few days after the party. Both Dee and Joan had a persistent cough and a slightly higher temperature than usual; they’d also lost their sense of taste and smell — what we now know are textbook symptoms of the virus. After a few days, Joan’s symptoms began to subside while Dee’s intensified, so he went to a nearby medical center to be tested.

At the time, the state Department of Health had only just begun to set up capacity for testing, some tests were rendering inconclusive results and the wait time for getting results was still relatively long. Dee waited almost a week before his test result came back revealing a positive diagnosis.

Joan took Dee to Einstein Montgomery Hospital where he was placed in a medically induced coma and intubated to enable a ventilator to assist his breathing, which was declining by the hour. At one point, Joan says doctors gave her husband a 10 percent chance to live.

Due to safety protocols put in place to curb the spread of the virus, Joan couldn’t be by Dee’s side, but the hospital arranged for them to connect via video calls. Every day, Joan would call and talk to her husband hoping that, despite his being unconscious, her words would give him the strength to pull through.

Fourteen days later, Joan got the miracle she’d hoped for.

“Within a few days, he went from needing 75 percent oxygen down to 60 percent and then one day they called me and told me he was off oxygen altogether. That, to me, was a miracle,” she said. “He’s 77. So many people at his age were dying from this.”

According to Joan, doctors tried several experimental treatments on Dee until he was well enough to have his ventilator removed and was awakened from his coma on April 9th. 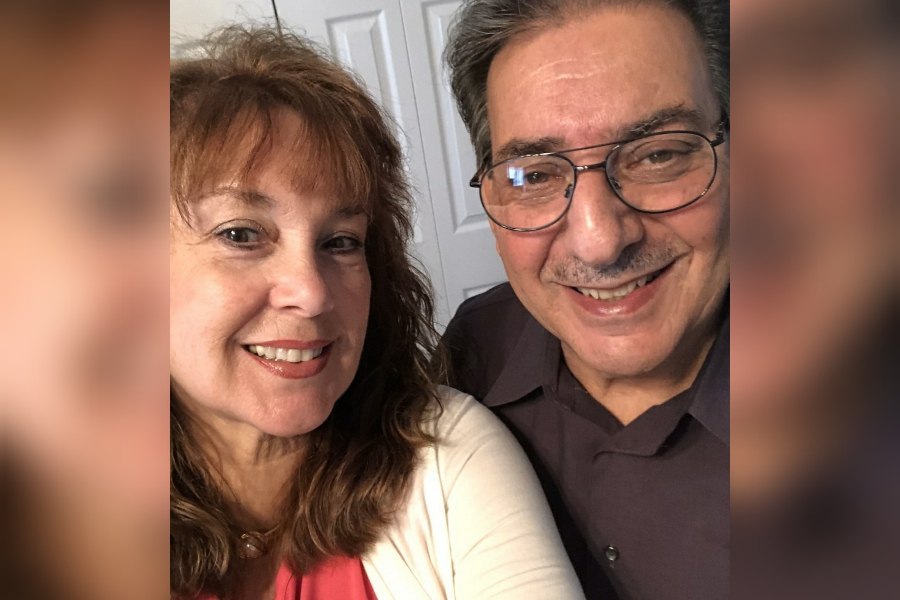 Over the two weeks that Dee had been comatose, positive cases of coronavirus in Montgomery County grew from 159 to more than 1300 cases. Dee awoke to the harsh reality that the mild illness he thought he had when he first entered the hospital had since taken the lives of 32 people in his home county and 338 people across the state. Fortunately, he’d survived but he soon realized the virus had wrought havoc on his body.

“When I woke up, I was very confused in the sense that none of my mechanical functions seemed to be working,” Dee Messina explained. “I couldn’t walk or write. I could barely talk, and I couldn’t really eat at first because I could barely hold my eating utensils. It’s a very demanding thing when all of a sudden, all those functions that are normal to you are not there.”

According to Alberto Esquenazi, the chief medical officer at MossRehab, 30 percent of COVID-19 patients who are severely infected could end up needing rehabilitation to regain functions like the ones Dee lost while he was sedated.

Esquenazi says it’s not unusual or infrequent that patients who have been sedated and ventilated for periods of time will experience injuries that require acute inpatient rehabilitation.

“Patients who have been infected by COVID have to be ventilated, so they sometimes have long periods of time where their ability to oxygenate their blood is affected and that can have impacts in their brain, in their muscles and their nerves, and even their heart and lungs,” Esquenazi explained.

“When their muscles are relaxed, they can’t really tell when they’re exceeding the pressure tolerance for their muscles and tissues because they’re unconscious, so they may end up with pressure sores or ulcers. They may also end up putting pressure on their nerves that can damage nerves, temporarily, and sometimes permanently.”

It’s a rarely discussed aspect of the toll coronavirus can take on the human body.

Because most doctors are so focused on trying to keep patients alive on the front-end, they have yet to consider how they’ll accommodate the need for specialized COVID-19 services in the realm of rehab and recovery.

In April, MossRehab Elkins Park became the first physical medicine and rehabilitation center in the country to establish an acute inpatient rehabilitation unit specifically designed to address the needs of the most severely affected COVID-19 patients. The CORE+ unit at Moss provides physical, occupational, and speech therapy for COVID-19 patients who have gone 72 hours without a fever and are at least seven days beyond their initial diagnosis.

The CORE+ unit is located on a floor that has an isolated hallway and elevator, and each room on the floor has its own bathroom. Patients receive care from designated staff who adhere to strict personal protective equipment requirements — all protocols designed to keep patients and staff safe.

“Our intent is to really get them to the highest level of function so they can return to their families and their communities,” Esquenazi said. “So far, all of the patients that have left the CORE+ unit have gone back to their community, not to another facility or nursing home for additional care, which is excellent.”

According to Esquenazi, the CORE+ unit can serve up to 12 patients at a time. It has been operating at full occupancy since it opened, and the waitlist for patients who are eager to receive care is growing. Esquenazi’s team at Moss has begun sharing its COVID-19 specific protocols with other hospitals across the region and around the country so they can establish similar units.

Fifteen days after Dee was admitted to the CORE+ unit for physical and occupational therapy, he returned home with most of his motor functions restored. Dee and Joan have since been retested and are negative for the virus. Their optimism about that result is tempered by inconclusive reports about whether the virus can strike the same person more than once.

In the meantime, Joan says, they’re playing it safe: wearing masks and keeping their distance, even from loved ones. She can’t imagine ever going to a party again, or at least, not any time soon.

“I don’t know if I could ever go to a party, or a restaurant or even go food shopping again. I have my groceries delivered, we watch online church services, we stay home because it’s scary,” she said. “We were blessed to survive it.”