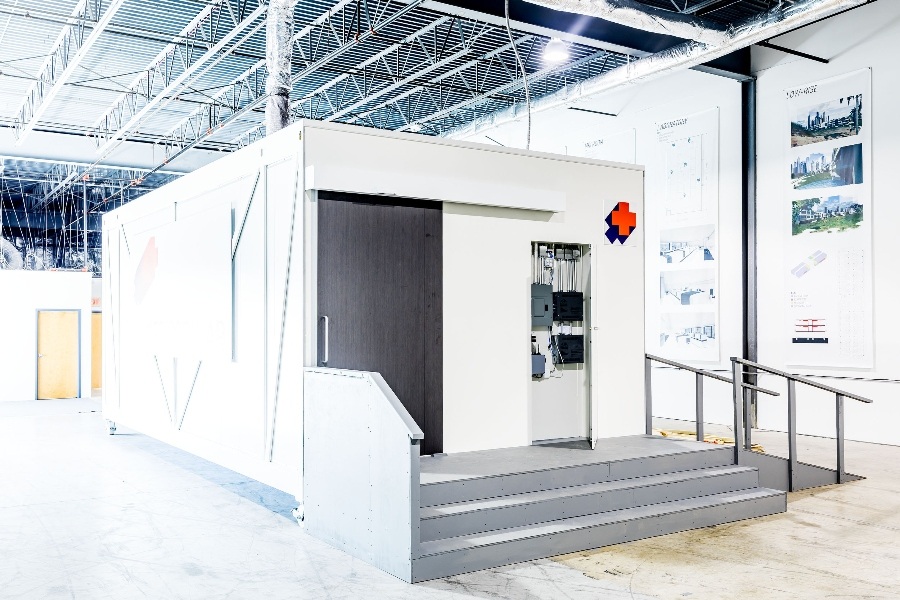 EIR Healthcare’s MedModular rooms are constructed in a factory and are designed to meet each individual hospital’s needs. / Courtesy

Hospitals and emergency rooms across the country are becoming increasingly overwhelmed with COVID-19 patients, forcing healthcare providers to think creatively about where and how they deliver care. In California and New York, two of the hardest-hit states of the coronavirus pandemic in the U.S., public officials have done everything from erecting mobile hospitals in public parks to setting up makeshift clinics on old Navy ships to accommodate critically ill COVID-19 patients. But the highly contagious nature of the virus means not every space is a safe space to facilitate care.

Philadelphia’s latest preemptive solution for an expected hospital-bed shortage may prove to be one of those unsafe spaces for coronavirus patients. Over the weekend, Temple University erected a makeshift hospital in the Liacouras Center on North Broad St. During normal times, before the coronavirus outbreak forced Philadelphia’s 1.5 million residents indoors on a citywide stay-at-home order, the 10,000-seat multi-purpose venue was home to raucous concerts and sporting events. The venue floor is now covered with cots and partitions that officials say are more likely to be used for regular emergency room patients than for patients with COVID-19. The idea is that if they can move regular ER patients to spaces like the Liacouras Center, that will free up more isolated rooms in actual hospitals where the virus is more likely to be contained. But what happens if all those rooms are filled, too? 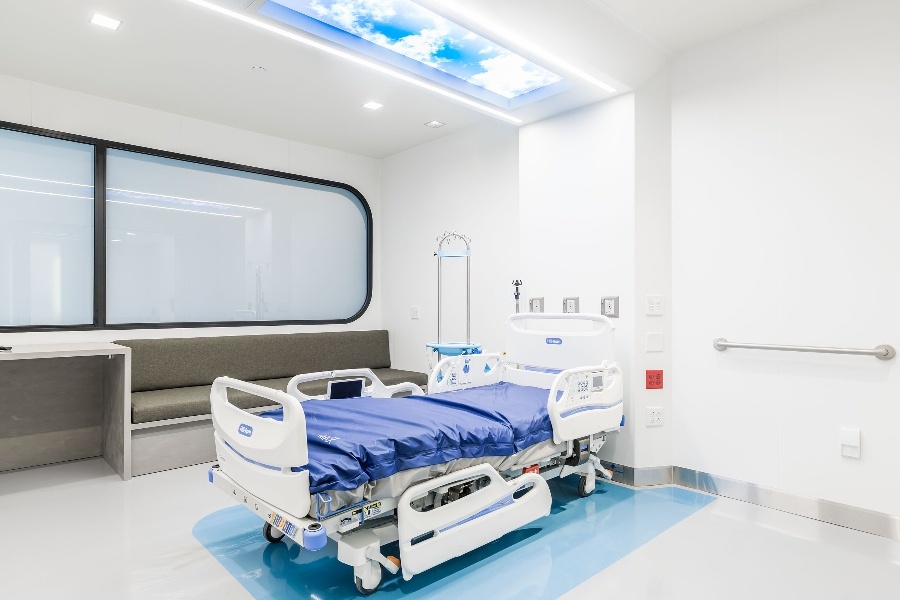 EIR Healtcare typically works with hospitals that are constructing new buildings. Its MedModular rooms are built in a factory at the same time a hospital is constructing the shell of a new building. In a typical scenario, EIR meets with the hospital team to customize the design. When the building is finished, the rooms are transported to the hospital site and slotted into the shell and core of the building, reducing the overall construction time by 10 to 30 percent, depending on the size of the project.

EIR’s rooms were never meant to serve as standalone care spaces, but Geiger says they can, and as more local hospitals start to feel the pinch for space, he suspects they will.

“We’re normally talking with clients about these rooms going into a permanent building,” Geiger explained. “Over the last couple of weeks, especially, this has now transitioned to conversations about whether we can take this product and just put it somewhere. So we’re in daily conversations with folks up in New York about whether we can put them in the convention center or a warehouse because they have this immediate capacity issue.”

EIR’s “smart rooms” include features like touchless doors, faucets and sinks to avoid the spread of germs, and visual displays and handheld devices designed to improve patient satisfaction and efficient care. The prefabricated rooms originally made waves when they debuted on Amazon in early 2019 with a $285,000 price tag. Geiger says a 350-square-foot room like the one advertised on Amazon could cost around $400 per-square-foot, depending on the hospital’s specifications; he says that’s not much more expensive than traditional healthcare construction pricing.

“What we’ve found so far with the clients we’ve worked with is that we don’t cost any more than if you build a similar room traditionally; we’re about the same price. And the price will vary depending on the project and what the client is putting in the room,” he said.

One of the key features of MedModular rooms is that they can be built with negative pressure, meaning the rooms can be customized to include a ventilation system that prevents contaminated air from escaping. The Centers for Disease Control (CDC) recommends the use of negative-pressure rooms to prevent airborne viruses like Ebola from spreading to hospital hallways and corridors.

“Negative pressure rooms would be preferred when you’re intubating a patient or when you’re giving particular types of respiratory treatments that would generate aerosol,” she said. “We do everything we can to keep COVID-19 patients in private rooms, in isolation, especially when they’re really critically ill. The best thing you can do is try to keep it contained.”

With 1,315 confirmed positive cases as of March 31st (87 of whom have been hospitalized), Philadelphia has yet to see the patient volumes that cities like New York have been completely overwhelmed by. At the moment, Philly nurses say they’re doing more prep and procedure adjustments than actual caring for COVID-19 patients in the ER. Bon Ku, an emergency medicine doctor for Jefferson Health, says he’s keeping in touch with his doctor friends in New York to get guidance on what to expect in the weeks ahead.

“Many hospitals in the U.S. are at imminent risk of running out of spaces to treat patients because of the influx of COVID-19 patients,” he said. “I speak with my New York City colleagues a lot because I think we’re only one or two weeks away from being where they’re at now. So I’m always talking to them, seeing what their situation is like so we can be prepared. It’s actually been eerily quiet in the emergency department, but I think that’s going to change in a week or so.”

Perhaps the biggest benefit of MedModular rooms is how quickly they can be produced. EIR Healthcare is in talks with several hospitals in the region and across the country about using its rooms. If Philly hospitals decide to pursue this option, Geiger says his company can build as many as 75 rooms in a week’s time.