Q&A: Everything You Need to Know About the Future of CRISPR-Cas9

Penn's Kiran Musunuru talks to us about the technology that has been both praised and criticized for its ability to alter human DNA and potentially cure disease. 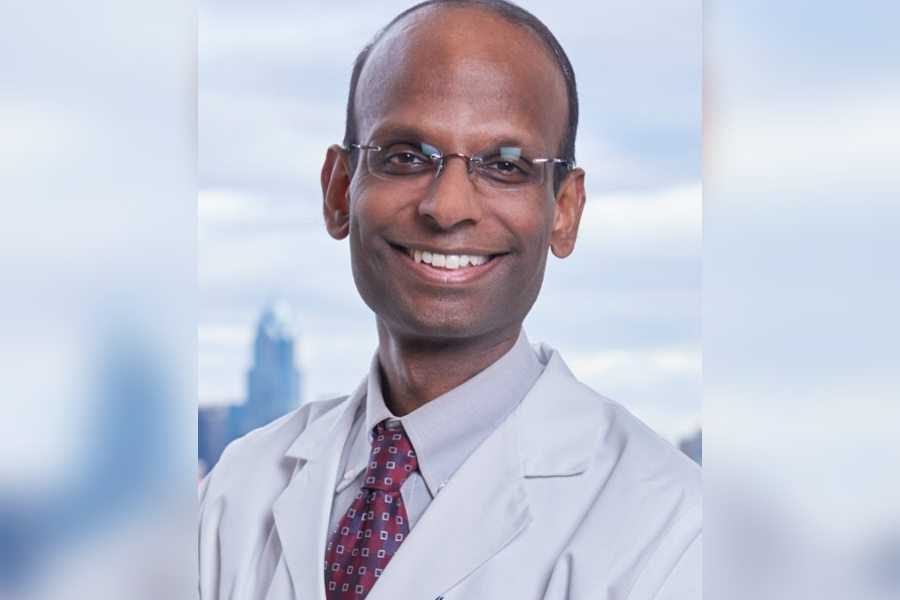 Kiran Musunuru is an associate professor of medicine in genetics in the Perelman School of Medicine at the University of Pennsylvania. / Courtesy

CRISPR, the technology being used to edit genes in humans, remains polarizing. On one end, detractors argue that using the technology for certain purposes, like performing gene editing on embryos, is not only dangerous but unethical. On the other end, proponents say CRISPR has the potential to revolutionize human health, and early data shows they might be right. Despite a medical community that is still split on the issue, researchers in the U.S. are kicking tests of the technology into high gear. Several clinical trials have launched in the U.S. testing CRISPR’s ability to treat various diseases.

NextHealth PHL spoke with Kiran Musunuru, an associate professor of medicine in genetics at the Perelman School of Medicine at the University of Pennsylvania about the true potential of CRISPR technology and how we can expect it to evolve in the future.

NextHealth PHL: What exactly is CRISPR?
Musunru: CRISPR is sort of a catch-all term that covers a variety of technologies. If you’re saying CRISPR, you’re referring to a broad set of tools that may do it in different ways but are all intended to do a form of gene editing or genome editing.

How do basic CRISPR technologies work?
The simplest form of CRISPR, what I call version 1.0, is the original standard CRISPR that most laboratories and companies interested in developing new therapies use. It is a two-component system. There is a protein and an RNA molecule that’s about 100 bases in length. The protein and the RNA molecule come together to create what we’ll call a molecular machine and the purpose of this molecular machine is to scan across any DNA molecule it encounters. So if you put the CRISPR-Cas9 into the nucleus of a human cell, this molecular machine will scan the entire genome.

The machine has two key functions built into it; the first is a GPS function. When you change the first 20 bases in a DNA length (the first 20 bases is basically the address) to whatever address you want, the GPS function makes the machine go through the entire genome and find the sequence that matches the address. The second function of this machine is to protect the genome, like a search-and-destroy function. You put in the address, it goes to that matching place in the genome and then it makes a cut in the DNA.

Cutting the DNA is actually a bad thing but the cells have ways to try to fix that break, and the actual editing is a result of the cell trying to fix that break in the DNA, not from CRISPR itself, interestingly enough.

How does CRISPR turn a break in someone’s DNA into a good thing?
There are a few ways this can happen. The safest thing you can do is to break a gene or turn off a gene. The metaphor I like to use is to think of the whole genome as a book, and each chromosome in the genome is a chapter in the book, and each gene is a paragraph in the chapter. Together, it all has a meaning. But let’s say you had to turn off a gene, the equivalent of making that break in the DNA would be like tearing the page through that paragraph. So, the simplest thing the cell can do and will try to do is to simply tape that tear back up. But as you can imagine, sometimes you tape it back up and it’s fine, the paragraph is still legible and the meaning is still there, and it eventually heals and functions like it did before. But in this case, that’s actually not what you want. The outcome that you want with CRISPR is that you actually want to turn off the gene, not to rip it and make it the way it was before.

What has to happen is when you make the tear, the tear is so rough, you get those jagged edges and you try to tape it up but it doesn’t quite fit, the letters don’t quite match up. You tape it up as best as you can but its illegible, some letters are lost, and the meaning of the paragraph is lost. That’s exactly what happens with gene editing, the cell tries to repair that break in the DNA, doesn’t get it quite right, and loses some bases and that messes up the gene and turns it off.

However, in this scenario, you can’t really control what happens. All you can hope for is that that tear you make is going to mess up the gene and that’s okay if all you’re trying to do is turn it off. Most of the trials underway now are about turning off the gene, and they’re all taking advantage of the fact that it’s relatively easy to mess up genes and turn off genes. Just like tearing a page — it’s crude, but it’s effective.

There’s CRISPR 1.0, this first generation of the technology that’s not very precise and is a bit arduous. What are the newest forms of CRISPR and how are they better than earlier versions of the technology?
There is a newer form of the technology called base editing that keeps the GPS function intact but removes the cutting function. In place of the cutting function, it attaches another machine onto CRISPR and makes chemical modifications in certain areas. This version of CRISPR is more like a search and replace. CRISPR provides the search but then another machine attached to it is doing the replacing. With base editing you can make more precise changes, but only rarely will it make exactly the type of change you want.

The latest form of CRISPR is called prime editing, and we still don’t have a good sense of how well it works because it’s so new. What’s tantalizing is that it looks like it can turn CRISPR into a precise word processor or an eraser that allows you to erase a letter and put in a new letter. CRISPR is very much a wave of technology, and as it gets better, it’s going to allow us to do more and more powerful things.

There are some extreme ideas about what CRISPR can do. Some believe scientists can use the technology to alter hair or eye color or give patients superhuman athletic or intellectual abilities. Is any of this possible with CRISPR?
It depends on what traits you’re talking about changing. Since eye color and hair color are controlled by single genes, you could possibly make a single gene change with CRISPR. The problem is, how do you get CRISPR to go where it needs to go to change your hair or eye color? How do you get it into all your hair follicles or through all the cells in your eye? It might be a simpler change to make, but it might not be easy to do in a live adult. Scientists have now edited human embryos, resulting in live-born people. There’s been a lot of ethical debate about whether that’s a good thing. If you want to change something like hair color in a single cell embryo made through in-vitro fertilization, that’s a bit different and might not be as difficult.

What has CRISPR been used to treat so far and what could it be used for in the future?
There are multiple trials underway to treat rare liver disorders. More recently CRISPR has been used in clinical trials at Penn where at least three patients have been dosed using CAR T immunotherapy. In this case, they’re trying to make patients’ cells more effective at fighting cancer. But again, that editing is being done outside the body.

There are some things that seem like they would be difficult to treat, but if it’s the right type of disease and you can get CRISPR to where you need it to go, it might work. One example is in sickle cell disease. The cells that you need to fix in sickle cell disease are in the bone marrow. Fortunately, bone marrow is relatively straight forward to work with. You take the cells out and edit them with some form of CRISPR outside of the body and then put them back in.

Something like cystic fibrosis would be much harder because it affects the entire surface of potentially multiple organs inside the body. It’s much harder to deliver CRISPR to all of those places in the body.

There are two other clinical trials that have started in the U.S. One is from a company called CRISPR Therapeutics to treat sickle cell disease and similar blood disorders. There’s another trial underway to treat a genetic form of blindness and this editing would actually happen inside the body.