From new investment models for biotech to ice cream as medicine, the new city-wide innovation fest explored what's next for the city's science sector. 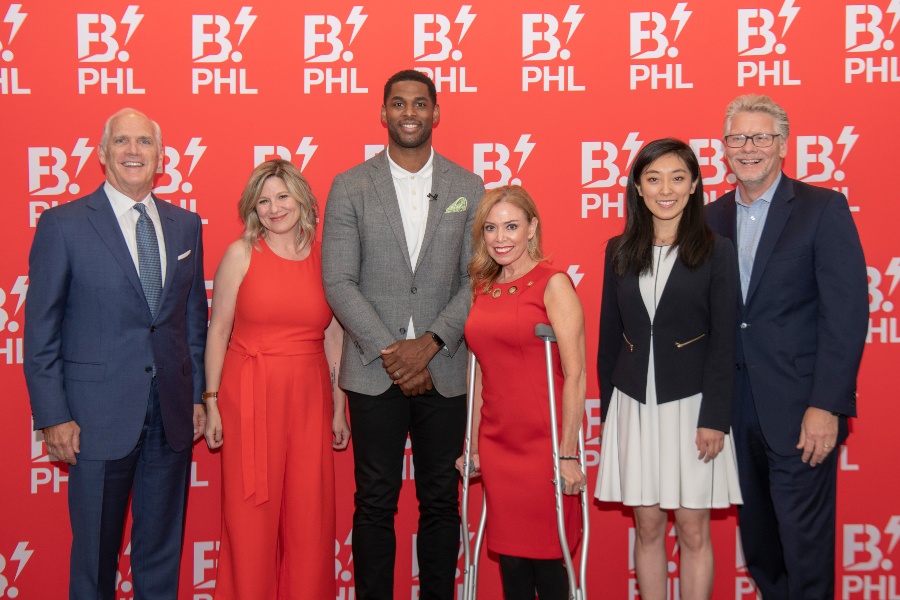 Celebrating the announcement of B.PHL, Philadelphia’s first city-wide Innovation Festival, are, left to right: Daniel J. Hilferty, CEO of Independence Health Group and chairman of the board of directors of The Chamber of Commerce of Greater Philadelphia; Michelle Histand, director of Innovation at Independence Blue Cross; Marques Colston, former NFL player, founder and managing partner of Dynasty Innovation, and managing director of the Center for Innovation at Virtua Health; Sheila Hess, city representative for the City of Philadelphia; Rui Jing Jiang, co-founder and CEO of Avisi Technologies; and Rob Wonderling, president and CEO of The Chamber of Commerce for Greater Philadelphia. / Independence Blue Cross

Philadelphia’s ever-expanding healthcare industry was a key topic of discussion during last week’s B.PHL Innovation Festival. A team of local titans in business, healthcare and science, including Comcast, Independence Blue Cross, and the University City Science Center, organized the three-day, citywide festival that attracted thousands of attendees across nearly 200 sessions.

Through curated panel discussions, interactive workshops and other events, the festival invited the region’s leaders to explore new ways to advance Philly’s reputation for innovation. In conversations about what makes Philly truly unique, healthcare industry leaders tackled tough questions about what’s next for gene and cell therapy, the pharmaceutical industry and biotech entrepreneurs.

NextHealth PHL attended several sessions during the new festival. Here’s what we learned: 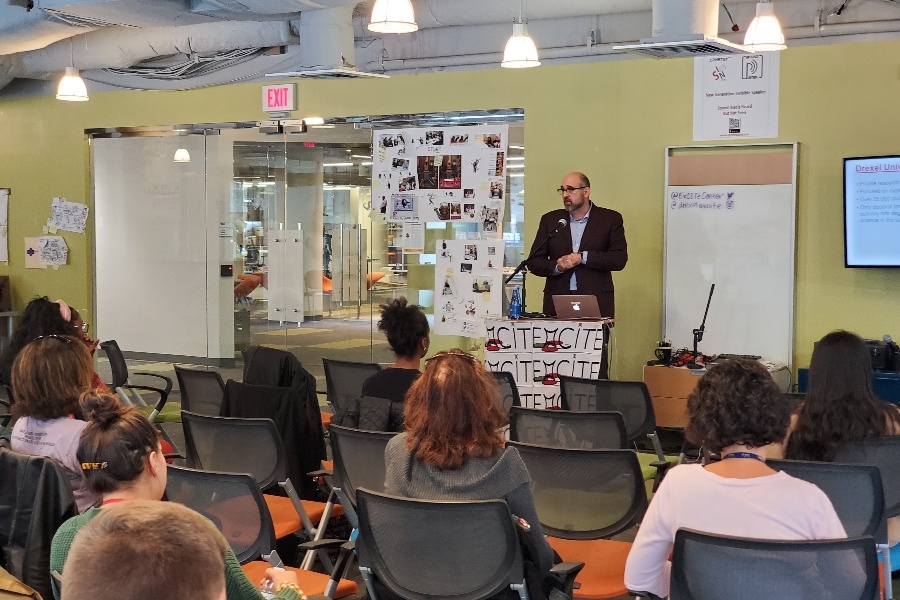 Jonathan Deutsch, a professor in the Department of Food and Hospitality Management in the College of Nursing and Health Professions at Drexel University explains the field of culinology during the 2019 B.PHL Innovation Festival. / Queen Muse

Ever heard of therapeutic ice cream?

Well, it’s one of several products being tested by experts at the Drexel University Food Lab. In the B.PHL session, “Is Food the Future of Pharma? Real Food Alternatives to Drugs,” Jonathan Deutsch, a professor in the Department of Food and Hospitality Management in the College of Nursing and Health Professions at Drexel, explained how his department is working to advance the field of culinology, a newly-minted industry at the intersection of culinary arts and food science.

Deutsch spoke to a small group of engaged attendees at Drexel’s Excite Center about several partnerships his team of experts and students has formed with healthcare organizations and major food companies like McCormick, Hershey, and Aramark to design food alternatives to pharmaceutical drugs.

As an educator, Deutsch emphasized the importance of teaching students how to take the art of cooking to new levels.

“We have to do more than just teach people to cook,” he said. “We have to teach them to think about how specific healthy foods, rather than drugs, can be used to target disease and get them involved in solving real-world problems.”

Participants in the interactive session got an opportunity to taste three products, all aimed at replacing a traditionally prescribed medicine.

For seniors who despise the taste of Ensure but desperately need the nutrition that traditional protein drinks provide, Deutsch’s team worked with the United Health Group to develop a therapeutic ice cream that has fewer calories and more protein per serving than leading ice cream brands on the market.

For patients who experience opioid-induced constipation after major surgery, Deutsch’s team and members of the department of integrative medicine at the Children’s Hospital of Philadelphia (CHOP) created a candy bite made with stool softening foods like coconut fat, chocolate, dates, prunes, figs, and almond butter. The treat is meant to serve as a real food replacement for traditional stool softeners that are known to harm the gut microbiome.

And for kids on the autism spectrum with selective eating habits, Deutsch’s team worked with Drexel’s Autism Institute and one child’s care team to create a crunchy protein bite that included all of the nutrients the child wasn’t getting from the soft foods she’d refused to eat, like chicken, eggs and cheese. Deutsch says the healthy snack can be customized to meet an individual child’s nutrient deficiencies.

I tried all of these new food medicines at the B.PHL event and can confirm they all tasted great, especially the therapeutic ice cream!

Deutsch says his team’s work could expand to create solutions for other conditions like diarrhea and dehydration (a tastier, carcinogen-free alternative to Pedialyte, anyone?), or Celiac disease and irritable bowel syndrome (think: anti-inflammatory, gluten-free pizza crust).

According to Deutsch, it’s all about getting good ingredients into foods that patients will eat without being coerced.

But can food ever really replace traditional pharma drugs or become the next form of personalized medicine? According to Deutsch, absolutely:

“Our current system is so focused on this idea that whatever your problem is, there’s a prescription for it. Using food and prescribing food is a little bit more cumbersome, but it has a lot of potential. One of the challenges is that physicians are not well educated about the benefits of food. So, they may say ‘you need to lose weight’ but they’re often not super concrete about what you’d need to eat to make that happen,” Deutsch said.

He added: “The field has not evolved yet to the point where they can say ‘here are some foods that were developed specifically for this condition and that you might enjoy.’ We’re not quite there yet. But I think insurers are interested, and the technology and infrastructure are there. It’s totally doable, just needs investment.”

There are gaps in Philly’s life sciences ecosystem … but with a little money and mentorship, we can fill them 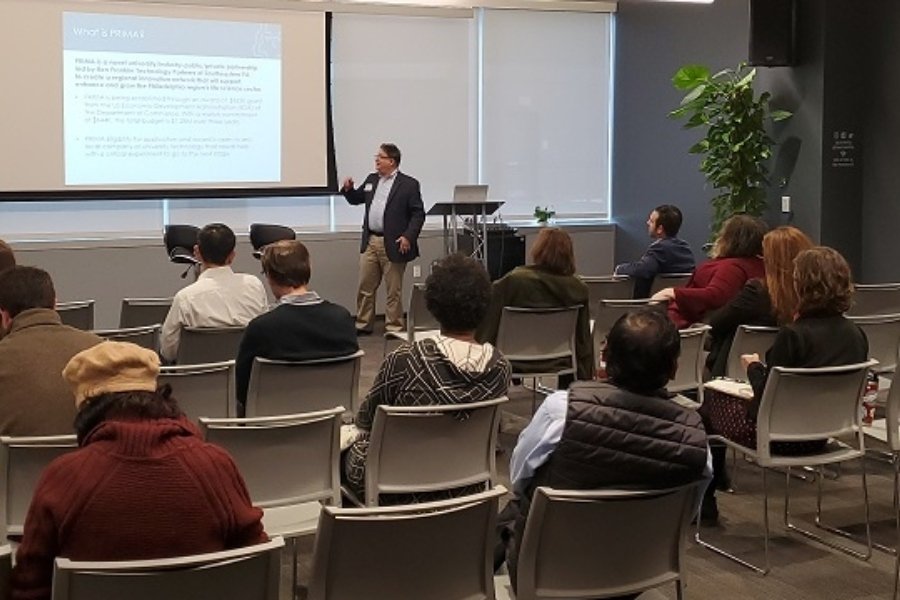 The Greater Philadelphia Regional Integrated Medicine Alliance (PRIMA) is not a traditional venture fund. Anthony Green, vice president of the technology commercialization group at Ben Franklin Technology Partners (BFTP) emphasized this point at the B.PHL session, “PRIMA and the Future of Life Sciences in Philadelphia,” where aspiring entrepreneurs gathered to learn how the region’s largest tech investor could help their companies grow to the next level.

“We’re seed investors but we’re also a nonprofit, so the money that comes in when a company we invest in succeeds goes right back on the street to help other companies,” Green explained.

PRIMA is a virtual public/private partnership focused exclusively on nurturing the region’s biotech/pharma technology ecosystem. In August, BFTP scored a $600,000 grant from the U.S. Department of Commerce’s Economic Development Administration (EDA) to support the program’s efforts.

“The idea is to help them get from soup to nuts. We connect them with service providers that will work with companies through the entire process to market and beyond. Our job is to continue to make sure the companies we fund are successful even after they’ve secured an FDA approval for a product,” Green said. “We also provide a lot of mentoring because, again, if they’re not successful, we’re not going to get our money back and if we don’t get our money back, we can’t put that money back out there for other companies to use to grow.”

Cellicon Valley can grow … with just a bit more collaboration

Cellicon Valley, Philadelphia’s thriving gene and cell therapy sector, already has so much of what you’d expect to find in a leading healthcare innovation hub.

Big pharma? Check. Almost 90 percent of pharmaceutical and biotech companies have an office in the area.

Bigwig funders? Check. Philly ranks third in the country for its federal funding from the National Institutes of Health and venture capitalists are getting hungry, almost doubling their investments in Philly-based companies in 2018.

So, what’s stopping the city from taking it a step further?

According to expert panelists at the B.PHL discussion, “Putting Cellicon Valley on the Map: Philadelphia’s Scientific and Medical Advancements,” the missing ingredient is cooperation.

“We need to partner with people outside of the room, and we need to collaborate,” Dr. Dario Altieri, chief executive officer of The Wistar Institute, told attendees at the event. “We don’t do that enough here in Philadelphia. It’s better than places like New York, where those institutions eat each other alive every day, but we have to do a much better job.”

Altieri reinforced the idea of sharing procedures, protocols, and especially patient information between the various health centers, citing Wistar’s partnership with all nine of the region’s academic medical institutions as a model for the future.

“None of us is smart enough to figure it all out by themselves,” Altieri added.

Vice-Chair of the Department of Medical Oncology at the Cancer Treatment Centers of America, Dr. Arturo Loaiza-Bonilla, echoed Altieri’s sentiments.

“I talk to colleagues that work at different institutions — we’re all friends!” Loaiza-Bonilla said. “But when you talk about institutions themselves, they don’t talk to each other. We’re all great, but we’re not coming together as a community.”

“When you’re early in a startup, you don’t have the money to pay for people in every single field that your product touches on,” Wronko said. “There are initiatives like UPA and Building 3.0 that are putting access to shared lab spaces back into our culture. It’s important to put our egos aside, to seek out collaboration and to not be afraid to shoot for the stars.”