Villanova University professor Dr. Qianhong Wu has invented a "Smart Brain" that simulates exactly what happens in the brain during head injuries. 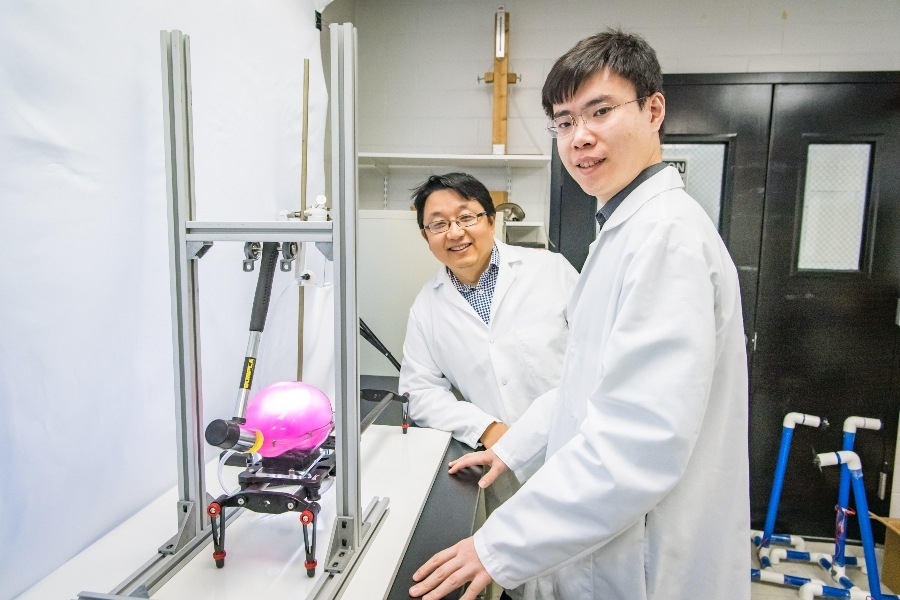 “Smart brain” sounds redundant because aren’t brains already inherently smart? But truth is, even the slightest head injury can cause major dysfunction in the human brain, sometimes rendering it completely void.

Each year, roughly 2.5 million people in America suffer traumatic brain injuries (TBIs); 50,000 of those injuries result in death and another 80,000 end in permanent disability, according to the Brain Trauma Foundation. Despite the frequency of TBIs, doctors still know very little about what happens in the brain when an injury occurs.

Dr. Qianhong Wu, director of the Cellular Biomechanics and Sports Science Laboratory at Villanova University, may have invented a way to not only capture exactly what happens in the brain at the point of impact but also provide guidance to prevent similar injuries in the future. Six years ago, Wu created the first iteration of what he calls the Smart Brain — a lifelike replica of the human brain including a transparent skull, brain matter, and watery cerebrospinal fluid. The Smart Brain technology also includes a system of high-speed cameras, accelerometers and sensors that allow researchers to track and capture the motion of brain matter. Earlier this year, Wu was awarded a patent for his biomimetic model of the brain and skull.

NextHealth PHL spoke with Wu to learn more about the Smart Brain and how it could help improve understanding of chronic traumatic encephalopathy (CTE) and other neurodegenerative diseases.

NextHealth PHL: What was the standard approach to understanding TBI before the invention of the Smart Brain?
Dr. Wu: Typically, when a person has an injury to the brain, they’ll go to the hospital and the doctor will ask them a series of questions. Based on the answers to those questions, the doctor will try to determine whether there has been any loss of memory. If they suspect memory loss or any serious response to the injury, they conduct an MRI scan. But MRIs are very costly, and, even with an MRI, it’s hard to locate exactly where the brain is injured. In the past, doctors have used a computational approach that lacked experiential verification. In my lab, we can recreate the impact and the model can tell us exactly where a person got injured so the doctor can just focus on that part of the brain; that’s why we call it a smart brain. 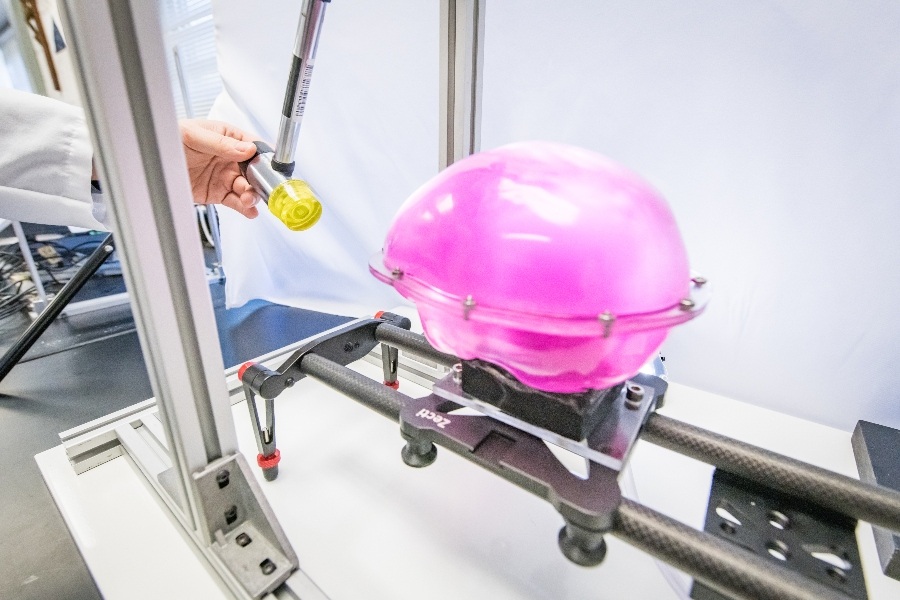 The Smart Brain is enclosed in a bright pink translucent casing that is made to mirror a human skull. / Paul Crane

There are lifelike versions of other human organs like the lungs or the heart. Why hasn’t anyone developed a life-like replica of the human brain until now?
The human brain is very soft, and this is difficult to replicate. We had to find a special kind of material. We also had to suspend it in a liquid environment and enclose it in a transparent skull because if you develop an artificial brain that’s okay but you need to see what happens when the whole head is exposed to this kind of impact and how the brain responds to that. So it’s more than just creating a replica of the brain. We had to recreate the whole brain environment to be able to see the whole picture because brain injury impacts not just the brain itself but the whole system.

What materials did you use to create the Smart Brain?
We tried all different kinds of materials. We’re actually still making efforts to find the best material, but at this stage, we’re using hydrogel material that closely mirrors the brain. It’s not exactly the same material as the brain, but we’re trying to see if we can simulate it as close as possible to the real thing. There are also mechanical properties in the matter of the brain itself. We’ve created a combination of materials and tried to make a brain that comes as close as possible to those mechanical functions. 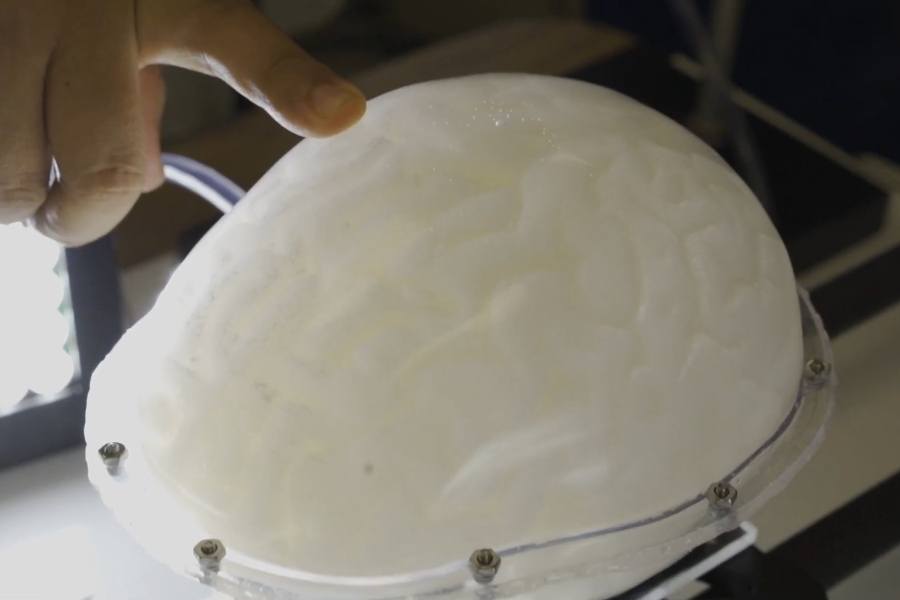 The Smart Brain was created with a hydrogel material that mimics the squishy texture of brain matter. / John Welsh

What disciplines are represented on your research team and what did each specialist bring to the table for this creation?
We have a multidisciplinary team that helped us identify the right materials. We have people who are experts in instrumentation that help us identify the different sensors we need to capture the motion in brain matter. We’ve also collaborated with doctors from Jefferson Hospital’s Comprehensive Concussion Center who’ve helped us compare my model with human MRI results to see if my model can accurately predict the point of impact. And we have very good students that have made very significant contributions to the project.

How many iterations did it take to arrive at this patented version of the Smart Brain?
I don’t even know how many times we’ve tried and how many versions we’ve had. There have been so many. We didn’t keep count but maybe we should have. We’ve been working on this for roughly six years and my student and Ph.D. candidate Ji Lang has been working on this consistently for about four years.

Chronic traumatic encephalopathy (CTE), one of the most debilitating neurodegenerative diseases, can only be diagnosed after death. Could the Smart Brain technology help doctors identify CTE sooner?
I think so. If you think about it, this is just a starting point for an entirely new direction in brain biomechanics. With this model, we can look at the spinal fluid that is enclosed between the brain matter and the skull and look at each part of the brain and the mechanical workings of the brain. This has very important applications in any brain biomechanics efforts and any study related to the brain.

Now that your technology is patented, what’s next?
We continue working on really trying to improve our technology to make it an even smarter brain. So, from a fundamental research point of view, we are looking at using different techniques to look at brain injury. We’re also trying to use our model to develop new types of protective gear, including helmets. My dream is to form a research center focused on these advanced forms of brain biomechanics to research and explore this new direction.