Robots Are Taking Over Rehabilitative Medicine

Moss Rehabilitation Center’s Dr. Alberto Esquenazi, who switches between a prosthetic arm and hook, says the bionics boom is not only good but also necessary. 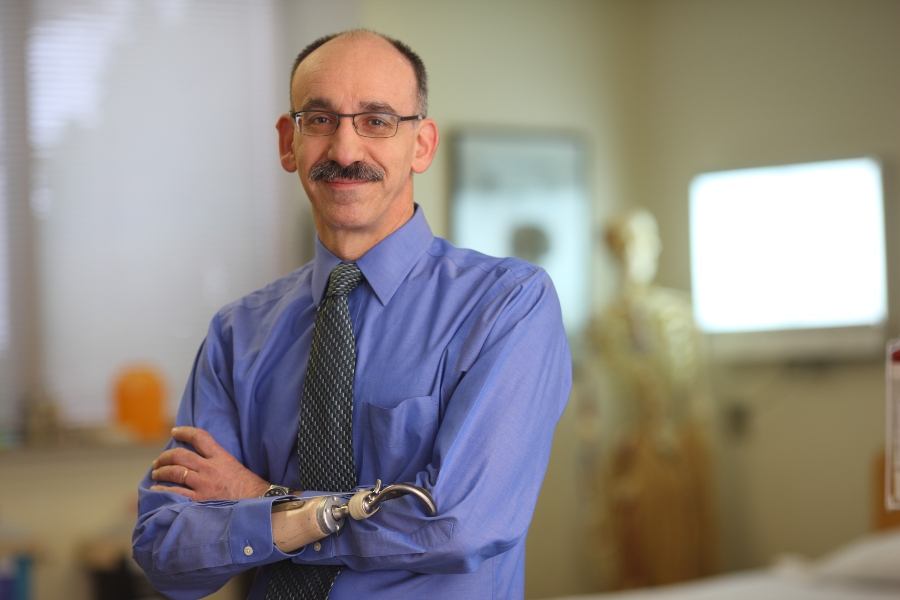 There was a time when losing a limb meant losing a bodily function forever. The idea of bionics was nothing more than fodder for television. Shows like “The Six Million Dollar Man” fantasized about a day when doctors would replace human limbs with powerful artificial body parts, giving mere mortals superhuman powers.

“Gentleman, we can rebuild him, we have the technology.” This notion proclaimed in the show’s opening is no longer science fiction, however. Rehabilitative robots — whether assistive or exoskeletal — have become powerful tools in speeding up recovery for people suffering from movement disorders, lost limbs or impaired physical functioning. Here in Philadelphia, Moss Rehabilitation Center is home to the nation’s largest collection of robotic devices for rehabilitation. The Elkins Park-based rehab center has become a leader in rehabilitative medicine due in large part to its very own Steve Austin, Dr. Alberto Esquenazi.

Esquenazi was a medical student studying to become a surgeon in his native Mexico when a chemical accident resulted in the loss of his right hand, some 40 years ago. He now uses both a prosthetic hand and a hook depending on the situation. Through his role as the chief medical officer at Moss, Esquenazi has refocused his love of medicine toward using, developing and managing clinical trials for robotic devices to help his patients recover from physical injuries.

Esquenazi is one of many physicians championing the use of rehabilitative robotics. His mentorship led to the Food and Drug Administration’s (FDA) approval of ReWalk, the first commercial bionic walking assistance system approved for personal use in the United States.

“Dr. Amit Goffer, ReWalk’s founder who was inspired to develop an exoskeleton device after sustaining a spinal cord injury himself, once commented that for more than 2,000 years, the wheelchair has been the only mobility solution offered to patients with paralysis below the waist, and now at MossRehab, the dream of walking again is becoming a reality for them. This was due to Dr. Esquanazi’s vision and passion for physical medicine and rehabilitation,” said ReWalk Robotics chief executive officer Larry Jasinski. “The rehabilitation robotics industry and the patients and clinicians who use these devices owe a debt of gratitude to Dr. Esquanazi and MossRehab. Quite simply, these devices wouldn’t be where they are today without his efforts.”

Demand for these devices, which are now being adopted in hospitals, rehab centers and homes, is growing. A new report released in August predicts the global rehabilitation robotics market will reach a valuation of $7.6 billion by 2026. A separate report estimated that by the same year, the global wearable exoskeleton market will reach $4.6 billion.

Pioneers like Esquenazi have moved the field forward, and thus know best where the technology might evolve to next. Here are a few developments we can expect to see in the future of rehabilitative robotics, according to Esquenazi:

Startups will step up to meet the demand for rehabilitative robotics

“Looking at the population, we expect that about one in six people will have one form or another of disability in their lives. One of my board members always says, ‘we are all temporarily able people because at one point or another we’ll all become disabled.’ And this is true, even if it’s for a short period of time, we all will go through that,” Esquenzai said. “The population as a whole is getting older. So, we need to look at alternatives for care delivery and robots will become a part of that strategy. That’s already happening in places like Japan and Korea where they are starting to use robots for day-to-day basic care delivery. There is a large potential for new opportunities, and I believe startups will begin paying more attention to it.”

“As more of medicine continues moving into the concept of medicine that is tailored for patients either based on conditions or genetics or other patient identifiers, we’re going to see more patients survive injuries. But they’re all still going to need rehabilitation,” Esquenazi explained. “Rehabilitation is about the independence of self-care, decision making and mobility. Those are the areas that we’re going to see rehabilitation experts using robotics and working in a very focused manner to ensure patients have those capabilities.”

Robotic technology will continue to improve and evolve

“I think we’re going to see further technological development,” Esquenazi said. “So we’re going to see smarter robots, smaller robots, robots that can go home with the patient, wheelchairs that will function like self-driving cars, and other innovations that will help patients regain independence as fast as possible in a home-like environment where people tend to be happier and healthier.”