Here’s why other local healthcare providers, like Penn and Thomas Jefferson, must do the same. 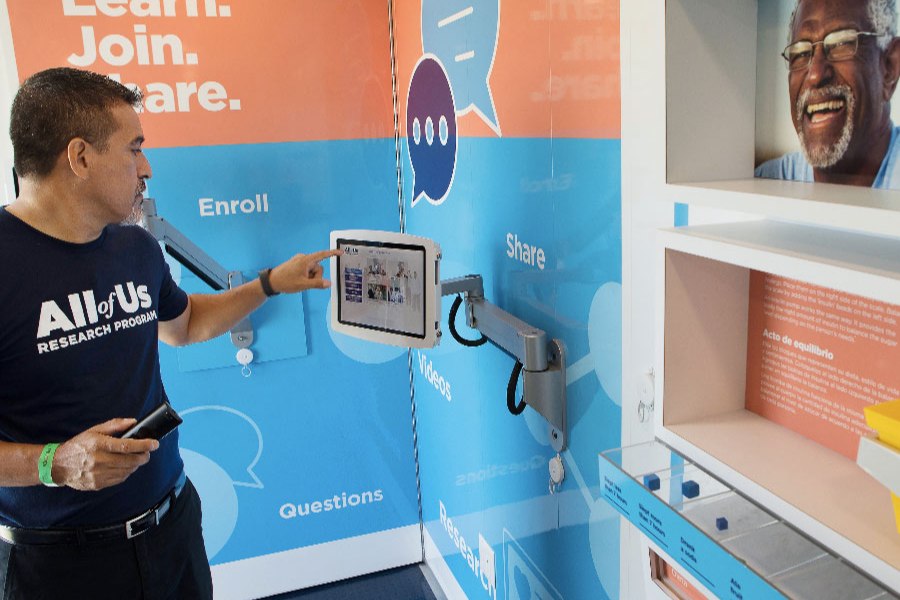 A man interacts with a video kiosk in the All of Us Journey, a traveling exhibit that is visiting communities across the country to raise awareness about the research program. / NIH

Temple University recently announced a partnership with the National Institutes of Health (NIH) and the University of Pittsburgh to open an enrollment site for the All of Us research program. The nationwide program, launched in 2018, aims to enroll more than one million diverse participants in research by 2023. To date, more than 220,000 adult participants have enrolled.

The NIH has funded more than 100 organizations throughout the U.S. to be partners in the program. Temple is the first health provider  in Philadelphia, and the second such organization in Pennsylvania to join the effort. Neither Thomas Jefferson University nor the University of Pennsylvania — the two largest health systems in the region — would comment about whether they have plans to join the initiative in the future, but they should.

Many minorities, in particular, members of the black community, tend to distrust medicine and science. It’s not a new issue, and the distrust is not without reason. For centuries, inequities in healthcare have disproportionately affected the black community. The infamous Syphilis study at Tuskegee, in which black men with syphilis were purposely denied treatment for the disease and studied without informed consent, is just one of many examples of the illegal victimization that has fueled the longstanding distrust.

Yet, for decades, the medical community’s approach to dealing with this issue has been one of obliviousness: if minorities don’t want to participate in research, don’t make them. Researchers may not have gone so far as to purposely exclude minorities from their studies but many have failed to implement any specific measures to foster trust and ensure minority inclusion. Exclusion from research hurts minority communities because, when you’re left out of research, you may also be left out of cures. This also makes it near impossible for minority communities to benefit from precision medicine — an emerging approach to disease treatment and prevention that considers differences in each individual’s environment, lifestyle and genetic makeup.

The All of Us program says it is partnering with organizations in diverse communities with hopes of rebuilding lost trust and raising awareness about the importance of participating in research.

“We’ve built a very large and diverse consortium, with around 2,000 people across the country, including people from many different minority communities and we actively work with partner organizations from across the country to gather community input and build trust. These organizations include black sororities and fraternities, Morehouse School of Medicine, Tuskegee University, the National Black Nurses Association, and the National Council of Negro Women, among many others,” an All of Us research program representative told NextHealth PHL.

“We know that many people have a distrust of the medical community and research, and we’re actively working at addressing their questions and concerns. We’re fully committed to being transparent with our participant partners about what’s involved when they sign up. We want everyone to know how they can participate, what their rights are, and how their data may be used,” the program said.

“For All of Us, it’s important that individuals know how they may benefit when they choose to participate in research. We’re offering an opportunity for underrepresented communities to have a seat at the table, from the start, in building a research program that may have a significant impact on the health of their communities and for future generations.”

People who join All of Us, make their information available for many research studies that could lead to new discoveries in the future. If successful, the program would be the largest, most diverse resource of its kind, enabling research to more precisely prevent and treat a variety of health conditions.

“Having a center in North Philadelphia is of particular importance because it will allow us to address an important health disparity — the limited understanding of the genetic basis of disease in minority populations,” Arthur Feldman, the Laura H. Carnell Professor of Medicine at the Lewis Katz School of Medicine at Temple University and All of Us lead investigator at Temple, said in a statement.

Here’s hoping other organizations in the region decide to follow Temple’s lead.