How Data Analytics Has Curbed the Prescription of Opioids in Philly

A new partnership between Jefferson Health and local software company Qlik may be one big step in reducing patients’ exposure to prescription painkillers. 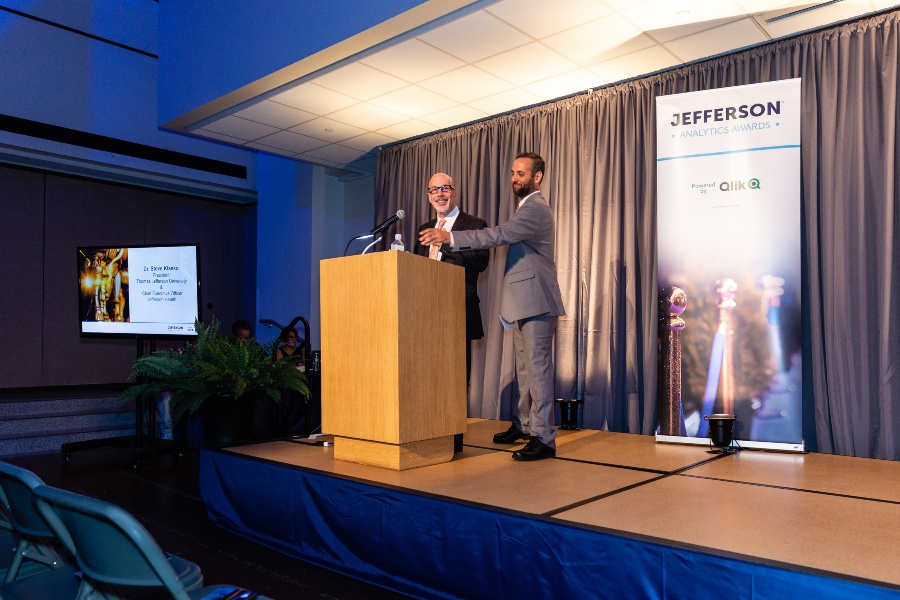 Though the opioid epidemic is not nearly as bad as it was in 2017 when the misuse of prescription painkillers resulted in more than 5,000 overdose deaths in Pennsylvania, it is still impacting many lives. In Philadelphia alone, more than 1,100 people died from opioid-related overdoses in 2018, down from more than 1,200 in 2017.

The slight decrease in overdose deaths can be partly attributed to changes in prescription guidelines aimed at limiting dosage and trimming the number of circumstances in which opioids could be prescribed. Following recommendations from Mayor Kenney’s Task Force to Combat the Opioid Epidemic in Philadelphia, health care providers across the city have updated care policies to ensure physicians prescribe highly addictive medications more judiciously.

As the second largest employer in Philadelphia, Jefferson Health has decided to go a step further by forming a partnership with Philadelphia-based business intelligence software company Qlik.

“When I first joined Jefferson four years ago, we realized that like many other health systems, we were underinvested in our analytics capabilities and we had an opportunity to rethink that,” Jefferson’s chief data scientist Mouneer Odeh said. “I like to refer to healthcare as being data rich but information and insight poor. There’s tons of data available through electronic record systems, but we still have a lot of difficulty getting that information out and seeing the impact from it.”

Together, Jefferson and Qlik have used key data insights to identify situations where they can prescribe fewer opioids, for shorter amounts of time. It’s a new approach that Bob Dawes, a partner at data science and analytics firm CompassRed says other healthcare companies should adopt.

“Data-driven remediation based on analysis to find outliers has much more impact than broad-brush efforts to train or inform huge populations,” Dawes said. “Tools like Qlik are very good at quickly aggregating millions of transactions to help find trends and define the norm. From there, outlier providers that overprescribe opioids can be found, as can patients that receive too many prescriptions. Capabilities like this are must-haves for healthcare companies today.”

Putting It into Practice

Jefferson celebrated the success of some of these efforts during its first Data Analytics Awards in July. The ceremony celebrated innovative efforts that use data analytics to improve the health system’s functions and outcomes for patients. One of the big winners was the Abington Enhanced Recovery After Surgery (ERAS) for Cesarean Section Project.

More than 4,500 women deliver at Abington Jefferson Health each year, 32 percent of whom deliver via cesarean. An estimated 1 in 300 women who have never used opioids become chronic users once they’re exposed to pain drugs after delivery by cesarean section. To address this issue, a team of more than 25 Jefferson employees aimed to reduce opioid exposure while still providing mothers with adequate pain relief by using an ERAS treatment plan and Qlik Sense data. Before the project was implemented, roughly 99 percent of women used some form of opioid during their hospital stay. The team was able to reduce opioid prescriptions after C-sections from 99 percent to nearly 25 percent.

Jefferson has also begun implementing similar methods in the emergency department, where patients often come in for issues that cause pain. While standard guidelines suggest no more than three days of prescription of opioids for patients being discharged from an emergency ward, Jefferson found the default setting in its electronic system was allowing options for physicians to write seven, 14 or 21-day prescriptions, resulting in many patients receiving prescriptions for longer terms than they needed. Working with Qlik, Jefferson changed the default setting in its system to limit prescription options to only three days. Within 30 days of implementing the change, Jefferson saw a 50 percent decrease in the over prescription of pain medications.

“This is another example of a different population where, again, you can target at a very specific level the risk for chronic use of opioids,” Odeh said, also noting that there are many more areas of the healthcare system where this type of use of data analytics can be applied to improve patient outcomes.

“There’s more work to be done in the ambulatory setting, as well as in other areas of the healthcare system, and we’re setting the stage for that,” he said. “Our message in the award ceremony was if we scale this impact out across hundreds of different projects, imagine the impact. We’re really excited about how analytics can be used to transform the patient experience as well.”