The Path to a Cure: Temple HIV Treatment Milestone Was 5 Years in the Making

The team still has several years of research ahead before their potential cure can be brought to patients. 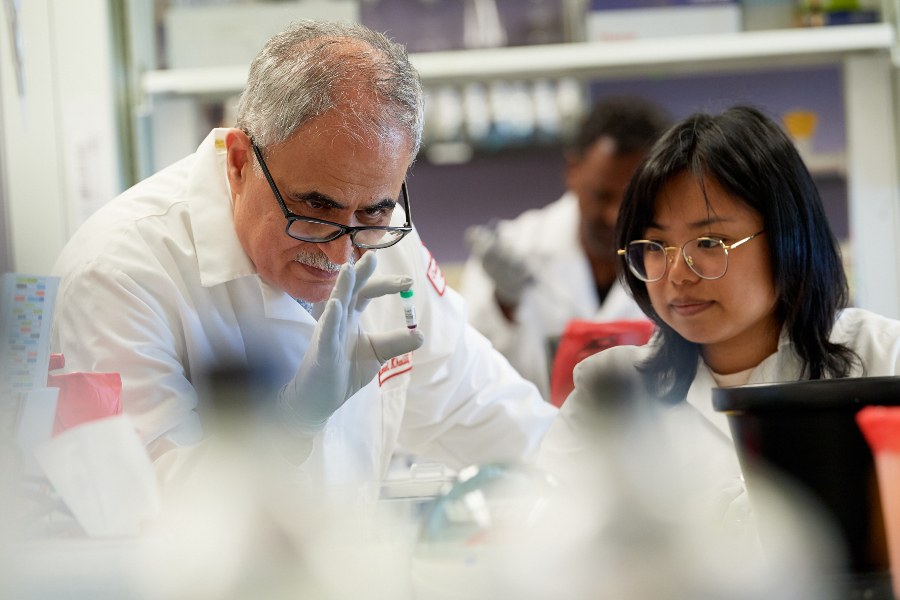 Temple University researchers are one step closer to eliminating HIV in humans. This month, a team of interdisciplinary researchers led by professor Kamel Khalili released the results of a study that showed the group had successfully removed HIV from the genomes of some mice.

Khalili’s team is currently working to apply the same method in a study of large animals, with the hope of gaining FDA approval to move forward with Phase I clinical trials in humans as early as next summer.

Here is a look at the extensive path Khalili’s team charted to reach this key milestone and what lies ahead:

November 2013 – Khalili introduced his concept of using gene editing for the elimination of HIV during a meeting with the National Institutes of Health (NIH).

July 2014 – Khalili and colleagues published a study in the Proceedings of the National Academy of Sciences (PNAS) journal detailing how they created molecular tools to delete HIV-1 proviral DNA from cell cultures. To complete the experiment, Khalili’s team grew T-cells using blood from HIV-infected humans and used a combination of a DNA-snipping enzyme called  nuclease and a targeting strand of RNA called guide RNA (gRNA) to hunt down the viral genome and delete the HIV-1 DNA.

March 2016 – Khalili’s team published the results of a new study in the Nature journal, Scientific Reports. In this study, researchers proved that their unique gene editing method not only eliminates the virus from cells but also protects cells against reinfection.

May 2016 – Using gene editing technology, Khalili’s team successfully removed a segment of HIV-1 DNA – the virus responsible for AIDS – from the genomes of living animals. The researchers published their study results in the journal Gene Therapy. This go around, the team used a recombinant adeno-associated viral (rAAV) vector delivery system to eliminate HIV-1 in living rats and mice, that had been genetically modified to mimic human cell structure. The results showed that the targeted segment of HIV-1 DNA had been successfully removed from the viral genome in every tissue, including the brain, heart, kidney, liver, lungs, spleen, and blood cells.

May 2017 – In new research published in the journal Molecular Therapy, Khalili’s team collaborated with researchers from the University of Pittsburg. Together, the researchers became the first to demonstrate that HIV-1 replication can be completely shut down and the virus eliminated from infected cells in animals using CRISPR/Cas9.

July 2019 – In another collaborative effort, Khalili’s team and researchers from the University of Nebraska Medical Center (UNMC) released the results of a study in the journal Nature Communications that showed the scientists had successfully eliminated HIV-1 in 9 of the 23 mice studied. This time, the researchers used CRISPR-based gene editing technology combined with long-acting slow-effective release antiviral therapy (LASER ART), a new antiretroviral treatment that was co-developed by Howard Gendelman, director of the Center for Neurodegenerative Diseases and Benson Edagwa, assistant professor of pharmacology at the University of Nebraska Medical Center (UNMC).

“It was important to bring in people from different disciplines to assist at different points in the project,” Khalili said.

By October or November 2019, Khalili expects his team will publish the results of a study that is currently underway. This study is testing the researchers’ latest iteration of the treatment on large animals, including non-human primates.

Khalili says his team is also preparing for an Investigational New Drug (IND) meeting with the FDA that he expects will occur by the end of this year. If all goes well, the team could receive FDA approval to move forward with Phase I clinical trials by next summer.

Three phases of clinical trials is the norm and can take anywhere from three to seven years or more to complete. However, if the FDA decides there is a critical need for the treatment, it could be fast-tracked to market after only two phases of trials. Khalili, however, is more concerned with proving the safety of the treatment rather than speeding it to market.

“I’m not sure if this will be fast-tracked through the FDA to get to market because when it comes to clinical trials, we just don’t know what the outcomes will be,” he said. “I think it is possible, but our goal is efficacy and safety. So, I think Phase III will need to be done because each clinical trial leads to improvement of the application.”

More than 36 million people are living with HIV. There is currently no cure or vaccine for the disease.