Where to Eat (and Shop) in the Italian Market: The Ultimate Guide

The market on 9th Street (one of the oldest and largest open-air markets in the country) does it all — butcher shops, cheese shops, Mexican taquerias, souvlaki joints and more. 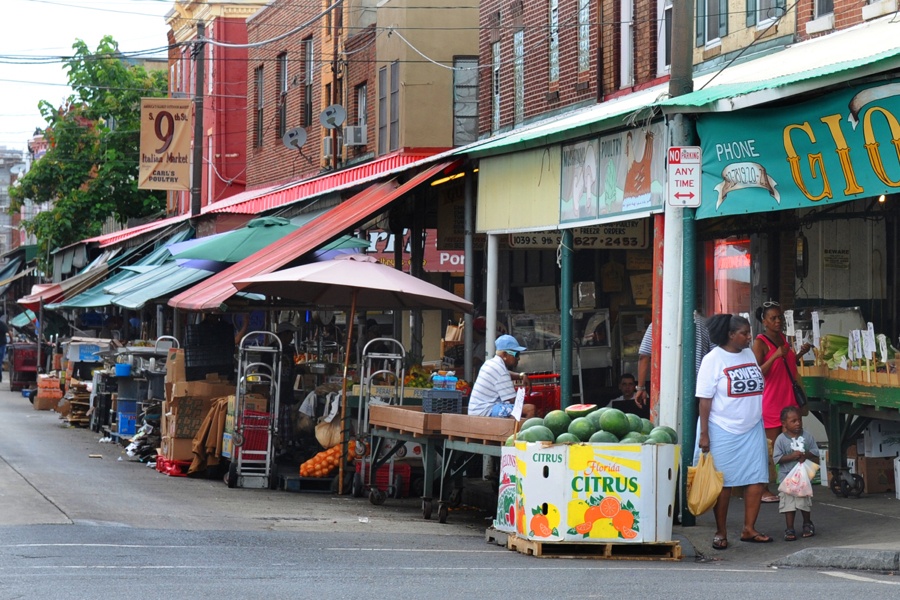 Unless you go there all the time, Philly’s Italian Market is probably not what you’re thinking it is. Sure, you can still pick up some fresh produce here during the day and a plate of spaghetti at Villa de Roma. But the neighborhood has been changing for years (maybe one day its name will change, too). Lately, it is one of Philly’s most eclectic foodie hubs — a place where the tacos are just as much of a draw as the pastas, where one of the city’s best new Thai restaurants operates next door to a fifth-generation Italian restaurant.

And while yes, there’s always been some debate over what boundaries to put on the “Italian Market neighborhood” in Philly, for this guide we’re limiting it solely to 9th Street, between Fitzwater and Wharton Streets. There’s enough there to keep anyone occupied.

So let’s take a look, shall we? Because if you’re looking for a guide to the best of Philly’s Italian Market, you’ve come to the right place. 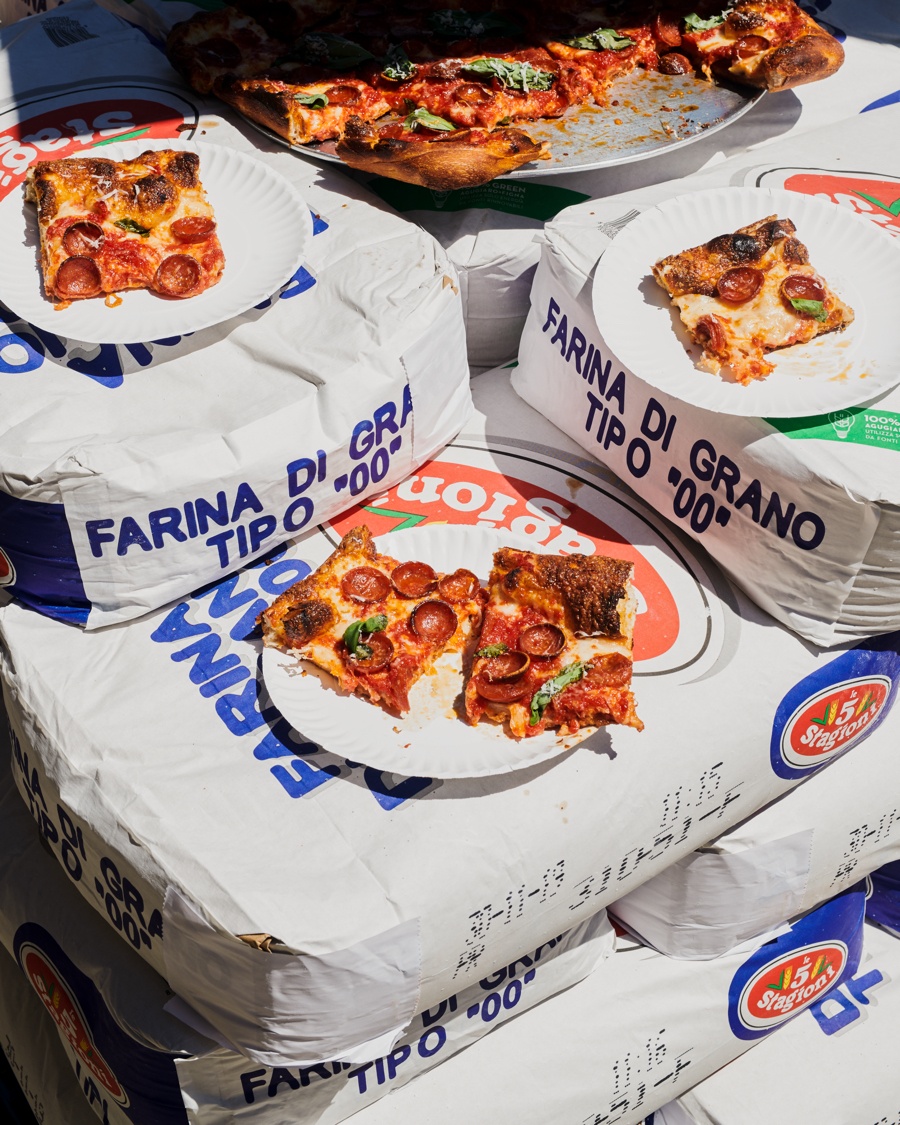 Where To Eat in the Italian Market

Angelo’s Pizzeria
It’s the best pizza in Philly right now. Yeah, I said it. Fight me. Angelo’s also represents the northern border of what, for the sake of this list, I’m considering the Italian Market. Which leads us to… 736 South 9th Street

Al Zaytouna
Hummus, falafel, chicken kabobs. Not what you were thinking when you pictured the Italian Market of the past? Good. They’ve also got Turkish coffee here if you’re looking for a little jet fuel to start your day — or kick off your night. 906 Christian Street

Bar One
A friendly, easy-going corner bar that does house-made pasta and, I kid you not, cheesesteak-style mussels. 767 South 9th Street

Anastasi Seafood
It was a toss-up which category to put this in. Sure, you can buy crabs and fish at the nearly century-old seafood market, but Anastasi also has a full bar and a killer seafood menu that’s got everything from fried smelts to whole lobsters. Really, it was the bars that made the difference — both raw and cocktail. 1101 South 9th Street

Blue Corn
Back in 2015, we named this Mexico City-style joint the best Mexican restaurant in Philly for the zucchini flower quesadillas and the margaritas. Really, not much has changed since then — except that Blue Corn has gotten a bunch more competition in the neighborhood. 940 South 9th Street

Lorenzo’s Pizza
The family has been serving pizza here for more than 80 years. At this point, I figure they gotta know what they’re doing. 900 Christian Street

Ralph’s Italian Restaurant
Hey, were you impressed by the 80-some years that last place has been around? Because Ralph’s has been serving red gravy Italian in the Italian Market for almost 120 years. That’s some serious history, which is why Ralph’s stands today as a kind of edible museum exhibit on Italian-American cuisine and how Philly has eaten for the past century. 760 South 9th Street

Mole Poblano
Show up early, you can get huevos con mole for breakfast — eggs and refried beans in mole sauce with some tortillas to scoop it all up with. 1144 South 9th Street

Isgro Pastries
It’s a little bit outside the boundaries we’ve set for this list, but I’m willing to make an exception for one of the most famous Italian bakeries in the city. This is the place that South Philly goes to for their Easter bread, their cannoli, their wedding cakes and cookies and pretty much anything else. During Christmas, they have to set up tents to cover the lines of people waiting to get in. All of which is to say that people like Isgro’s, and it has been part of Philly’s food community long enough that it deserves a place of honor on any neighborhood list. 1009 Christian Street

🌞 It’s a beautiful day in the neighborhood! We are open with delicous tacos and consome, come eat by yourself or bring the whole family. 1140 s. 9th st

South Philly Barbacoa
Pork and lamb barbacoa tacos before noon on a Sunday? You’d better believe it. Three days a week, this is the place in Philly to score delicious tacos (and equally delicious horchata), and it sports the lines to prove it. Go early. Bring cash. And prepare for one of those rare moments where a place actually lives up to all the hype surrounding it. 1140 South 9th Street

Los Taquitos de Puebla III
An offshoot of the original Los Taquitos (operated by one of the two original partners), this Mexican spot handles all the basics admirably and does orders of super-crispy chicken taquitos with guacamole that remain a neighborhood favorite. 1201 South 9th Street

12 Steps Down
Because every neighborhood should have an underground bar this cool and this laid back. The beer-battered chicken fingers are awesome, by the way. And if you think you’re too fancy for chicken fingers on a Friday night then just go drink somewhere else. 831 Christian Street

116 Jamaican Cuisine
A simple, straightforward menu of jerk and stewed chicken, stir-fry shrimp, some vegetarian options and Jamaican black cake are enough to make this place a relatively unsung favorite of some of the restaurant crews in the area. 1165 South 9th Street

Taqueria La Veracruzana
This is where you go to get chilaquiles for breakfast in the Italian Market, or Cubana tortas if you overslept. 908 Washington Avenue

Anthony’s Italian Coffee House
Homey and comforting, this is a place to go and relax when you’ve got a little time to yourself. Have an espresso and some biscotti, or splurge on any of the pastries, have some gelato when its hot out, some cannoli any time. 903 South 9th Street

Sabrina’s Cafe
Fried chicken and waffles, challah french toast, pancakes, quinoa. Sure, Sabrina’s does all that. But go there in the morning and order “The Philly” instead. You can thank me later. 910 Christian Street 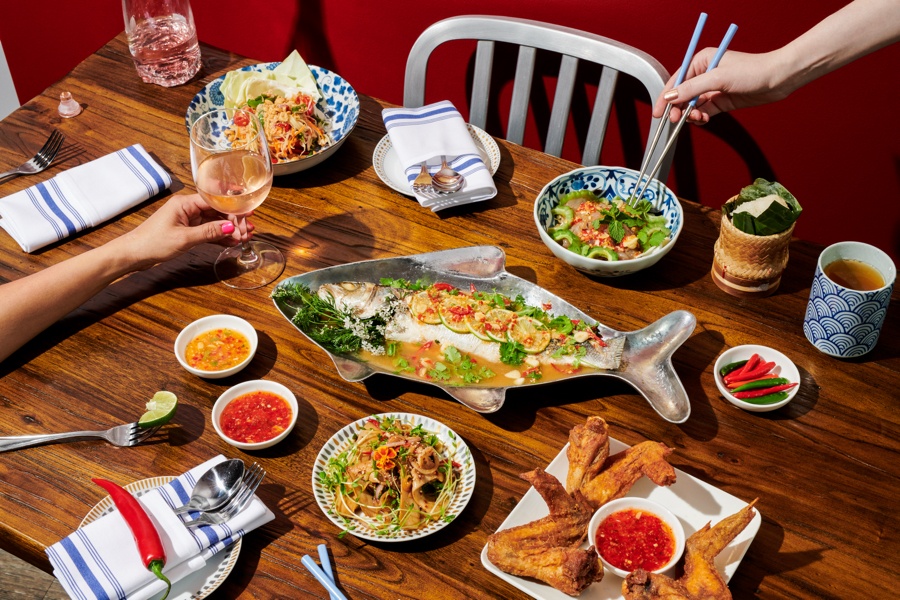 Kalaya Thai Kitchen
Owners Chutatip “Nok” Suntaranon and My-Le Vuong use this space to serve Philly the authentic flavors of Thailand — brilliant curry-spiked, lemongrass-scented, chile-fired memories of home. But these aren’t super-traditional Thai recipes. Rather, Kalaya offers a modern version of Thai cuisine that’s a perfect addition to the global community of flavors that exists in the surrounding blocks. Plus, the toong tang beggar’s purses (when they’re available) filled with curry and potatoes might be some of the best single bites that exist anywhere on 9th Avenue. 764 South 9th Street

Prima Pizza Taqueria Mexicana
While everyone else waits in line at South Philly Barbacoa, give this totally-not-a-pizza-place a try. They’re serving some of the best Mexican food in the area, doing it cheaply, and no matter how busy they are, there’s a whole lot of seating available almost all the time. Kick-ass chicken tacos with green chili come three for $9 and are heavy, so don’t worry about not having enough to eat. 1104 South 9th Street

Garage
Kind of like a never-ending pop-up experiment, only with lots of canned beer, whiskey and picklebacks. The cart in the middle of the room is staffed by a constantly-rotating list of some of the biggest names in the Philly food scene, and a few geniuses you may never have heard of. 1231 East Passyunk Avenue

Pat’s and Geno’s
We’re using these guys as the southern boundary of this list. And yeah, I get it. These are two different places. But then again, are they really? I mean, they essentially exist (have existed, will continue to exist) as the defining restaurants for people who know nothing about Philly — two competing cheesesteak operations, playing out their assigned roles down in Cheesesteak Vegas. They are the binary star around which our city revolves, smelling of onions and Axe body spray, dripping with neon. Pat’s and Geno’s serve cheesesteaks. They serve a lot of cheesesteaks, and they do it at all hours of the day and night. If you’re looking for a show, check ’em out. Everyone has to do it once. 9th and Passyunk

Where To Shop in the Italian Market

Rent out our original 9th Street Italian Market store for the evening with your friends and eat SO MUCH CHEESE! Tell us ahead of time if you’ll BYO and we’ll create pairings that work with your choice of libation. Cheese away! Call us at 215-922-2876 or e-mail us at 9thstreet [at] dibruno [dot] com to book. #DBAfterHours

Di Bruno Bros.
The original Di Bruno’s shop. The place where it all began. It is small. It is cramped. And yet, it still has its own cheese cave, charcuterie counter, antipasti bar and pretty much anything you could possibly need to put together an Italian feast. 930 South 9th Street

Tortilleria San Roman
Fresh tortillas, made every single day. And that’s awesome enough, but San Roman also makes their own salsa, pico and guacamole on the weekends. 951 South 9th Street

Talluto’s
Fresh, handmade pastas and sauces are the big draw here, but they also make their own burrata every day, and it’s worth checking out. 944 South 9th Street

Los Amigo’s Food Market
You can buy pretty much anything you need at this small Mexican grocery. But while you’re there, do not miss the tamales and tacos they sell over he counter. Near as I’ve been able to tell, the tamales sell out pretty quickly, but the kitchen keeps knocking out fresh batches all day long. 927 South 9th Street

Darigo’s Fish Market
No-frills, no-bullshit fish market with a large selection of sea critters all displayed on ice, in tubs, and right there for you to poke at. The staff knows their business and will help if you ask, but just remember that it’s cash-only (though there is an ATM available if you forget). 1015 South 9th Street

Las Lomas Panaderia
A stuffed, crowded, overpacked grocery store right at the tail end of the Italian Market, yes. But at the back is a full-service bakery that does some of the best Mexican pastries and baked goods in town at incredibly cheap prices. 1167 South 9th Street

Giordano’s Produce
Another Italian Market stalwart, Giordano’s started slinging fruits and veggies from a small stand in the 1920’s and eventually grew to take over most of a block. They sell from the curb, under their big sign, and have even more inside. 1043 South 9th Street

Cannuli’s Quality Meats
If you’re looking for an entire pig, this is the place to go. They also do smaller cuts, but when whole pigs are available, you should really just buy the whole pig. Not to eat all by yourself, of course. That would be ridiculous. I mean…wouldn’t it? 937 South 9th Street

Cappuccio’s Meats
Homemade Italian sausage, dry-aged steaks and beef that comes from cows raised on Herr’s potato chips. You simply can NOT get any more Philly-goddamn-local than that. 1019 South 9th Street

El Pueblo Meat Market
Basically a neighborhood bodega — small and cramped and selling all the basics and staples. But they also sell produce out by the curb, inexpensive flowers (something to keep in mind), and have a small butchering operation in the back that supplies meat for the neighbors. The staff is friendly, and they take credit cards–which is nice. 1141 South 9th Street\

Charlie’s Fruit & Produce
A series of curbside stands offering all the fruits and vegetables you could possibly need. 9th and Carpenter

Taffet’s Bakery
A totally gluten-free bakery in the Italian Market? Yeah, that’s how you know that things really are changing. Getting better, maybe. But changing for sure. Oh, and the baked goods here? People love ’em. Everything from bagels to pizza crusts, all made by a chef-turned-baker and his crew. 1024 South 9th Street