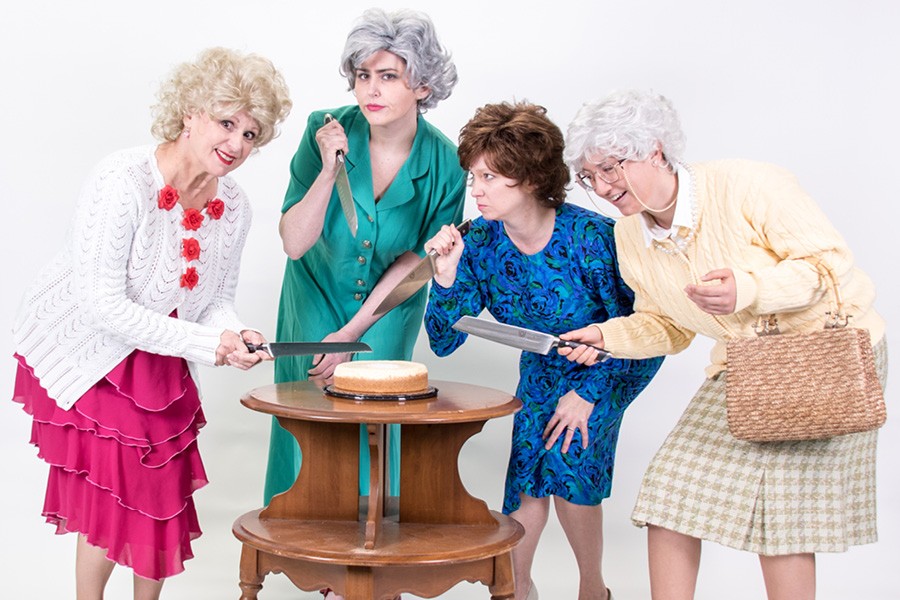 We’ve got some big news this week in the Round-Up. The James Beard Foundation announced the semi-finalists for the return of their chef and restaurant awards, and Philly is well-represented. We’re losing a Queen Village restaurant that has been the focus of controversy since 2020. But on the other hand, it looks like we’re going to be getting some new pizza from one of the biggest names in the local scene a little sooner than we anticipated.

First, though, we have to talk about The Golden Girls … 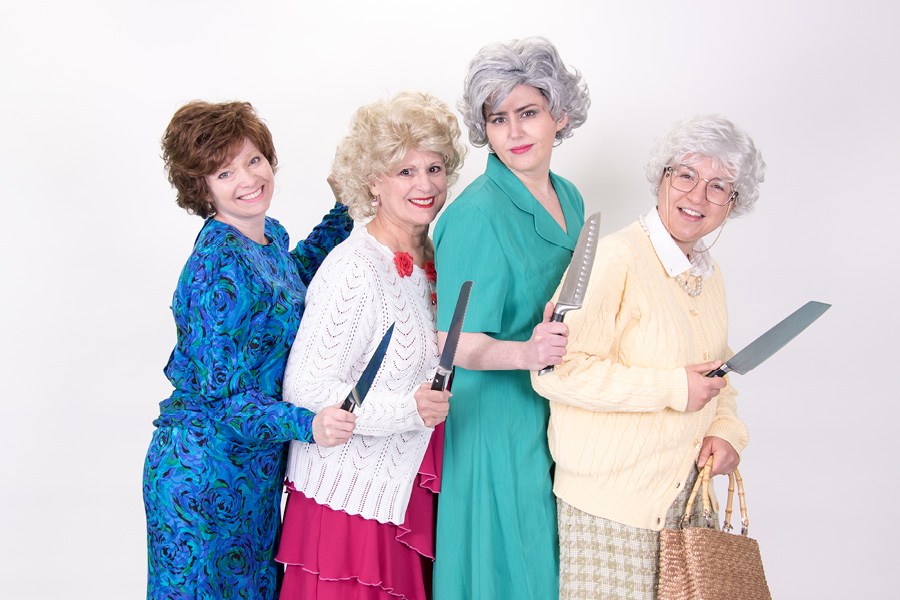 Photo courtesy Without a Cue Productions

Blanche, Rose, Dorothy and Sophia are coming to Philly. Specifically, to Craft Hall, where they will be trying to solve a murder.

Those are two sentences I never thought I’d write.

And yet, here we are. The Curse of Jessica Fletcher, a Golden Girls murder mystery, will make its Philly debut on March 5th at the ever-inventive Craft Hall (most recently in this column for running its own Puppy Bowl just before the big game a couple weeks ago). It is a full-on, immersive bit of comedic dinner theater featuring the four friends from Miami, being staged by Bucks County’s Without A Cue Productions. There’ll be themed food and cocktails, “whodunnit vibes,” senior-citizen sex humor, nighttime cheesecake, mystery solving and, of course, murder. So what’s not to love? It’s also launching during Women’s History Month, being staged by a female-owned production company, features four female leads AND is donating a portion of the proceeds from ticket sales to the Philadelphia Animal Welfare Society in honor of the late, great Betty White.

Look, dinner theater is not my thing at all. I get uncomfortable when the server takes too long telling me the specials. But I understand that some people might feel differently. I also understand just how powerful nostalgia — particularly ’80s nostalgia — can be (he says while sitting on his couch, typing away in a vintage Star Blazers T-shirt). So believe me when I tell you that this show is going to be a big deal. FCM Hospitality (which owns Craft Hall) knows how to throw a party. The Girls still swing a big weight among a certain Reagan-era demographic and devotees of classic sitcoms. And some people just really like the communal vibe of interactive theater and the idea of taking selfies with imaginary Miami retirees being played by Philly-area actors trying really hard to suppress their regional accents.

The show will run from 6 to 9 p.m. on select Fridays, Saturdays and Sundays throughout March. Tickets are $64 per person and include the show, food (including Italian antipasto from Sophia and Dorothy, Southern barbecue chicken salad from Blanche and dessert from Rose), and three themed cocktails. If you’re down, you can get your tickets here.

I’ll be sitting this one out, but y’all have a good time and tell me how it goes, okay?

After a long pandemic-and-ethics-related hiatus, the James Beard Foundation is back in the awards game. Last week, they released the names of their 2022 restaurants and chef awards finalists, and Philly did pretty well, notching 11 slots on the big list.

So who got a mention? Well, let me tell you:

If you want to check out the full list (it is loooong), you can do so here. Winners will be announced on Monday, June 13th in Chicago.

End of the Line for Former Hungry Pigeon

Fitz and Starts is the bakery and café run by Pat O’Malley and his crew in the space that used to be Hungry Pigeon. O’Malley actually used to be a partner in Hungry Pigeon with Scott Schroeder before Schroeder left almost two years ago (though “left” is kinda the polite way of putting it) after being called out by staff for his “racist and domineering social presence” following some social-media dipshittery during the racial-justice protests in 2020, and a bullying culture in the workplace in general. Schroeder was gone within days, and O’Malley rebranded the space as Fitz and Starts.

Fitz hung on for nearly two years as a café and bakery paying fair wages and connecting with the community. But it wasn’t enough. Last week, O’Malley announced on Instagram that things were coming to an end at Fitz, thanked everyone, and encouraged the neighbors to stop in one last time.

The last day of service will be March 20. 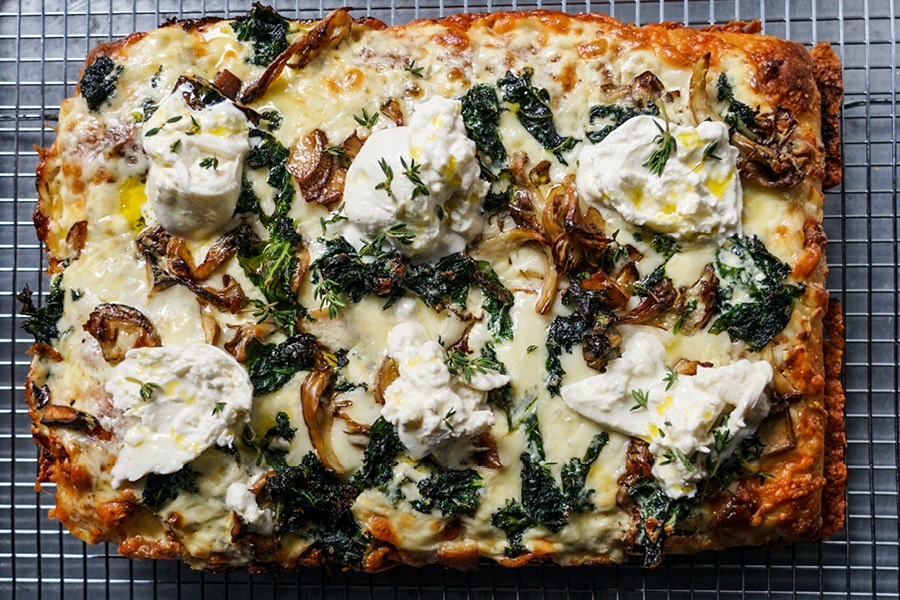 But Wait, There’s Good News, Too.

We may be losing Fitz, but we also had kind of a surprise opening last week in Midtown Village.

Good Luck Pizza Co. — Marcie Turney and Val Safran’s new pizza concept that has been operating in pop-up mode for the past few months — is now up-and-running in its new permanent home at 105 South 13th Street. You already know the spot. It’s where Turney and Safran’s Spanish wine bar, Jamonera, used to live before closing during one of the darker stretches of the pandemic.

The new joint looks similar. It seats 30 indoors with 12 seats at the long bar and will add another 20 outside when the weather warms up. There’s indie beers on tap, craft cocktails at the bar, a wine program curated to pair with pizza (nice), and the kitchen will be doing Calabrian chili wings, meatballs, Sicilian roasted carrots with golden raisins, plates of ricotta crespelle and chicken parm, and, of course, pizzas. Good Luck is doing a thick-crust, high-hydration/long-fermentation process, making for a light crust crispy at the edges. And they’re topping them with interesting stuff. They’ve got a potato pizza (which I love), a hot grandma pie (soppressata and chili-spiked honey), one with Brussels sprouts and burrata, another with sausage and peppers. Honestly, they all look good, and they’re all available right now. Well, on Wednesday, I guess. But still, you could be making a reservation right now, so what are you waiting for?

Good Luck Pizza is open Wednesday to Sunday, 5 to 10 p.m., with indoor service, takeout and delivery. Come spring, they’ll be adding tables and additional services. I’ll update you when I know more.

And now, it’s time for some leftovers.

Art in the Age is reopening their bar and tasting room. Starting now, those of you looking for tasting flights, experimental cocktails or just something different from the thousand sazeracs that Philly seems determined to serve everyone whenever they leave the house, this is the place. The winter menu that they’re running with now has a chai toddy on the board that sounds like it’ll cure any head cold and a mulled-wine boulevardier that just looks massive — rye, vermouth, campari and red wine all braced with spiced tea, and fig and cinnamon bitters. There’s also a Mai Tai Tuesday deal with $10 mai tais all day at the bar.

So, you know, if you need to find me on a Tuesday …

Meanwhile, Forsythia is launching a Frenchy-French weekend brunch service with caviar and crepes, waffles and ham-and-raclette sandwiches. It debuts this Saturday and Sunday. You can make your reservations here.

Not to be outdone by the madcaps at Art in the Age, New Liberty Distillery is trying to get some action going with a series of Speakeasy Jazz Nights. On the last Friday of every month, they’re doing live jazz, whiskey flights, prohibition cocktails and … empanadas?

Okay, so that’s a little bit anachronistic, but who cares! El Secreto Snack Philly will be on hand with the Argentinian food, and New Liberty will handle the booze. It’s free to get in, but you will need a reservation. Make yours here.

Missing the Hawaiian food that Kiki Aranita and her staff used to do at Poi Dog? I am. But here’s some good news: She’s going to be the chef-in-residence at the Philadelphia Museum of Art on March 4th, 5th and 6th. So if you’re after some Kalua pig nachos and poke bowls, show up at the museum’s café and check it out between 11:30 a.m. and 2:30 p.m.

And finally this week, Rex at the Royal is launching a Sunday Industry Night deal for everyone who’s still trying to make it in the restaurant game.

Every Sunday, from 8 p.m. to midnight, you can score Shiner Bock and Old Forester Citywides for $7, tea-infused vodka with lemon and salted honey for $10, New Trail Hazy IPAs for $5 and a bunch of bartender’s-choice sips and shots.

For everyone else, they’re also launching a burger, beer and a shot deal, which gets you the house’s excellent burger, a pint of Neshaminy Creek Sojourner lager and a shot of bourbon, all for $24, every Monday from  5 to 10 p.m.

And that’s it for this week, folks. See y’all back here next Monday.