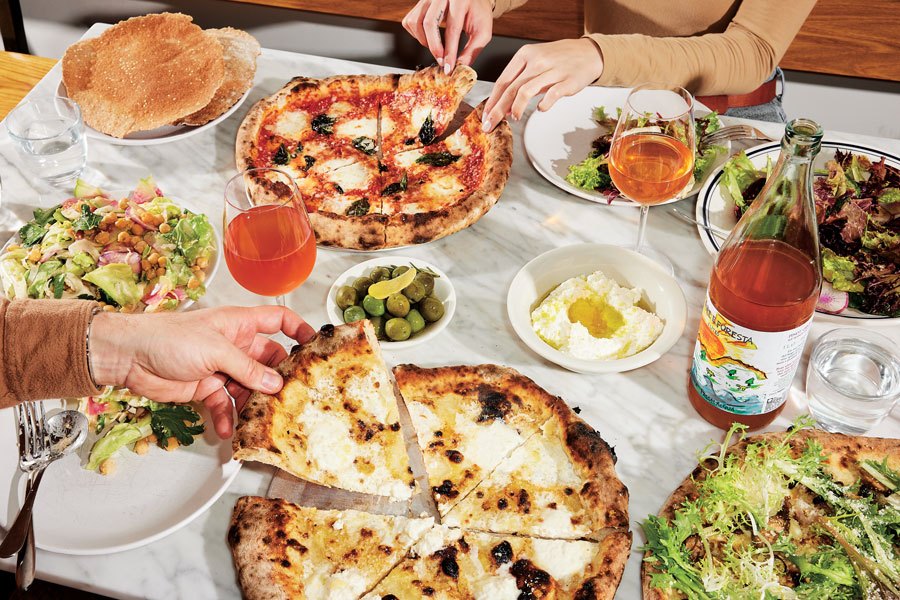 Pizza and wine at Eeva in Kensington. / Photograph by Michael Persico

We’re not back to normal yet, but we thought it was time to take a stab at the list again—but this year, it’s a little different. We broke the Top 50 into five categories, each showing off a different facet of the region’s most vibrant restaurants. Below, 10 restaurants and purveyors that used the pandemic as a springboard to new heights.

Eeva is, depending on how you look at it (or utilize it), a retail bakery and bottle shop, a takeout pizza joint, a delivery operation, a full-blown sit-down-and-eat restaurant. It’s a place that is whatever it needs to be — changing day to day and customer by customer. To sit down and eat is to be folded into the easy embrace of casual, comforting service, and the menu — bowls of marinated olives, natural wines, fresh bread with house ricotta, hot salami pies drizzled with local honey or topped with fennel cream and roasted hazelnuts — is deceptively simple yet deeply fulfilling no matter how you choose to approach it.

It was cool enough that Mat and Amy Falco took an old auto shop and turned it into a small-batch coffee roaster and boutique market. But when COVID pretty much killed the coffee-shop culture of leisurely hanging out over a latte, Herman’s responded by throwing open the roll-up doors, setting out the patio furniture, and turning the place into a hub for food trucks and pop-ups. Birria tacos from Burrito Feliz, Filipino rice bowls from Tabachoy, gourmet pop tarts, benefit dinners, brunch — Herman’s­ hosts ’em all. And all you have to do is show up.

If you’re of a certain age and living in Philly, you probably remember when High Street opened on Market Street. Specifically, you remember the Forager breakfast sandwich and how, with its messy-delicious mix of scrambled eggs and pickled mushrooms hanging over a house-baked roll, it changed what we thought about restaurant breakfasts. When landlords jacked up the rent on Ellen Yin and Eli Kulp’s landmark restaurant and bakery, the duo found a new home. The Forager is still on the menu, but so is a dizzying array of baked goods: kabocha squash bread, lemon squares, muffins, cookies and biscotti, sandwiches on fresh-baked bread, soups, salads, pizza and much more.

The reincarnation of Irwin’s (which closed during the shutdown) is basically a bigger, fancier playground for Michael Vincent Ferreri, former chef of Res Ipsa Cafe (may it rest in peace), with a lot of the same front- and back-of-house staff and a menu that does highly stylized Sicilian food — perfect whole fish, rustic handmade pastas, cheffy seasonal caponatas. Only now, the whole package comes with Irwin’s eighth-floor views of South Philly, its cool lounge vibe inside, and a bar stocked with pretty Italian wines by the bottle.

It’s a good thing that when Michael and Jeniphur Pasquarello opened their Fishtown restaurant in 2014, they gave it the fairly generic name Kensington Quarters. A place called that could be anything—and in its seven years on Frankford Avenue, it has been many things: a restaurant, a butcher shop, a classroom, a wine-centric restaurant, a Southern-ish restaurant. At the moment, in its newest post-shutdown incarnation, this is a straight-up coastal restaurant, serving bluefin tuna in brown butter, stuffed clams, and skate wing with seafood kimchi. Who knows what KQ will become next? For right now, this pandemic identity shift has finally given Fishtown a proper fish house — something the neighborhood (and the city) has needed for a long time.

Little Fish is the place where you send visitors to give them a perfectly Philly BYOB experience. Over the past year, the tiny seafood-centric spot has changed its menu from à la carte to tasting, and now tasting with an à la carte option. Whatever the format, Little Fish shows off the best of our restaurant scene with an ever-changing menu, scribbled on a chalkboard, of sashimi, scallop toast, and seemingly every other fish, prepared in infinite delicious ways.

The century-old members-only club is thriving thanks to the combo of Jason Cichonski, beverage director Melissa Pellegrino, and new chef and operating partner Eddie Konrad. Formerly of Laurel (and Top Chef), Konrad shines with dishes like bluefin tuna tartare on a bed of squak, i.e., charred honeynut squash mashed with cilantro, lime and pumpkin oil. Pellegrino’s cocktails are also stellar, including a new seasonal lineup that includes the Keystone State Martinez, a mix of Bluecoat gin, Ploughman cider, Plenum vermouth, and bitters she makes with foraged spice bush and sumac. 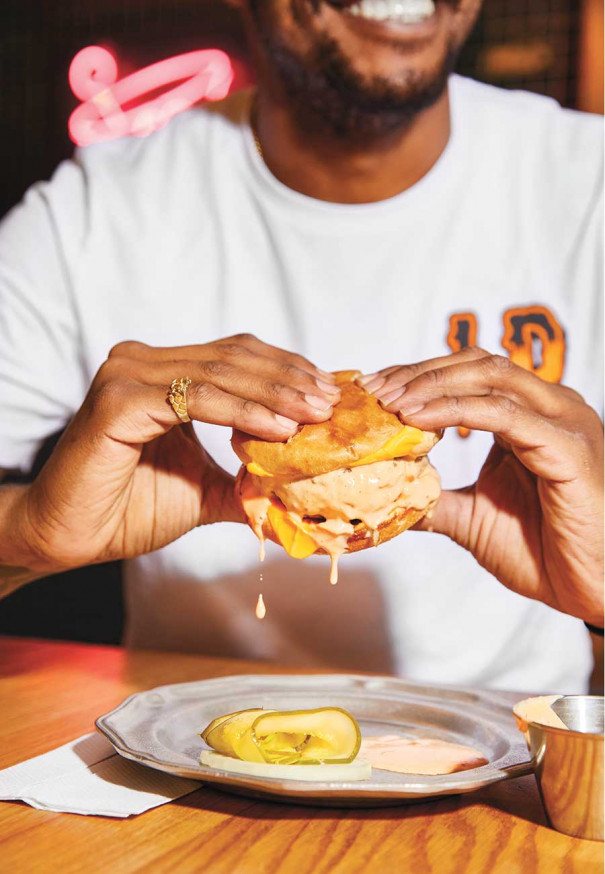 The cheeseburger at Middle Child Clubhouse in Fishtown. / Photograph by Michael Persico

Four years ago, with a head full of steam and ideas, Matt Cahn opened a sandwich joint called Middle Child in an unassuming storefront in Washington Square West. Who knew that in four years, it would become indispensable? That its fluffy breakfast sandwiches and Italian hoagies would be name-dropped in the same breath as Zahav’s hummus and Vetri’s pastas in conversations about destination dining? For Middle Child Clubhouse — essentially a bigger, more learned, more equipped version of the original — Cahn decided to take what he’d already built and expand its ethos under the El in Fishtown. He hired Adam Sosnowik to run the kitchen, which, yes, still does breakfast sandwiches and hoagies during the day. But at night? It’s latke bites covered in caviar, stupid-good cheeseburgers, and giant plates of chicken Milanese. It’s salty margs and cool wine. In its heart of hearts, it’s still the same playful, delicious Middle Child. Just grown up. A little.

Rex at the Royal

The historic Royal Theatre got a long-awaited revamp over the past few years and finally, blessedly, opened in early November as Rex at the Royal. And if the gorgeous dining room—restored to its original glory with a glistening marble bar, plush banquettes, and dramatic golden chandeliers—isn’t enough to bring you in, the menu of she-crab soup, shrimp and Marsh Hen Mill speckled grits, and other Low Country favorites surely will.

With its warm wooden bar, twinkly outdoor patio, crisp-skinned roasted chicken and flowing rum punches, Southwark was already pretty much perfect before its mid-pandemic renovation. Nowadays, though, you can also book a chef’s table inside the kitchen for splashing out on dinner (at $300 a head), or go for #Winewark Mondays, when you can get a glass from some of the swankier bottles, or Breeze by BBQ Tuesdays, at which burgers are served alfresco even when chilly temps require bundling up.