The most fabulous woman in Philadelphia's food scene is sick of people thinking Thai food should be cheap. 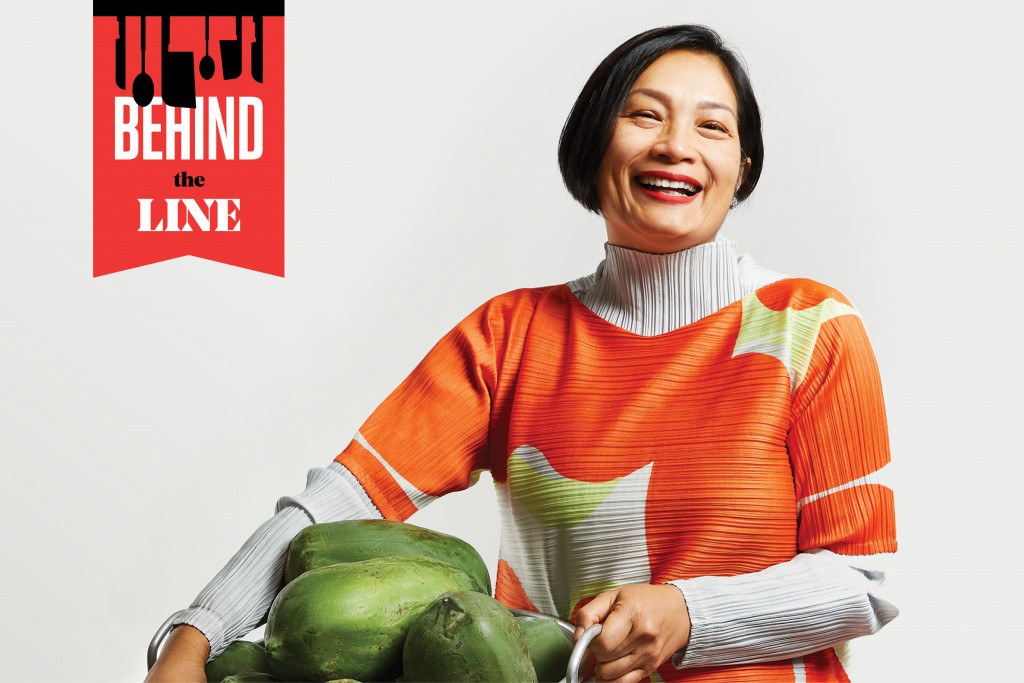 If you’ve been to Kalaya Thai Kitchen, you’ve probably met Chutatip Suntaranon, better known as Nok. She’s always there, making curry in the kitchen by day and chatting up the diners by night, always wearing something fabulous, always telling people what to order. When the 37-seat BYO opened last year, it quickly became one of our favorite restaurants in the city, earning a Best of Philly for it’s uncompromising commitment to Thai flavors that refuse to cater to the mainstream American palate. Kalaya is a deeply personal restaurant, reflective of Nok’s life, which spans two continents and multiple careers. We sat down with the incredibly talented, impeccably dressed chef to discuss cooking, her style, spoiling her dog, and why her food is definitely not too spicy.

My full name is … Chutatip Suntaranon but everyone calls me Nok.

I grew up in … Trang, Thailand.

The restaurant’s name is pronounced … Kah-lay-YAH.

Before opening Kalaya … I was a flight attendant for Thai Airways, and I owned a jewelry store and an Italian restaurant in Thailand for seven years. We sold high-end stuff, like lobster from Tasmania, wagyu, ravioli with foie gras and lobster. I worked every day for seven years, and then I thought I was retired.

I came to Philly when … I met my husband while I was working as a flight attendant and I visited him in Philadelphia. I thought ‘What is this city? How am I gonna live here?’ But then I totally fell in love with Philadelphia the first year I lived here.

I used to give away food to my neighbors because … I love to cook, but when I cook I don’t really feel like eating what I make. When I moved to Philly, I had been working three jobs for a long time, so I decided to take some time to not do anything. I would go to the store and buy ingredients and then just cook all day – I had nothing else to do. I would just grab strangers off the street and feed them. When Scott [Schroeder] and Pat [O’Malley] opened Hungry Pigeon, I thought they were cool and I wanted to be cool like them, so I started bringing them food. It was how I made friends. That and my dog, because he’s so cute.

My dog’s name is … Tong, which means gold in Thai. He eats organic chicken liver for breakfast and gets groomed every night and hangs out with his nannies every day. He has a very good life. He’s a Pomeranian. Tong is a brat.

I signed a check on the spot when I saw this space because … I was cooking for all these people in my neighborhood and then people started asking me to cater and it got really out of hand. I once catered a dessert party with a croquembouche for 130 out of my own kitchen. It came to the point where I told my husband, either I stop or I look for a kitchen in the middle of nowhere with affordable rent, so I can still do it but also have my life, and go on vacation. So I started looking for a space, and one day I came to see this place, it was like this space chose me.

I named the restaurant “Kalaya” after my mother because … She is everything, for me. She worked very hard to put me and my brothers where we are, she sacrificed everything for us. When I told her I was naming the restaurant after her she said, ‘Will people like it?’ But when I told her we won the Best of Philly, she was so proud.

I will never pay people under minimum wage because … people who make food for others should never be hungry. When we opened, I struggled to keep dishwashers, and I realized it was because they weren’t being paid enough. So we started paying them more, and training them in other areas of the kitchen, and now people stay for much longer. I’m lucky that I don’t have high turnover.

I like bad Yelp reviews because … They keep me grounded.

I don’t wear chef whites because … for me clothing is not just fashion, it’s a way of life. I never wanted to be ordinary. Austin (the manager at Kalaya) walked in one day and I was wearing my Issey Miyake jumpsuit and I was making dumplings, and he said ‘You are not cooking in this outfit’ and I said ‘Yes, I am.’ I believe in not you are what you eat, but you are what you wear. What I’m going to wear that day gets me excited to get up and go to work.

The secret to cooking in couture without making a mess is … I make a mess sometimes. I don’t wear an apron, but that’s what it’s meant to be, the clothes are meant to be worn. I appreciate good stuff but not to hang it in my closet. You have to use it.

In Philly I shop at … a lot of consignment stores. I get most of my clothes from a buyer in Japan. I’ve been collecting Issey Miyake for over twenty years, because I love his work. I love the structure and the laser cuts. My first big purchase was a crocodile leather handbag from Hermes that I bought in Paris over 20 years ago.

My favorite restaurant in the city is … Fiore Fine Foods. I love Fiore, I keep telling Justine [MacNeil, co-owner of Fiore Fine Foods] that she is one of the most talented cooks in the city. I also love Zeppoli, Hungry Pigeon. Royal Sushi Izakaya and Little Fish when I want some good fish.

If you think my food is too spicy … you’re eating it wrong. The toasted beef curry is very spicy, but you’re not supposed to have just that. You should have a little toasted beef, then a bite of papaya salad, maybe some cucumbers, eat some rice. It has to be balanced. In Southern Thai food, we eat peppers, we eat chilis, but we don’t eat it until we get sweaty and die. We eat it because peppers help open up your appetite. Plus, it’s healthy and good for your digestion. It’s a way of living that we’re bringing to you here.

To everyone who thinks Thai food has to be super-cheap, I say … This is my cuisine, it is my integrity. It’s not just food, it’s my culture, and my memories. This food has not just been cooked yesterday, it’s been cooked in my family for a thousand years. People are pretty open-minded now and our job from the moment you walk in the door is to show you what Thai food can be, and if it works, you’ll come back.