In Joey Baldino's new cookbook, Dinner at the Club: 100 Years of Stories and Recipes from South Philly's Palizzi Social Club, we learn about the soul and spirit of one of South Philly's favorite Christmas traditions. 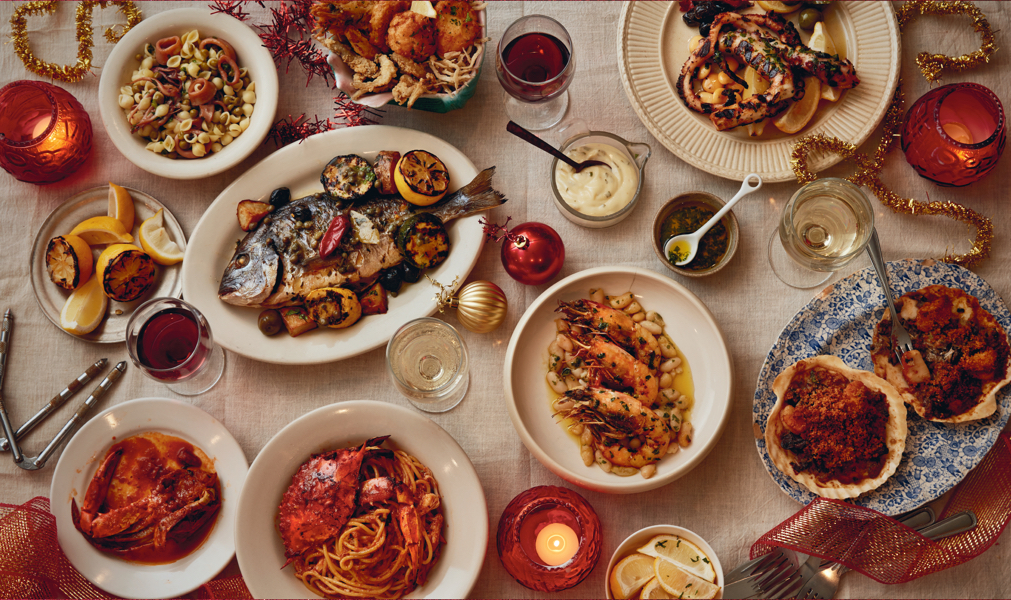 Palizzi Social Club is a very special place to its members — a refuge from the outside world filled with crab pasta and swordfish spiedini. It’s a special place in Philly’s restaurant scene, too, somehow occupying both destination and neighborhood status, traditional (the food) and modern (the cocktails) menus.

But Palizzi is extra special to Joey Baldino, owner of Zeppoli in Collingwood and heir to the social club, passed down to him by his late uncle. So special that he wrote a book about it with local food journalist Adam Erace (a South Philly native) about its history as a century-old club for Italian immigrants and all the recipes and food traditions they brought with them — like the Feast of the Seven Fishes, a Christmas Eve dinner that’s transcended South Philly rowhome kitchens into Italian restaurants all over the city. In this excerpt from Dinner at the Club: 100 Years of Stories and Recipes From South Philly’s Palizzi Social Club, Baldino offers some guidance on how to throw a Feast of the Seven Fishes dinner.

If such a thing as an Italian American calendar existed for South Philly, Christmas Eve would be the most important day of the year. It would be highlighted, underscored, and circled in red magic marker. Four days before the date would be a reminder: “Order the fish” — seven fish at least.

The Feast of the Seven Fishes, as the big Christmas Eve gathering is known, is not exclusively a South Philly thing, or even a Philly thing. All across the country, where there are descendants of Italian immigrants of the early 1900s, there are Christmas Eve spreads stacked with flounder francese, scungilli salad, mussels fra daviolo, stewed baccala, shrimp scampi, and dozens of other seafood dishes. Nobody knows whether the tradition has legit roots in Italy or was something immigrants invented after coming to America, and the significance of the number seven is similarly up for debate. The seven virtues, the seven sacraments, the seven days of creation all get credit.

Seven is a floor, not a ceiling, and many cooks take a more-is-more approach. While I was growing up, the spread at my Uncle Ernie and Aunt Mary’s featured probably twenty different dishes served family style on their huge dining room table. Their son, my cousin Al, has carried on the tradition, and it’s still a family effort. I order all the fish. My mom, sisters, and cousins clean and prep it. Al cooks it. The abundance of food has not changed, either. At least one dish is routinely forgotten — “Oh, no! We forgot the shrimp in the fridge!” — but it’s always okay because we just head back over for leftovers on the day after Christmas.

There are no set species; each family has their own repertoire and favorites. For some, it’s not Christmas Eve dinner without fried smelts and braised eel. For others, clams and macaroni in white sauce is sacred. Putting on this meal is a major undertaking, and eventually, hopefully, and sometimes not without a power struggle, the torch gets passed to the next generation, which has to navigate its own balance of traditional and “modern” dishes. In the ’80s, that meant shrimp cocktail and bacon-wrapped scallops. Today, it’s fish tacos and sushi trays. While some die-hard relatives might gripe, the tradition is less about the seafood than the gathering, having that day on the calendar every year that everyone in the family knows exactly where they’re supposed to be and what they’ll be doing, which is spending time together.

You don’t need to be Italian to throw a Seven Fishes feast. Our neighborhood is more diverse than ever, and lots of newcomers have adopted the tradition and made it their own. Several recipes in this chapter appear on my family’s Christmas Eve table every year. Try one or the entire menu. Just make sure to invite plenty of people over.

Canned peas have a bad reputation, but give them a chance in this satisfying squid stew, which is less about the peas themselves than the liquid in which they’re packed. This juice is a magic ingredient, subtly sweet and the foundation of the broth that lightly coats the calamari. You can serve this as a soup  on its own or bulk it up with cooked pasta, which is how we do it at the Club. Small shells or tubetti work particularly well, as their holes catch the peas, but I also love this with our Potato Gnocchi.

Heat the onion, smashed garlic clove, bay leaves, black pepper, and 1⁄4 cup (59 ml) of the olive oil over low heat in a medium pot. Cook until the onion is translucent, about 10 minutes. Add the peas and their liquid to the pot and increase the heat to medium. Bring to a simmer and remove from the heat. Remove and discard the bay leaf and smashed garlic.

Heat the remaining 2 tablespoons of olive oil and the chopped garlic, parsley, and red pepper flakes in a large Dutch oven over medium heat until fragrant, about 2 minutes. Add the pea mixture and the calamari and bring to a simmer, occasionally stirring until the calamari is warmed through, about 6 minutes (it should be brothy). Garnish with grated Parmigiano-Reggiano.

Combine the olive oil, bay leaves, chile, lemon, garlic, and onion in a large Dutch oven over low heat. Slowly cook to flavor the oil, about 8 minutes. Meanwhile, in a medium bowl, season the calamari with the salt, black pepper, and sugar. Move the vegetables to 1 side of the pot and increase the heat to medium-high. Wait 2 minutes, then add the calamari in a single layer as evenly as possible. Sear the calamari on 1 side for 3 minutes. While the calamari cooks, tie the parsley, basil, and rosemary into a bundle with kitchen twine. Add the herb bundle and Chablis to the pot and bring to a boil. Add enough water to just cover the calamari and lower the heat to a medium simmer. Cover and cook for 1 to 11⁄2 hours, or until the calamari are very tender. Let cool to room temperature. Remove and discard the bay leaves, chile, lemon, garlic, onion, and herb bundle. Set aside at room temperature.

Each product in this story was selected by an independent editor. Philadelphia magazine may earn revenue as a result of purchases you make through these links.
Read More About:
You Might Also Like