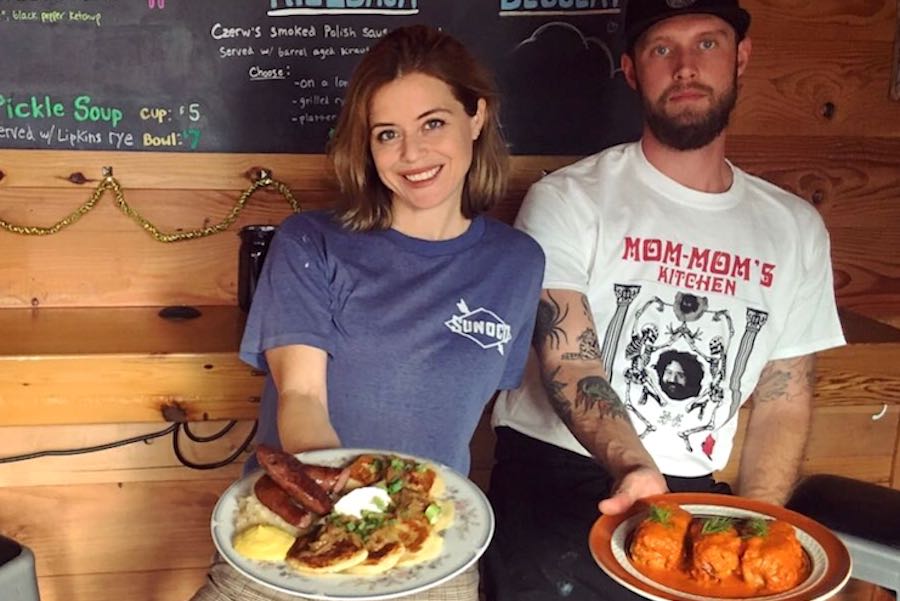 First, there was Mom-Mom’s Polish food cart, a roving truck serving perfect pierogi, stuffed cabbage, and kielbasa all over town. Then came Mom-Mom’s Kitchen, a brick-and-mortar version in Bridesburg, where Inquirer restaurant critic Craig LaBan was delighted by the Polish platters. And now, the owners of Mom-Mom’s are set to open another iteration, this one on South Street right next to iconic Philly dive bar Bob & Barbara’s Lounge.

Mom-Mom’s owners Kaitlin Wines and Ryan Elmore say they expect to open Mom-Mom’s South Street before Thanksgiving. And while the hours of operation haven’t been finalized, Wines and Elmore say they plan to take full advantage of the late-night crowd that Bob and Barbara’s brings, with food service until 1 a.m. on busier nights on the block.

While Mom-Mom’s in Bridesburg is a sit-down affair, Mom-Mom’s South Street will have only a takeout window, since the restaurant space is just 150-square feet. But, again capitalizing on their popular neighbor, Mom-Mom’s will offer takeout trays, so you can bring your pierogi and kielbasa into Bob and Barbara’s to enjoy alongside your shots and beers.

The arrow points to the location where Mom-Mom’s South Street will open, just one door away from Bob and Barbara’s. (Photo via Google Maps)

“I love the fact that we are connected to Bob and Barbara’s,” says Wines. “They’ve been there for so long, and there’s this vibe there of old, authentic Philly, and we’re excited to become a part of that.”

Mom-Mom’s Polish Food Cart Goes Brick and Mortar in Bridesburg
The 16 Best Pierogi Spots in Philadelphia
Yes, Somebody Actually Made a Pierogi Hoagie

The pair just launched a Kickstarter to help with the opening costs of Mom-Mom’s South Street. Donor rewards include things like Mom-Mom’s t-shirts and a dozen pierogi all the way up to a full-on Polish feast.

“I thought that I’d be able to do all of the work on the South Street space myself,” Elmore tells Foobooz. “But amidst doing the food truck and the [Bridesburg] restaurant, there’s just not enough time. This Kickstarter will mean that I don’t have to do everything myself.”

As for the Mom-Mom’s food truck and Bridesburg spot, Wines says that they aren’t going anywhere, but she suspects that the Mom-Mom’s in Bridesburg will become more of a private party and collaborative dinner space once Mom-Mom’s South Street gets up and running.

The news of Mom-Mom’s coming to South Street is one of several big recent and upcoming changes to the block.

Little Spoon Cafe had its last day of service two weeks ago, and it’s unclear what will be moving into that space on the corner of 15th and South.

The Cambridge reopened a few weeks ago after a large renovation and complete menu overhaul, and its owners will soon open Wine Dive next door. Speaking of wine, Jet Wine Bar debuted a seasonal wine garden earlier this year.

And next year, Southern-inspired Rex 1516 plans to move from its current small location at, well, 1516 South Street, down the block to a much, much larger space inside the mixed-use development where the historic Royal Theater once stood.