Hiroki is just another fancy omakase restaurant in a world already full of them ... right? 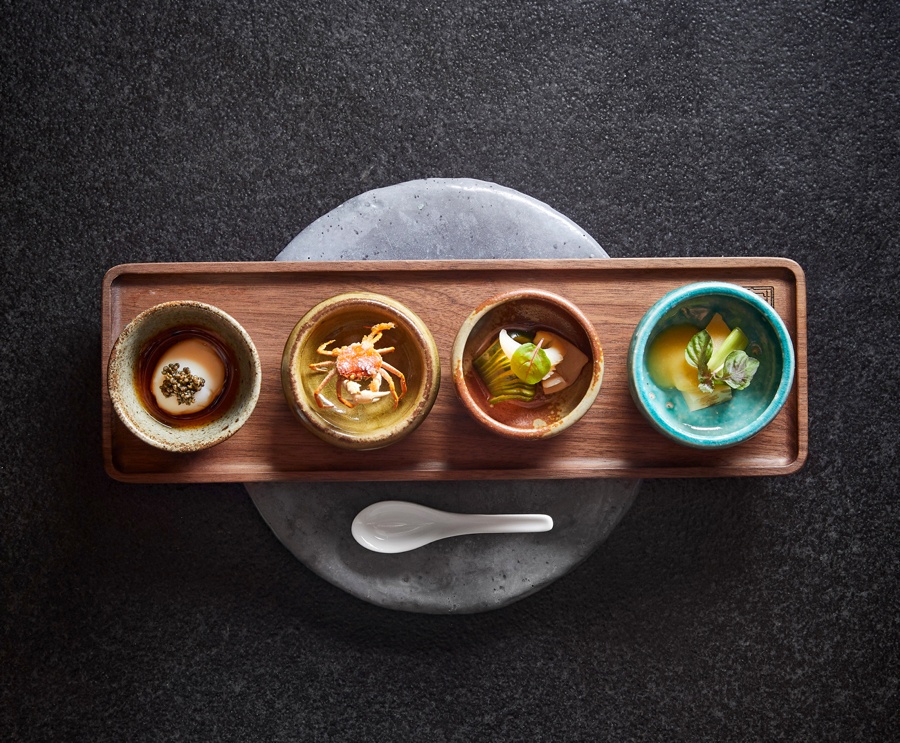 This review should be two sentences long. Six words, total:

Hiroki is perfect.
Go there now.

Nothing more. No justification. No explanation. Just go in cold, knowing nothing, expecting nothing except what any educated diner might from any omakase-only sushi spot. Many courses, chosen by the chef. Expensive. Fancy. Blah blah blah. 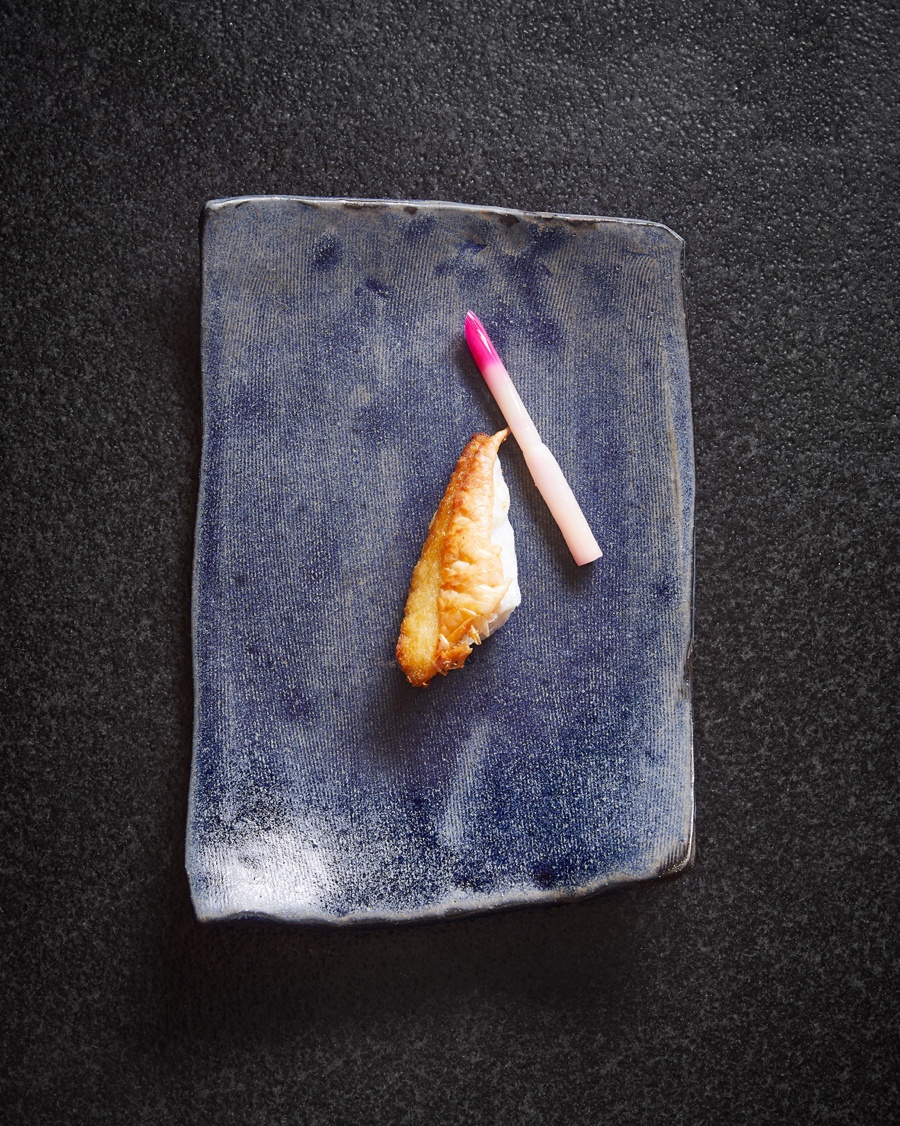 Go cynical. Go thinking that you’ve already eaten a dozen omakase menus and can’t possibly be impressed by yet another one. Go thinking that there should be a joke somewhere about sushi and Fishtown and the semi-hidden door behind Wm. Mulherin’s Sons. Go like I did, expecting just more stupid excellence at a place you know must be good because of the names involved (Mulherin’s, Method Co., Hiroki Fujiyama himself, ex of Morimoto) and the money that Hiroki is charging. Go jaded, please.

Because if you do, you’ll be all the more suitably prepared for the magic trick Hiroki pulls — the brilliant, small, almost unnoticeable subversion of it. Because Hiroki isn’t only as good as you’re expecting it to be in your hard, weary, surfeited little foodie heart. It’s better. 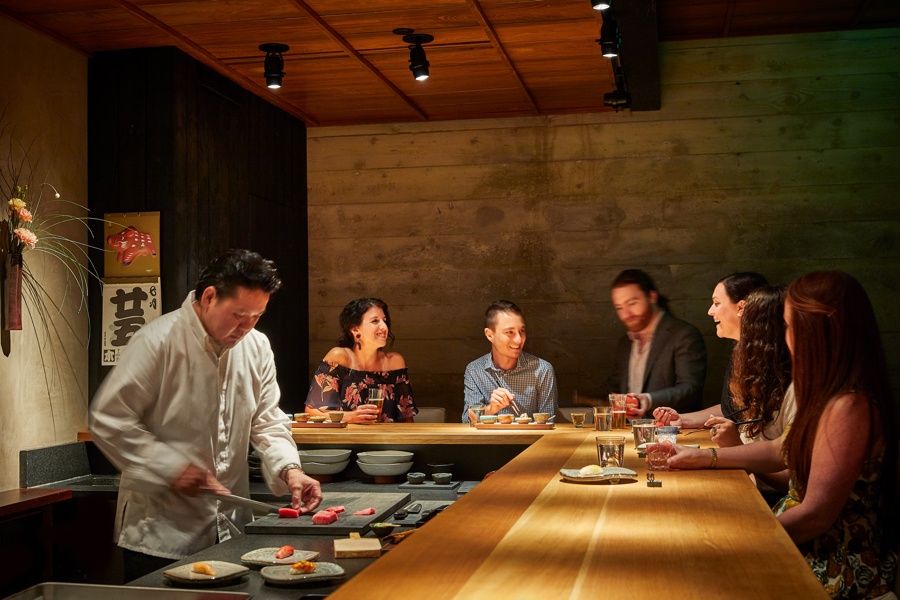 Hiroki Fujiyama behind the bar | Photo by Michael Persico

Hiroki isn’t perfect — that was hyperbole. Perfection, as a consistent state, is unattainable. But to sit in the small, spare, quiet room and watch a man chasing perfection? That’s remarkable. To see it on a plate — in a nugget of tilefish fried with its scales, geometrically positioned against a shoot of pink-tipped pickled ginger root, or the surgical application of a single dot of red chili paste to the empty real estate of waiting ceramic — or to taste it in o-toro that melts against your tongue, or the pinkish flesh of Japanese sea bass laid over sushi rice touched with soy and a finger-smear of fresh wasabi taken right from the sharkskin grater, is to experience something so rare and special that you’ll remember it forever.

Likewise watching Fujiyama work: the way he makes his knife cuts, the way he selects each piece of fish. The robotic precision is stunning. I believe that if you were to open him up, remove his entire cerebrum and cerebellum, and then put him back in front of his cutting board, no motion would change. He would operate on pure lizard-brain and muscle memory. 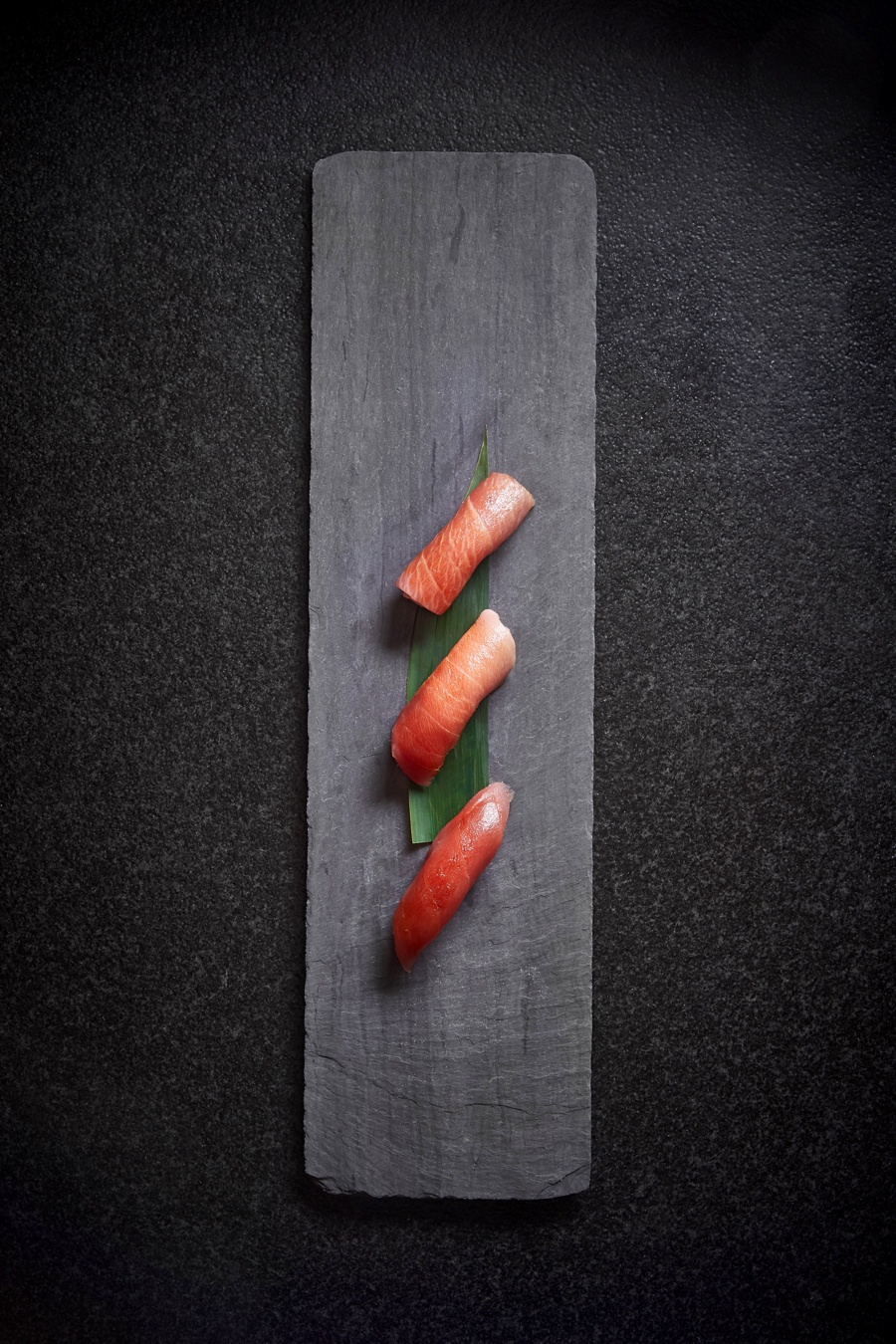 And yet he was also careless. Or carefree, maybe. Dabbing soy onto things as an afterthought. Doodling black sauce over sea eel poached in broth, knowing that however it fell, that was how it was supposed to fall. Trusting in gravity as much as his own skill. Each piece of nigiri coming from his hand, served at the heat of his own body so that his body temperature became an essential ingredient in the process.

The toro handroll was like the most indulgent ice-cream cone ever. He served uni like it was nothing — a whole spoonful of it, dabbed onto rice and not even rolled, just served in a loose jacket of nori, like a seaweed taco.

“Eat,” he said, miming, because half the crowd at the bar couldn’t understand that he wasn’t even putting it on a plate; he was just handing it over, the whole thing meant to be devoured in one huge bite. 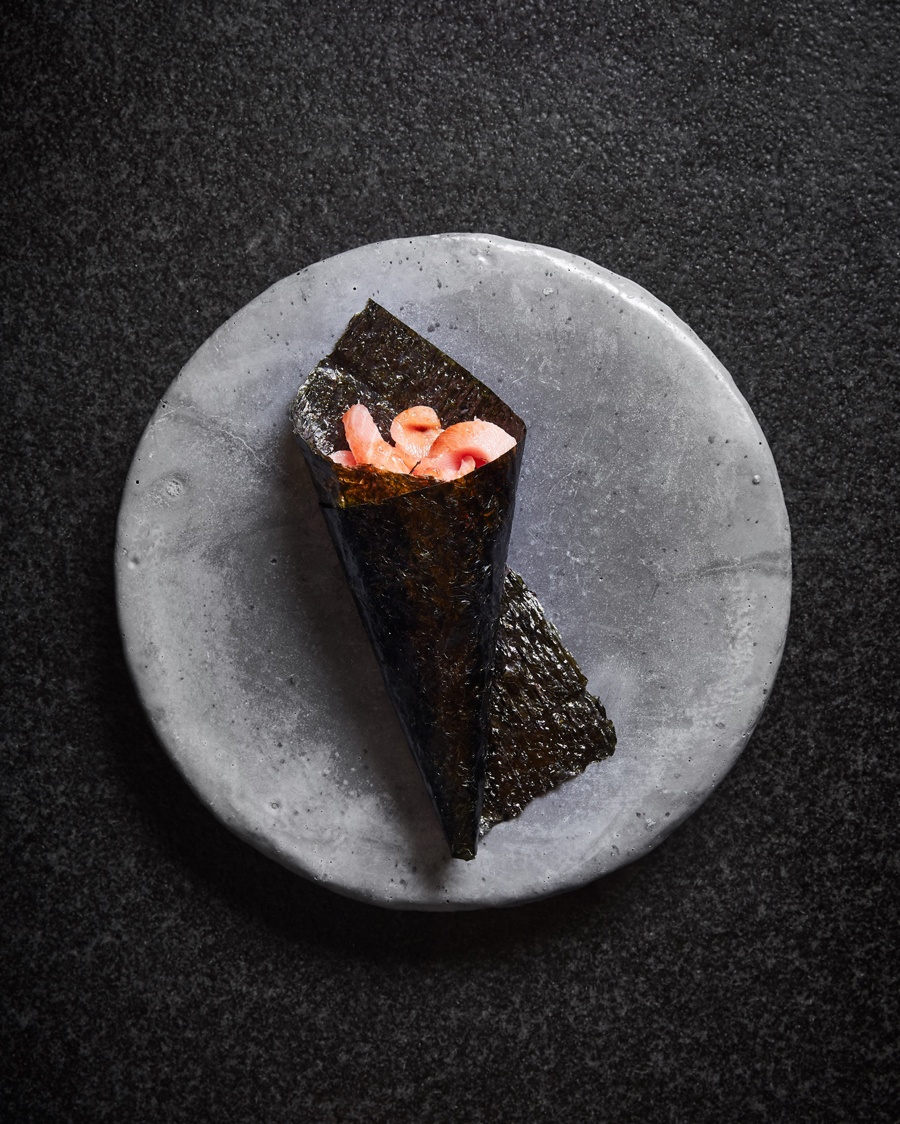 The four zensai (appetizers) were all complicated works of art served in tiny bowls: bamboo shoot with sweet mustard miso, fried greeneye, quail egg in soy broth, a single bite of squid over a blooming flower of cucumber marinated in rice vinegar. Everything that followed was about stripping things away. The sashimi were spare. The wagyu came under a gentle snowfall of flaked salt, nothing else. Then the chopsticks go away and you eat nigiri with your hands, the pieces placed individually on plates meant to serve only as temporary stages. For the uni and the handroll, even the plates were superfluous. 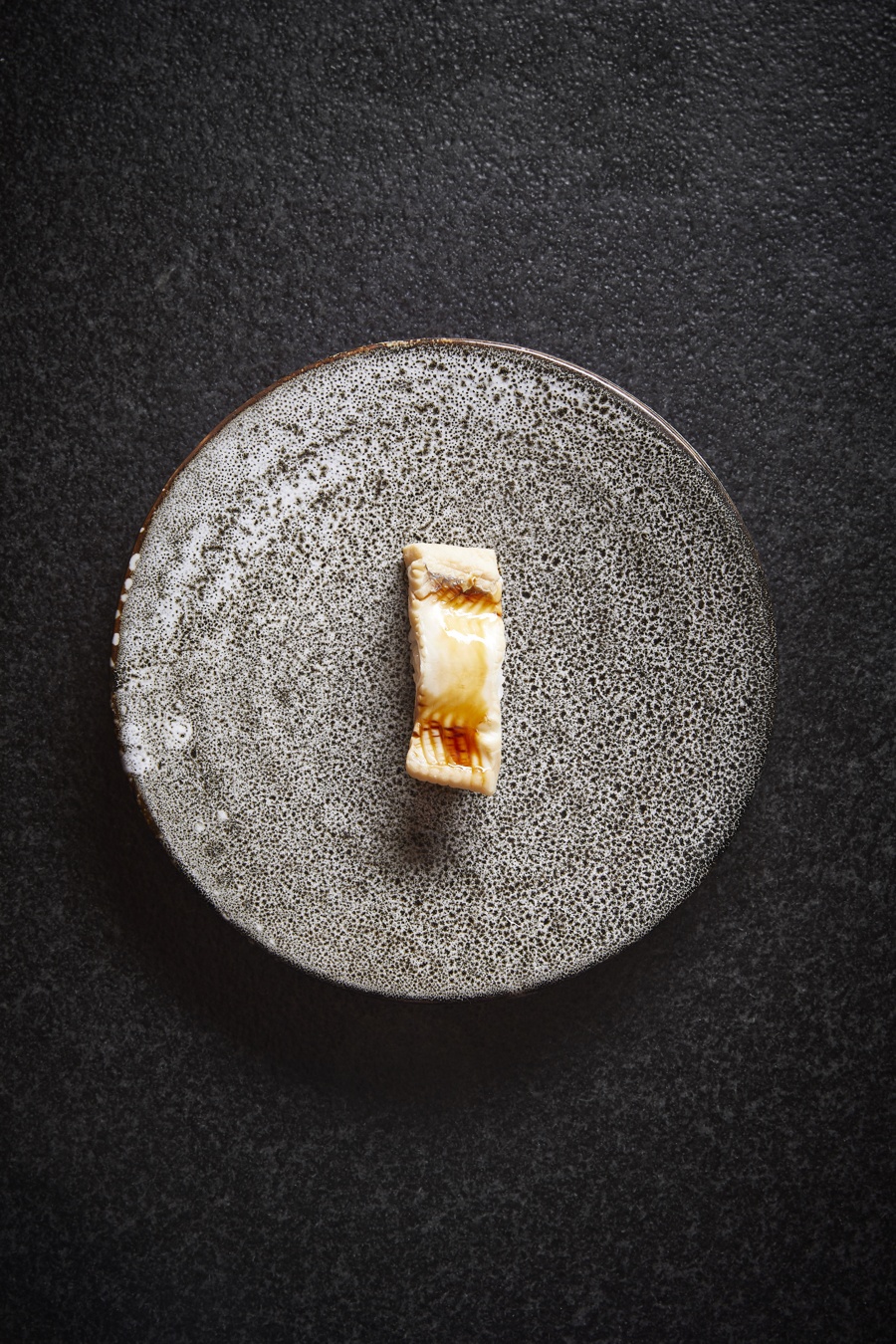 There’s a logic to Hiroki’s menu, a progression that’s important and all about de-complicating, de-mystifying, revealing the excellence of individual ingredients. And yes, the dividing line between truly great sushi and the best sushi is vanishingly thin. I am willing to entertain the argument that it might be imaginary — that operating at so high a level flattens the top of any bell curve. Best is relative. Situational. At a sushi bar, it has more to do with the ingredients than the hands that shape them.

But Hiroki is different. And you should go. That’s it. If sushi interests you — if Japanese cuisine or the rigorous pursuit of excellence or that weird intersection of perfection and nonchalance interests you — you have to go right now, before going at all becomes impossible. Because I promise you, you won’t find another meal like this in Philly right now.

4 Stars — Come from anywhere in the country