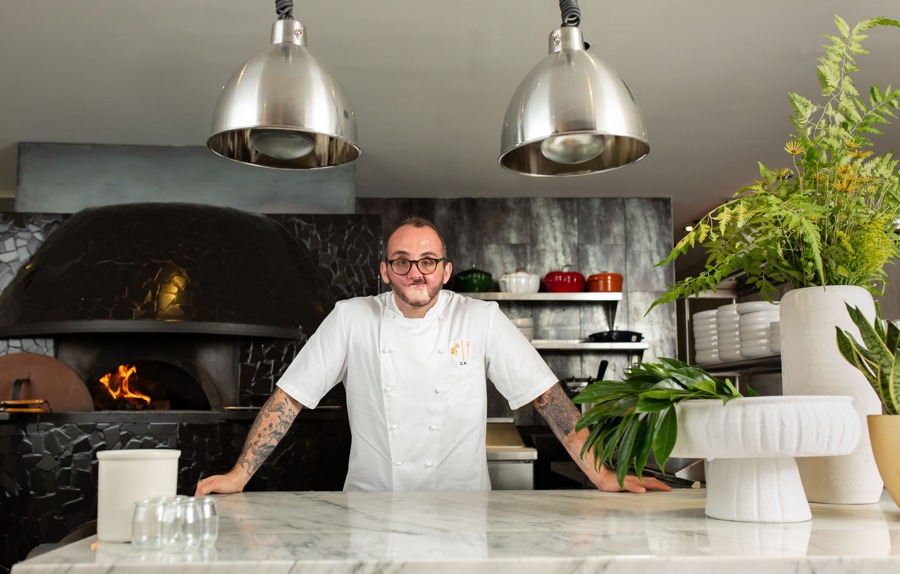 Chris Kearse took his time. Seven years, he owned and operated Will, a darling French restaurant on East Passyunk Avenue — a BYOB timed perfectly to our modernist, meat-glue, tweezer-food phase; and later, once we grew exhausted of avant-garde plating and tasting menus and sous vide everything, a modern BYOB that appealed to our proclivity for cozy, chef-driven BYOBs. Will was something for everyone, and then it closed to make way for Forsythia.

And Forsythia happened fast. Kearse closed Will on June 2nd, and he’s opening Forsythia on August 23rd. Meaning, he took about three months to open a full-scale 60 seat restaurant with a (14-seat) full bar. I’m sure that has to be some kind of record, and can only mean that Forsythia was in the works for a long time, in his brain and otherwise.

“Forsythia is an extension of my evolution as a chef,” Kearse says. “It’s the next step. It’s not Will 2.0 — Will was very focused around one ingredient. Here it’s so much a cross section of ingredients. It’s more fun. It’s classic French technique, but creative and with a twist.”

So, no tasting menus. No prix fixe anything. More small-plate grazing than three-course dining. Some items — a bouillabaisse; a rabbit porchetta —  for the table to share. Happy hour on weekdays. The bar (headed up by general manager Jennifer Camela) has got some nifty cocktails (heavy on the gin), wine cocktails, and natural wine galore (heavy on the French).

It’s located in the old Capofitto space at 233 Chestnut Street. Take a tour of the restaurant and peep some food shots below. Scroll all the way down for the menu (subject to change). Dinner reservations go live tomorrow, August 8th. 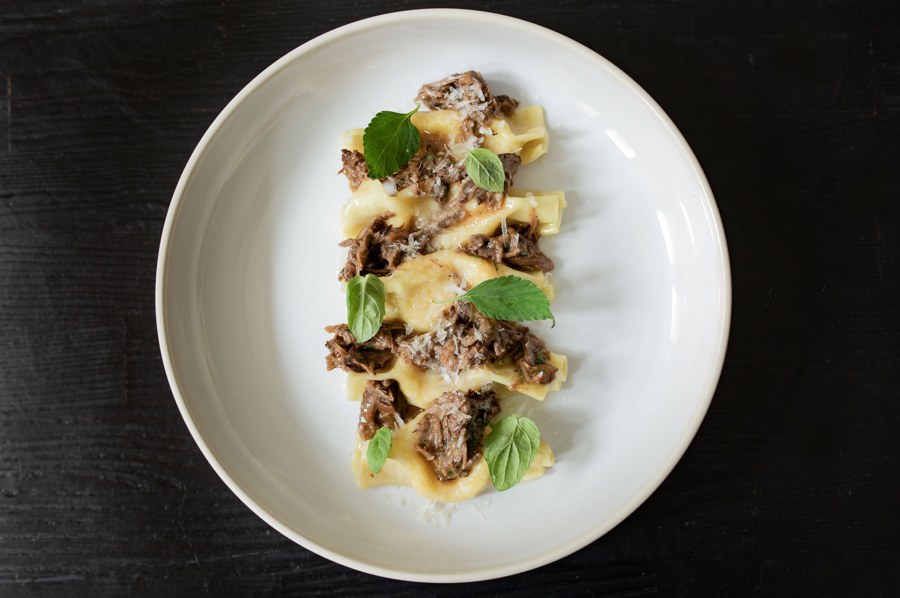 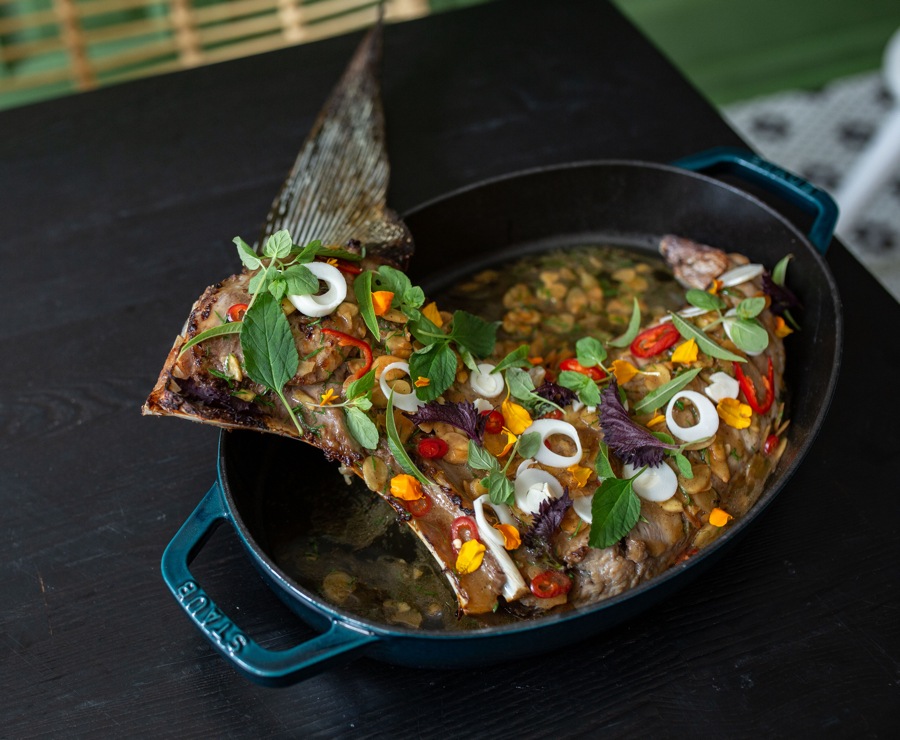 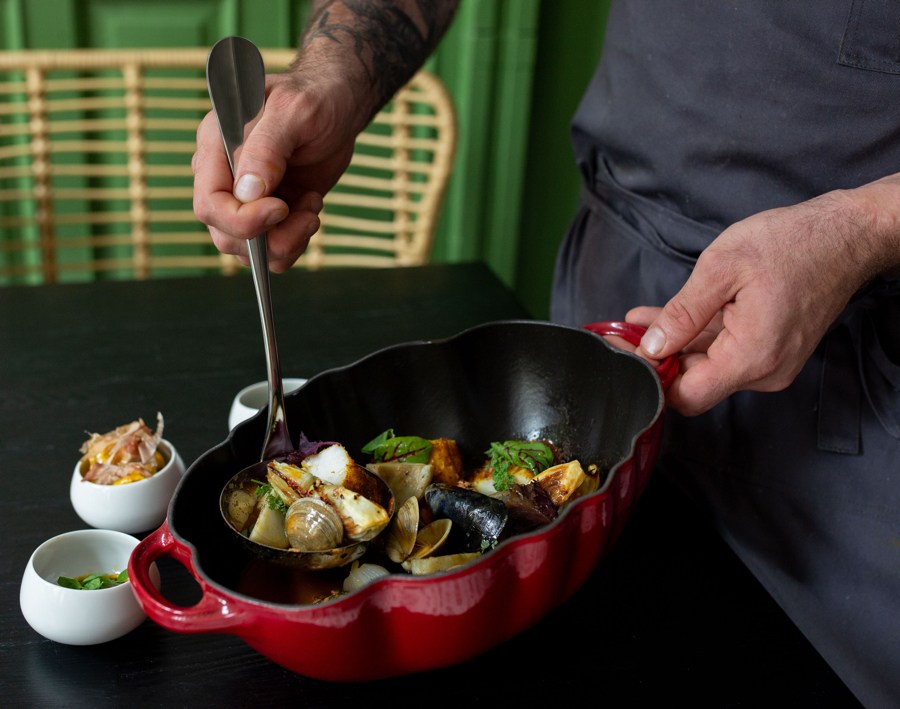 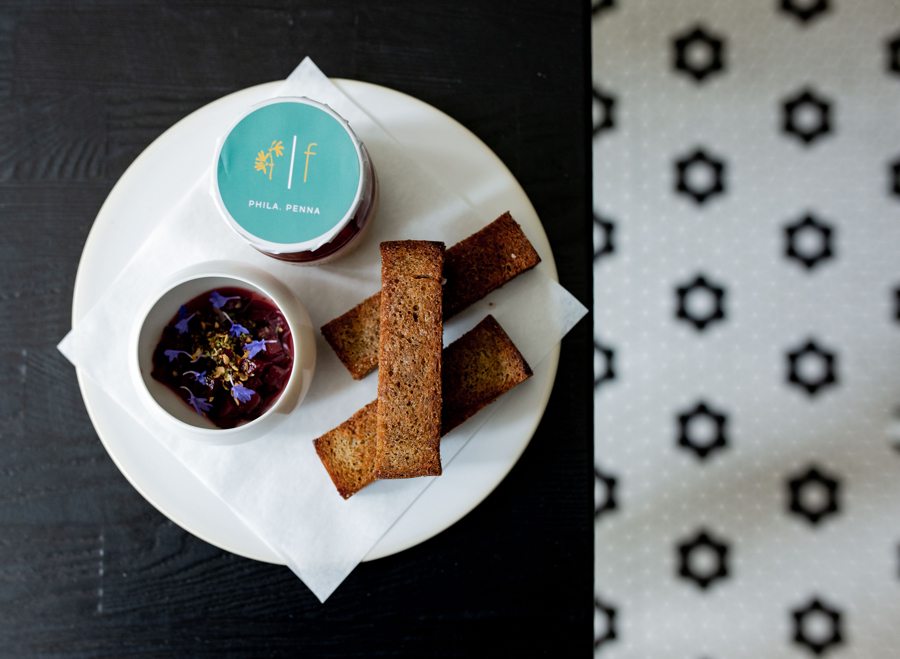 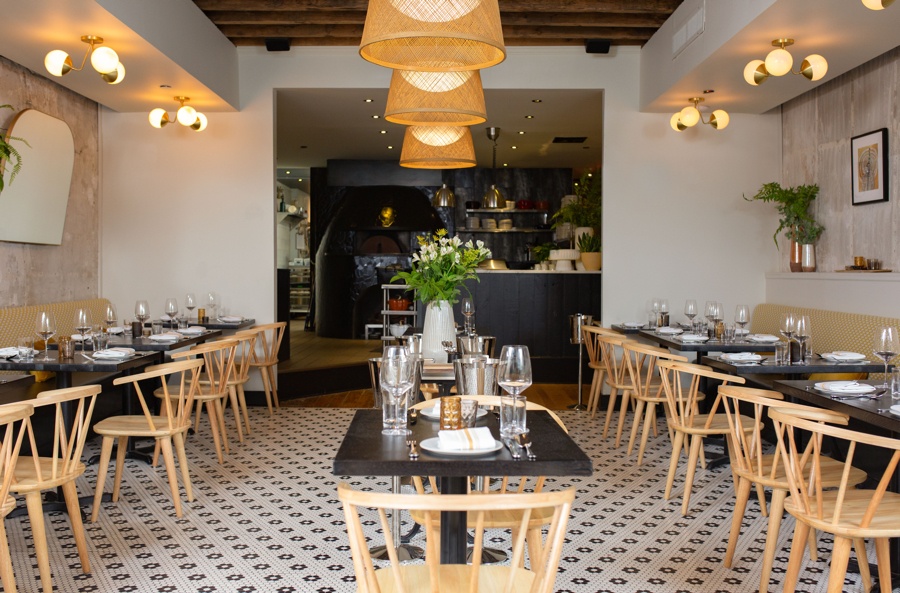 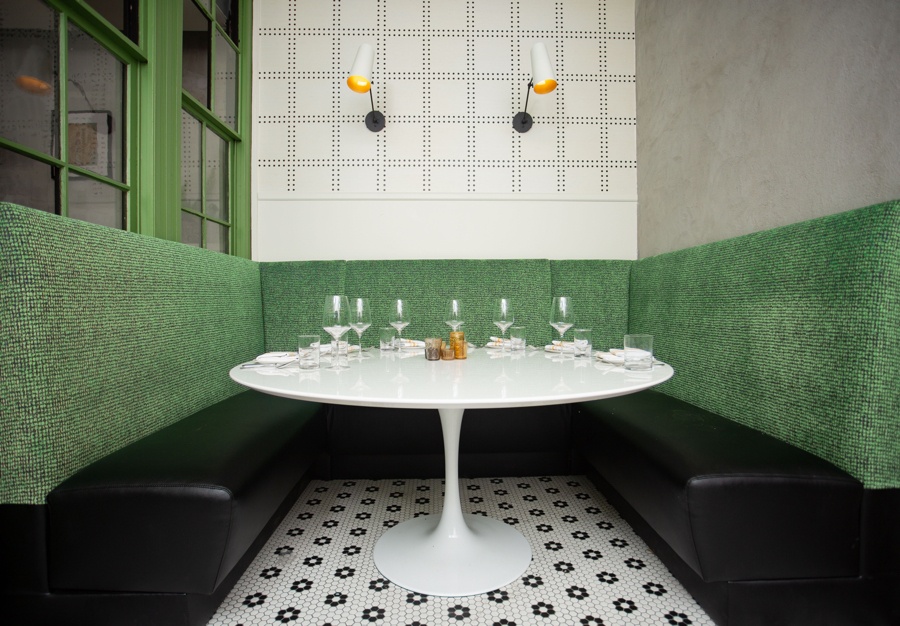 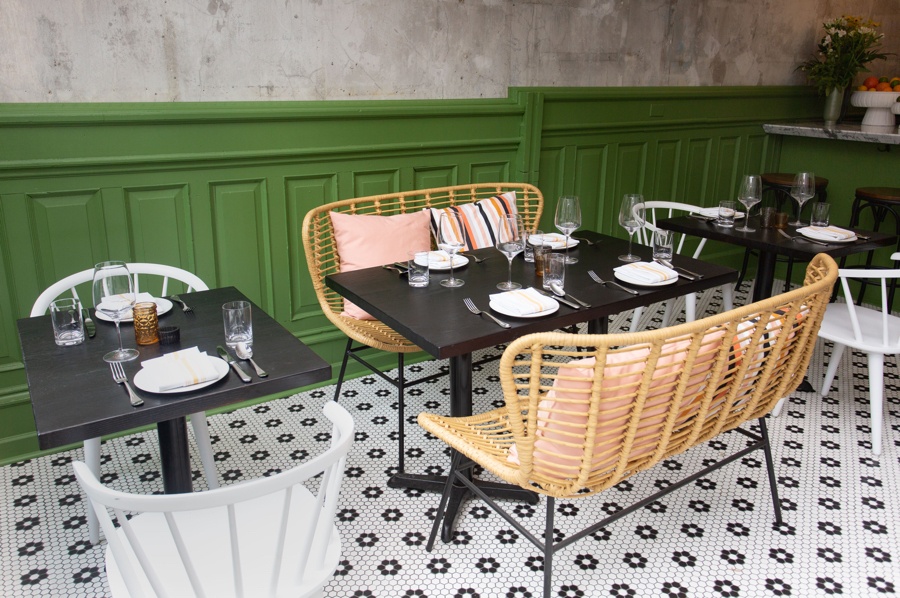 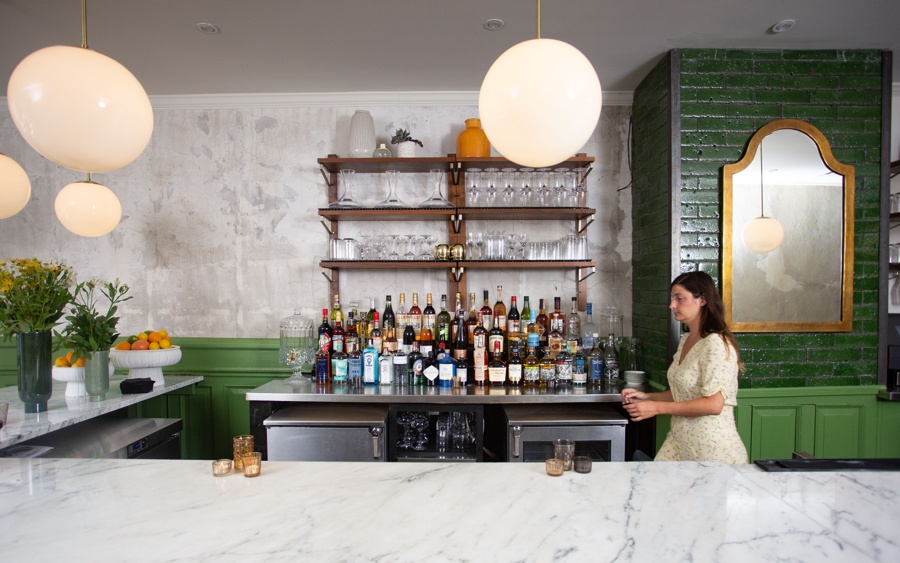 The bar | Photo by Lexy Pierce 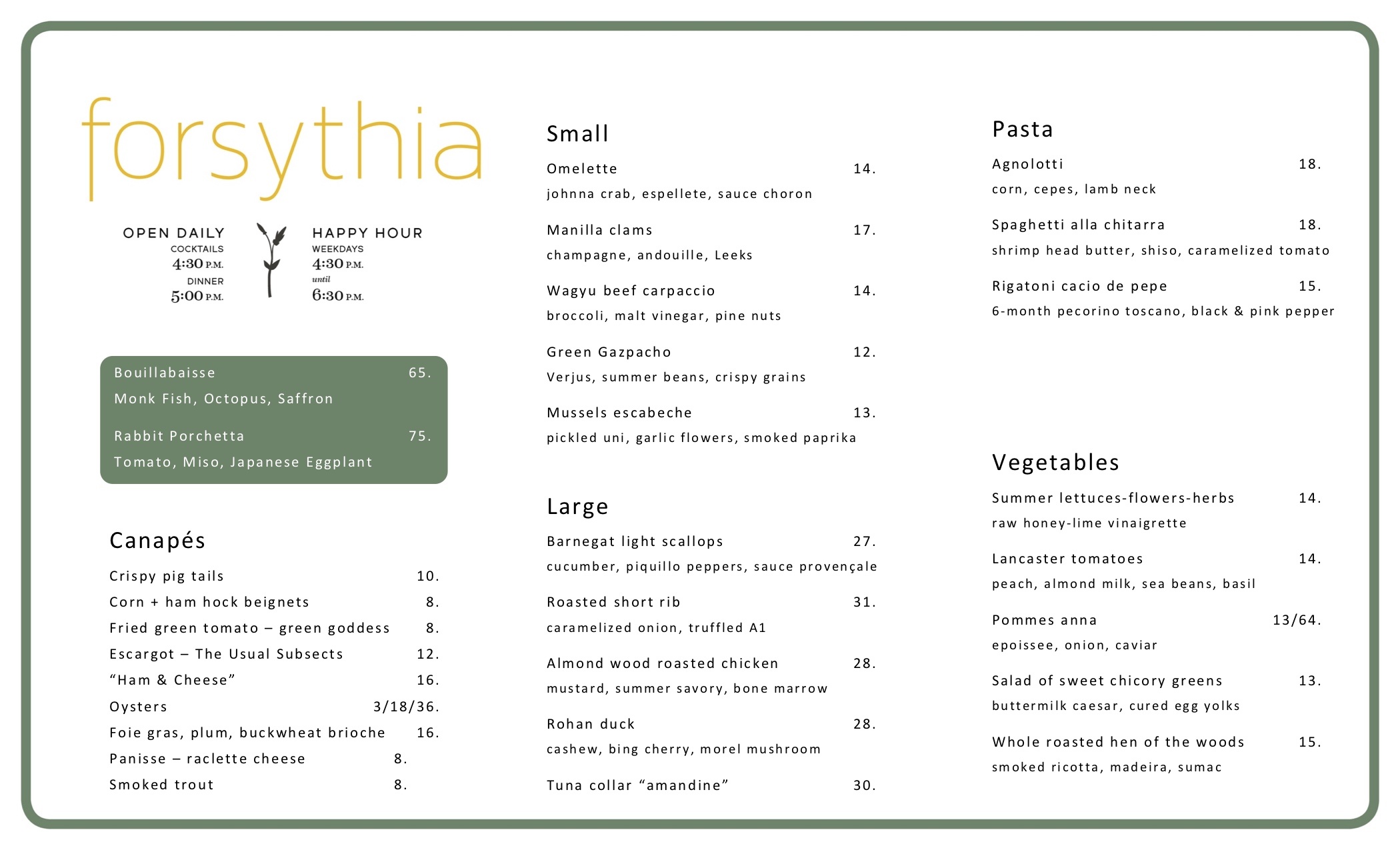