Vernick Fish and Jean-Georges Philadelphia are taking reservations now for their mid-August opening. 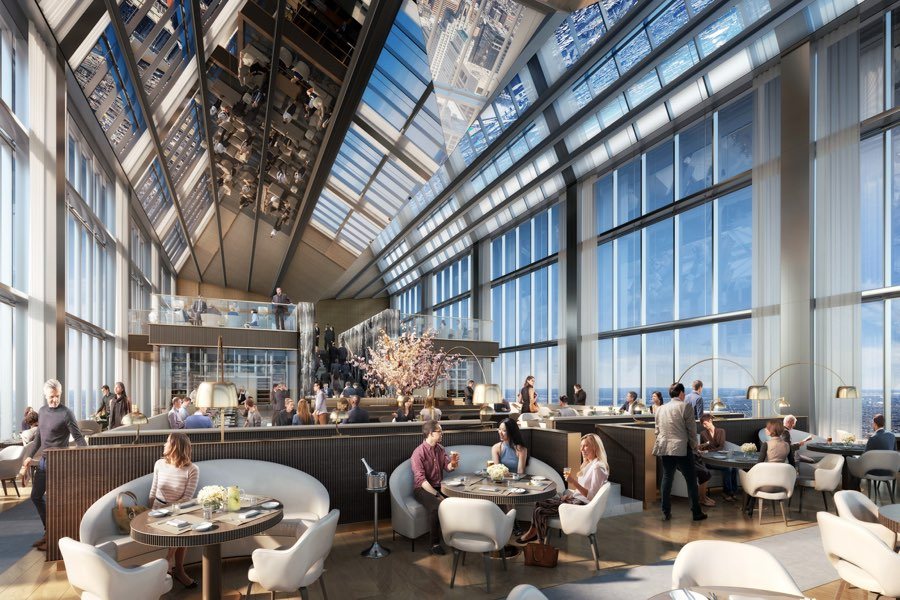 It’s been two years since we learned that Greg Vernick and Jean-Georges Vongerichten would be opening restaurants in the new Comcast Technology Center, with the Vernick Food & Drink chef-owner occupying the center’s ground floor and his longtime mentor taking over two floors at the top of the Four Seasons Hotel. Now, we know that these concepts — seafood-focused Vernick Fish, Jean-Georges Philadelphia on the 59th floor, and lounge JG SkyHigh on the 60th — will open on Monday, August 12th.

A few weeks before the 3,400 square-foot, 200-seat oyster bar and Jersey Shore-inspired restaurant officially opens its doors — seven years after his debut restaurant and two years after his James Beard win — Vernick is focused, grateful, and philosophical.

“The thing I’m most proud of is that this didn’t happen overnight,” he said. “We didn’t jump into expansion. We focused on Vernick Food and Drink and continued to improve that before we went down that road.”

Not that there wasn’t outside interest. (“You get recruited,” he said.) But Vernick takes inspiration from those who work for success slow and steady: Danny Meyer waited 10 years after Union Square Cafe before opening Gramercy Tavern. Nine years passed between Marc Vetri opening his namesake flagship and his second concept, Osteria. “We told ourselves” — we being Vernick’s wife Julie and longtime Vernick Food & Drink general manager Ryan Mulholland, who’s now at the Four Seasons spot — “‘Let’s take meetings, listen, learn, wait.” That strategy crystallized into kismet as the center’s ownership was considering both local and international chefs to headline its ground-floor and 59th floor restaurants. In a meeting with higher-ups from Comcast, Liberty Property Trust, and Four Seasons, the Cherry Hill native mentioned that much of his career was spent in working for Jean-Georges Vongerichten, rising through the ranks in several of the the internationally-known restaurateur’s New York kitchens before serving as a chef trainer at new Vongerichten properties in places like Qatar, Vancouver, and Tokyo.

That connection provided the spark for what was to come: mentor and mentee opening restaurants in the same building, representing not only a continuum of culinary excellence but grounding the Four Seasons project solidly in Philadelphia’s fine dining culture while bolstering its international profile.

With seafood, Vernick has given himself and his kitchen crew, headed by chef de cuisine Drew Parassio, a challenge — but he’s also exploring a passion for coastal cuisine that dates back to childhood meals on the Jersey Shore.

“Seafood is something I love to eat and prepare,” he said. “When we realized people were dining lighter and eating differently, we realized we could hone in on that concept in more detail with its own restaurant.” At the same time, Vernick Fish calls on the comfort the chef remembers from growing up eating Jersey Shore-style: “You can get something grilled, blackened, or fried. Here’s your fresh catch, with veggies, rice, grilled bread — I’m in my happy place.” 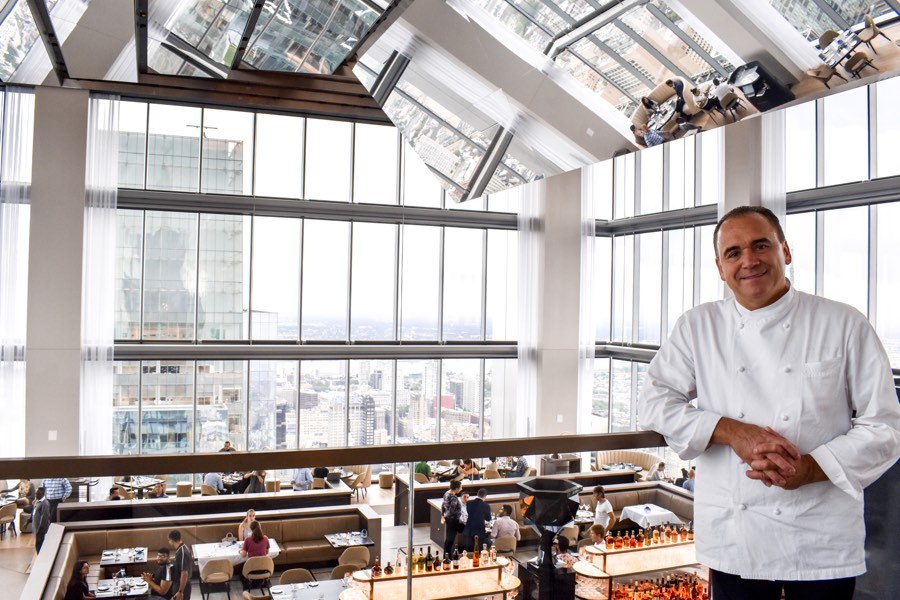 If Vernick Fish serves literally and figuratively as a grounding force in the new Comcast tower, giving the luxe property its context in Philadelphia’s culinary community, Jean-Georges Vongerichten’s concepts high atop the Four Seasons Hotel provide the city’s dining scene with a new benchmark — a new way to look at what we do here, and from a great height.

You feel it as soon as you ascend in the high-speed elevator — it travels one floor per second, according to a Four Seasons rep — up to the 60th floor and cocktail lounge JG SkyHigh, which serves simultaneously as sister concept and entryway to the real showstopper: Jean-Georges Philadelphia.

“It was natural for us to go back in the same building and cook together,” said Vongerichten, sitting in a booth at one corner of the restaurant that will soon be one of the two most sought-after tables in the city. But working with Vernick, his protege, wasn’t the only draw: one of his favorite architects, Norman Foster, would design the restaurant. Enter the space and you immediately understand what he means: the restaurant is a visual marvel, creating a long moment of awe for guests before a single dish has hit the table.

Descend a staircase with waterfalls for walls to the 59th floor and the city opens up in front of — and above — you. Forty-foot glass walls enclose the space, which features sleek, muted decor to best highlight the expansive view of Philadelphia that’s the real centerpiece. And thanks to an ingenious ceiling, there isn’t a bad table in the house: Angled mirrors mounted above the dining room give guests who don’t score a window seat a view of the city below from anywhere in the restaurant.

But what it really boils down to is this: An international culinary icon with a dazzling 40-year career behind him like Vongerichten gets to pick and choose his projects — and Philadelphia’s dining culture drew him in.

“We’re a global group, but we’re local in content,” Vongerichten said. “Coming to Philly, it’s a super foodie town. Seeing what’s going on and how things are growing over the last 10 years, it’s pretty staggering. I only want to open in a city I’m excited to go to.” 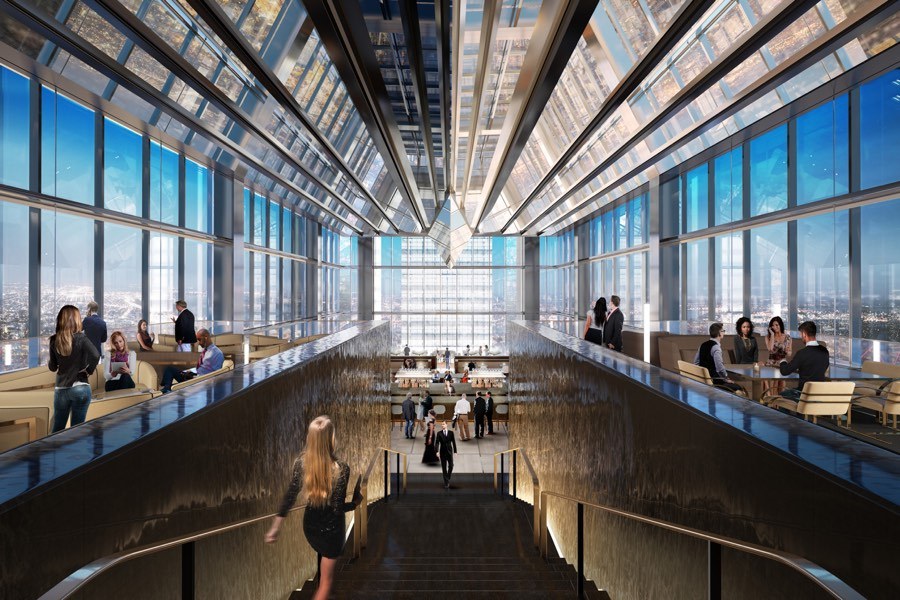 The Alsace-born chef brought in chef de cuisine Nicholas Ugliarolo from the Four Seasons Los Angeles to head up the kitchen at JG SkyHigh and Jean-Georges Philadelphia, which will serve à la carte menus at lunch and dinner as well as an evening tasting menu and small snacks at the bar.

Vongerichten describes the fare as “the best of what we do in New York” — greatest hits from restaurants like Jean-Georges and ABCV, his vegan concept — tweaked “with Philly in mind.” That means seasonal, contemporary fare blending a French approach and flavors the chef picked up during his travels in Asia — and Philly rather than New York prices,

“You can call it global, Philly, New York, French, Chinese — the end it’s personal,” Vongerichten said. “From my travel, my DNA is French, Asian for 5 years, New York for 33 years. It’s my souvenir” — his style is the culmination of a long and varied career.