For a dish so ubiquitous over there, molokhia sure is hard to find over here. 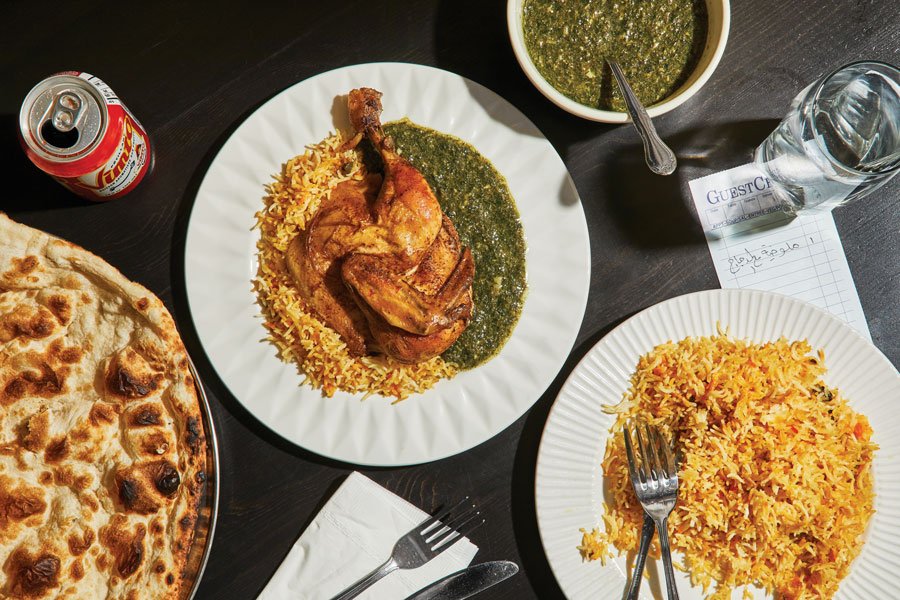 The molokhia chicken at Hadramout. Photograph by Michael Persico

Molokhia — say it “mo-lo-HEY-ah” — is the name of both a plant and a dish. The plant is a nutrient-packed river weed that sometimes goes by different names: Jew’s mallow or jute mallow, or whatever other spellings of its Arabic-to-English translation may exist. One time, I saw it sold as “Egyptian spinach,” which is fitting. Molokhia is unofficially the national dish of Egypt, which, as you know, has a very famous river.

The dish, like so many regional specialties (ratatouille in France; scrapple in Philly), began as peasant food (weeds are cheap) — basically a soup of chopped molokhia, garlic and coriander, ladled over rice. You eat it because it’s good for you — it’s said to help you sleep, help you digest, improve your eyesight, lower your blood pressure. Word of a soup so magical will spread if you let it — which is why you can find molokhia all over the Middle East and North Africa. It’s restorative and popular, the way chicken noodle soup is here.

But molokhia is not here. I’ve been eating at Middle Eastern restaurants in and around Philly for quite some time now, and I’ve never seen it on a menu. Philly’s lone Egyptian-leaning full-service restaurant, Aya’s Cafe in Logan Square, doesn’t list it on the menu. My guess is it’s a texture issue: When molokhia cooks slowly, it becomes just a tad swampy. Slimy. A quality that isn’t exactly embraced by mainstream American tastes.

And then Hadramout, a tiny Yemeni restaurant, opened last year in West Philly. I was excited because its menu focused on the regional delicacies of Yemen and nowhere else — save for one single dish: the “molokhia chicken.”

When I asked my server why it was there, she said that it’s a popular dish in Yemen. And then she added, “I’m Egyptian, too, and I wanted it there.”

Published as “The Most Elusive Middle Eastern Meal” in the May 2019 issue of Philadelphia magazine.