We know you're excited when you see asparagus, ramps, and peas on menus after the first warm day in March. But if eating local and seasonal is important to you, here’s why you should be skeptical. 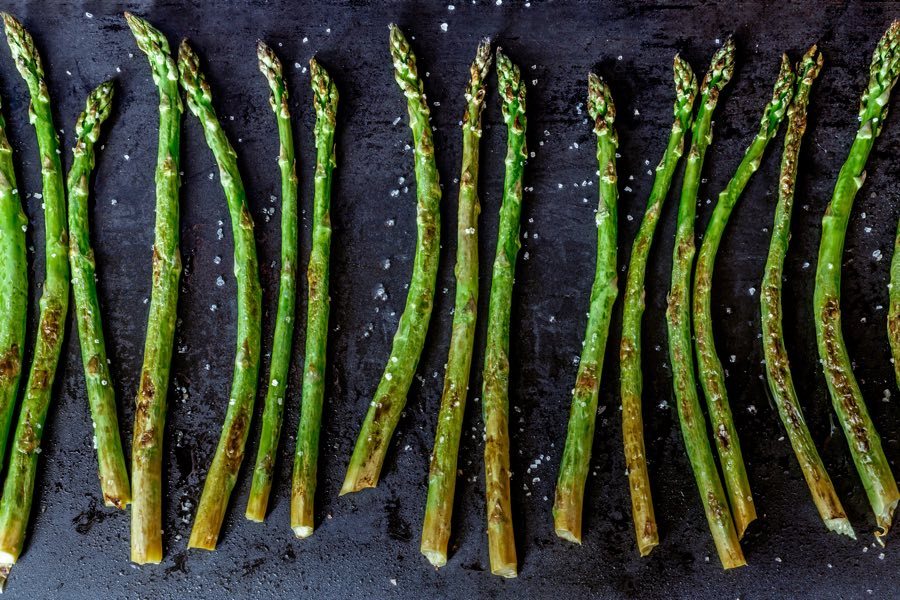 It happens every year, usually around the end of daylight saving time in early March.

Philly gets a freak 70-degree day, or the first sunny, mild weekend of the year. Daffodils poke shoots out of the ground. You go outside in a T-shirt, hang out on your porch, maybe even buy a bottle of rosé. You realize how desperate for sun and warmth you’ve been for the past several months.

And that’s when you start to see them on menus and Instagram accounts across the city: peas, popping up everywhere on menus. Bright green peas with radishes and gem lettuce in a salad. Pea tendrils as garnish. Sugar snaps and shelled peas and tendrils together in one dish.

The problem? It might feel like it’s already spring in Philly restaurants, but the calendar — and what local farmers have in the ground — don’t match up. Call it “season creep.”

In fact, if you consult a produce availability chart for our region and you’ll realize how much of what’s on most of the city’s restaurant menus isn’t local or in season, despite the restaurant’s best efforts to sell you on pretty plates full of veggies you’ve been craving for nearly a year.

The farm-to-table movement went mainstream in the early 2000s, and suddenly everyone wanted to source local — to be on trend, if not to support local farms (the true spirit of the movement). A decade later, it’s almost considered uncool to make too big a deal out of sourcing local at your restaurant, unless it’s the chef’s explicit approach. But restaurants still want to capture the excitement — and customer dollars — we feel around these early-season ingredients, even when they’re divorced from the provenance and sense of place that originally made them feel special.

And if you care about the integrity of what’s on your plate, the chefs who prepare it, and the sources they use — all of which contribute to a restaurant’s objective value — you need to educate yourself as an eater. Restaurants use stories to sell their food, and if part of the story is B.S., you should know.

“It drives me crazy,” said Heather McMonnies, the Montco-based farmer and forager behind Food Hedge, which sells specialty produce to Philly’s top kitchens. “You don’t even get peas until really late spring or even early summer — not nice ones you can be proud of.”

McMonnies and other small-scale growers will sometimes “force” small quantities of early-season crops like asparagus and peas by growing them under cold frames or in high tunnels (which trap and hold heat from the sun to warm the soil enough for the plants to sprout early). But the first flushes of ramps and morels you see on your Instagram feed? They’re often sourced from the Pacific Northwest, well before the season starts here.

The demand for foraged foods also means that some purveyors — McMonnies included — will source from outside the region for those items when they’re not yet available locally.

“I’m very open and honest with customers to say that we can get nettles, fiddleheads, and watercress about a month sooner than what might be locally foraged, and if that’s what you want, I have those connections — and sometimes they do,” she said.

When chefs see her availability lists, McMonnies notes what’s local, what’s not, and when she anticipates that local product will be available. But after that, it’s on chefs to communicate the provenance of their produce to the public.

“What you do and how you convey it to diners is completely up to you,” she said. “It’s a question of what’s the story the restaurant wants to tell.”

Hungry Pigeon chef-owner Scott Schroeder acknowledges that while running a restaurant that sources “around 95 percent” of its ingredients locally and in season takes a lot of work and a little extra money, chefs who don’t are missing out on a way to differentiate themselves in a crowded market. “It’s a big decision to make,” he said. “But it gives you and your restaurant a strong identity.”

But it’s not just demand from the average consumer that drives season creep. While chefs at some restaurants build locality into their business model, pricing often drives the decision to source generic product.

Take, for example, asparagus. Here in the Northeast United States, it’s the true harbinger that spring has arrived on our plates.

“Asparagus is available year-round from somewhere, so chefs start playing with it and adding it to their menus early because it’s available,” said Chris Cafolla, a sales rep for Delco-based FarmArt Produce, a distributor that works with farms in Pennsylvania, New Jersey, and Delaware to source local produce during the growing season.

“Early in what we consider the local asparagus season, Mexican and Colombian asparagus is very, very cheap — much cheaper than what local goes for,” Cafolla said. “Chefs don’t want to pay the price for local early in the season when the other option costs nothing.”

Local asparagus right now costs about 50 percent more that non-local for an 11-pound case. But, Cafolla says, things balance out a few weeks into the local growing season, when non-local prices spike and local “grass,” as purveyors sometimes call it, is abundant.

Asparagus and fingerling potato salad. Spring on a plate! #lunch 🌱

Plus, the asparagus from large-scale operations in Mexico comes in cleaner than, say, the product Cafolla sources from Fifer Orchards, a fruit and vegetable grower in southern Delaware, especially in earliest parts of the season when the farmer doesn’t yet have a full crew in the fields. Chefs can’t or don’t want to take the extra time to clean it.

But of course there are tradeoffs for cheapness and convenience: shelf life and flavor.

As the season progresses, the local asparagus he sources from Fifer comes in cleaner and better-looking. Since it doesn’t have to travel as far or pass through as many hands along the supply chain to get to a chef’s walk-in, it also has a longer shelf life.

“Mexican asparagus always looks good, it’s always clean. But it doesn’t have the flavor that a local product does,” Cafolla said.

Ultimately, it’s on consumers who are eager to eat seasonally and support local growers and foragers — and the chefs who make a point to support them — by looking for the names of local producers on menus and Instagram posts, keeping an eye on what’s for sale at your local farmers’ market, and learning what’s ready in the fields and forests around the region. And don’t be afraid to go a little Portlandia — politely — on your server.

Keep in mind that local availability changes from year to year, too: Chefs want local strawberries for Mothers’ Day brunch, but it’s rare that they’re in season in our region so early in May. But Cafolla said that for the first spring in seven years, he’ll have Fifer Orchards berries for customers in time for the holiday.

“Look around in your own garden,” McMonnies said. “If nothing is green yet, there’s nothing green coming from next door. If your allergies are really bothering you, maybe it’s time for some of those spring things. If you still need to wear a coat to work, it’s unlikely that things are coming from a truly local space.”