How he went from cooking at Parc to cooking for Joel Embiid. 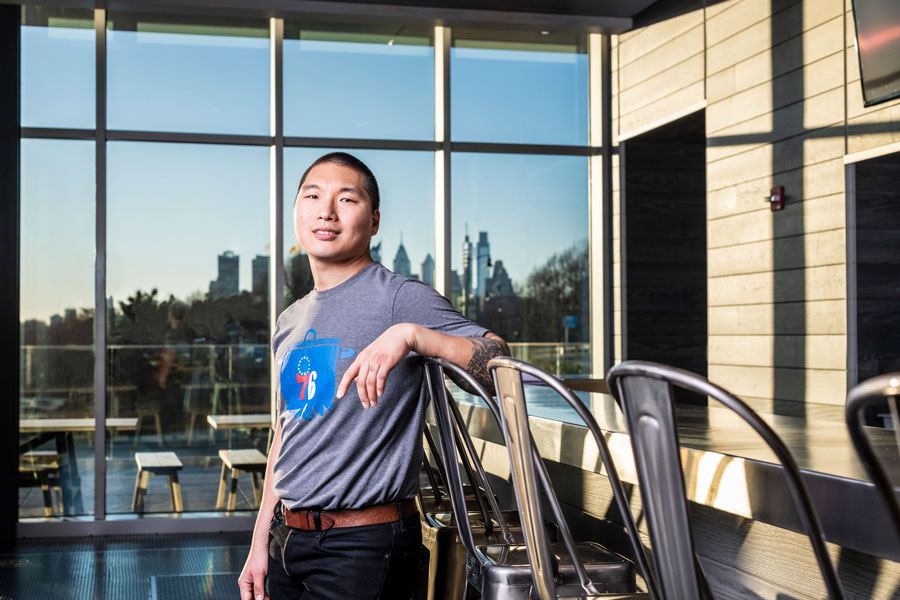 In the chef world, Cho is an anomaly, because the apex of his career isn’t his own restaurant. It isn’t a spread in Bon Appétit or appearances on the Food Network. What put his name on America’s culinary map is essentially a corporate gig: The 35-year-old is the executive chef of the Philadelphia 76ers and has helped to solidify our team’s rep for a nutrition program worth emulating.

You’ve done stints at Serpico, Pub & Kitchen, the Dandelion and Parc. What took you from some of the city’s finest kitchens to the 76ers’ practice facility?

It was a chance meeting with Bryan Colangelo, the former president of the 76ers. He was at Parc, eating with Jerry, his dad [and former owner of the Phoenix Suns], and I just happened to be in the kitchen wearing a Phoenix Suns cap. I told one of the runners to let him know, that he’d get a kick out of it. And that’s how it all started.

I thought that was sort of going to be it, a really cool story: I met the Colangelos, basketball royalty. But then that turned into Bryan and his team trying to recruit me. They actually started coming into Parc and asking for me and chatting, and then it kind of went from there. Eventually, we did a tasting and interviews. A lot of things had to happen in a certain way for that encounter to happen.

Last year, an ESPN article said that you run the “most comprehensive, sophisticated and well-equipped food program” in the NBA. Where’d the vision for it come from?

At the very top of the Sixers organization, you have individuals from really elite, high-performing environments. Coach Brown from the Spurs and the Harrises and the Blitzers from the finance world — they all come from places where the environment in which the work happens informs and contributes to the quality work that gets done. So I think it was a meeting-of-the-minds situation.

I’m sure there was a kernel or idea that sparked it: “Why can’t we just have a five-star restaurant here? Why does it have to look like a cafeteria? Why can’t we sit down and be served?”

What sets your food program apart from others in the league?

The team’s doctors and nutritionists make sure all the players are getting their macro needs. It’s very collaborative. They’re letting the culture be built around flavor and seasonality and food rather than being built around fueling. I feel like any sports scientist or psychologist would tell you how valuable that is in the long run for performance.

Did you run into any hiccups when building the program?

Too many to count. But the biggest failure at the beginning was that we wanted to be a bunch of different things all at once, when really it should have been a more gradual process — a crawl-before-you-can-walk situation.

Our vision was way more ambitious than we had the bandwidth for. But we are getting to that sweet spot where we have a really good thing going, and now we can work on expanding. It is pretty normal and typical for a restaurant.

What is it like to be in such a high-profile and powerful position?

The best chefs I’ve worked with are the ones who exhibit self-control. Because when you think about power, you think about influence. I think the best leaders in this industry ask themselves, “How do we control ourselves in response to these external inputs?” It guides how you move through life and hones and sharpens our innermost thoughts and emotions. When those are sharp, then we can influence with a little more understanding.

Published as “JaeHee Cho” in “The New Look of Philly Power” in the April 2019 issue of Philadelphia magazine.