5 Takeaways From the 2019 Philly Chef Conference

This year's culinary convening at Drexel University highlighted chefs creating healthy workplace culture, thinking about ingredients in new ways, and stepping outside the kitchen to support their communities. 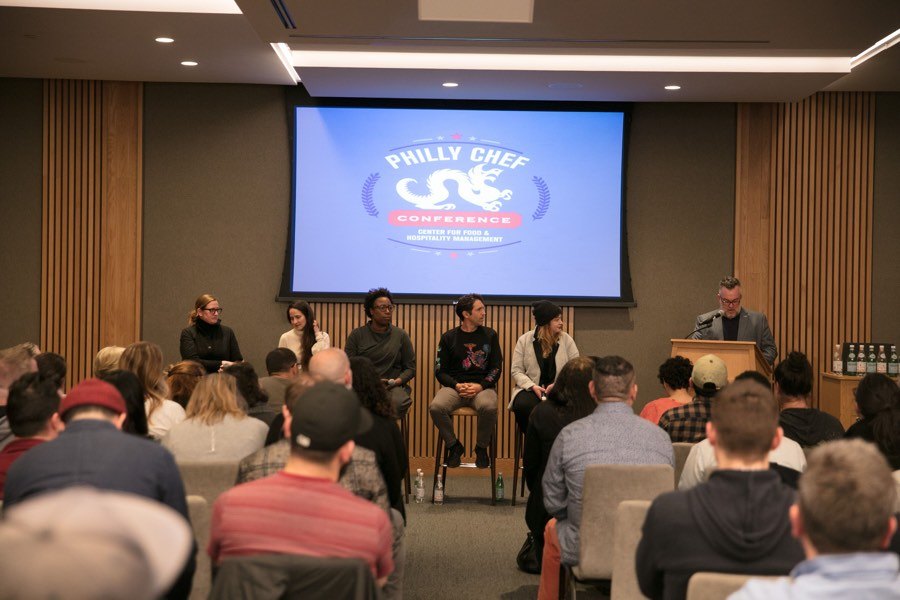 This weekend, the Philly Chef Conference brought hospitality professionals from the city and around the world together for a few days of discussion, education, networking, and, of course, great food at Drexel University’s Center for Food and Hospitality Management. Here are the highlights from this year’s discussions, from big name chefs talking mental health and work-life balance to an update on reporting on the restaurant industry in the age of #MeToo.

Now in its sixth year, the Philly Chef Conference has some serious pull in the national and international culinary community.

While the conference has always featured culinary professionals doing great things in their field, 2019’s roster of presenters featured some of the biggest names yet. There were not one, not two, but three chefs with Chef’s Table episodes about them featured at the conference: Ben Shewry, whose restaurant Attica in Melbourne features and educates diners about Australia’s Indigenous ingredients and foodways; Mashama Bailey, who was nominated for Best Chef in 2018 by the James Beard Foundation; and our own Cristina Martinez, who served barbacoa side by side with Alejandro Paredes of San Antonio’s Carnitas Lonja. And some of the hottest names in food media right now — the New Yorker’s Helen Rosner, Splendid Table host Francis Lam, and cookbook authors Nik Sharma and Julia Turshen — moderated panels on chef memoir, the state of food media, and cookbook development.

The next big trend in restaurants? Creating a positive, supportive, and balanced work environment for staff.

The conference proper began on Sunday with panels open to the public. Only the first evening panel — a discussion on finding balance in the restaurant industry with Michael Solomonov, Bay Area chef and activist Reem Assil, and Food & Wine editor, author, and Chefs With Issues founder Kat Kinsman — was explicitly about ways that chefs and restaurateurs can create healthy workplaces that are fair and supportive rather than exploitative and abusive, both for workers and for management and owners.

But the second panel, “Improving on Perfection in the Restaurant Industry: A Discussion on How Not to Sit on Your Laurels” — whose title at first seemed to reinforce the 80-hour-workweek, ride-or-die kitchen ethos the previous panel’s speakers reject — headed in the same direction.

Bailey talked about how after a two-decade career, she hadn’t really been able to let herself step back from work and allow herself space until a recent surgery forced her to do so for several weeks. Shewry described “staff speeches,” a regular staff meeting at Attica in which employees present about anything they want, as long as it’s positive and personal, to ensure that employees who don’t work directly together get the chance to know each other and connect. Genevieve Gergis, owner and pastry chef at Bavel and Bestia in Los Angeles, described using Instagram to spotlight the hardworking cooks who turn out desserts in her kitchens.

And on Monday, while moderating a panel on improving kitchen culture, Food & Wine editor Hunter Lewis revealed that a new industry-focused vertical, Food & Wine Pro, will feature a list of the best restaurants for food professionals to work in later this year. Expect to see more on work-life balance, mental health, fair hours and wages, and preventing and educating around workplace harassment in the hospitality industry this year.

The most innovative chefs are doing more for their communities than just cooking.

At a panel called “Stepping Off the Line: The Evolving Role of the Chef,” South Philly Barbacoa’s Ben Miller described how his wife Cristina Martinez’s personal struggles with finding and keeping work as an undocumented immigrant led to not only their acclaimed restaurant but also to activist work in support of immigrant communities under fire in Philadelphia.

Another panelist, Houston chef-restaurateur Chris Shepherd, founded of Southern Smoke Emergency Relief Fund. The nonprofit, which provides support to hospitality workers in financial straits, helped a pizza and wing joint owner who’d sustained brain damage in a motorcycle accident; when insurance wanted to kick him out of the hospital two days after brain surgery, his options were a slow end in hospice or $100,000 of rehab. Southern Smoke came through with the funds that saved his life.

An panel of food writers and editors discussed where the #MeToo movement, in which women across industries have come forward about their experiences with harassment and sexual assault in the workplace, stands in relation to the restaurant industry.

While Mario Batali has finally divested from (that is, received a huge sum of money for his shares in) his restaurants, nearly all other high-profile men in hospitality who have been accused of harassment and assault in their workplaces, like John Besh in New Orleans and the Spotted Pig’s Ken Friedman, remain in place and continue to benefit from business done at their restaurants.

Journalist Priya Krishna said it simply: with so many unsung chefs to write about, why should we continue to write about chefs who harass their staff or abuse their partners? Eater restaurant editor Hillary Dixler Canavan, whose publication has chosen to stop covering businesses run by harassers, cautioned attendees not to rush to an unearned conclusion. “This push for redemption is an Act III thing, but we’re still in the gray, knotty, thorny Act II of this story,” she said.

Philly chefs hold their own among some of the best in the country.

For the first time, the Philly Chef Conference featured food from chefs outside Philly during post-panel receptions and lunch breaks. Moderator and conference fixture Jeff Gordinier of Esquire brought along a crew of chefs from his Best New Restaurants list, including Hai Hai in Minneapolis, Carnitas Lonja from San Antonio, and Petra and the Beast in Dallas, to share their fare alongside the locals.

Everything we tried from them was delicious — but we still couldn’t get enough of the Love’s savory mushroom toast, Hardena’s gado gado, Kevin Sbraga’s hot chicken (a conference treat the last two years), and Suraya’s sweets, just to name a few.

We’ve always appreciated the way that Drexel’s Center for Food and Hospitality Management brings national and international culinary experts to the conference each year to share knowledge, make connections, and see for themselves how great our dining scene is. As we look forward to the 2020 convening, we’d love to see the list of speakers look a little more like the list of options for Monday’s lunch, with a few more Philly chefs sharing their knowledge and stepping into the spotlight.