Where to Get Fastnachts and Paczkis in Philly on Fat Tuesday

These deep-fried treats are a Pennsylvania Dutch tradition on Mardi Gras, which falls on March 5th this year. 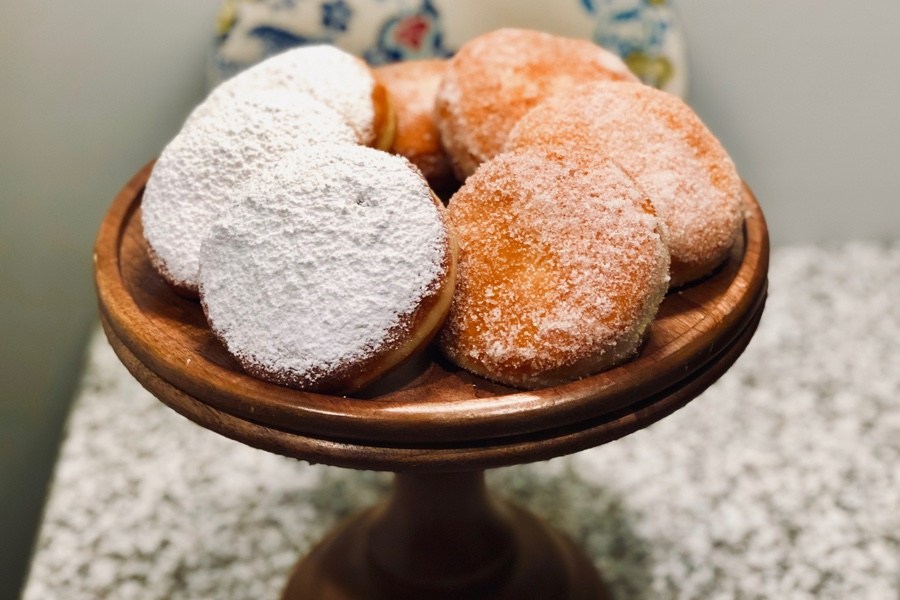 For some folks, next Tuesday, March 5th is Mardi Gras, also known as Fat Tuesday — so named because you’ve got to use up the rich ingredients like eggs and butter in your kitchen before the fasting period of Lent starts the next day. Whether or not you give up any goodies for Lent, Fat Tuesday in Philadelphia means fastnachts, the often potato-based, donut-like Pennsylvania Dutch solution to this problem.

In the city’s historically Polish neighborhoods, it means paczki (pronounced “push-key”), which are filled, sugar-dusted rounds similar to a jelly donut. And one Philadelphia restaurant is even serving calas, a New Orleans take on the fried dough delicacy that’s made with leftover rice. Read on to find out where to get your Fat Tuesday treats on March 5th — and note that it’s a good idea to line up early or order in advance if you’re buying fastnachts for a crowd. 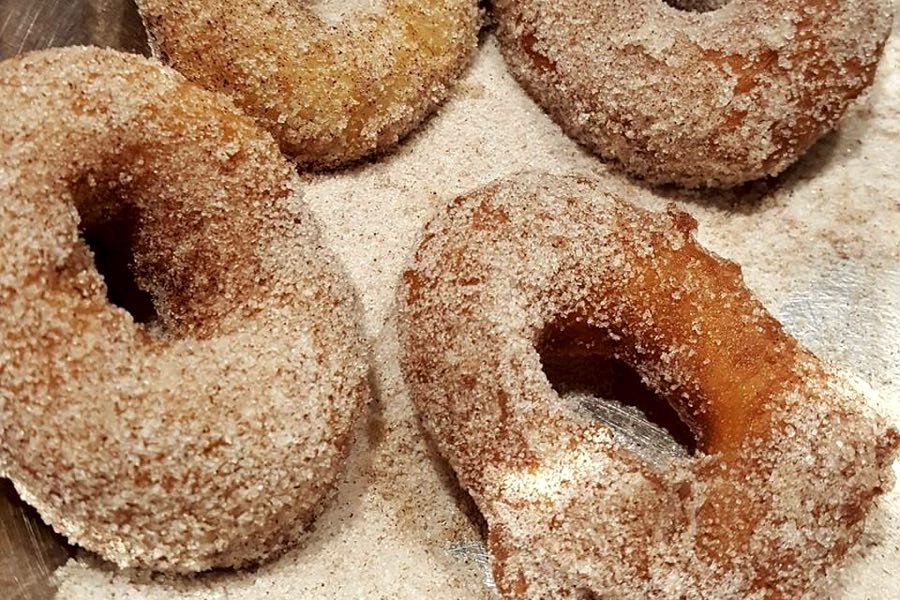 Beiler’s Donuts, Market East and University City
The Pennsylvania Dutch donut spots in Reading Terminal Market and on the Penn campus will be selling their traditional fastnachts on Fat Tuesday in plain, powdered sugar, and cinnamon sugar, along with dozens of their usual donut flavors.

EAT Café, Powelton Village
The mission-driven cafe is offering not one but two types of fried goodness for Fat Tuesday: calas, sugar-dusted fritters made in New Orleans with cooked rice and spices, and potato-based, Pennsylvania Dutch fastnachts in a traditional donut rather than square shape, dredged in cinnamon and sugar. They’ll be selling the fried pastries and coffee from 8 a.m. until 5 p.m. on Tuesday, March 5th, with a minimum order of a half dozen (you can mix and match calas and beignets).

Baltic Bakery, Port Richmond
Folks line up at this bakery for specialties like babka and crispy chrusciki on holidays, and Paczki Day is no exception. Get the jelly-filled Polish take on the treat there this Fat Tuesday.

Brauhaus Schmitz, South Street
At Philly’s destination for German cuisine, they start the fastnacht fun early, when Karneval begins (this year, that’s this Thursday, February 28th). Get your fix of fried goodness starting on Thursday evening, with fastnachts available through Tuesday, March 5th. 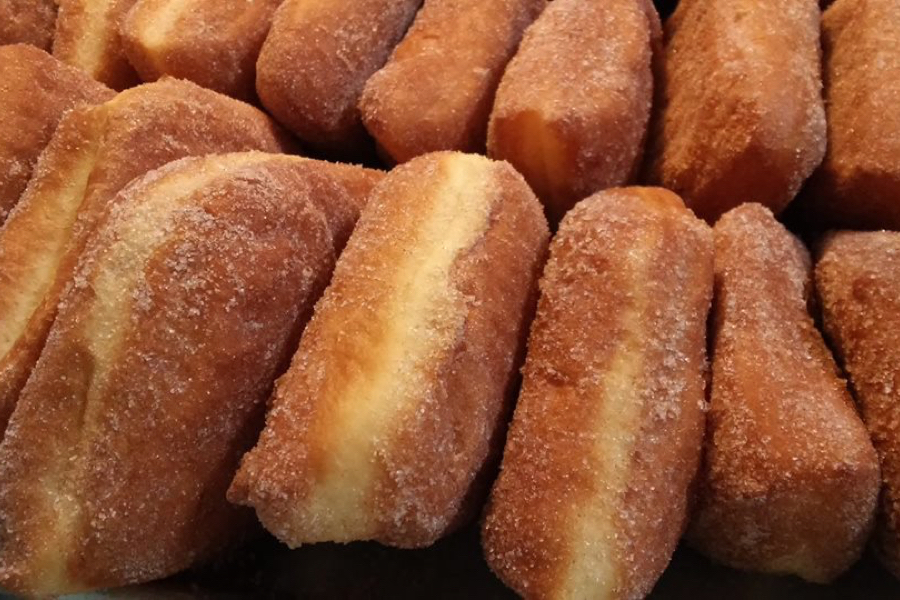 Century Bakery, Bridgeton
This South Jersey bakery has been owned by the same family for four generations. While they make donuts every day, it’s only on Fat Tuesday when they make fasnachts — square “good luck donuts” sprinkled with a little powdered sugar. Be sure to call and pre-order yours, because they always sell out.

Pierogie Kitchen, Roxborough
The expert dumpling makers at Pierogie Kitchen are getting their fry on for Fat Tuesday, with tender, golden-brown paczki filled with lemon curd, jelly, custard, or cream. They’ll have a limited quantity available for walk-ins, but your best bet is to call ahead and put in your order in advance.

Lochel’s Bakery, Hatboro
While they produce a deep menu of donuts all year round, Lochel’s busts out their special potato-based fasnacht recipe on “Donut Day” each year. Get them topped with granulated sugar, powdered sugar, cinnamon sugar, glaze, or nothing at all out of the case. You can special order ahead of time for fasnachts topped with vanilla or chocolate icing. (Conshohocken Bakery will have some of Lochel’s fasnachts on hand during Fat Tuesday, too.) 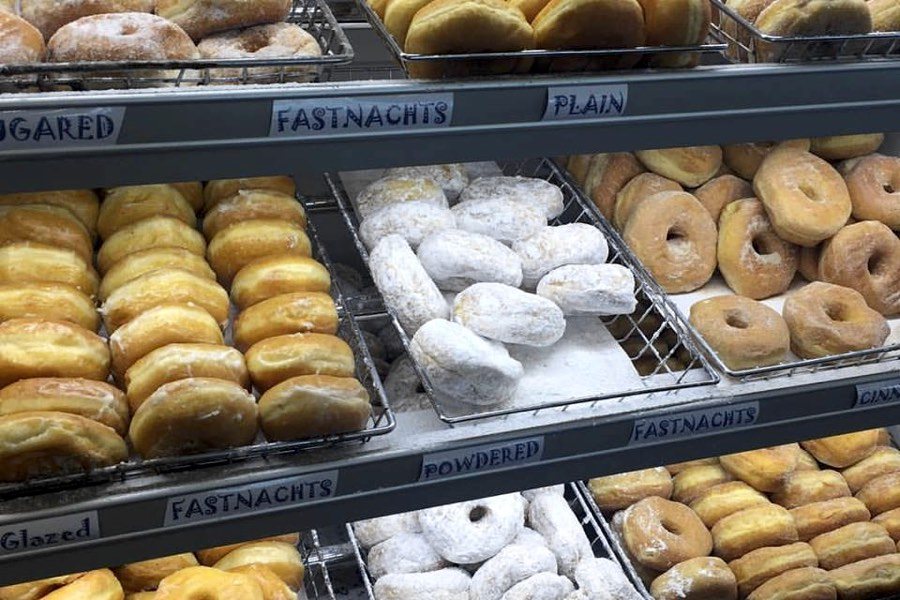 Yum Yum Bake Shop, Warminster, Colmar, Quakertown
This bakery uses a traditional potato-based dough for their fasnachts, available all day at their three shops on March 5th. Get them in glazed, powdered sugar, cinnamon, or plain.

Stock’s Bakery, Port Richmond
This Lehigh Avenue bakery is famous for their pound cake, but they serve their sugar-dusted fastnachts and other donuts on what they call Donut Day.

Crossroads Bake Shop, Doylestown
Without a fryer, these bakers had to improvise a way to make fasnachts — and now, they make “faux fasnachts” every year on Mardi Gras. They’re still square puffs of dough tossed in sugar, just a little lighter since they’re not fried.