Is it even a party if you don't leave with a favor? 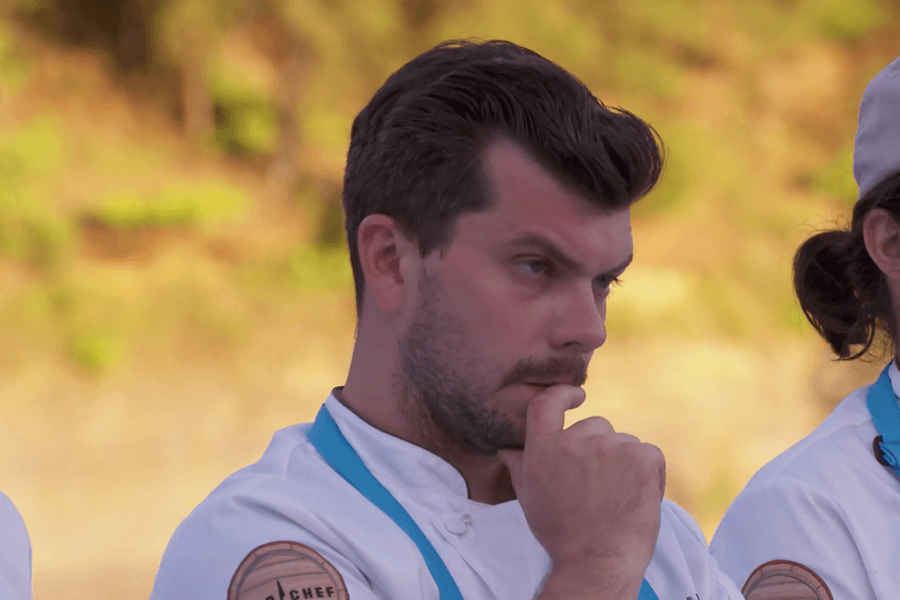 We have made it to the halfway point in the season. Please take a moment to pat yourselves on the back, as the rest of the chefs do to Eddie after winning the elimination last week. With ten chefs still gunning for the title of Top Chef, his odds are getting better, but it’s one dish at a time until the camera pans to Padma for those four special words.

No Quickfire this week, because the chefs are hitting the road. This way, they can tout the features of the new BMW X2 as stated in their binding contract that also reserves the right to use any and all camera footage, no matter how damning it may be. Their final destination is Lake Cumberland, the houseboat capital of the world, where they are split into two teams for a dueling boat party. Last week’s win allows Eddie to pick his team first, which is done by the highly selective and scientific method of whoever he makes eye contact with first. Not surprisingly (and because the producers probably told him who to pick), he winds up with some of the more reserved chefs (Michelle, Brian, Adrienne, and David), who take a food-forward approach to the challenge. Their opponents (Kelsey, Sarah, Eric, and Justin) view a boat party as just that, and their aim is to have a good time, which means gelatin shots, obviously (you can’t say Jell-O on because it’s trademarked).

Team Eddie gets off to a rocky start when their boat loses power and Adrienne catches the reality TV flu, but they power through as chefs do. Meanwhile, the party pants team gets drunk on “jiggle juice” while making a party favor called “puppy chow.”

When the power finally comes back on for Eddie’s team at 1 a.m., Brian spends the rest of the night cooking his porchetta, another ambitious dish from him. Adrienne is still no good the day of service, so she bails on the challenge altogether. Before the guests arrive, they try and get into the party spirit, but they are no match for team party pants, who won the people’s choice and the approval of guest judge Emeril Lagasse. Based on this elimination challenge and the last one, it would seem that Colicchio and company just want to get back to basics. Throw a party just means “throw a party,” and that’s what gave Kelsey the overall win.

As for the losing team, the main issue wasn’t necessarily bad food, it just happened to be neither fun nor interactive. They also lost power for the majority of their prep time, but when given the opportunity to use this as an excuse, they told the judges it didn’t affect their ability to execute (although I’m pretty sure it did). Pride can be a killer, as it was for Brian, who was sent packing this week for a porchetta that couldn’t hold its shape. As ridiculous as that sounds, it really bothered both Tom and Emeril, and so we’re down to nine.