Not enough lemon for one Philly chef to advance. 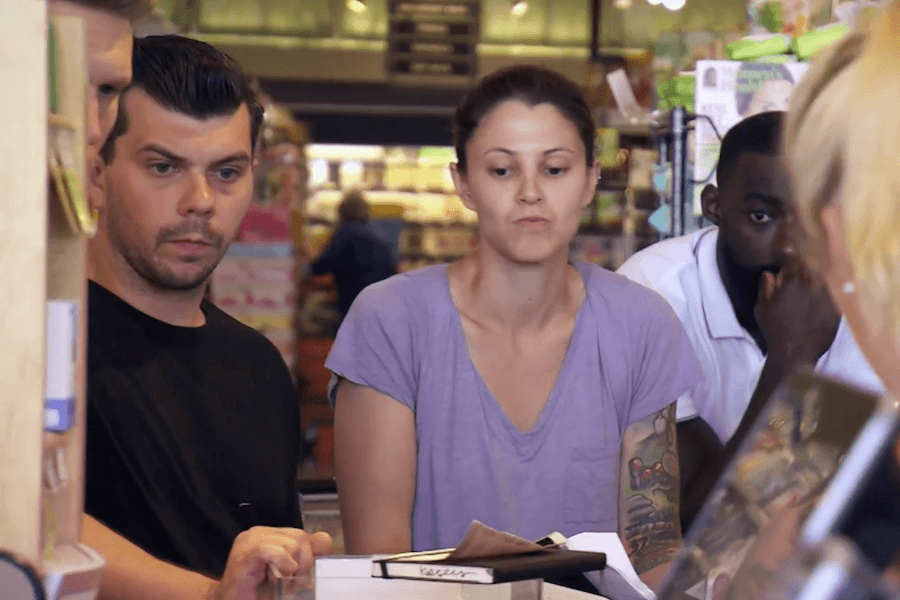 Welcome back to your new favorite part of Friday, folks. I am just as surprised as you are that we are already at week two, but we have no other choice than to indulge in the schaudenfreude that is Top Chef once again. What’s in store for our cheftestants in this episode? Other than psychological torture, probably bourbon (definitely bourbon).

We’ll build up to that, though.

First, the cheftestants do the slow-mo saunter into the Top Chef kitchen, where they are greeted by Padma, Nilou Motamed, and a TV screen. And what to their wondering eyes should appear? Why, a very pregnant Gail Simmons, to introduce the second Quickfire of this year! After rattling off a list of pregnancy cravings that aren’t really a departure from what most people crave all the time (red meat, spicy food, Middle Eastern food, Asian food, and lots of pasta), the cheftestants are given 30 minutes to make a dish based on these cravings. The two favorites will be picked and flown up to Gail who will make the final immunity decision AFTER the elimination challenge. This is the most extra Quickfire Challenge in Top Chef history.

Fake Cichonski (real Cichonski here) equates pregnancy cravings to the meal you want after working a 16 hour day. This makes no sense and I like this person less and less with every word that leaves his non-Cichonski mouth, but his dish — a bulgogi bowl with sushi rice and brussels sprout kimchi — is one that will be subject to Gail’s final approval for potential immunity alongside David Viana’s ribeye with corn chermoula and harissa red wine reduction. Nilou liked the “cuisson” of the ribeye, which is probably a new word for everyone watching (did I mention that this Quickfire was extra?). Thankfully, the producers at Top Chef were kind enough to put a subtitle at the bottom of the screen to let us common folk know that “cuisson” is a French culinary term that simply means “cooking”. Thanks, Bravo!

The cheftestants are then BMW’d to the Maker’s Mark distillery to get wasted and enjoy a crazy spread of Kentucky food that they will recreate in a team elimination challenge. Their budget is $1,500, which equates to $31.25 per person, which should be enough, right? Well, when one team spends over $500 on lamb alone, things don’t go exactly as planned. I think this is probably the first time in who knows how many years that the food budget actually mattered, but I appreciate the twist. With three full grocery carts left behind, Eddie’s team has to make things stretch. Poor Eddie, blower of the food budget, lord of the lamb, is riddled with guilt, and it doesn’t help that his team loses the challenge. Adding insult to injury, the judges loved his dish. If you look hard, you can see the ulcer slowly developing within him.

At Judges’ Table, the issue comes to light, but nobody’s a dick about it (it’s still early in the season and everybody still likes each other), especially since it was a lack of execution, not ingredients, that puts Maronski, Fake Cichonski, and Pablo at the bottom. Personally, I thought Fake Cichonski’s chicken and dumplings was the worst offender, but Colicchio found Maronski’s lemon curd to be lacking in its eponymous ingredient. After last week’s elimination win, she’s told to pack her knives, leaving Konrad to represent for us.