Can our two hometown heroes make it past the first week? 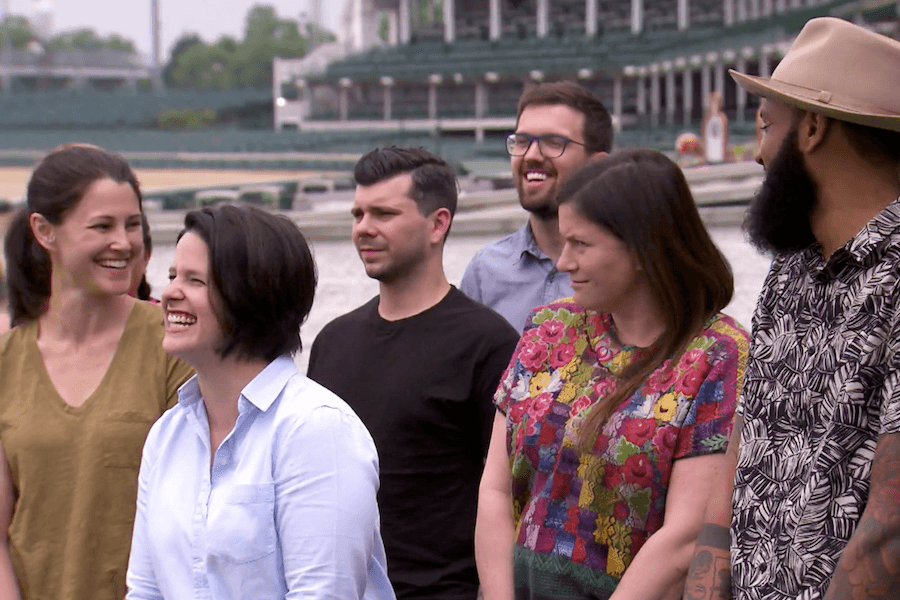 Welcome back to the time-honored tradition of the Top Chef recap. Now in its 16th season, the show is old enough to drive, and we’re all hopeful that it doesn’t send itself barreling into oncoming traffic because it was too busy scrolling through Instagram. Or worse, it happens to just plain suck.

Once again, Philadelphia is snubbed for another city (there are reasons for this, I’m told), so we find ourselves in Kentucky with 15 aspiring celebrity chefs including two of our own, Natalie Maronski and Eddie Konrad (we kinda sorta care about the rest of the pack, but only to the extent that we can make light of their appearance and/or on-camera personas. More on the faux–Jason Cichonski in subsequent recaps). The former is a protege of Jose Garces, and the latter is chef de cuisine at Nick Elmi’s Laurel.

And the first stop? Churchill Downs, home of the Kentucky Derby.

It’s a relief when we learn that the first Quickfire challenge isn’t to cook an old horse that’s just been put out to pasture. Instead, as an homage to the fastest two minutes in sports, the chefs are split up into teams of 3 and given two minutes to create a mise en place for a dish before losing knife privileges. After that, 20 minutes are spent losing ingredients and figuring out how to cut a steak with a pie server. Classic no-knife twist.

Our locals team up with Kevin Scharpf, an Iowan who claims to be part of something called the Midwest Movement. We hope for his sake that this is an actual thing. The three of them make a poached tilefish in a coriander and turmeric corn broth with fresh corn and herb salad. It’s more delicate than the other teams’ offerings, but it’s the lack of seasoning that puts them at the bottom of this first challenge.

Keeping the derby theme going (because what else is there to do in Kentucky besides this and bourbon?), Top Chef throws a Big Hat Party for 200 people. The teams established in the Quickfire will now be competing against each other for win, place, and show, because horses. Whoever winds up in last place will be up for elimination. The chefs can make whatever they want, so long as it doesn’t suck.

This means crudo or ceviche for the smart chefs, fresh pasta for the ambitious chefs, and a lazy ricotta and beet salad from Midwest Movement. Along the way, a few audibles are called (who forgets flour if they’re planning to make gnocchi?), leading to both happy and sad accidents. A bit of foreshadowing sends home Cincinnati chef Caitlin Steininger, who utters the dreaded words, “I can make this in my sleep.”

On the opposite end of the spectrum is our own Natalie Maronski, who takes the top spot with a laksa curry halibut ceviche. Colicchio loved the flavors and the technique, and guest judge David Danielson appreciated the cold preparation. If this is Maronski after being out of the kitchen for 10 months, the other cheftestants should be worried.

Until next week, folks.