Salt Bae Made a Cheesesteak, and We’re Here for It

We break down the viral celebrity chef's cheesesteak technique. 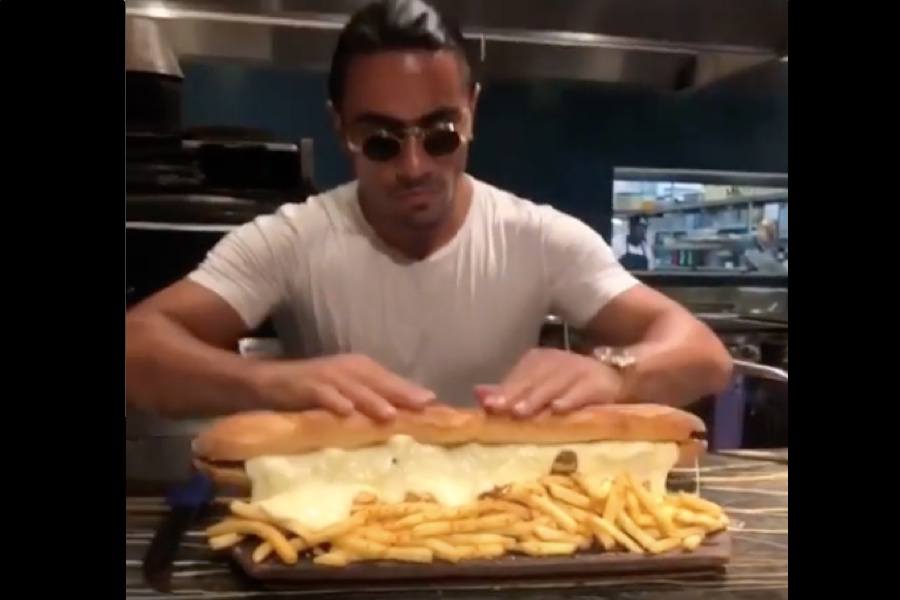 It was only a matter of time. Turkish-born chef-restaurateur Nusret Gökçe, a.k.a. Salt Bae, is known for viral videos of himself handling meat — flamboyantly butchering rib roasts and slicing up massive grilled steaks — before finishing them with a big pinch of flaky salt using his signature bent-elbow salting technique. In his latest video, Gökçe put his spin on a cheesesteak for his 16 million-plus Instagram followers. And we have to say, we’d eat Salt Bae’s cheesesteak.

The video, geotagged at the Miami location of his namesake Nusr-Et Steakhouse, has already racked up more than six million views since it was posted two days ago. In it, Salt Bae — with his trademark round shades, tight white T-shirt, and stoic expression — starts by slicing up a well-marbled slab of beef with a big, sharp knife and his typical flair. The cuts are relatively thick; there’s no chipsteak on this sandwich.

He slices and then caramelizes an onion with a fat knob of butter (thanks to the power of editing, this happens in a matter of seconds as opposed to the 40-or-so minutes caramelization takes in real time). Into the pan goes the steak, which he seasons with a gigantic pepper grinder in a rhythmic fashion reminiscent of Channing Tatum’s sexy workshop angle-grinding scene in Magic Mike XXL.

Next, Gökçe splits a crusty baguette — an acceptable substitute for an upscale steak when there’s no Liscio’s or Amoroso’s to be had — and lays on the meat and onions alongside a hedge of thick-cut, herb-seasoned fries. Then, he pours a luxurious cascade of melted cheese (we’re guessing provolone) over the whole thing before closing the top, slicing the sandwich in half, and lifting both pieces to show off the ultimate cheese pull. The dish is finished, of course, with his trademark salt flair.

And we have to say: it’s no Friz Wit, but that steak looks pretty damn good. Gökçe avoids the common pitfalls of non-Philly cheesesteaks (perfunctory ketchup, the accursed bell pepper, hoagie-fication) while fancying up the sandwich in a way that pays homage to its ooey, gooey roots.

Consider this an open invitation for Gökçe to come to Philly and find out if his cheesesteak can pass muster alongside the best in Philadelphia. We can see it on 9th Street now: Pat’s, Geno’s…#SteakBae?