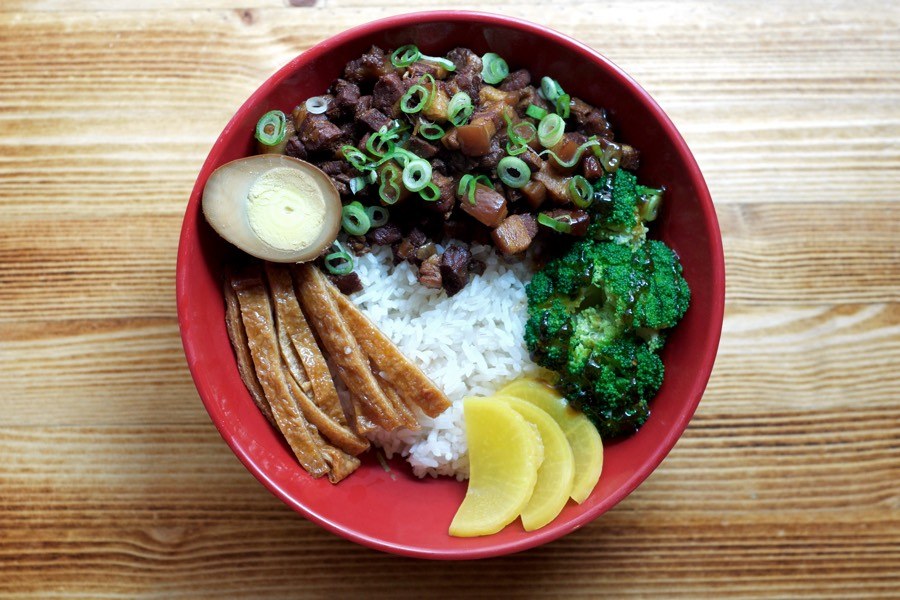 We here at Foobooz are always interested in what Philly’s best chefs are eating. So when Ange Branca, chef-owner at South Philly’s Saté Kampar, posted about Hakka Beef House, a new favorite of hers in Chinatown that opened earlier this year, I had to know more. I asked Branca if she’d be willing to give me an introductory lesson in Hakka cuisine, and she graciously agreed.

Branca is from Malaysia, and she cooks Malaysian fare at Saté Kampar, but her parents are both Chinese. Her father is from the Hakka clan, a cultural group that originated in northern China and whose nomadic movements have influenced foodways across southern China and Southeast Asia.

Before Hakka Beef House opened around six months ago, there was nowhere in the region for Branca to find the dishes she grew up with, so she’d cook them herself — a labor-intensive process even for a professional chef.

“Now, I come here,” she said. “It’s the most unknown Chinese cuisine in the world, but in my opinion the most important, because so many things come from it.”

We meet up at Hakka Beef House on a cool, cloudy day — perfect for the long-simmered soups we’re about to eat. The Race Street space is cozy but sleek and warmly lit, with a mural on one wall and jars of spices and herbs suspended on the other. Branca points out lotus seed, black cardamom, daylily buds, fig stems (to enhance the texture of soups), goji berries and red dates (to add sweetness). She confers with chef-owner Tom Liu over the menu — it includes some non-Hakka items, like scallion pancakes and egg rolls  — and orders the items they agree would best represent the cuisine. 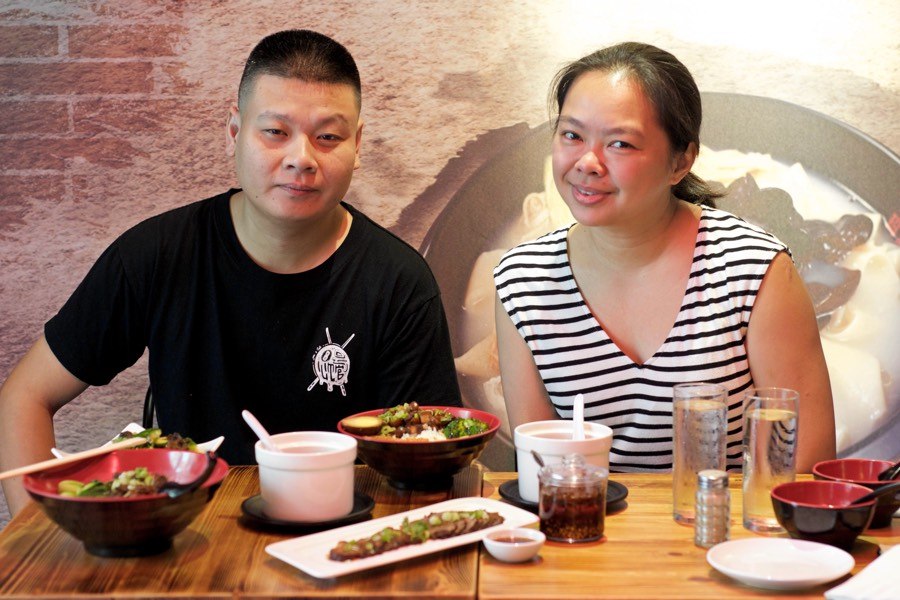 Hakka fare tends to be lighter than other Chinese cuisines available in Philadelphia, but it’s heavy on savory umami flavors. The defining traits of Hakka cuisine are practicality and economy, with an emphasis on using what’s available and preserving foods for longevity and portability; Branca offers country French cuisine as a Western comparison. That means fermenting vegetables and braising meats. These techniques help produce last beyond its season and make the most of tougher, cheaper cuts of meat, but they’re also key to developing deep flavors.

According to Branca, the umami-rich methods of curing, fermenting, and braising that show up in cuisines across Asia originate with Hakka; she points to cured fish and vegetables used to flavor soups in southern China and Hong Kong: “Chinese regional cuisines are all different, but anything that includes curing and that deep umami flavor is a take on the Hakka art.”

But Hakka slow-cooking traditions differ from European ones in key ways. “Texture is very important,” Branca tells me. But falling-off-the-bone tender isn’t what Hakka cooks are going for. Tough cuts of beef are braised with a variety of herbs, spices, and other flavors to tenderize them and develop umami, sure — but the meat is meant to hold its shape and keep a little bite. 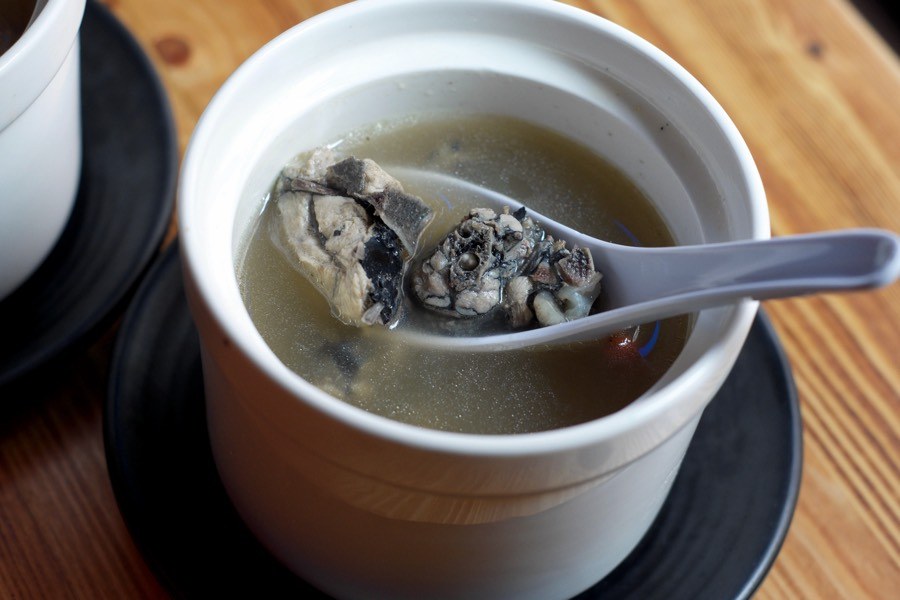 Liu starts us off with two small bowls from the menu’s “Herbal Diet Stew Pot” section, which Branca clarifies means “medicinal” in this context — food that’s particularly good for your health. One is made with goat (labeled “Mutton” on the menu) and the other silkie, a black-skinned breed of chicken with fluffy white feathers. The broth is clear but deeply flavored, with slices of ginger and angelica root along with tender hunks of meat meant to be eaten off the bone. 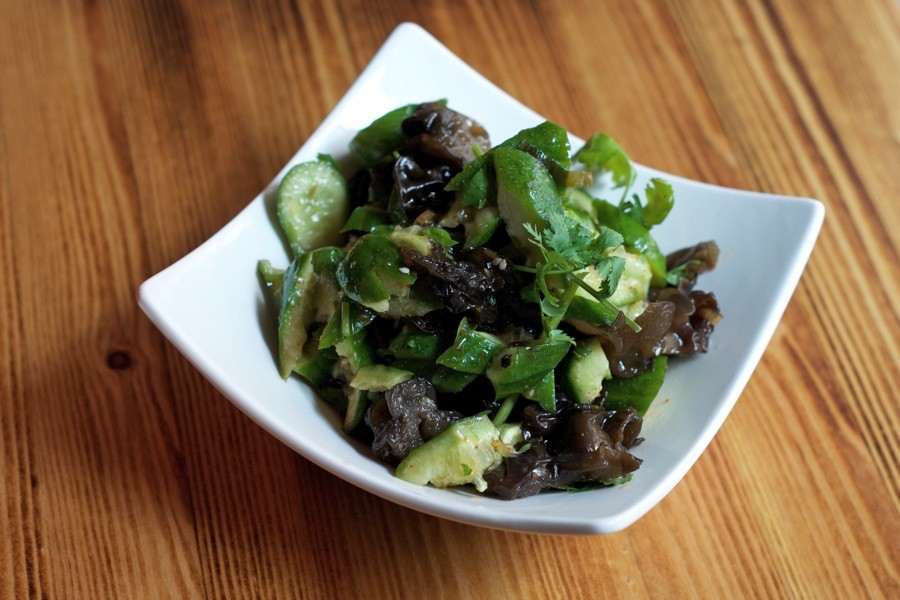 Next is a garlicky mix of crisp cucumber and toothsome wood-ear mushrooms (marked as “fungus” on the menu) and a platter of braised beef cuts, tendon and shank, to dip in a savory sauce. The thin, translucent slices of tendon almost look like bresaola; they’re warmly spiced and tender, with a little al dente resistance. 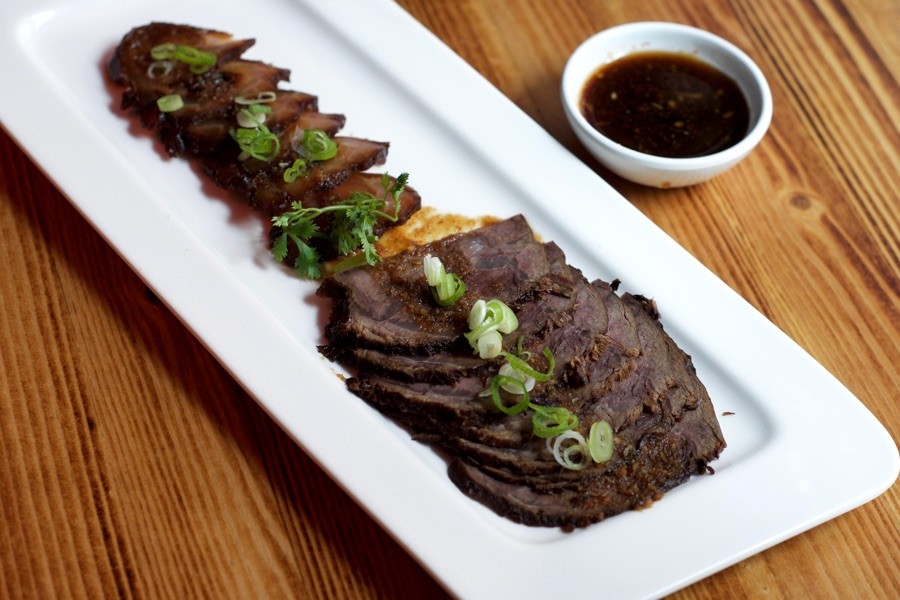 A bowl of braised beef soup with snappy Hakka-style noodles is assembled to order with baby choy, boiled egg, cilantro, and sesame — perfect for adding to your cold-season noodle soup rotation alongside ramen and pho. You can get the same toppings over rice, or try a combination with bits of braised and chopped pork, egg, and sweet-savory marinated yuba (also known as tofu skin), scallions, and golden-hued slices of pickled turnip. 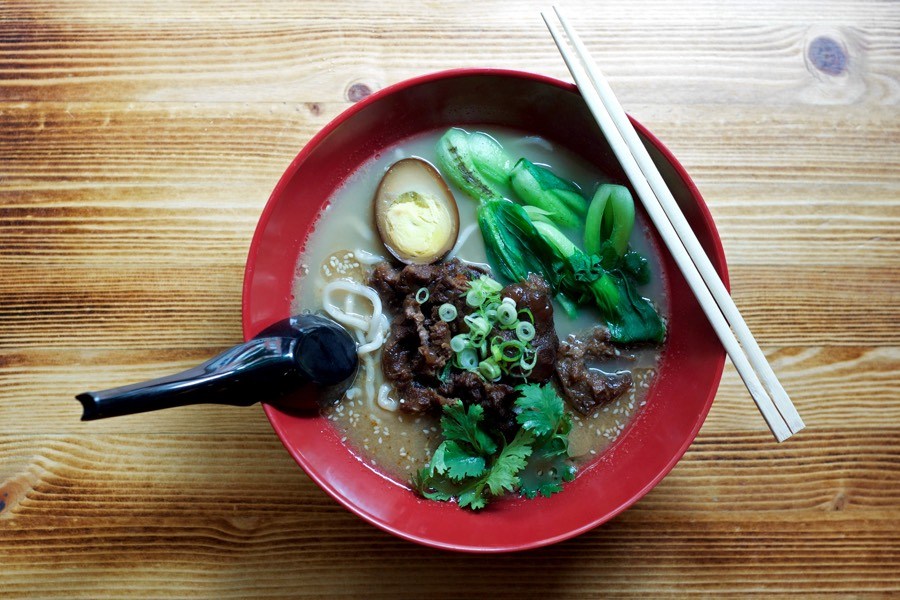 Branca also sees Hakka fare as an alternative to heavier, Americanized Chinese food that diners often think must be cheap by nature (the prices at Hakka Beef House are comparable with other sit-down spots in Chinatown). “If well-made food can’t be sold at the right price, it says a lot about our values,” Branca said. “We need to learn how to properly value well-made, wholesome Asian cuisines, which are available in Asia but not as much in the U.S. — not to want them to be as cheap as possible.” 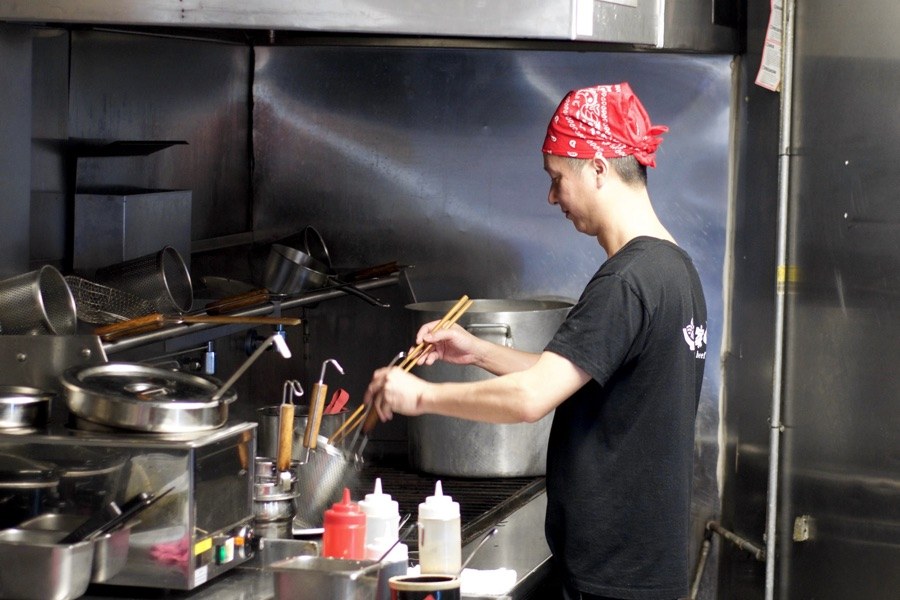 That ties into the relative rarity of this cuisine: one reason Branca sees Hakka food as uncommon in the U.S. is because it’s so labor-intensive. “It takes so much time to make this food, to braise this meat, and effort to visually put it together,” she explains. “Every part of the dish is cooked separately, and then those flavors and textures are combined. You’re not just putting everything in a pot — you’re paying attention to a lot of texture details, flavor details.” That’s why it’s mostly made at home, she says — because if it’s not a labor of love for your own family and friends, it’s hard to justify putting in the work.

“Growing up Hakka, I had the luxury of tasting all these well-made, flavorful foods, and I know it’s not easy to make,” Branca says. “That’s why it’s so important to me.”

All the more reason to eat there now. You can hit up to Hakka Beef House at 927 Race every day between 11 a.m. and 10 p.m. Check out the menu below (click to embiggen). 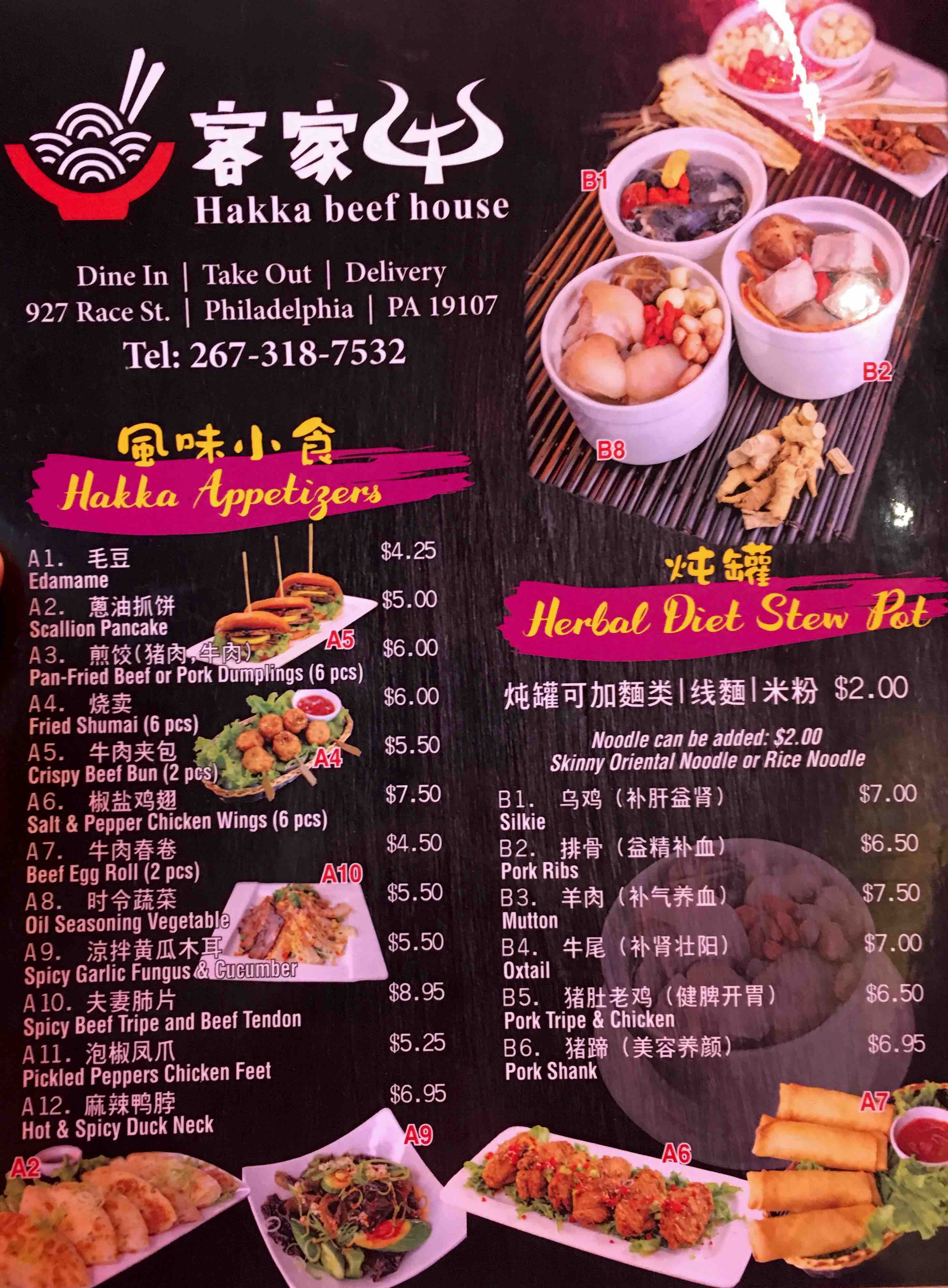 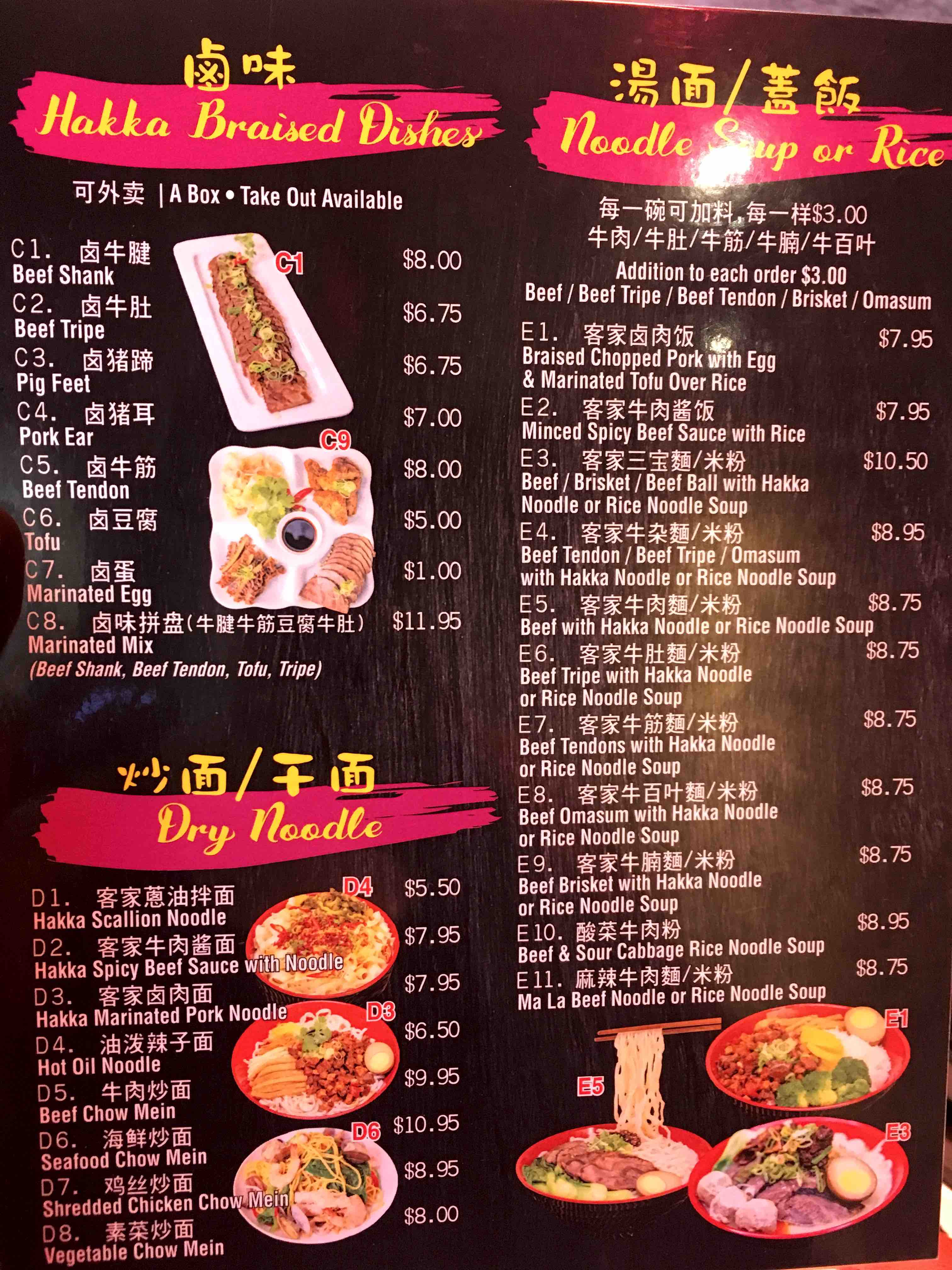