Both bottles are now available at both of the Manatawny tasting rooms. 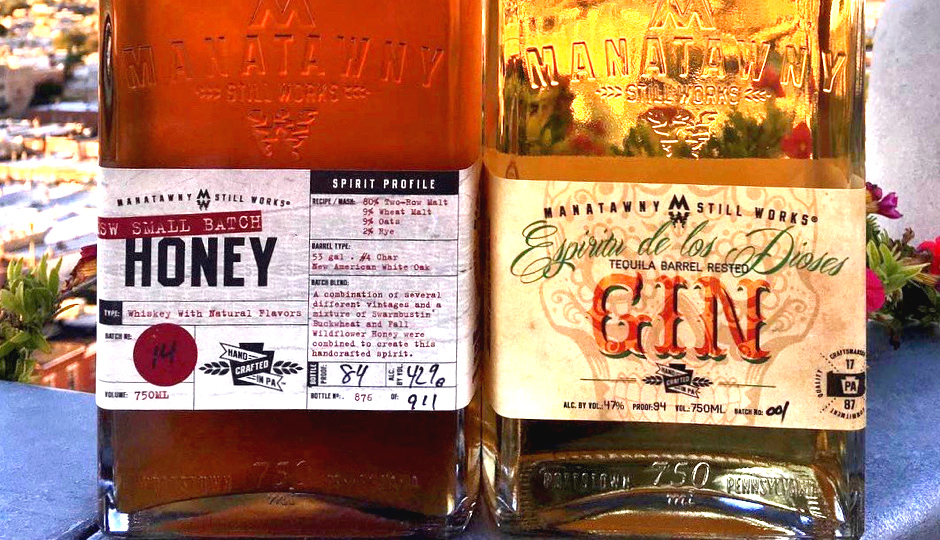 But there are some extremely rare exceptions to this. There’s a mezcal I love that’s filtered and purified by throwing raw chickens into the vat. It doesn’t make the mezcal chicken-flavored or anything, but I’m just saying: that’s the level of fuckery I’m willing to tolerate. If you’ve got some weird idea that actually makes the spirit in question better? Go for it. But if you start adding liquid smoke, blueberries or Jolly Ranchers to your booze, forget it. You’re dead to me.

So the folks at Manatawny Still Works were really walking a line with me when they released a couple of new bottles recently. The first is a honey whiskey (which, like the chicken thing, I’m okay with because whiskey and honey go really well together). The second is a gin aged in tequila barrels, which I was very much not okay with. Until I tasted it.

Let’s talk about the honey whiskey first, because it’s the less controversial of the two.

It’s called Batch 14 and was done in collaboration with Chester County’s Swarmbustin’ Honey. Manatawny does a lot of limited-edition, small-batch experiments. They allow head distiller Max Pfeffer the chance to mess with the variables of the distilling process (mash bill, aging time, blah blah blah) without risking the consistency of Manatawny’s core products.

In this case, Pfeffer wanted to do a honey whiskey (because honey whiskies are awesome), and he wanted to do it with a local product that he knew and trusted. He blended a bunch of Swarmbustin’s buckwheat and fall wildflower honeys together, added it to a blended whiskey adjusted to have some serious bite, and ended up with an oddly cloudy spirit that you need to shake before pouring.

The flavor is unexpected — not overly sweet, but just enough to take some of the woody bite out of the front, then dissolving into a nice burn that reminds you you’re actually drinking whiskey. The aftertaste is complex with honey florals, and not exactly clean, but as a sipping whiskey, it works. Complicated to use as a mixer, but I also think that mixing would kill what’s special about it.

Then there’s that freak-ass gin. The gin that should not be. A gin which I have never heard of anyone trying before because, seriously, who would? It seems so strange just to say it out loud — barrel-aged (which is unusual enough for a gin, even though you see it more and more these days) in tequila barrels.

Here’s my problem: I love gin. And I am quite fond of tequila. But I love gin for its gin-ness and tequila for its tequilosity, right? Never once have I finished a Hendricks’s G&T, smacked my lips and thought to myself, “That was nice, sure, but you know what it needed? A sidecar of Patron.”

Because that would be ridiculous. Gin is gin — powerful and herbal and not for everyone. And tequila is tequila — stony and harsh and always there at the start or end of all your best bar stories.

Except, apparently, I am wrong about all of that. Because the first time I tried Manatawny’s Espiritu de los Dioses tequila barrel aged gin, straight from the hand of a Manatawny rep, I finished it, cleared my throat and asked if it would be okay if I quit my day job and came to work for them.

No, seriously. I’ve never tasted anything quite like this stuff. If I had to give the flavor a ratio, I’d say it was 80% gin (the botanicals gentled by the aging process, the juniper muted), with a hot, smoky, woody, almost vanilla-ish 20% tequila riding on top. The weirdest thing about it is that it felt like a complete spirit — not something that had just been cooked up in Manatawny’s distillery by a bunch of mad scientists willing to break all the most fundamental laws of distilling, but something that has been around for centuries. A missing link in the white spirits genome, filling the gap between gin and tequila.

It’s not a stunt liquor. It’s not distressingly punchy or deliberately bizarre. It’s just one of those rare things which, when invented, seems to fill a hole in the universe that you didn’t know was there until the thing that filled it came along.

Both bottles are now available at both of the Manatawny tasting rooms (in Pottstown, at the distillery, and at the new spot on East Passyunk). The Batch 14 will run you $44.99 a bottle, and the Espiritu de los Dioses gin-quila is a steal at $42.99.