Where to Eat This Weekend: Let’s All Go to Chinatown

Noodles, pancakes, roasted duck and soup dumplings. Who's with me? 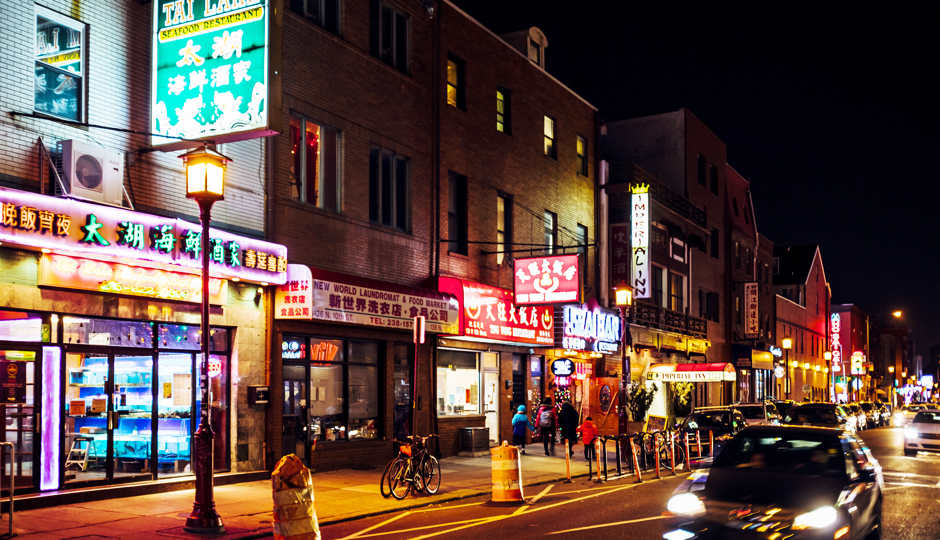 It feels like that kind of weekend, doesn’t it? All of us at Foobooz World HQ think so. There’s just something in the air (or something in our appetites) that makes us yearn for slick streets, neon and some roasted duck.

So we played a game. We said if we could forget all the places that we need to eat at (for reviews and lists and menu updates and everything else) and forget all the places that we’re supposed to eat at (because they’re new, because they’re weird, and because it’s our job), where would we want to eat this weekend? Specifically, what would we eat in Chinatown?

There’s nothing about this place that’s not perfect if you’re haunting the streets of Chinatown late. It’s BYO. There are private karaoke lounges if that’s your jam. And in the dining room, there’s strange lighting, white tablecloths and a menu full of dependable, fiery Szechuan food. Basically, if you see the word “spicy” used in the menu description, you should order it. But if that’s too adventurous, just go for the giant plate of spicy crawfish. And make sure you’ve got some cold beers with you to wash it down.

Hidden away like it is on the far corner of Chinatown (it’s kinda behind that giant parking lot), Terakawa gets overlooked far too often when people talk about this city’s great noodles. Well no more. This place specializes in recipes from the Kumamoto region of Japan, takes 2 days to make its broth, hand-rolls its own noodles, and serves two things that you absolutely have to eat this weekend. The first are the Japanese sausages with spicy mayo because you get four of them for $5, they’re the perfect snack, and just the phrase “Japanese sausages” sounds so bizarre when you say it out loud. I didn’t even know Japan HAD sausages until recently. Second, the namesake Terakawa ramen made with Berkshire pork bones, bamboo shoots, kikurage mushrooms, roasted pork and an egg.

Yeah, that place with the ducks hanging in the window. Know why those ducks are there? So you can eat them. Go simple. Just ask for some roasted duck, a few pancakes on the side, and dig in.

All the Dumplings at Dim Sum Garden

No, seriously. All of them. Just sit down, start at the top of the menu, and don’t stop until you hit the bottom. If you haven’t got that kind of time (though, really, that’s basically my dream dinner), go for the steamed pork soup dumplings. The pan-fried version is easier to eat, but loses points for texture. And the pork-and-crab is good, but seems almost like overkill. Pair it with two orders of the shrimp shumai, some turnip cake and maybe some bok choy for greenery and thank us on Monday.

These days, people’s understanding of Chinese food (particularly Szechuan food) is all about the heat. But you wanna know what’s an even more interesting flavor in Chinese cooking? Sour. And Xi’an (which cooks the food of Shannxi, where the cuisine is like half-Szechuan and half-Central-Asian), knows how to get that balance just right. Years back, our critic loved the place for its weird, black vinegar-spiked broth with cubes of pork fat, braised pork and baby onion shoots. Today, that dish is just as good.

Philly has two great places for scallion pancakes. Tom’s is one of them. It’s worth going just for three orders of them and nothing else. But since you’re there anyway, ask the server what the special is for the day and just order it–no matter what it is.

Chinatown Square Food Hall for a little bit of everything else

There are like dozens of reasons to love this place. From the scorched Cambodian sausages at Khmer Grill to the pork belly and bo luc lac buns at Bao Bar; from eating poke bowls while you watch the high school kids from the neighborhood goof around in line at the rolled ice cream place to the busy moments when all the tables are full and you grab a seat on the stairs, feeling, somehow, like Philly is suddenly a better, fuller, cooler and more exciting city than you ever thought it was; from Korean tacos and chicken wing on a stick to really excellent Korean comfort food upstairs at Dae Bak where the pork soondubu with raw egg is almost guaranteed to be the best thing you eat all week–all of it is why we love it here. It’s convenient, quick and (mostly) cheap. It’s both laid-back and crazy-busy. It’s a place where everyone in the city comes together to share a meal. It’s everything that’s good about Philly. Plus, there are tacos.