Plus, he tells us what it was like to work at that circus known as the Farmer's Cabinet and why he doesn't mind making Cosmopolitans. 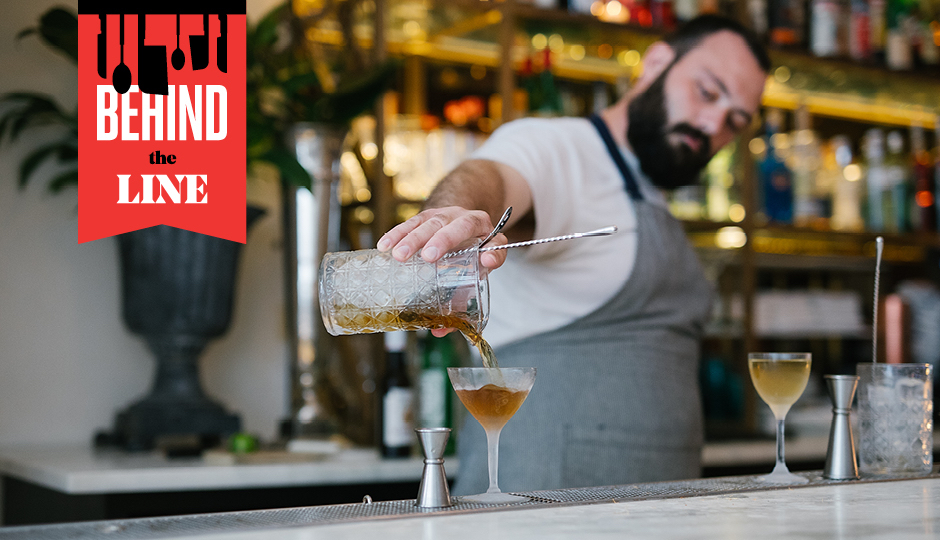 The last time we featured a bartender in Behind the Line, we spoke with Kelly “Waffles” Wolff from legendary Philly dive bar Bob & Barbara’s. This time around, we’ve gone about as far from a dive bar as you can get. Here’s our interview with Paul MacDonald from the recently-reimagined Rittenhouse Square boîte Friday Saturday Sunday, which claimed the #1 spot in our new 50 Best Bars in Philadelphia.

I’m originally from… Bethlehem, Pennsylvania. These days, I live in South Philly. East Passyunk, to be precise… where all the restaurant people live.

Working at the Farmer’s Cabinet was… instructive and memorable. [Laughs] I was there for a long time, and it was a good way to meet people and network and get my name out there.

Since Farmer’s Cabinet, I’ve worked at… Society Hill Society, which also no longer exists. It was in the former Artful Dodger space. It only existed for ten months. Cool space while it lasted but the wrong neighborhood for it. After that, I went to A.Bar for just under two years, and I left a year ago in November to open Friday Saturday Sunday.

The most popular specialty cocktail at Friday Saturday Sunday is… actually not on the menu anymore, but people still order it. It’s the Assassin’s Handbook, which is made with cognac, Jamaican rum, mulled wine shrub, Amaro Averna, and a little bit of habanero. It is enduringly popular.

The classic cocktail people order the most is… a martini. We make them however you want them, but my favorite way, and I sell these as often as I can, is two part Boodles to one part dry vermouth in a coupe with a lemon twist.

One mixed drink I prefer not to make is… a Long Island iced tea. I have all the respect in the world for modern classics. A drink like a Cosmo is maligned a lot, but it’s actually really delicious and refreshing. A Long Island iced tea is just supposed to be everything thrown in a shaker together.

If you’re wondering what happened to the big fish tank at Friday Saturday Sunday… it was taken by the guy who used to take care of the fish in the old place. This was a full reconstruction. They stripped this building down to the rafters and rebuilt it from scratch. 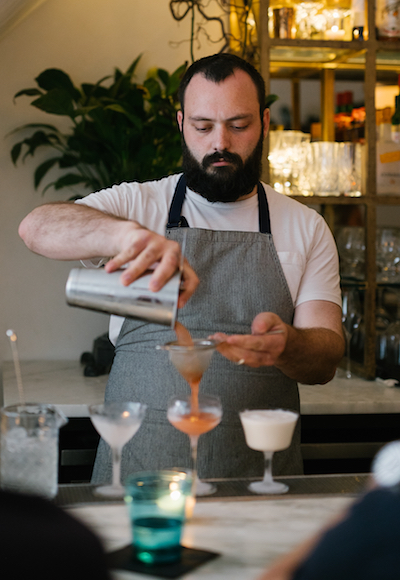 For my birthday, please give me a bottle of… wine. I drink mostly wine at home. A nice bottle of Txakolina from Basque, Spain. It’s a bright, high-acid white.

A bar tool I can’t live without is… a basic classic y-frame citrus peeler, about $4 each. There are so many variations on peelers from high-end supply companies that cost $15 or $20 or even $30. None of them are as good as a classic y-frame peeler from Fante’s for $4.

Cell phones at bars… are fine unless somebody is having a very loud conversation and not respecting the guests around them. And then the people placing cell phones face up on a bar where they are at risk from spills. That is always surprising and puzzling to me. If you’re going to put your cell phone on a bar top, you are taking it into your own hands.

One bar ingredient that everyone should have at home is… Laird’s Apple Brandy. It’s great to drink, my favorite to mix with, and it’s the original American spirit. Classic and absolutely delicious… and actually still owned by the Laird family in New Jersey. They have distilling license number one issued by the federal government, and they’re still making the same product they were making in 1780.

If you’re only going to order one food item at Friday Saturday Sunday, get the… roasted chicken. I know, I know. Everybody has to have chicken on a menu, but when you can cook a chicken and make it incredible every time… Our chicken is just gorgeous. The crispiest skin and the juiciest meat you can imagine. Beautiful.

The trick to a perfect martini is… plenty of high quality vermouth.

My favorite music to listen to while I’m working is… none. It’s a weird personality quirk. I’m a very active listener, and background music tends to distract me. As a general rule, I prefer to work in silence.

When I go out drinking, I never, ever order… anything from the entire range of anise-flavored liqueurs, whether it be sambuca, ouzo, pastis or absinthe.

My wife and I love eating at… Townsend. The food, the beverages, the hospitality, the space. Perfectly executed and conceptualized restaurant. That’s a hard balance to strike.

One bar trend I wish would die is… the word “mixologist.” It is a meaningless and pretentious word.

You can find me behind the bar on… Tuesdays, Thursdays, Fridays, Saturdays and Sundays.