My, how our tastes have changed over 20 years. 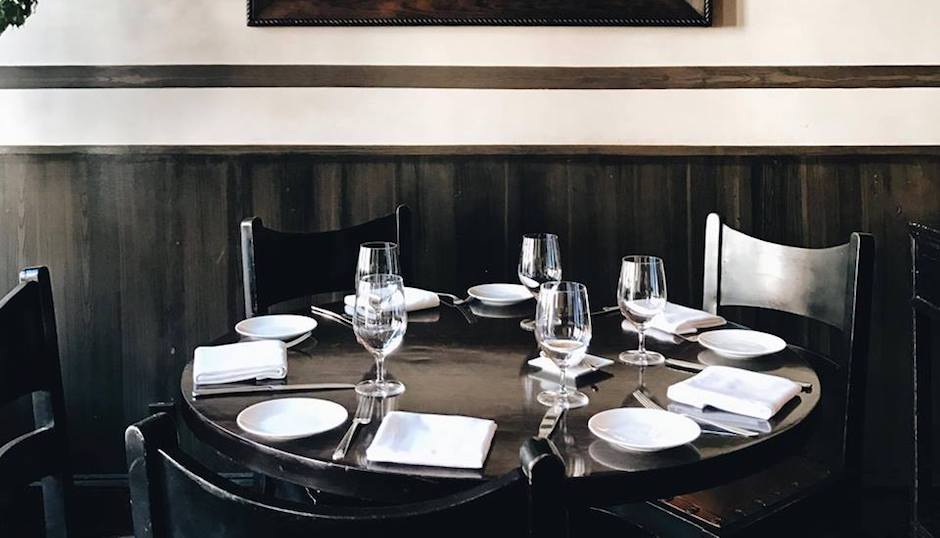 Pretty much everything you know about American dining has happened in the last 20 years.

Unless you lived in California in the late 80’s — unless you were a proto-foodie (with really good connections or really in-the-know friends) in San Francisco or L.A., or some New York grubnik sniffing around the edges of things and watching (from what would’ve been a fairly privileged position) the slow changeover from French fine dining to a more egalitarian, worldly model, everything that defines American cuisine now — from the New American/California Cuisine days forward — has happened in the past couple decades.

And Fork has been there for almost all of it.

Really. Ellen Yin opened Fork in 1997, long before Philly learned how to ace the post-gastropub, chef-driven neighborhood bar, long before the all-day cafes and bread programs and elevated fast-casual restaurants that we see now. She opened at a time when Le Bec Fin mattered and Fishtown did not — when “New American cuisine” (which, itself, was a second-chapter to the California cuisine revolution) was not the semantically null phrase that it is today and actually spoke to a fresh, light, seasonal and local counter-punch to the heaviness and rigid traditionalism of Continental cuisine.

And New Americanism was what Fork was all about. Grilled and smoked proteins, vinaigrettes and light sauces, a renewed focus on vegetables and house-baked breads and cooking traditions that weren’t French. I mean, check out this menu from opening night at Fork: October, 1997. 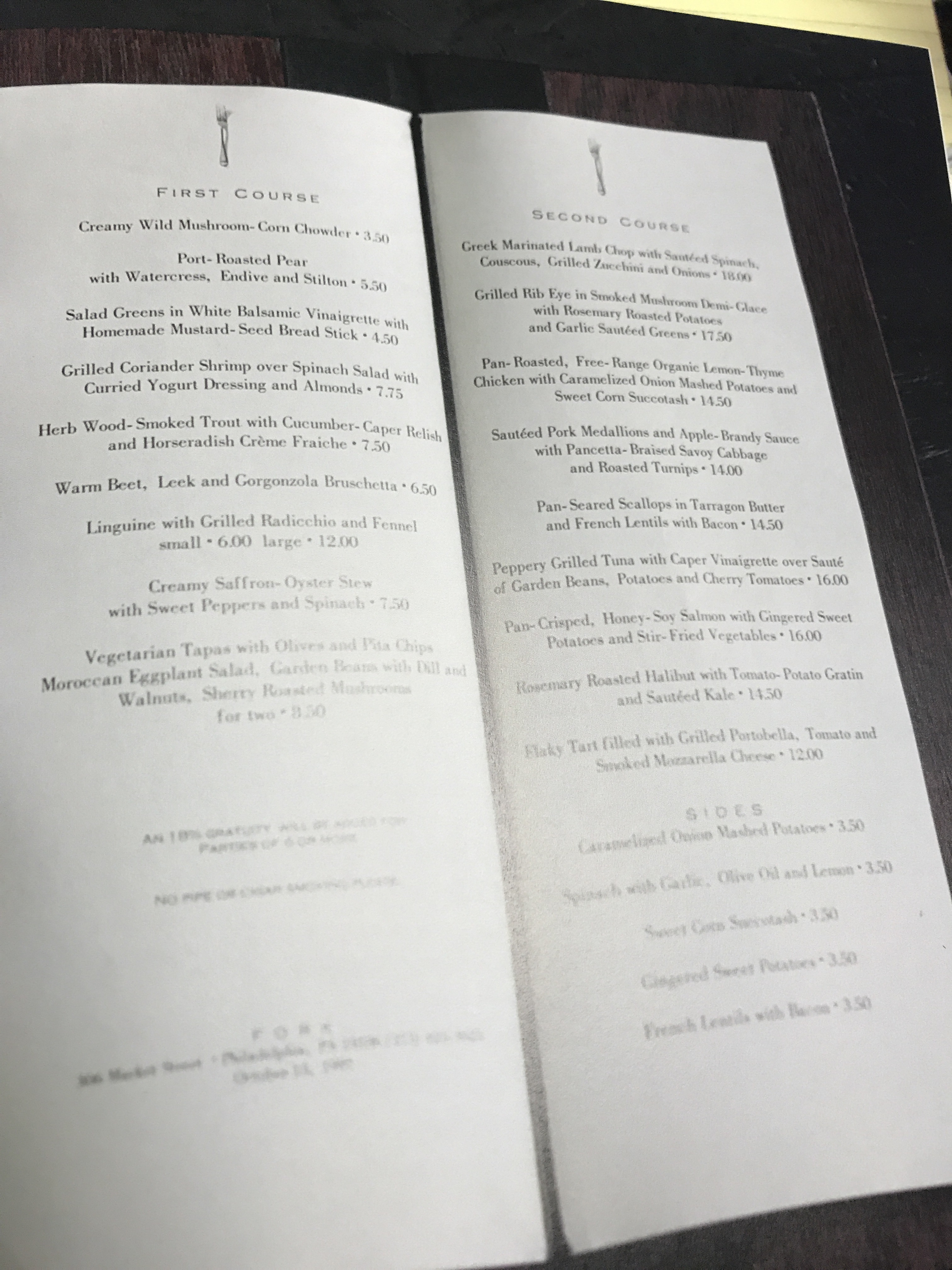 This is definitely not the molded salads and ham with pineapple rings of 1970’s American cuisine. Neither is it the steaks and bullshit Asian fusion of the 80’s. If you were there at that time (which I most certainly was, and still in the kitchens then, too), things like that port-roasted pear, the white vinaigrette, the grilled radicchio and the hold-over Asian flavors of the honey-soy salmon over stir-fried vegetables are indelible hallmarks of the age. They take you back. Add a cedar plank-roasted salmon filet and a rocket salad with a round of Laura Chenel goat cheese and you could give an entire generation of American cooks flashbacks to the best, weirdest days of their careers.

That menu represented how Philly ate in that moment — a few seasons behind the most cutting-edge food cities, but well ahead of the rest of America. And for 20 years, Yin has hosted a series of wickedly talented chefs in her kitchen at Fork. These were professionals who knew how to translate Philly’s unique version of the edible American zeitgeist onto the page — rarely getting too far ahead of tastes, but never lagging into dull traditionalism either. Today’s menu still springs from those impulses. The salad greens come with a black rice vinaigrette now. Continental and Asian influences now share space with Middle Eastern flavors and Latin American ingredients. There’s more of a focus on handmade pastas (four now, instead of just one), breads and desserts, and the locality of the current menu is an example of how far our producers and neighbors have come. But Fork has existed on the cusp of New Americanism for its entire, storied existence — right from day one — and this menu is still a recognizable offspring of that opening day menu. It is true to its 20-year-old genes.

So now, Fork is celebrating with a 20th Anniversary menu that takes the best ideas from those old dishes and contrasts them with where Fork is today. Here’s how it looks at the moment (not the final version of the menu, but close). 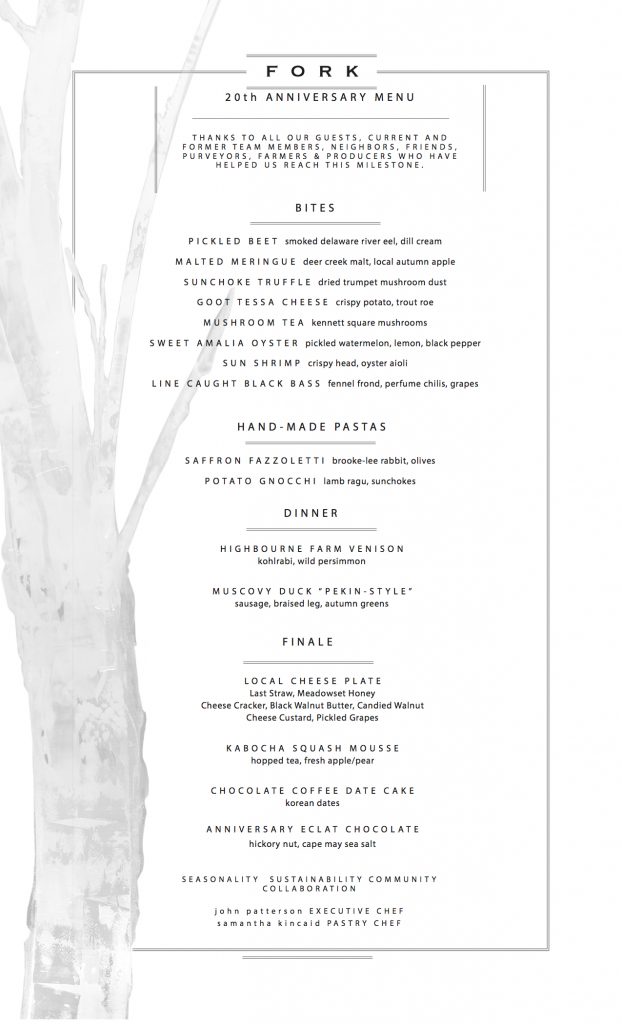 The tribute menu is being served at Fork for the anniversary celebration on October 15th, of course. But they’ll actually continue serving it through mid-November, so if you can’t make it on the big day, you’ll still have a chance to taste 20 years of Philly’s (and America’s) culinary history all in one place.