Here’s the Real Reason Why We Get Hungry Watching Football

Welcome to the first-ever NFL Food Bowl, featuring opposing teams made up of players with foods for names. 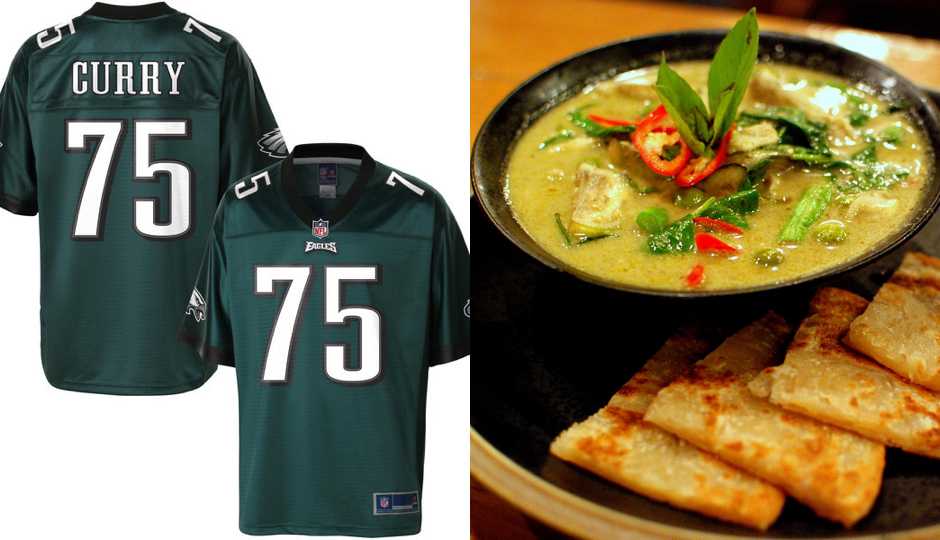 We finally figured out: Defensive end Vinny Curry was signaling our taste buds to crave chicken bathed in coconut milk and spices. Which got us thinking: What other foodstuffs might be playing around the league?

Herewith, our compilation (with notations) of the first-ever NFL Food Bowl.

On the line, Curry, of course, flanked by the Denver Broncos’ Peko brothers, Domata and Kyle. What’s a peko, you ask? Silly; it’s a kind of tealeaf. In the Food Bowl, spelling doesn’t count. And “food” is taken liberally. On the other end of the line: the Panthers’ Julius Peppers. Spicy!

In the backfield, from left to right: the Giants’ Eli Apple (a Philly native), the Chiefs’ Eric Berry (hey, he’ll be back next season!), the Panthers’ David Mayo (condiments count!) as middle linebacker, then the Browns’ Nate Orchard (always picked  first!) and the Panthers’ Corn Elder at, ahem, corn-erback. The two safeties? The 49ers’ Jaquiski Tartt (yum!) and Tampa Bay’s Keith Tandy, who maybe would only be counted as a food by Philadelphians with really long memories, but still.

On the line, two wide receivers, both from the Bengals: Cody Core on the left and A.J. Green on the right. We know, we know: a “green” isn’t a food. That’s why we have the Broncos’ Virgil Green playing tight end and Tion Green, from the Lions, at running back. Now we’ve got greens, right? And you surely eat those.

Also lining up behind Steelers quarterback Ben Roethlisberger? The Vikings’ C.J. Ham — duh. And on the offensive line, we have the Fisher not-brothers — the Chiefs’ Eric and the Bengals’ Jake — at guard, along with the Packers’ Jason Spriggs (as in parsley) and the Texans’ Kendall Lamm (homophones also count) at tackle. And finally, at center, the Vikings’ Joe Berger. See prior note.