The Decade-Long Fight Over Foie Gras Heats Back Up

Plus, dirty bread on the Great British Bake Off and shameful behavior at a Pizza Hut. 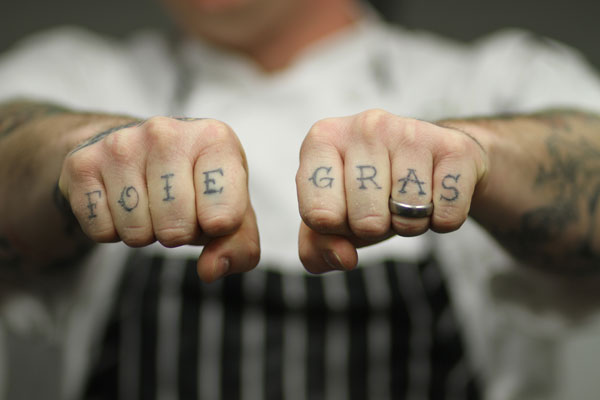 Welcome back to the world, everyone. It’s Monday, and that means we need to pay attention to the important things again. Important things like accidental penis bread, Pizza Hut evacuation procedures and post-disaster cooking techniques.

Oh, and also? California’s foie gras ban is back on. So let’s start off with that.

Because when you think law and order, you think California

California’s legal battles over the state’s foie gras ban go back more than a decade. The law was originally passed in 2004, and has been in and out of court ever since. As of last Thursday, it was legal to sell foie gras in California. And then the Ninth Circuit said that California was free to enforce the ban on Friday morning, which meant that it was illegal again. Except that an appeal was immediately filed, and the sale of “imported” foie gras (meaning foie not produced in California, which means all foie, essentially) will be allowed to continue until the appeal is settled. You can get all the details over at Eater SF, but the overturning of the lower court decision is not a good sign for those fighting for the rights of people to eat whatever they damn well please.

Okay, maybe it looks a little bit like a snail. Like a snail with some kind of glandular condition, maybe. But when a contestant on the Great British Bake Off tried to make bread shaped like a snail resting under a mushroom… Well, here’s how it turned out.

Foodbeast got a copy of a memo issued by a Pizza Hut location in Jacksonville, Florida explaining their policy on storm evacuations to the staff. It is just as draconian and cruel as you are imagining, but it’s the nuance that really matters. Of course they aren’t letting their employees evacuate until the storm is just a few hours away. Of course they’ll be disciplined if they don’t return to work within 72 hours. Of course they have to request time off for evacuating. But the part that really gets me? That management is couching all their bullshit in “needs of the community” language. As if the community of Jacksonville can not survive without a stuffed-crust pizza delivered immediately after the storm’s eye passes. As if the safety of the employees is less important than some macho fairy-tale image of Pizza Hut standing tall after the hurricane, distributing pizzas to the masses like mana. True, the bigger bosses at Pizza Hut came out with a statement shortly after this nonsense hit the interwebs which shut this shit down, but that doesn’t matter. First thoughts, first instincts, the official policy as it exists before the outrage–that’s the truth of things. That’s how Pizza Hut really feels about you.

They were talking about Hurricane survivors over at The Salt, too. But here, rather than a tale of corporate greed, it’s one of human ingenuity. Namely, how to make grilled cheese sandwiches on a metal storm shutter when it looks like the power won’t be back on for weeks.